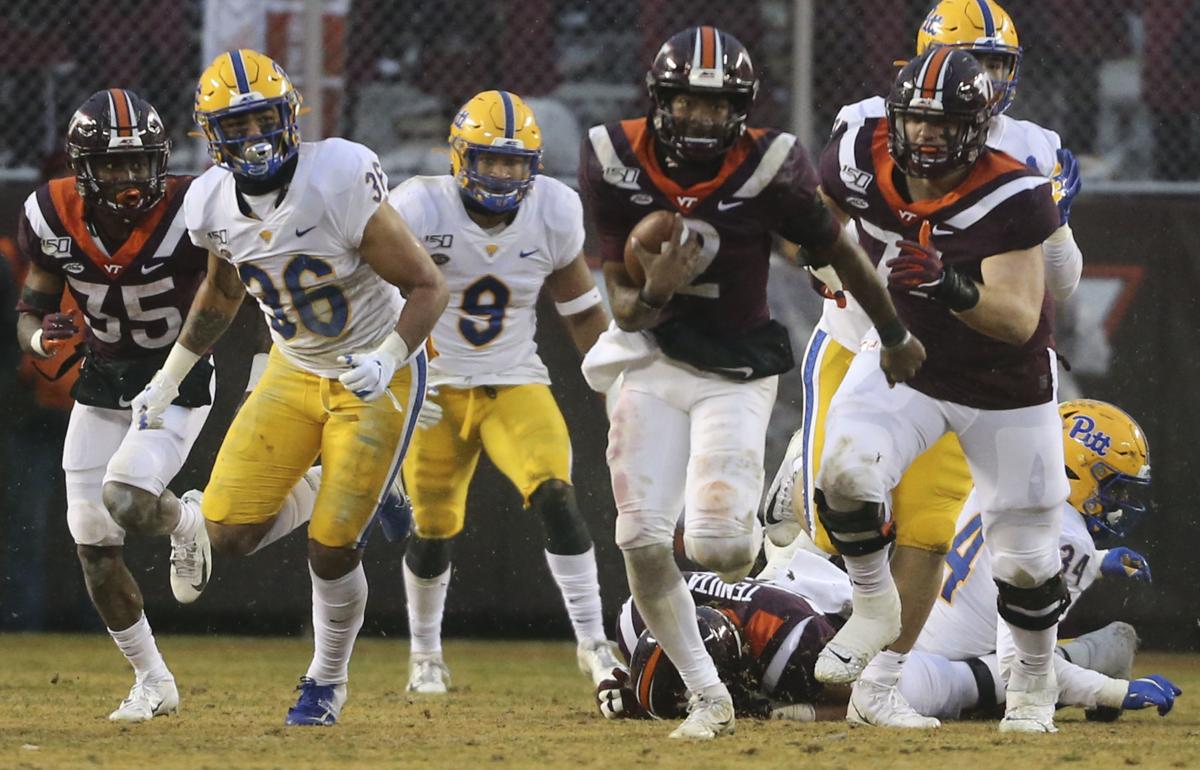 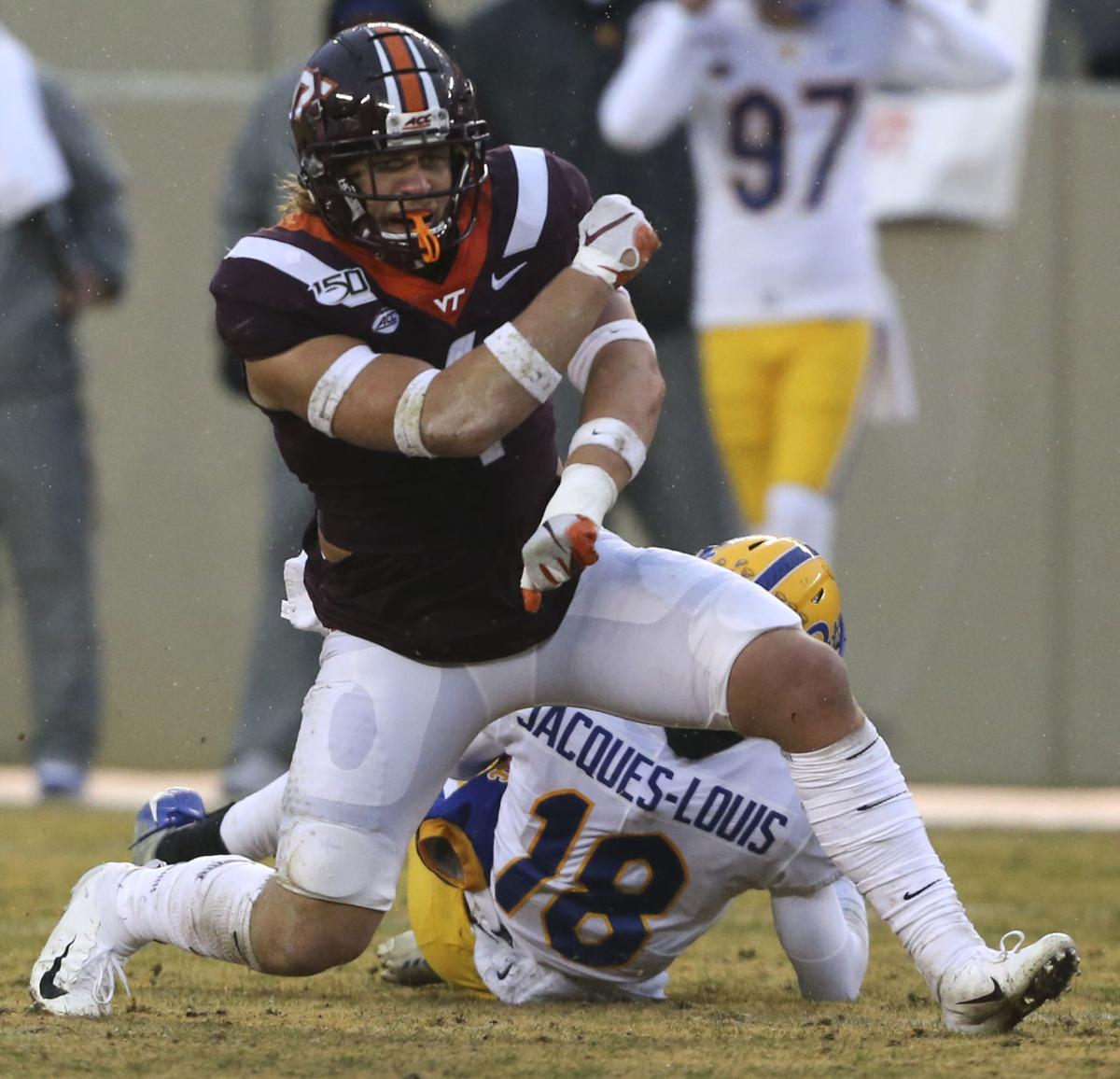 Virginia Tech quarterback Hendon Hooker (2) runs for a first down against Pittsburgh on Saturday.

Virginia Tech quarterback Hendon Hooker (2) runs for a first down against Pittsburgh on Saturday.

BLACKSBURG – The Commonwealth Cup will be a championship game.

No. 25 Virginia Tech dispatched Pittsburgh 28-0 on Saturday, meaning the winner of the Black Friday game between the Hokies and rival Virginia will determine the ACC Coastal Division champion.

“In our time here in the ACC, we’ve been in the hunt quite a bit, a lot more than we haven’t been,” Foster said. “And it’s fun to be back in that picture.”

Tech is seeking its second Coastal title in the last four years and seventh since the conference split into divisions in 2005.

Foster’s defense has been a big reason why the team, all but left for dead after a 45-10 home loss to Duke on Sept. 27, is a win away from the league’s championship game.

Sophomore quarterback Hendon Hooker, another major catalyst to the turnaround, improved to 6-0 as a starter, throwing touchdown passes to sophomore Tre Turner and junior Damon Hazelton.

“It’s really unique, everyone just coming together as a family,” Hooker said. “At the same time, everyone’s just expected to do your job.”

Freshman wide receiver Tayvion Robinson set up two of the Hokies’ offensive touchdowns, catching a 71-yard pass in the first quarter and running for 34 yards on a reverse in the second.

Pittsburgh (7-4, 4-3) managed just 174 total yards and was eliminated from the division title race. That’s a dramatic change from a year ago, when the Panthers piled up 654 yards, including 492 on the ground, in a 52-22 dismantling of a Tech defense with largely the same personnel as this year’s squad.

“It’s always fun winning,” said junior linebacker Rayshard Ashby, the former L.C. Bird High School star who had a seven tackles and a key forced fumble. “Two shutouts, some low-scoring games. How we’ve playing for each other has been amazing and so much fun to be a part of.”

Now, for the first time since 2011, the annual rivalry contest between the commonwealth’s two Power Five programs will determine the Coastal Division champion—the team that gets to play No. 3 Clemson in the ACC title game on Dec. 7 in Charlotte, N.C.

Saturday, Tech and Pittsburgh combined for five punts and a fumble on their first six possessions, totaling 26 yards and one first down on those possessions. But in the final four minutes of the first quarter, Tech opened up things.

First, Hooker found Robinson for a 71-yard catch-and-run that got the ball down to the 1-yard line. From there, sophomore tight end James Mitchell finished the work, running in for the touchdown, his fourth rushing touchdown on five carries this season.

Nine seconds later, on Pittsburgh’s next possession, Ashby hit Pickett, causing the ball to pop out of Pickett’s hands. Freshman defensive tackle Norell Pollard picked up the ball at the 7-yard line and ran it in for the Hokies’ third defensive touchdown in the last four games.

Robinson set up the offense’s next touchdown, running a reverse for 32 yards to the Pittsburgh 3-yard line. That led to Hooker’s 3-yard touchdown pass to Turner, which put Tech up 21-0 with 45 seconds left in the half.

The Hokies put the game away in the fourth quarter, when Hooker hit Hazelton for a 2-yard touchdown pass that made it 28-0 with 10:12 to go, setting up next week’s title clash with Virginia (8-3, 5-2).

“They’ve been through special circumstances and stuck together,” Tech coach Justin Fuente said. “So my feelings toward them haven’t changed because they’re winning games now. I’m more happy for them because they are getting some affirmation for their hard work.”

Tech-UVA games have had high-stakes before.

But in 2011, the winner of the game, played in Charlottesville, also claimed the division.

Tech won that meeting, just one of its 15 in a row over rival UVA.