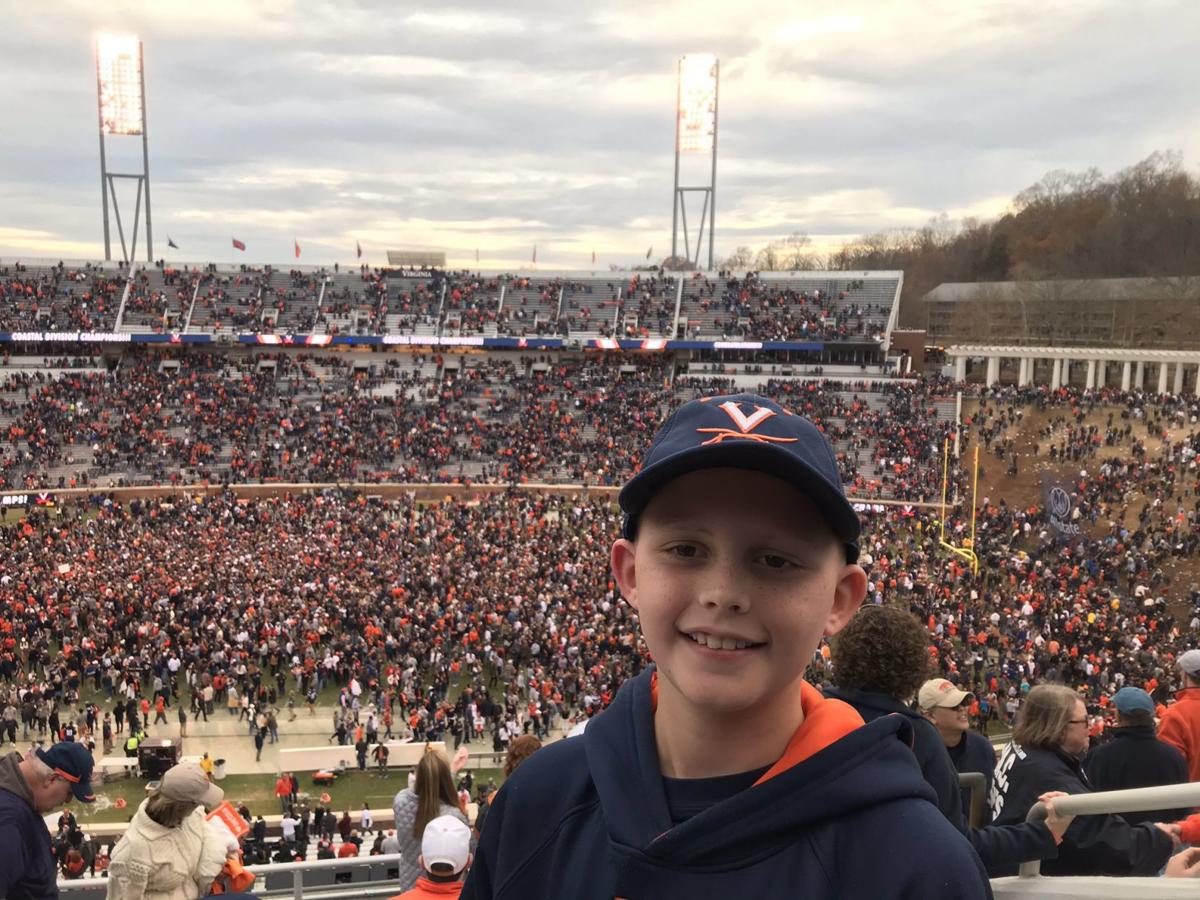 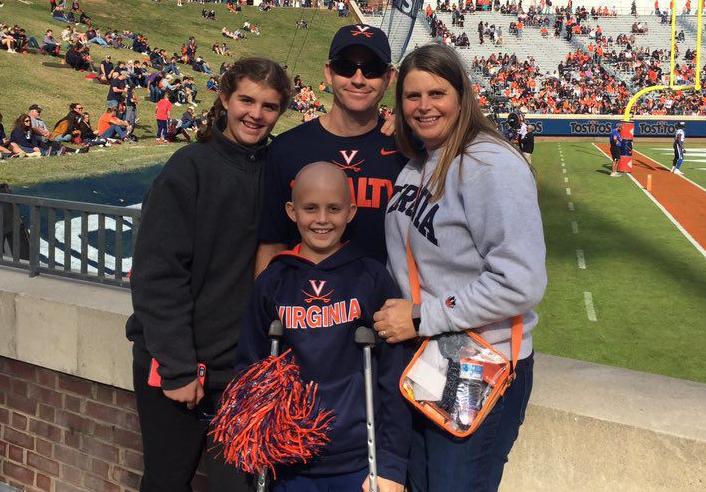 Virginia fan Dalton Fox (front) and his family at Scott Stadium in Charlottesville. 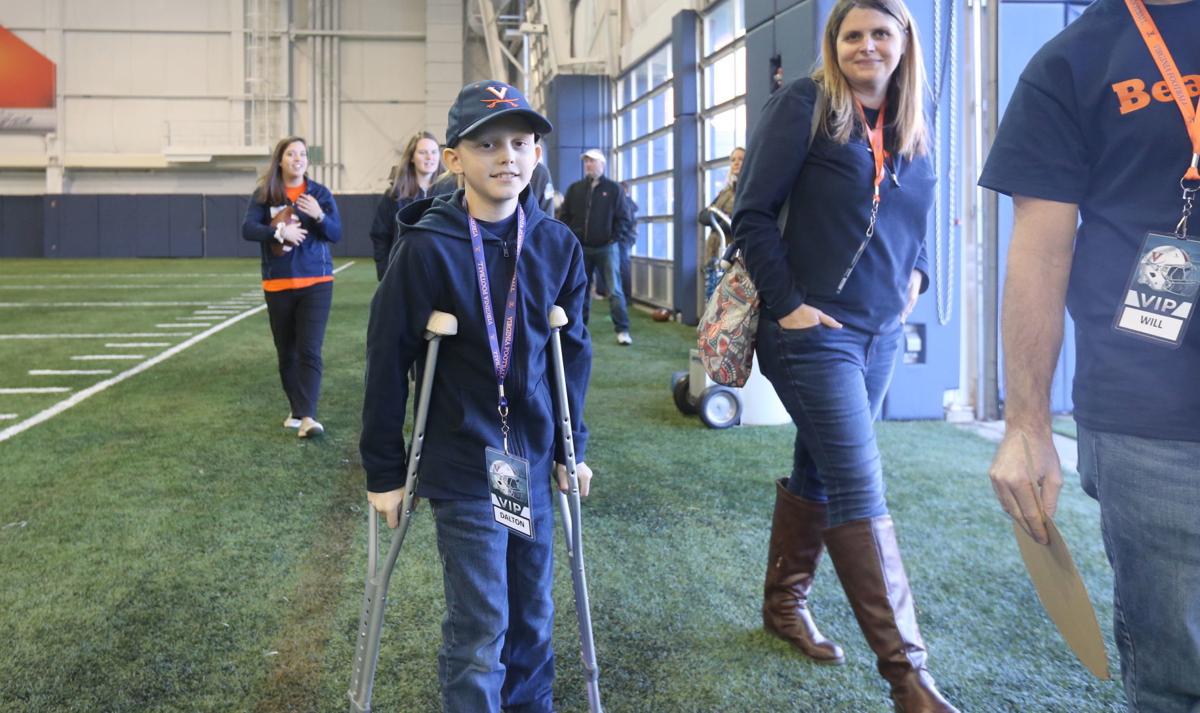 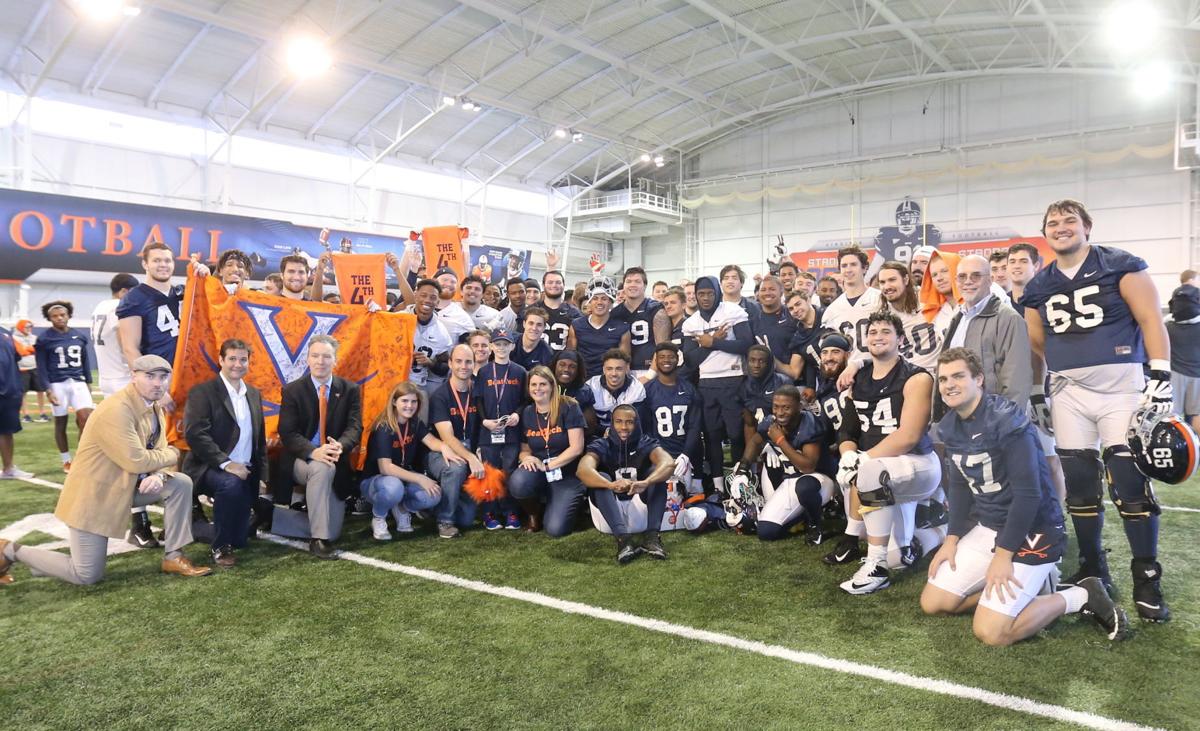 Virginia fan Dalton Fox (front) and his family at Scott Stadium in Charlottesville.

A nurse came up to Dalton Fox and told the 10-year-old Virginia Beach native that it was time for him to settle into his hospital bed. He needed to be wheeled to his leg amputation surgery.

And that’s exactly what he did.

The young UVa fan walked to his surgery before losing the lower half of his left leg.

A participant in the Virginia football team’s Thursday’s Heroes program last season, Dalton has been battling Ewing’s Sarcoma, a rare form of cancer that shows up most commonly in bones or soft tissue, since March of 2018.

Bronco Mendenhall implemented Thursday’s Heroes upon arriving at Virginia. The program brings in children going through challenges like Dalton, and allows them to spend a day with the football team. They receive gifts, watch practice and interact with players.

Mendenhall’s programs have done this since his second season at BYU.

“We realized that we were given and had this amazing opportunity,” Mendenhall said. “We had young boys and so much attention was being focused on us, and we weren’t comfortable with that. We wanted to teach our sons how and why and that it’s meaningful to give back.”

Mendenhall and his wife Holly were looking for a way to give a meaningful experience to kids in the local community, and they ultimately created Thursday’s Heroes. It’s been a staple of Mendenhall’s teams ever since.

Dalton attended his Thursday’s Heroes outing while he was still undergoing chemotherapy.

In February of 2019, Dalton wrapped up chemotherapy and it was determined that there was no longer any evidence of disease. The Fox family celebrated.

On Aug. 28, doctors performed an above-the-knee amputation to help with his treatment.

“Five days later, he went to school,” Will Fox, Dalton’s dad, said. “His goal was, despite his amputation, to not miss the first day of school, so the day after Labor Day he burst into school.”

Many of Dalton’s recent accomplishments are jaw-dropping. He routinely beats his peers at swim meets while undergoing treatment and he made his way to school just days after his amputation. Dalton is extraordinary, but sometimes the Fox family wishes life felt a bit more normal.

When your child has cancer, it can be difficult for life to feel normal. Between doctor’s appointments, different test results and medical costs, stress can easily build up.

That’s where UVa sports play a key role in the lives of the Fox family.

Dalton’s diagnosis in March of 2018 came 11 days before the Virginia men’s basketball team lost to UMBC. Will, who attended UVa and graduated in 1997, had friends text him about the disappointment surrounding the loss. Even as a die-hard Virginia fan, Will wasn’t all that concerned considering the other things happening in his life.

He decided to pen a letter to Tony Bennett and the UVa men’s basketball program. He talked about his situation and shared some perspective, discussing how there are worse things in life than falling to UMBC in a basketball game.

Much to Will’s surprise, he received a response.

Meg Swab, an administrative assistant for the men’s basketball program, called Will and invited Dalton and Dalton’s older sister Rachel to be ball kids at a UVa game. The Foxes accepted and attended the team’s 60-54 win over Notre Dame on Feb. 16, 2019. Despite competing in an ACC game, the players made an effort to make Dalton’s experience special.

“Jack Salt came and gave me a high-five, and I was facing the other direction, and I didn’t know what was happening,” Dalton said. “Rachel tapped me and I was like ‘Oh!’”

On the same phone call that the family received the invitation to attend a basketball game, Swab invited Dalton and the Fox family to Thursday’s Heroes.

The Fox family originally said they were interested in attending Thursday’s Heroes, but they’d rather someone else receive an invite since they were going to receive the experience with the basketball team a few months later. Swab assured them not to worry about that, and arranged for Dalton to be the team’s Thursday Hero the week of the 2018 Virginia Tech game.

Dalton went on the Wednesday of Virginia Tech week with the game on a Friday and Thanksgiving on Thursday. His day included watching practice, hanging out with Hasise Dubois and receiving a video message from Odell Beckham Jr., who was a member of Dalton’s favorite team, the New York Giants, at the time. He also received a clear Giants helmet that lights up, and Dalton uses that as his night light to this day.

“It was a really cool day,” Jen Fox, Dalton’s mom, said. “They didn’t mention cancer at all that entire day. Everybody was just happy and so excited to see Dalton and the entire family … they were almost more excited than we were at certain points.”

By focusing on Dalton rather than his illness, the football team provided the Fox family with not only a memorable day, but a chance to feel normal. The players and coaches were the reason why the day felt so special.

“Those guys truly love the kids that they bring in on Thursday’s Heroes,” Jen said, choking up. “Coach Mendenhall, I remember and I still see it in my head, he pulled Dalton aside that day and he knelt down next to him and he just talked to him.”

Mendenhall tries to provide “sincere support” in those moments. He spent about five minutes chatting one-on-one with Dalton that day. When Dalton’s cancer returned earlier this year, he sent a video message to the family offering support.

The fourth-year head coach works hard to build a winning product on the field. He also cares about using his position to positively impact those in the community.

“It’s so fun,” Mendenhall said of Thursday’s Heroes events. “The smiles that you see on those days, the tears in parents’ eyes, the players’ engagement and just the feeling in general of giving is good for the soul. Our team and our staff we’ve been given so much, to share is one of the essential qualities for a happy life for anybody.”

By sharing a day with Dalton, Mendenhall’s team helped the Fox family feel normal. That can be challenging with all that Dalton has faced in his 10 years, but UVa sports provide an outlet to feel normal.

About two weeks after his amputation and first day of school, Dalton and his family came to Scott Stadium watch Virginia face Florida State. The Cavaliers won 31-24 and fans stormed the field.

Later in the season, thanks to Seats of Hope, a charity that provides tickets and special experiences to children battling life-threatening ailments, Dalton and his family received tickets to the Virginia-Duke game. UVa won 48-14.

To end the season, Dalton attended the Virginia-Virginia Tech game. The Cavaliers broke a 15-year-losing streak to the Hokies and clinched the ACC Coastal Division championship as fans rushed the field after a 39-30 UVa triumph. In the bleachers at Scott Stadium was Dalton Fox, smiling as his dad went crazy.

Once again, the focus wasn’t on Dalton’s battle with cancer. The Foxes were just living their lives.

When Dalton isn’t taking in a Virginia sporting event, he’s often found hanging out with friends or beating his peers in swim meets. The 10-year-old hasn’t let cancer stop him from living life to the fullest.

While the language has changed, nothing alters Will’s pride in his son’s determination and positive attitude.

“I’ve never been prouder of anybody or anything in my life than I am with Dalton,” Will said.

Dalton, however, is a bit reserved and doesn’t enjoy receiving frequent compliments. To accommodate for Will’s pride and Dalton’s disdain for praise, the two created a code for Will to use when he’s feeling proud of Dalton.

“What do I tell you when I’m proud of you?” Will asked.

It’s a code that could only be created by a dad and his 10-year-old son.

The two laughed together as they shared another moment that felt normal. Dalton’s circumstances and his fight against cancer are rare, but that won’t stop the extraordinary Virginia fan from living a normal life.

“He doesn’t want to be defined by cancer,” Jen said. “So he doesn’t let it define him.”