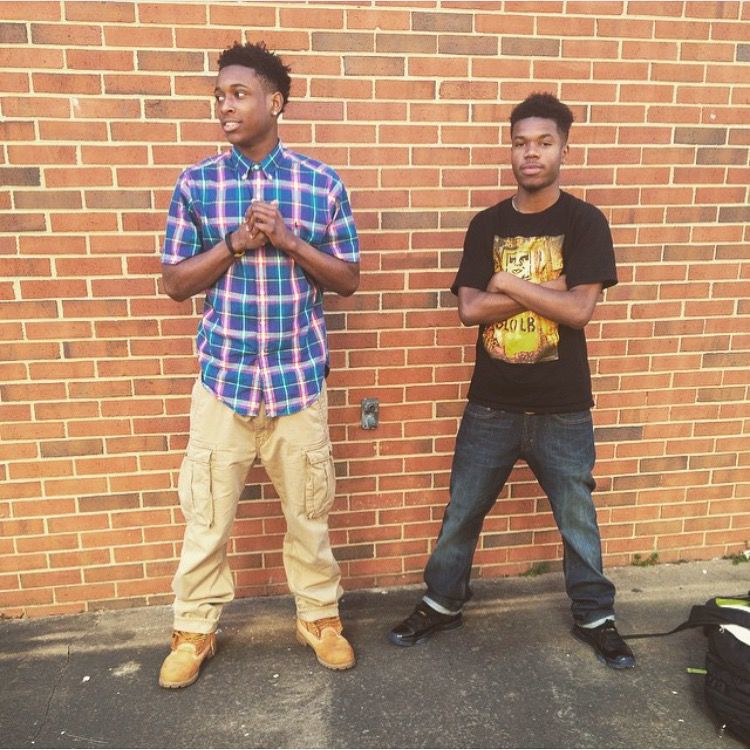 K’Von Wallace (left) and Khalil Watson, seen when they were juniors at Highland Springs High School in Henrico County, met in elementary school and remain close. 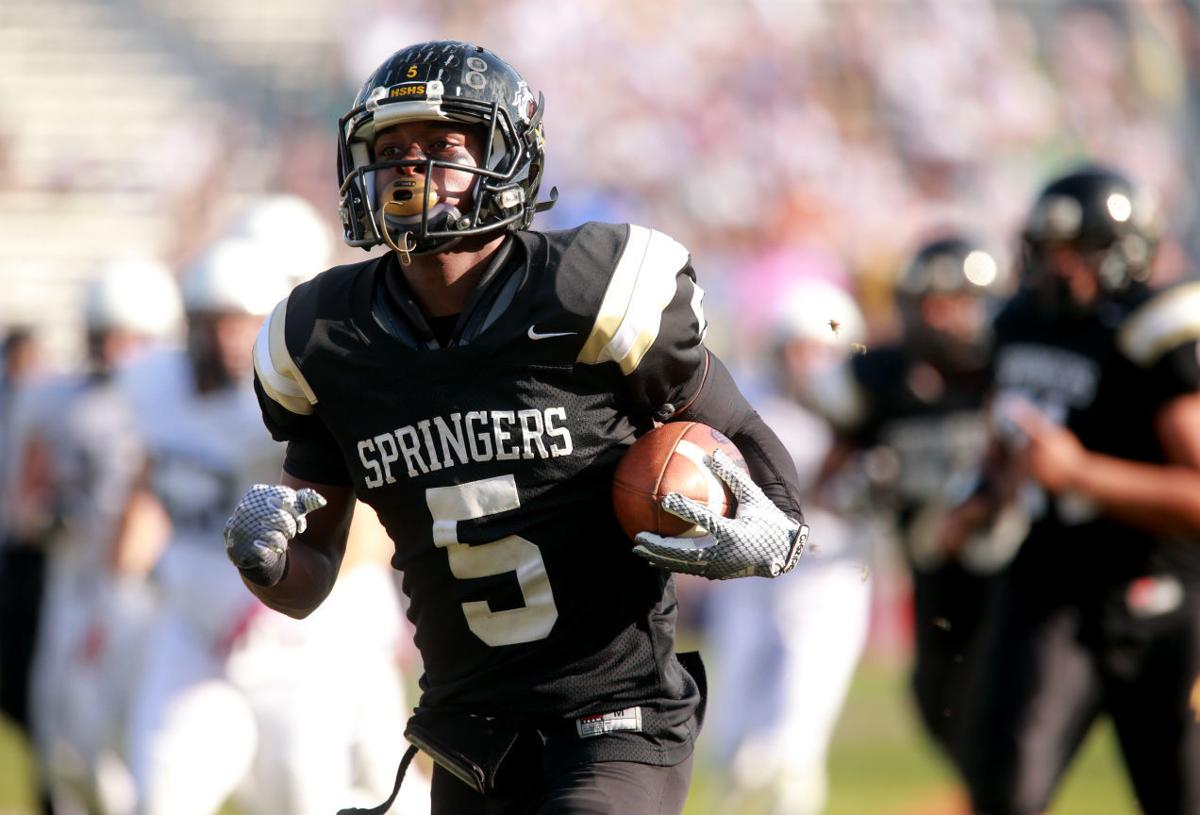 Highland Springs WR K'Von Wallace(5) runs as the team plays against Stone Bridge during the fourth quarter of 5A state championship game at Scott Stadium, University of Virginia on Saturday.

K’Von Wallace (left) and Khalil Watson, seen when they were juniors at Highland Springs High School in Henrico County, met in elementary school and remain close.

Highland Springs WR K'Von Wallace(5) runs as the team plays against Stone Bridge during the fourth quarter of 5A state championship game at Scott Stadium, University of Virginia on Saturday.

K’Von Wallace knows things could have turned out far differently for him.

Plenty of the young men he grew up with in the seemingly hopeless landscape of the Creighton Court public housing community in Richmond’s East End wound up in jail, seriously injured or dead.

Wallace? He’s hunting his third national championship as a safety on the Clemson football team. On Saturday, Wallace and the third-ranked Tigers will play Virginia in the ACC championship game in Charlotte, N.C. He’ll graduate later this month, becoming the first person in his family to earn a college degree.

“There was like a 0.9 percent chance,” Wallace said this week. “And I beat the odds.”

Khalil Watson will be in Charlotte on Saturday, too. Watson and Wallace grew up together, becoming friends in their early elementary school days, and carrying that through to their time at Highland Springs High School. They still speak weekly by phone.

Watson will be at Bank of America Stadium to cheer for his good friend. He’ll do so from his wheelchair. Unlike Wallace, Watson didn’t escape their youth unscathed.

“We all grew up with the same dream, to be successful in whatever we do,” Watson said. “We all played football, basketball, ran track. All our dreams were to make it to the college level and go pro after that. But, ya know, other things happen.”

For Watson, something else happened. On May 26, 2016, he was the victim of a robbery, during which he was shot as he left a Richmond barbershop. A bullet went through his hand, then into his neck before exiting through his back. On its path, it ripped through his spinal cord.

Watson, 22, is paraplegic, confined to his wheelchair, living with a mix of regret and determination.

His story is as tragic as it is tragically common from the young men who come from the neighborhoods Watson and Wallace do.

“It’s rough. I don’t want to sell you the story that every black child has a rough upbringing but, that’s reality sometimes,” Wallace said. “I lost a couple of friends to gun violence. I lost a couple friends to the system and them being stuck in jail for life, or jail for years. It’s sad to say but, that’s kind of the norm when you grow up in those kind of areas, the Mosbys and Creighton Courts.”

So with a father who spent time in jail and a mother who worked multiple jobs to support her family, growing up in a rough neighborhood where the clearest path to financial independence entailed strolling on the wrong side of the law, how did Wallace navigate to where he is now?

He credits his faith, his mother and a group of older kids in the neighborhood—his “big brothers,” he calls them, despite an absence of any blood relation.

Roxanne Barnes made sure Wallace knew, in no uncertain terms, she didn’t want him trying to help her by turning to a life of crime. If Wallace wanted to lift his family out of poverty, he could do it the right way—get an education, a career, build a respectable life.

“I never wanted to disappoint my mom,” Wallace said. “I felt like that was the worst feeling in the world, to disappoint someone who did everything she could for you, for the family, to better your life. So how dare you go get in trouble. How dare you get kicked out of school. How dare you take a gun to school or take a gun and rob somebody. I feel that would have been a total disrespect to my mom.

“And a total disrespect to my big brothers.”

Those big brothers, again, no relation other than that they were all born into a less desirable section of Richmond, were not the kind of men you wanted to disrespect.

Many of them, Wallace said, were living exactly the kind of life he and his mother were fighting so hard for him to avoid. But, for whatever reason, they shielded Wallace from the worst of that street life.

“And all the friends that I had, regardless if they were criminals or not, they always looked out for me,” Wallace said. “No matter what they were doing, they kept me out of it.”

That cleared the way for Wallace to excel in sports, specifically football for the Springers after moving to Highland Springs. He earned a scholarship offer to Cincinnati and thought that was where he was headed. Then came one from Pittsburgh. Clemson. Ohio State. Arizona. Michigan State.

Four years later, Wallace is a three-year starter for the Tigers and a third-team All-ACC selection.

He’s tallied 133 tackles and made five interceptions playing in his 56 career games. Clemson is 53-3 in that span, has won two national titles and is currently on a 27-game winning streak.

“He’s been a joy to coach,” said Clemson’s Dabo Swinney this week. “Seeing him from where he was when he got here to who he is now, not just as a football player, but as a man, just how well equipped he is for life. He’s a graduate here in a couple of weeks. I’m just super proud of him. He’s so prepared for his next opportunity in football, but more importantly to just go and dominate in life. I’m just thankful to have had an opportunity to have a front row seat to that growth over the last four years.”

Watson feels the same way. He recalled talking to Wallace after the shooting and said his friend’s success pushes Watson to overcome the adversity he faces every day. Watson is now enrolled at a junior college in Richmond and hopes to eventually transfer to a four-year college.

“We don’t let anything stop us,” Watson said. “K’Von, he’s always been the underdog. People always doubted him. He motivates me and I motivate him. Me seeing him get this far, it’s like, I have to keep going.”