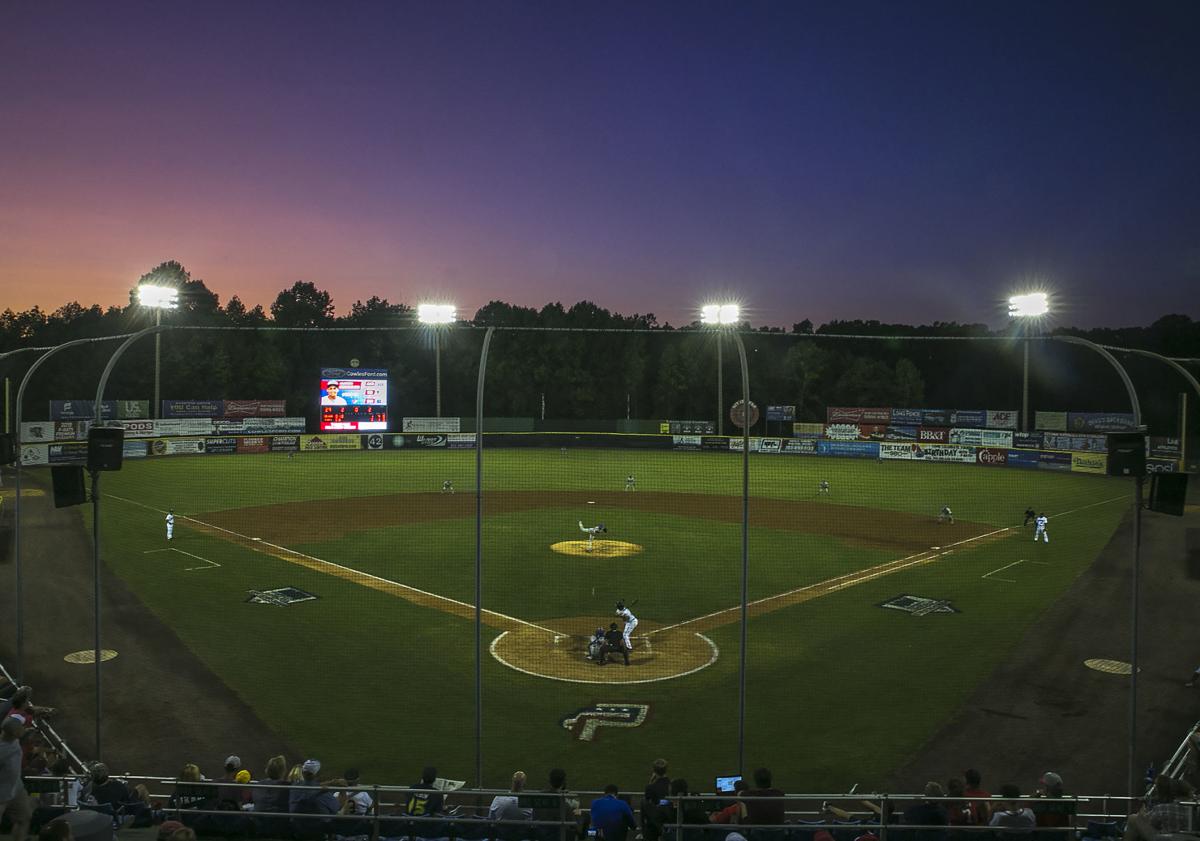 The sun sets as the Potomac Nationals take on the Myrtle Beach Pelicans in the fina game at Pfitzner Stadium in Woodbridge Thursday. 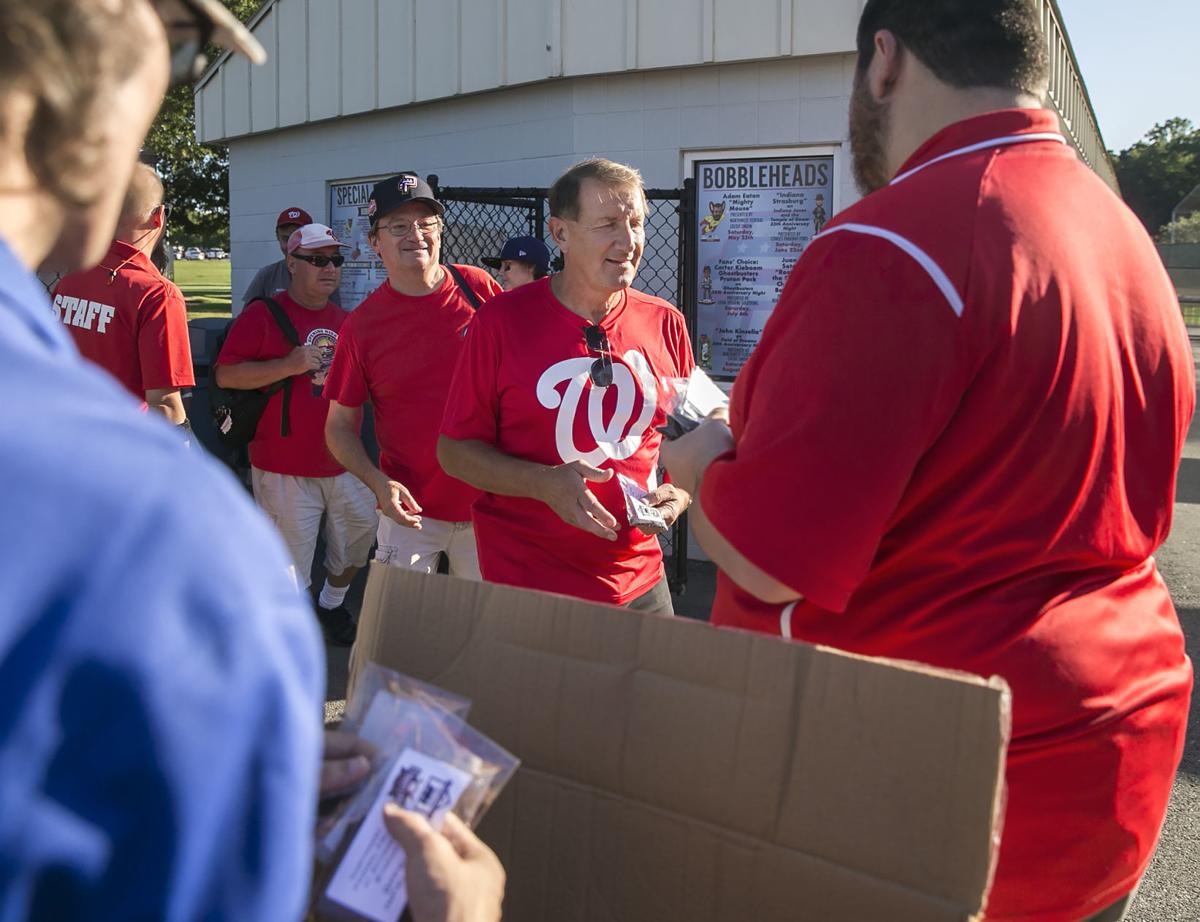 Joe Guzowski (center) receives his bag of infield dirt after getting the first spot in line at Pfitzner Stadium at 3 p.m. on Thursday, Aug. 29. 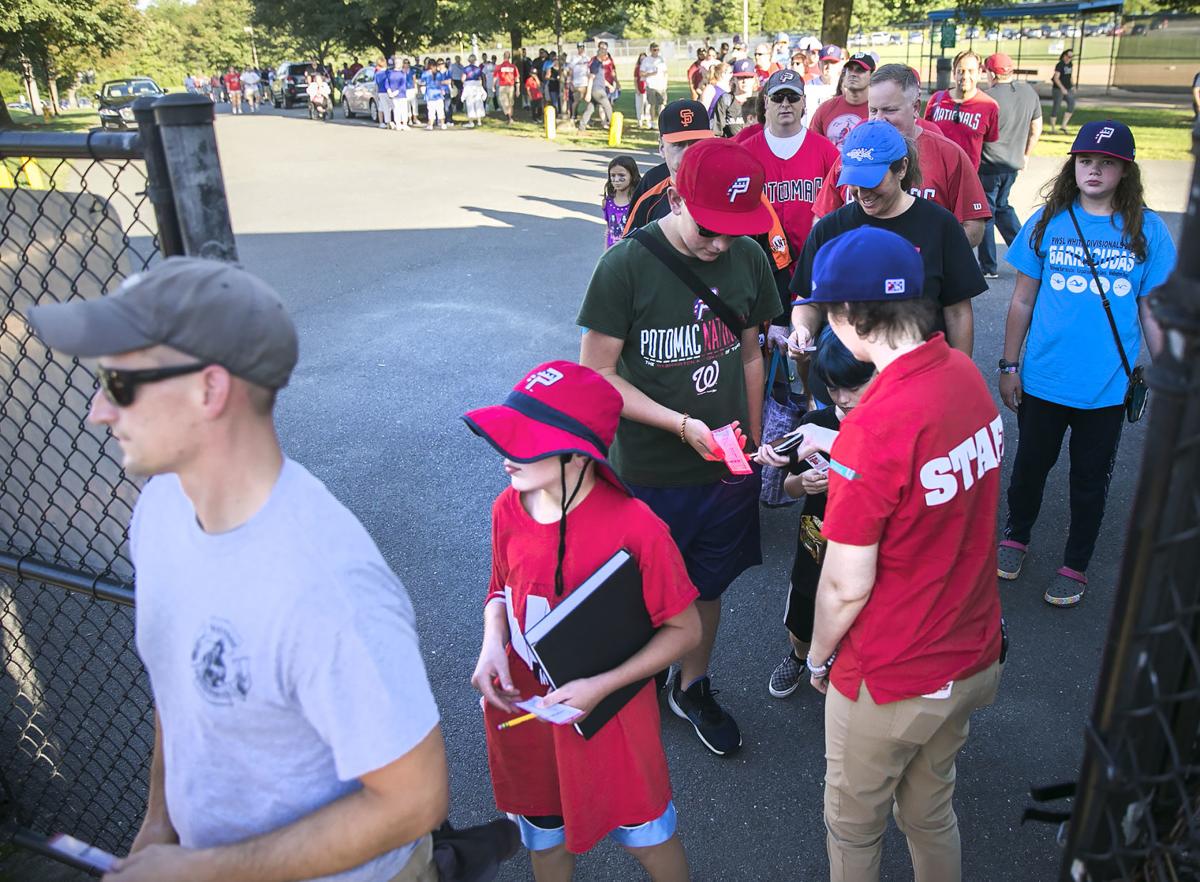 The sun sets as the Potomac Nationals take on the Myrtle Beach Pelicans in the fina game at Pfitzner Stadium in Woodbridge Thursday.

Joe Guzowski (center) receives his bag of infield dirt after getting the first spot in line at Pfitzner Stadium at 3 p.m. on Thursday, Aug. 29.

WOODBRIDGE—At a folding table just inside the gate, 40 miles from where the Washington Nationals’ advanced Class-A affiliate has broken ground on a new stadium, they were giving away dirt.

Bags of crumbly clay bearing the label “official infield” awaited the first 500 fans Thursday night, keepsakes commemorating what was likely the Potomac Nationals’ final game at Pfitzner Stadium before the team’s scheduled move to Fredericksburg in 2020.

Few have witnessed as many Washington-area baseball moments as Don Plavnick, 74, who arrived wearing a game-worn Alexandria Dukes jersey. Plavnick’s firsthand hardball history includes the original Senators’ (now the Twins) final game in 1960, the first game of the expansion Senators the following season, the final game at Griffith Stadium and the swan song at D.C. Stadium a decade later.

When baseball left Washington for 33 years, Plavnick then migrated to following the Dukes and—memorably—Mickey Mantle Jr.’s brief, ill-fated tenure with the team. Nepotism, it seems, could only get the young namesake so far.

“He left of his own volition,” Plavnick recalled.

The Dukes moved to Prince William County in 1984, rebranding first as the Yankees and later, the Cannons. Plavnick attended the first game at Pftizner and shortly thereafter secured what he’s “99 percent sure” is the first baseball Barry Bonds ever signed as a professional.

“I’ve been through it all, waiting for them to improve the stadium, worried they’re going to move,” Plavnick said. “Hope to make the first game in Fredericksburg, with a little luck.”

Joe Guzowksi is comparatively uninitiated, having attended his first P-Nats game the previous Saturday. That didn’t stop him from arriving around 3 p.m. Thursday to secure a spot in line—and lay claim to a bag of dirt—for his good friend Mark Head. The Northern Virginia residents considered Thursday their last chance to catch a minor-league game without striking out on an extended southbound commute.

“The challenge is the traffic,” Guzowski said. “It’s going to be much harder.”

While the move to Fredericksburg and Celebrate Virginia South is settled, the Nationals recently renewed their lease for Pfitzner Stadium through 2020 as a contingency if the new stadium isn’t ready for opening day next April.

“That’s the only chance we’ll be back there, and it certainly won’t mimic the experience from a product standpoint,” Potomac general manager Bryan Holland said on Monday. “We’d basically just be there to get the games in.”

Instead, a Salem Red Sox victory eliminated the P-Nats from contention. The regular season ended Monday, and the franchise will soon turn its attention to replacing the temporary “Fredericksburg Baseball” moniker with a permanent name.

“Our fans are champing at the bit for the good stuff,” Holland said. “We can’t wait to unveil that.”

If Thursday’s contest against the Myrtle Beach Pelicans was, in fact, curtains for minor league baseball in Woodbridge, Aldrem Corredor sent the P-Nats’ faithful out in style. The Venezuelan first baseman’s towering three-run homer in the fifth inning propelled Potomac to a 5-1 victory.

At the final out, most fans stood to show their appreciation. A few tried, unsuccessfully, to abscond with signage. The team store liquidated its inventory.

Holland was among the last to leave the ballpark.

“It’s a family-owned business, so you’re literally locking the door behind you, you’re turning off the stadium lights,” he said. “I don’t think it really washed over me until the end of the night.

“The weather was great. The team played a great game. It was just a classy way to put a bow on 35 years.”