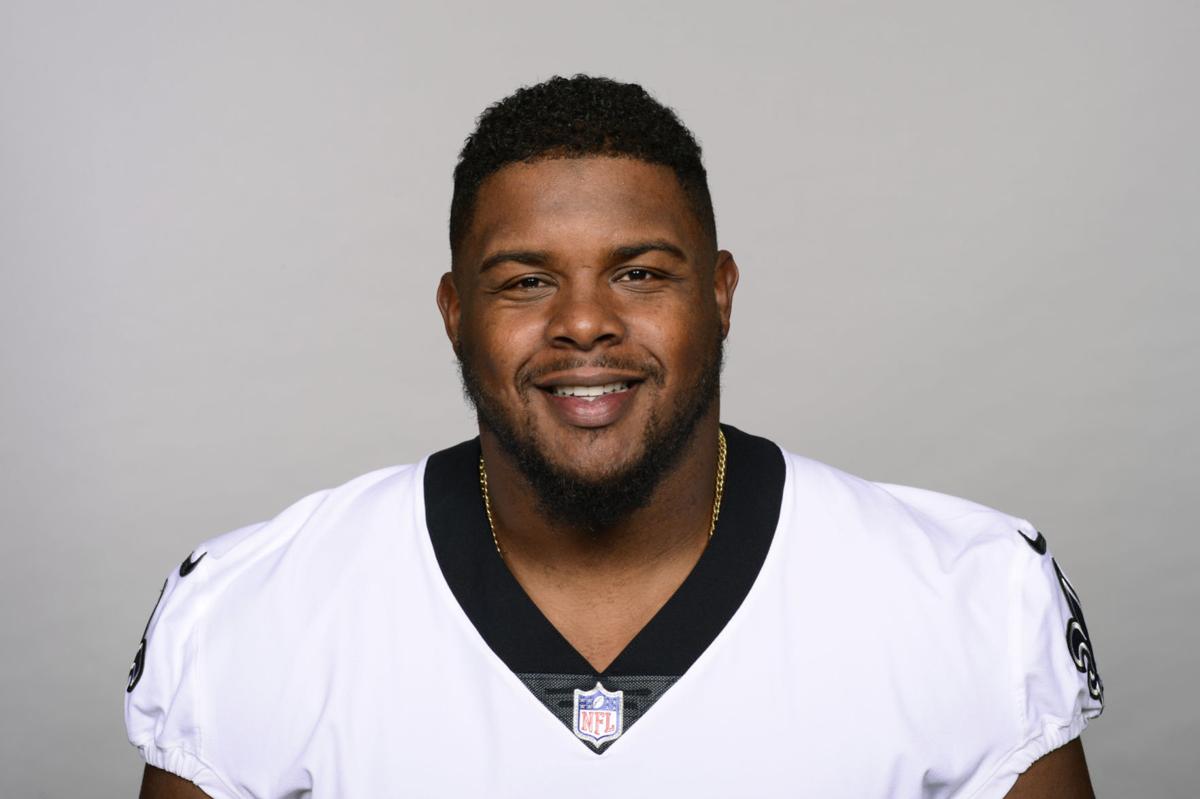 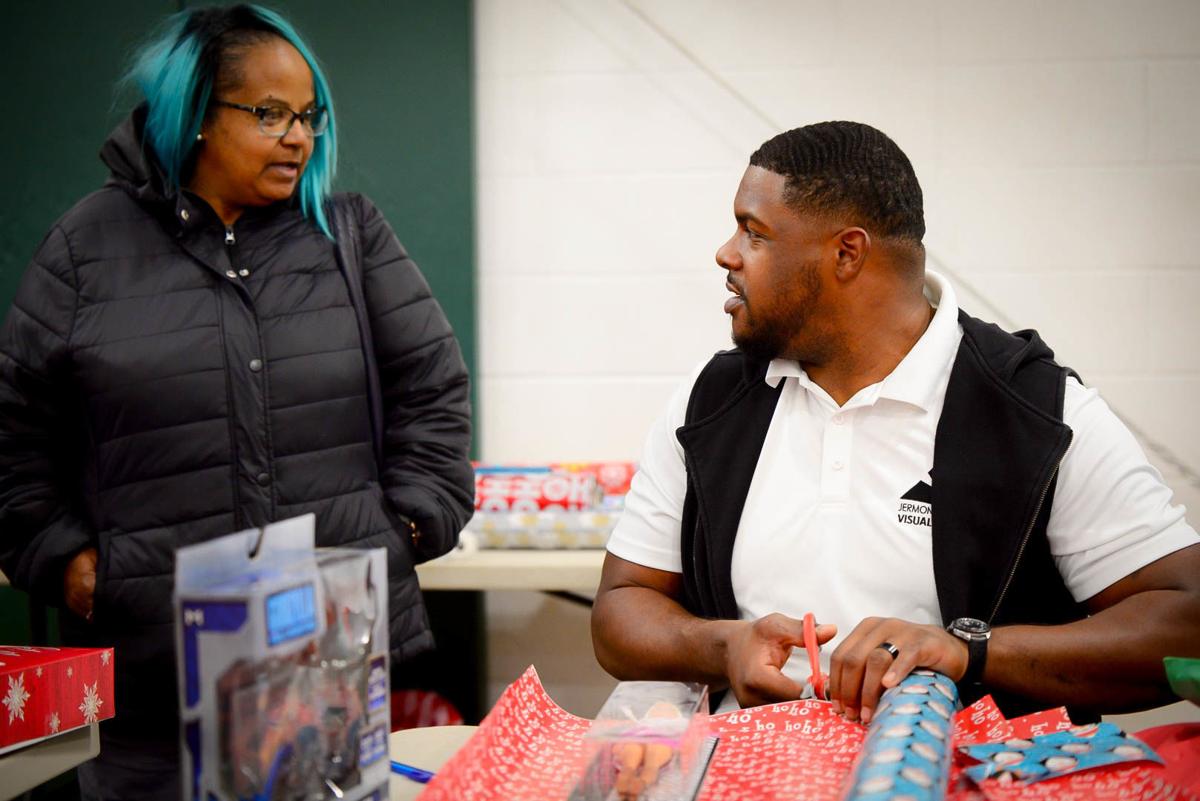 Former NFL offensive tackle Jermon Bushrod (right) talks with Quintella Johnson as he  helps wrap Christmas gifts for 30 King George children, including six of her grandchildren, last December. The now-retired Bushrood partnered with the Dahlgren Walmart and the YMCA for the holiday program.

Former NFL offensive tackle Jermon Bushrod (right) talks with Quintella Johnson as he  helps wrap Christmas gifts for 30 King George children, including six of her grandchildren, last December. The now-retired Bushrood partnered with the Dahlgren Walmart and the YMCA for the holiday program.

Jermon and Jessica Bushrod met in 2008, the second NFL season for the King George County native.

The couple is entering their eighth year of marriage, but Jessica Bushrod is still learning plenty about her husband.

After Bushrod, 35, retired from football last summer and the family moved back to South Florida from New Orleans, Jessica Bushrod was on bed rest for 2½ months while pregnant with their fourth child.

Jessica Bushrod said it was quite an experience watching the two-time Pro Bowl offensive lineman step up around the home.

“I thank God he was home more,” Jessica Bushrod said. “He took me to every single doctor’s appointment. He really held down the home. He took the kids to dance, to practice, to school. God’s timing lined up perfectly. If he was still playing I’m not sure how he would’ve handled it.”

Bushrod played 12 years in the NFL and earned a Super Bowl ring with the New Orleans Saints after the 2009 season. He’s witnessed many of his former teammates struggle to come to grips with stepping away from the game, so he’s determined to make the transition seamlessly.

In the five months since he called it a career, Bushrod has become more hands-on with his family and his Visualize and Rize foundation. He and former college teammate Ryan Meehan also launched the Bush & Mee podcast, where they discuss everything from sports to traveling and food reviews.

“If you don’t have anything to fall back on or you think you’re just a football player and nothing more, it can be very tough on you,” Bushrod said of retirement. “Fortunately I was able to walk away. I had the opportunity to continue playing, but I just felt in my heart that it wasn’t time for me to keep going. I had to look at the bigger picture.”

That bigger picture became clearer for Bushrod in October 2018 after the family’s third child, Jordyn, died one week after she was born with Wolf–Hirschhorn Syndrome, a condition that can cause delayed development and growth.

Bushrod immersed himself in research on Wolf–Hirschhorn. He formed partnerships with other families affected by it, and also continued to provide scholarships for Fredericksburg-area youth through his foundation, which holds an annual football camp and golf tournament in King George.

Last month, Bushrod partnered with the King George YMCA and Walmart to provide gifts for 30 elementary-aged children in the county.

Bushrod said if no team pursued him before his retirement, the transition may have been tougher, so he feels “blessed” to walk away on his own terms. He said the next step is to get a complete physical and mental health evaluation because many players leave the game with body and brain issues that cause problems later in life.

“We’re going to start that very soon,” he said. “That’s something I hope every retired player is going to do—figure out where our bodies are physically and making sure we’re making the right decisions mentally and emotionally.”

Bushrod said he’s thankful his wife needs him around the house. He said many players go into depression once they lose the “game-day feeling” that comes with teammates pursuing a common goal.

Jessica Bushrod said she appreciates the little things like grocery shopping as a complete family and husband and wife each preparing the kids for school.

The couple has 7-year-old Jermon Jr., 6-year-old Jayla and 10-week-old Janae. Bushrod notes that he has four children as he keeps the memory of Jordyn alive.

“I’m glad I have my family because [retirement] can be hard if you don’t have anything going on outside of football,” Bushrod said. “I miss going out there and playing the game, but the physical beating my body took makes me totally fine with where I am today. It was a blessing to be in the league for as long as I was.”

Now it’s on to the next phase. The Bush & Mee podcast has given Bushrod an outlet to discuss his passions.

Bushrod and Meehan admit the production is still a work in progress, but they’re having fun while still developing their skills. They have around 2,000 followers on social media since they started last fall. Bushrod has approximately 74,000 followers between Twitter and Instagram and he’s hopeful that eventually carries over to the podcast.

Meehan, a former Towson University tight end, said Bushrod’s strengths are his knowledge of the game and sense of humor. He said Bushrod has always been meticulous and was the teammate others went to when they didn’t understand something.

Bushrod also has connections that have led to well-known guests like former Saints teammate Reggie Bush and Stafford High graduate Torrey Smith, who retired after he was released by the Carolina Panthers in August.

Bushrod and Meehan have been close friends since they first met in 2002. Meehan said he’s witnessed a noticeable difference in his co-host since retirement.

“I would say he’s freer now, and I’m not talking in a time sense but more in a spiritual sense,” Meehan said. “When he was playing, there was always a weight on his shoulder.”

He and Jermon Jr. attended the Saints’ 26–20 loss to the Minnesota Vikings in the NFC wild-card playoff game on Jan. 5. The defeat did little to dampen the mood for father and son.

Jessica Bushrod said the one thing Jermon Jr. misses is being in the locker room with his dad and meeting famous players and coaches. But now he and his father can travel to contests together or watch them on the couch at home.

Bushrod has a fresh perspective on life, and fatherhood.

“I’ve gotten to see what my wife deals with on a day-to-day basis,” he said. “It’s been eye-opening and it has given me a different bond with my family.”