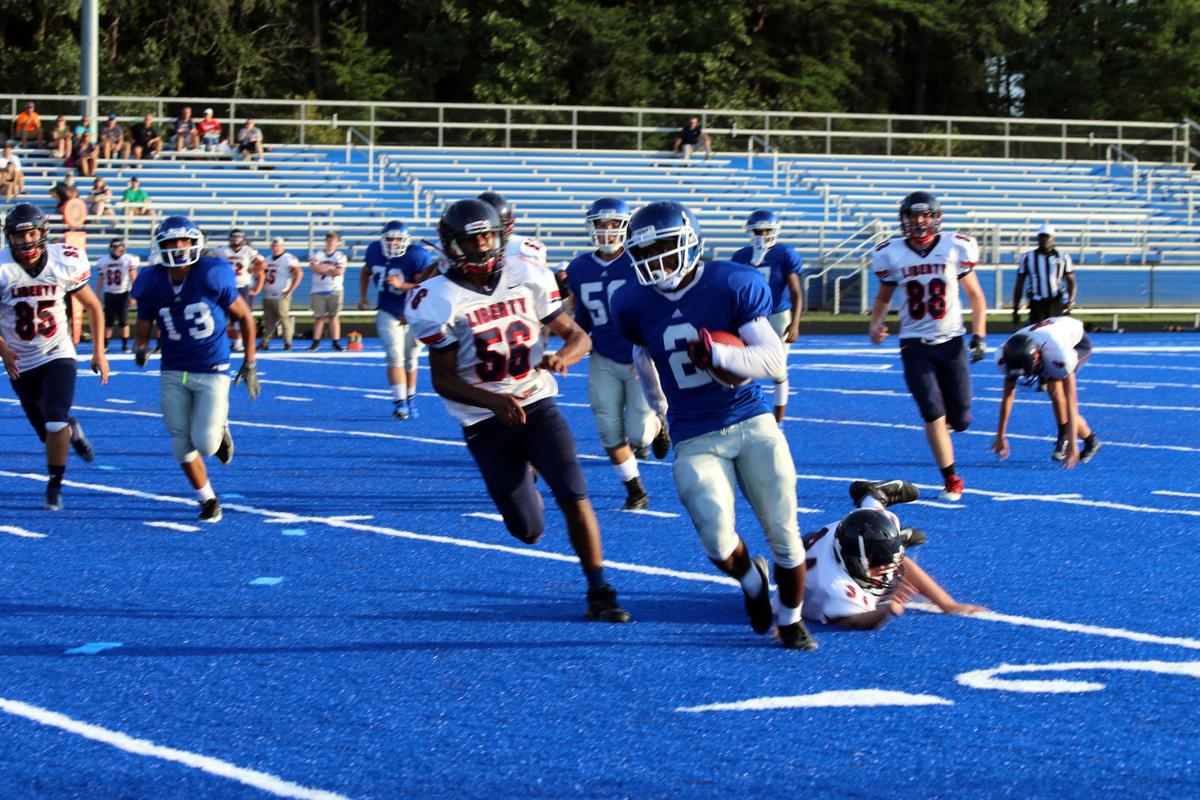 Courtland’s E.J. Rogers runs for a 26-yard touchdown during the first quarter of Wednesday night’s J.V. football game with Liberty. 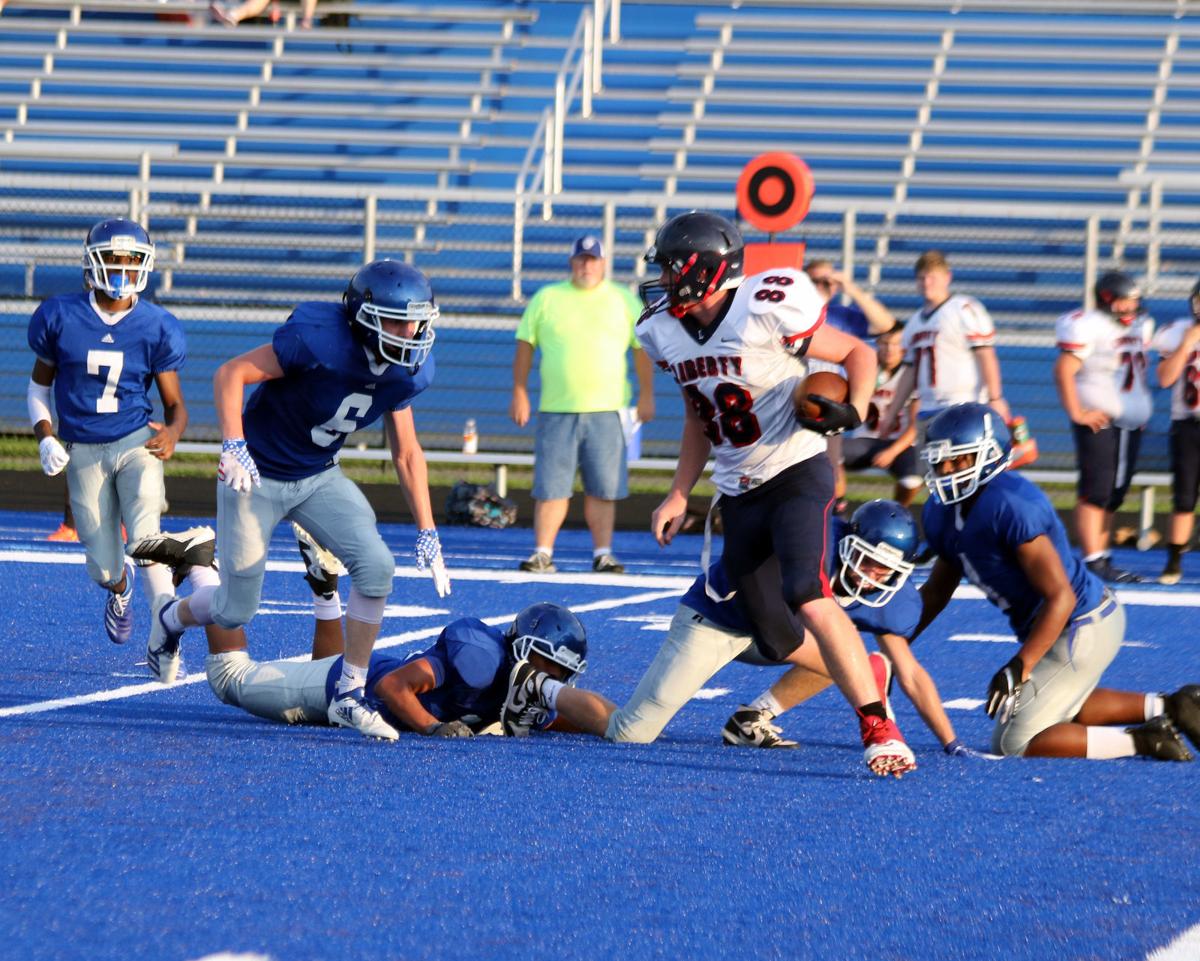 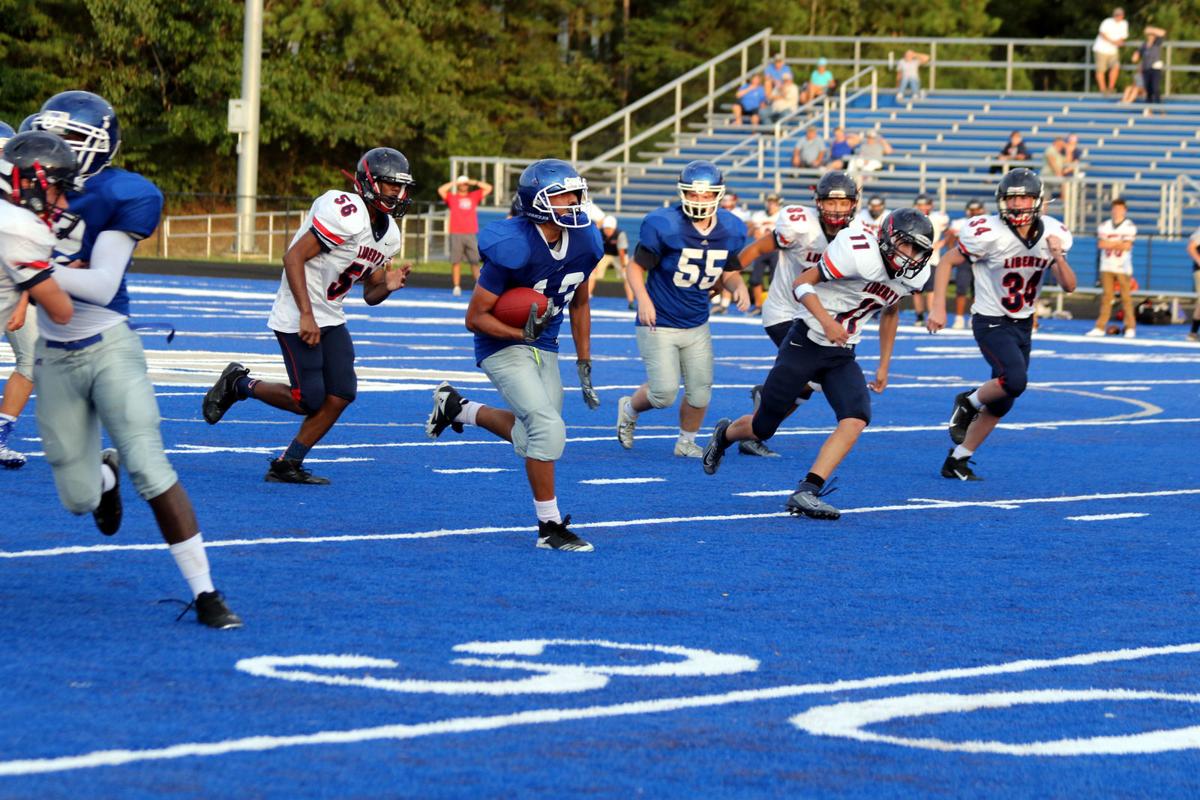 Courtland’s E.J. Rogers runs for a 26-yard touchdown during the first quarter of Wednesday night’s J.V. football game with Liberty.

FREDERICKSBURG – The Liberty junior varsity football team arrived at Courtland High School on Wednesday night in search of a victory.

Unfortunately for the Eagles, they left seeing blue.

Courtland amassed 389 rushing yards, and Liberty was never able to get untracked in a 32-0 loss.

The setback dropped the Eagles to 0-2 on the season.

“The effort wasn’t there [tonight], and it showed,” Liberty head coach Chad Patterson said. “You have to go out and give 110% on every play, which we didn’t do.”

Courtland’s vaunted Wing-T rushing attack wasted no time getting into high gear. On the Cougars’ first offensive play, running back Kwame Whittaker sprinted 39 yards to the Liberty 33-yard line. Three plays later, backfield mate E.J. Rogers took a handoff and went 26 yards off left tackle for a touchdown to put the hosts up 6-0 with 2:04 remaining in the first quarter.

Chasing after Whittaker and Rogers proved to be a regular occurrence for the Eagles. Whittaker racked up a game-high 167 yards and a score on 13 carries, while Rogers totaled 112 yards and a pair of touchdowns on just five attempts.

Rogers’ second trip to the endzone was a 58-yard jaunt on the third play of the second half, extending Courtland’s advantage to 18-0 at the time. Whittaker then raced 85 yards for a score on Courtland’s next possession, making it 24-0 and effectively taking any remaining wind out of Liberty’s sails.

Courtland head coach Tom Wingert was direct in discussing his squad’s strategy and its talent in the backfield.

“In that Wing-T, we basically want to run the ball down people’s throats,” he said. “We have some very talented halfbacks on our team who can do just that.”

The Cougars’ Mauricio Blanco also had a big night, rushing for 67 yards and a touchdown on six touches and recording an interception, a strip-sack and a fumble recovery for a score from his linebacker spot on defense.

Blanco tallied the strip-sack and fumble recovery touchdown all on the same play in the fourth quarter. He hit Liberty quarterback Landon Triplett as he was preparing to throw the ball from his own endzone, then fell on the loose ball to punctuate Courtland’s dominating performance.

“We’ve got a lot of kids who can do damage [on both offense and defense],” Wingert said. “Mauricio is one of them.”

Liberty only managed an anemic 39 yards of total offense and turned the ball over three times in the game.