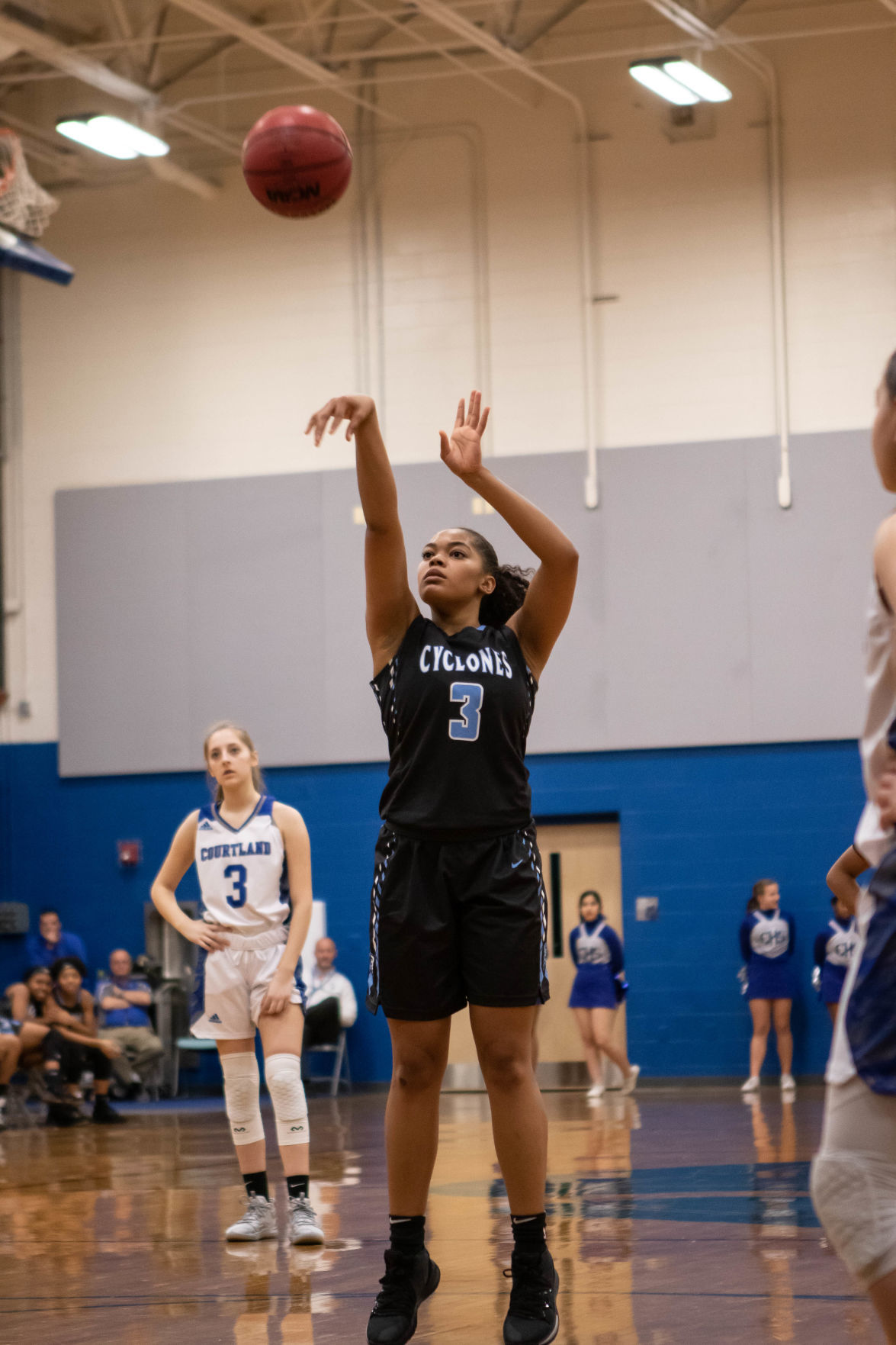 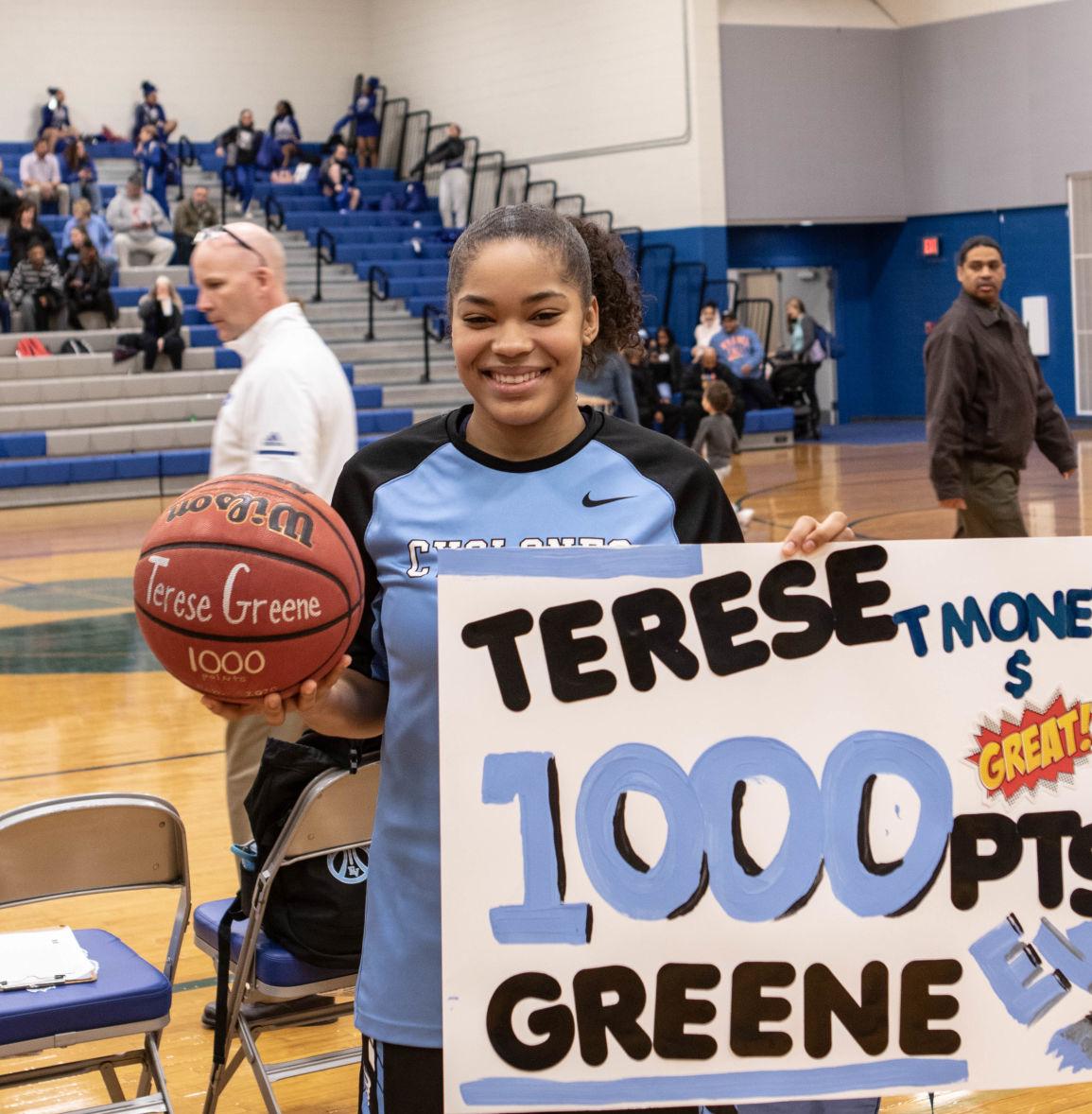 Eastern View’s Terese Greene poses with a commemorative basketball and poster that were presented to her after she scored her 1,000th career point Tuesday night. 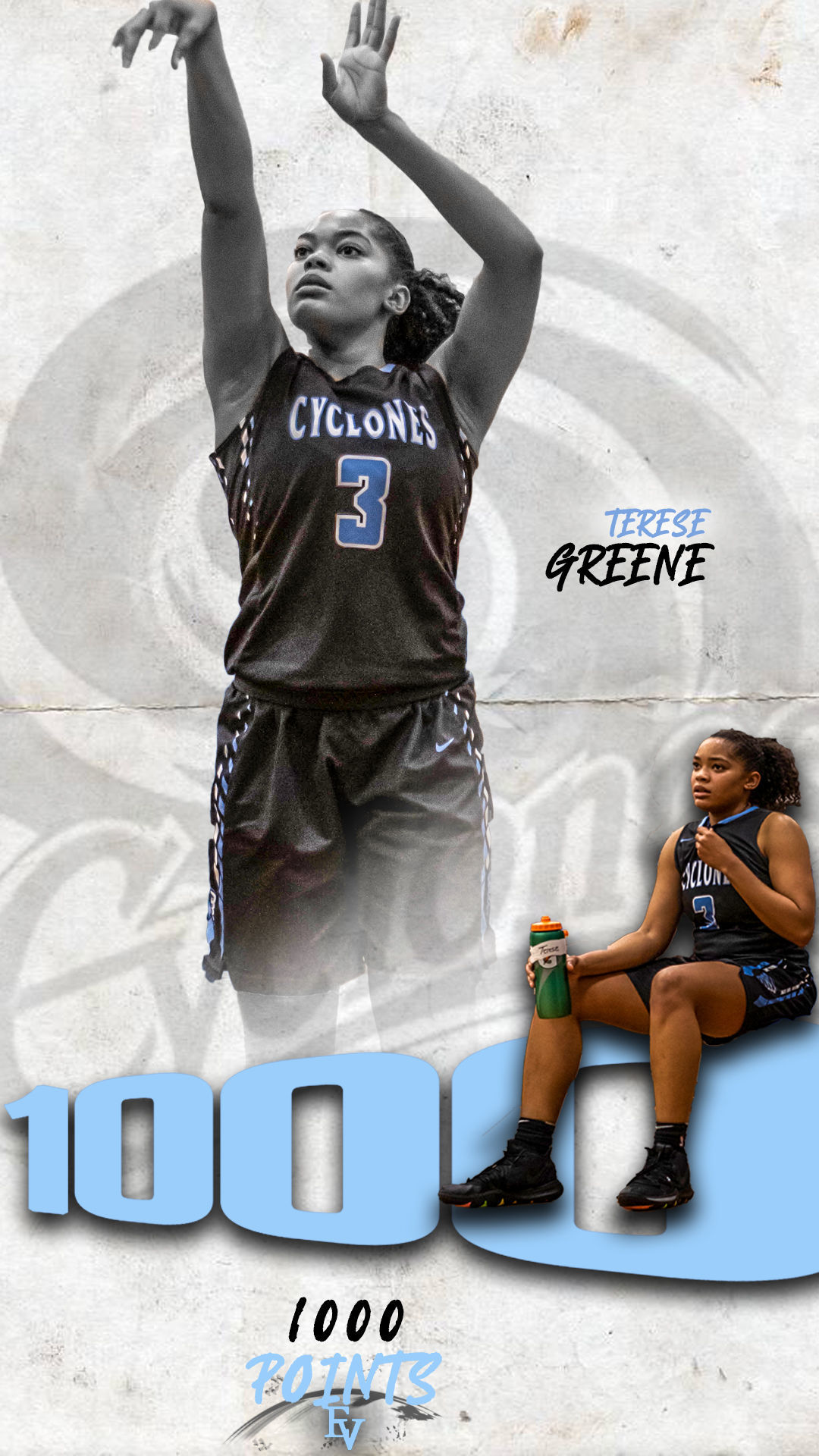 Eastern View’s Terese Greene poses with a commemorative basketball and poster that were presented to her after she scored her 1,000th career point Tuesday night.

Like many high school basketball players, one of Terese Greene’s individual goals was to score 1,000 points in her career.

However, even Greene herself couldn’t have predicted how quickly she’d reach the milestone.

Greene, a junior guard for the Eastern View girls basketball team, reached the mark after making a free throw midway through the first quarter of the Cyclones’ 58-26 victory at Courtland on Tuesday night.

“It’s absolutely a blessing,” Greene said by phone on Wednesday afternoon. “I thank God—not just for the success I’ve had early in my career that’s enabled me to reach [1,000 points] already, but just for being able to accomplish it at all.”

Greene has been nothing if not consistent during her time at Eastern View. She averaged 16 points per game as a freshman and 15 as a sophomore on her way to earning Class 4 all-state honors each time. This season, she’s putting up a career-high 17.3 per contest.

Cyclones head coach Mike McCombs said Greene’s consistency and overall success is a product of how she approaches the game.

“She understands that the team is what’s most important,” McCombs said of Greene. “She makes sure her teammates are involved in the offense, and she knows that if she plays unselfishly, the points and the accomplishments will all come naturally.”

That’s not to say Greene can’t take over a game when the situation calls for it though. She racked up 30 points in a 73-72 loss at Brooke Point last Wednesday, nearly propelling Eastern View to an upset victory over one of the top teams in the Commonwealth District. In a January matchup against Chancellor, she poured in a career-best 31 to buoy the host Cyclones to a 69-55 win over their Battlefield District rivals.

“The impact she’s had on our program has been tremendous,” McCombs said. “She continues to prove that hard work and persistence pays off, and she’s not even close to being finished at this level.

While Greene has already helped Eastern View make back-to-back state tournament appearances for the first time in school history, she admits there’s definitely some unfinished business she’d like to attend to before she graduates.

“It’s an honor to be considered one of the best players in the state, but it doesn’t compare to winning a [state championship] ring,” she said. “We still have a lot of work to do if we’re going to catch [2019 state champion] Lake Taylor, but I believe in myself and my teammates.”

Greene and the Cyclones (15-3 overall, 9-0 district) have already made serious inroads toward that goal. Last month, they defeated district power King George for the first time since 2017. If they can win their Feb. 17 rematch with the Foxes and stave off upset bids by Spotsylvania and Caroline, they’ll clinch the Battlefield’s regular-season title and the No. 1 seed in Region 4B’s north division, which would guarantee them home-court advantage for at least the first two rounds of the regional tournament.