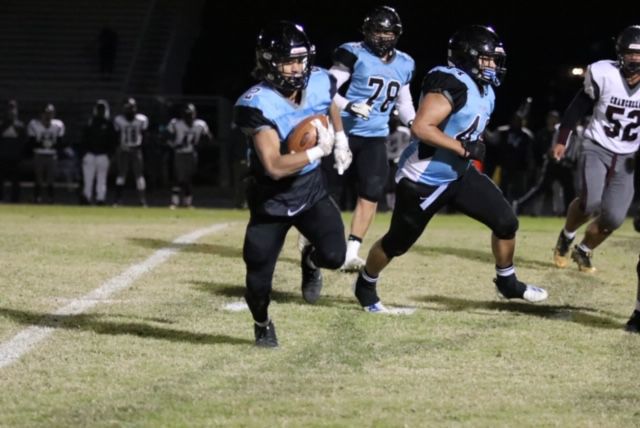 Eastern View’s Alex Spangler, the Battlefield District offensive player of the year, will look to lead the Cyclones past Dinwiddie in the Region 4B semifinals on Friday night. 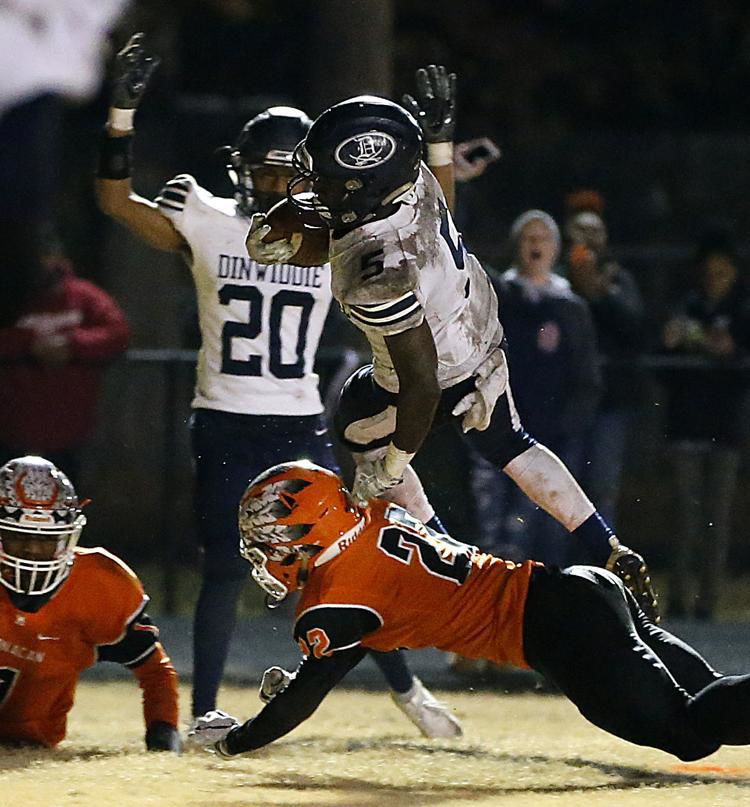 Dinwiddie’s Robert Barlow scores one of his seven touchdowns against Monacan last week.

Eastern View’s Alex Spangler, the Battlefield District offensive player of the year, will look to lead the Cyclones past Dinwiddie in the Region 4B semifinals on Friday night.

Dinwiddie’s Robert Barlow scores one of his seven touchdowns against Monacan last week.

If their playoff meetings in each of the past two seasons are any indication, Friday night’s Region 4B semifinal clash between Dinwiddie and host Eastern View should feature plenty of fireworks.

When the two teams squared off in the region semifinals in 2017, the host Generals used a field goal with 17 seconds remaining to edge the previously-unbeaten Cyclones 40-37 in a see-saw affair where both squads rallied from double-digit deficits.

Last year, the teams locked horns in the region championship game. With memories of the previous season’s heartbreak still fresh in its mind, visiting Eastern View never trailed on the way to a 45-35 victory that secured the program’s first-ever region crown.

However, the circumstances surrounding this year’s game are a bit different. The Generals (6-5) largely flew under the radar this fall after going a combined 23-3 over the last two seasons, while the Cyclones (10-1) saw their 44-game regular-season winning streak snapped in a Week 10 loss at Spotsylvania.

Despite the uncharacteristic blemishes for each team coming into Friday’s matchup, Eastern View head coach Greg Hatfield said he expects the intensity and level of play to rival that of their previous meetings.

“[Dinwiddie] is always so well coached,” he said. “Coach [Billy] Mills and I go back quite a ways, and he’s an excellent football coach who always has his team prepared to play, regardless of the circumstances.”

Now in his 15th season as Dinwiddie’s head coach, Mills has amassed a record of 132-48, leading the Generals to six district titles, four region championships and one state crown. He’s guided them to the state title game on two other occasions as well.

Mills’ coaching ability was tested early this season though, as Dinwiddie struggled to a 1-3 start. Two of the Generals’ early losses came at the hands of Commonwealth District powerhouses Massaponax (47-30) and North Stafford (33-29).

Dinwiddie regrouped, however, going 4-2 down the stretch to earn the region’s seventh seed. Then, in last week’s first round, the Generals shocked No. 2 seed Monacan 49-27 behind 232 rushing yards and seven touchdowns by Robert Barlow.

Barlow, a 5-foot-5, 150-pound speed demon, does it all for Dinwiddie. He’s amassed 1,664 yards and 30 scores on the ground so far this year, averaging 7.5 yards every time he carries the ball. He’s also caught 17 passes for 167 yards and a touchdown and returned a kickoff 85 yards for a score.

The Cyclones aren’t unfamiliar with Barlow. In last season’s game, he hauled in three receptions for 124 yards and two touchdowns, which covered 56 and 54 yards, respectively. He also carried the ball three times for 39 yards.

“He’s really, really good,” Hatfield said of Barlow. “Not only that, but [Dinwiddie] finds multiple ways to get him the ball. We have to put pressure on other guys to beat us, because we can’t have a repeat of what he did against Monacan last week and expect to win the game.”

The Generals’ offense is led by sophomore quarterback Brenton Hilton. While Hilton isn’t quite as dynamic as graduated all-state performer K’ymon Pope was, he’s still a danger to run or pass. Hilton has racked up 312 yards and four scores rushing and completed 100 of 183 passes for 1,319 yards with 12 touchdowns and seven interceptions.

Junior wide receiver Cedric Drumgoole is Hilton’s favorite target through the air, with 33 catches for 390 yards. Senior Collis Pride is Dinwiddie’s big-play threat in the passing game, with 20 receptions for 409 yards and four scores—an average of 20.5 yards per catch.

Eastern View’s defense forced five turnovers and held Huguenot to just 91 yards of total offense in last week’s 42-0 win. Raq Lawson, Alex Spangler and Josh Logan all recorded interceptions for the Cyclones, with Lawson returning his 27 yards for a touchdown.

“Our defense has been able to rise to the occasion against potent offenses in the past,” Hatfield said. “They’re going to have to do it again with these guys.”

Offensively, Spangler, the Battlefield District’s offensive player of the year, caught four passes for 75 yards and three first-half scores against Huguenot. Spangler now has 22 receptions for 643 yards and 13 touchdowns in his senior season.

Lawson also had a banner night in last week’s contest, racking up a career-high 170 rushing yards and scoring once to pace a Cyclones ground attack that rolled up 249 yards.

“We need to be balanced and take what the defense gives us if we’re going to be successful,” Lawson said.