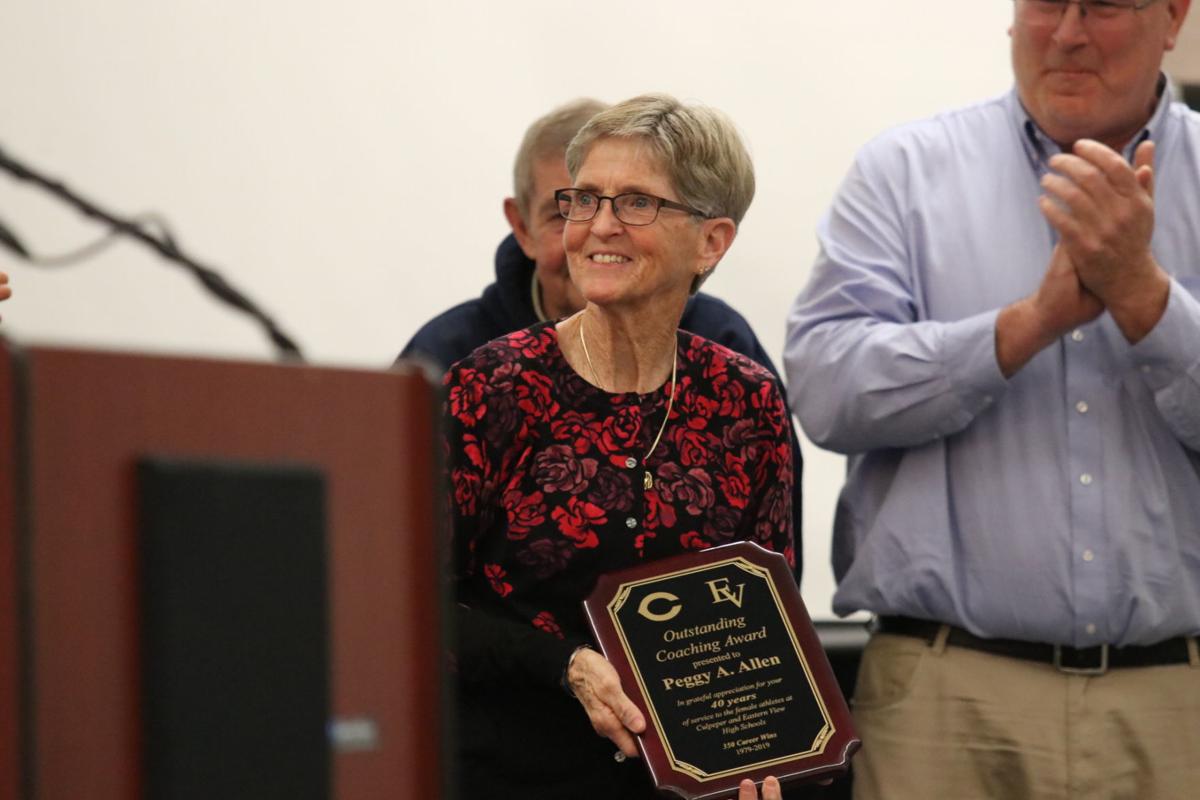 Eastern View field hockey head coach Peggy Allen smiles after being presented with a plaque for her 40 years as a coach at both Culpeper and Eastern View high school during a ceremony held on Thursday night at EVHS.  Allen has decided to retire after leading the Cyclones to their first state championship last November. 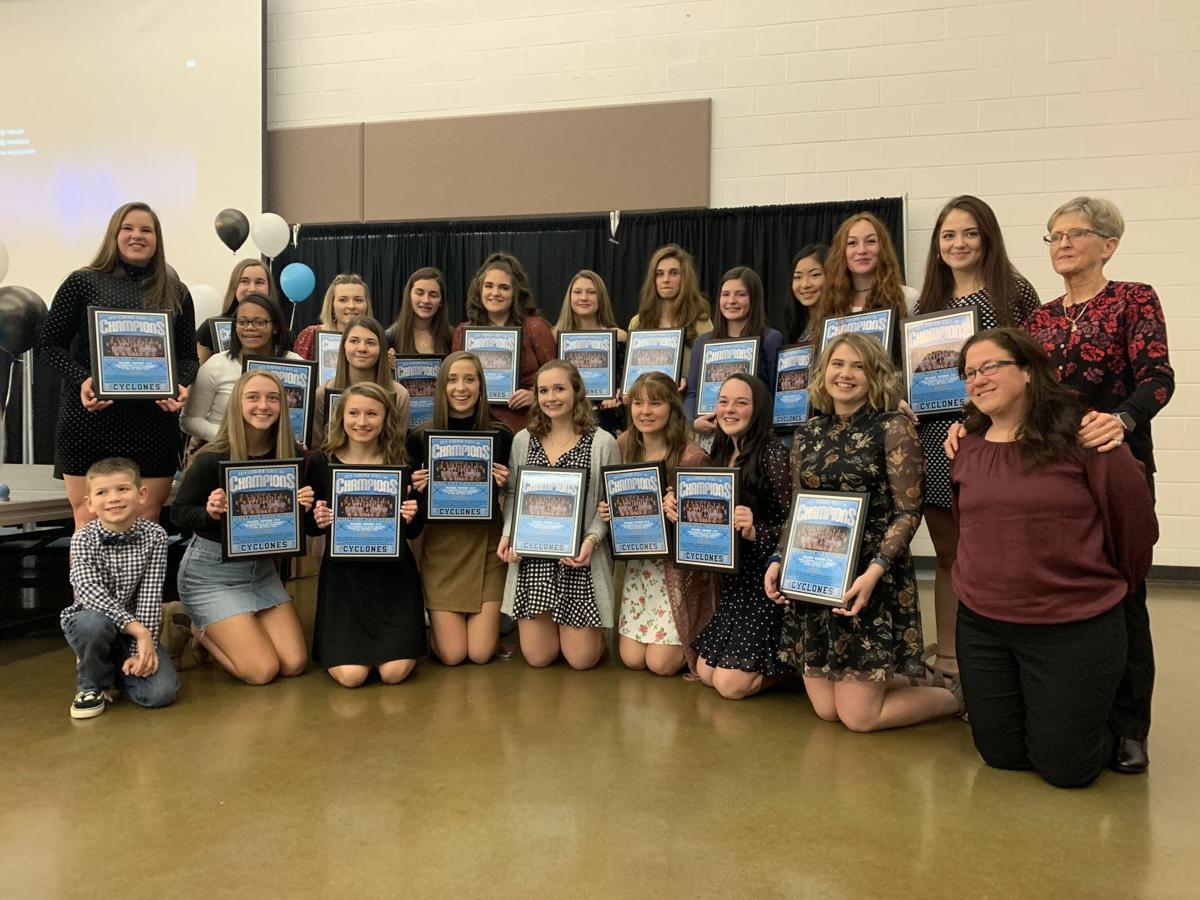 Members of the 2019 state champion Eastern View field hockey team pose with their plaques during a ceremony held on Thursday night. Retiring head coach Peggy Allen is pictured at the top right.

Eastern View field hockey head coach Peggy Allen smiles after being presented with a plaque for her 40 years as a coach at both Culpeper and Eastern View high school during a ceremony held on Thursday night at EVHS.  Allen has decided to retire after leading the Cyclones to their first state championship last November.

Members of the 2019 state champion Eastern View field hockey team pose with their plaques during a ceremony held on Thursday night. Retiring head coach Peggy Allen is pictured at the top right.

At the heart of the ceremony was Cyclones head coach Peggy Allen, whose retirement was announced by Eastern View athletic director Mark Settle during the event.

Former players, colleagues, school board officials and many others were on hand to show their appreciation for Allen, the West Virginia native who’s amassed 350 career wins while becoming a mainstay in the Virginia High School League field hockey scene for 40 years.

Allen began her coaching career at Culpeper High School in 1979, serving as a volunteer assistant to Blue Devils head coach Anne Boyd. She remained by Boyd’s side for more than a decade, even taking over as interim head coach in 1986 when Boyd needed to step away.

When Boyd departed for good following the 1989 season, Allen took over as Culpeper’s head coach, where she remained until the county opened its second high school, Eastern View, in 2008.

Settle, who’s the only AD the Cyclones have ever had, hired Allen, the only field hockey coach they’ve ever had as well.

“She’s a legend,” he said of Allen. “She’s a great coach who knows how to get the most out of her players. They want to succeed for her, which is why they’ve been so successful over the years.”

Allen’s former players were quick to point out that she helped mold them into the people they are today.

“Coach Allen is one of a kind,” said Caitlin Walker, a 2018 Eastern View graduate. “She doesn’t just create hockey players; she creates a family. She’s just amazing. She cares for her players on and off the field, and that lasts even after you graduate. I’m in college now, and she is still one of my main supporters.”

Settle described the program Allen has built as the closest thing you’ll find to a sorority at high school level.

“They’re a close group of girls that know how to have good, clean fun, while also making sure they are always respectful and classy,” he said.

Adding to the family element for Allen’s Cyclones has been the presence of her daughter, Marianne Bretschneider, as an assistant coach.

“The first thing I think of is how we’ve learned to communicate with each other over the years,” Bretschneider said. “It’s kind’ve funny, because we can look at each other and not say a whole lot, but convey a lot more with just a look.”

Bretschneider was on the sidelines with her mother when Eastern View came up short in back-to-back trips to the Class 4 state title game in 2017 and 2018. She admitted the hardest part about losing the first two times was rooted in how deeply she wanted a championship for her mother.

“To have that opportunity two times in a row and fall short each time really hurt,” she said. “So being able to get there for a third time and win it for her was an amazing feeling.”

“We were just excited about getting there the first time,” Allen said. “When we lost the second time, we were just so angry. We always set our goals before the season starts, and the last goal is always to win states. We knew we had a lot of work to do the third time around, and we did it.

“I have never been as proud of a bunch of kids as I was of this one,” she continued. “They worked so hard and were just so resilient. On their plaque, it says, ‘From underdogs to state champs,’ because we were always the runners-up. We beat three regional champions to become state champions.”

Last November, Eastern View defeated Region 4D champion Heritage (Leesburg) 3-0 in the state quarterfinals and 4B kingpin Lee-Davis 7-1 in the semifinals before ultimately downing 4A titlist Great Bridge in a dramatic 3-2 overtime tilt for the championship.

Throughout their march to the title, the adage “The third time’s the charm” became a rallying cry for the Cyclones.

On Thursday night, members of the team beamed with pride as they were presented with their championship rings.

“You see how hard these kids work,” a proud Allen said. “Marianne and I aren’t the easiest people to deal with, either. Whether we won or lost, we would come back to practice after a game and get on them about what they could do better. I was just so happy for them to finally be able to get over the hump. We finally did it.”

Senior forward Sarah Hatfield, a VCU commit who finished in the top 10 nationally with 136 career goals while playing for Allen, gave her coach all the credit for the player she’s become.

“Playing for Coach Allen has truly been great,” she said. “She’s the one who got me into this amazing sport, and I’m incredibly proud to be able to say I’ve been a part of her legacy.”