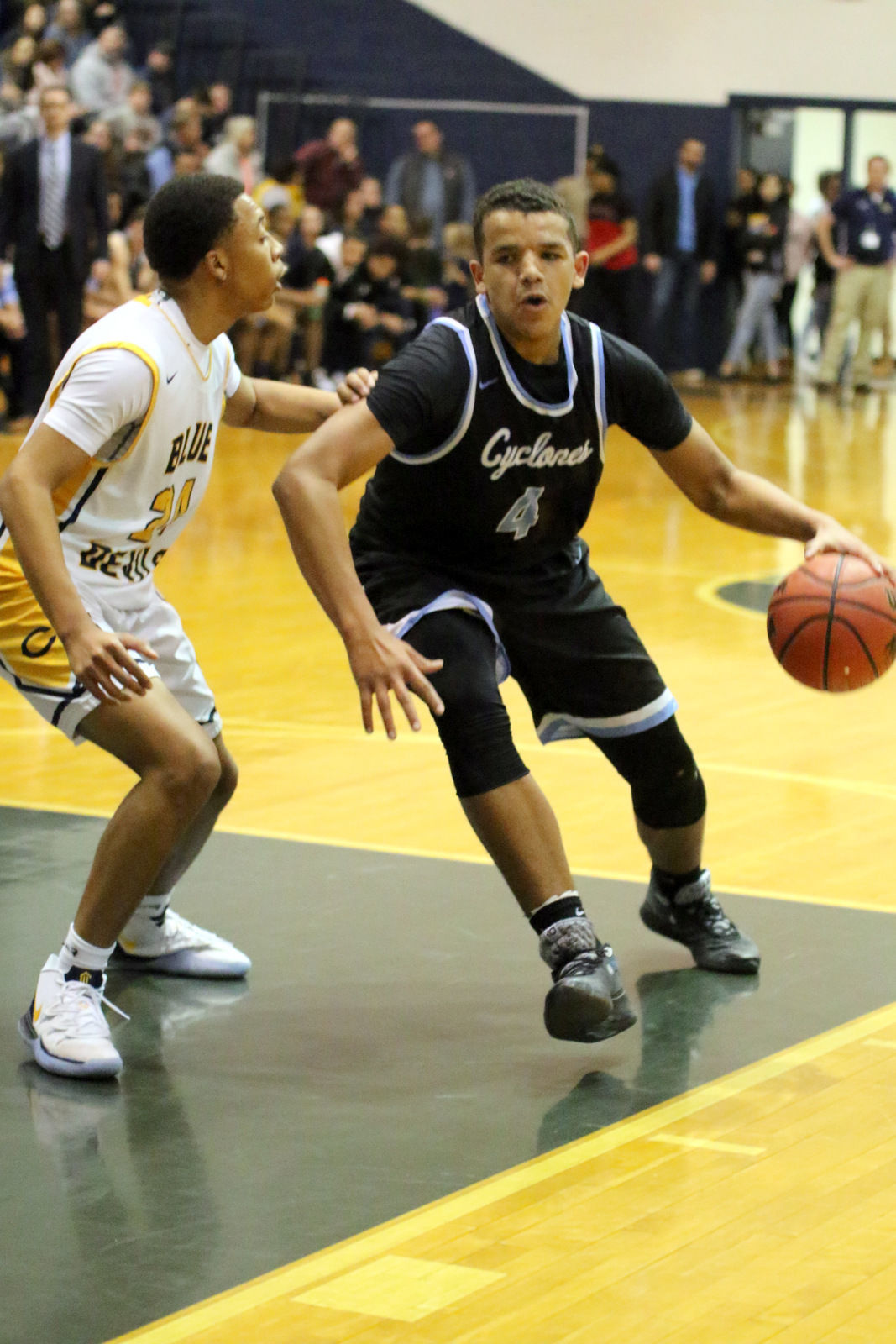 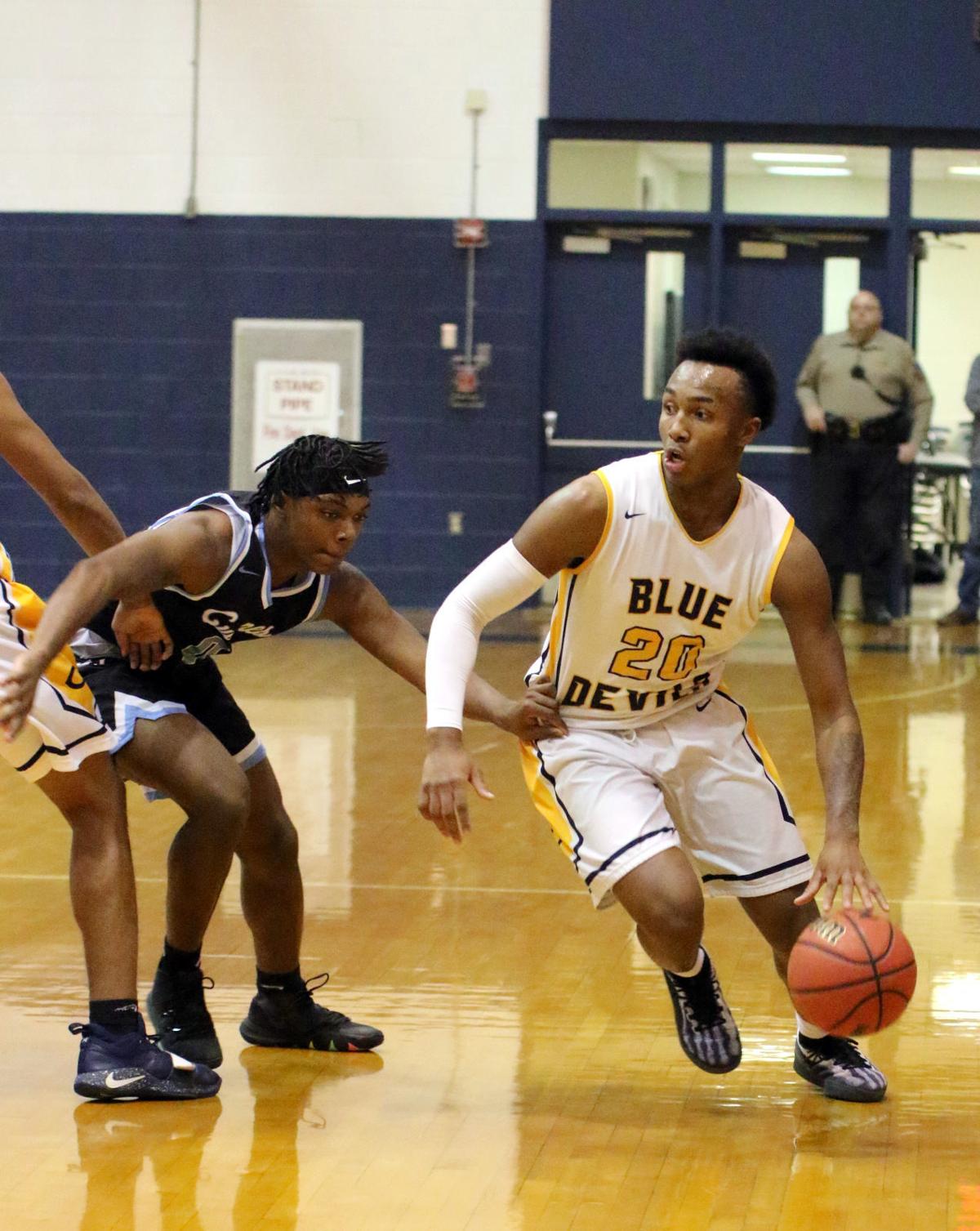 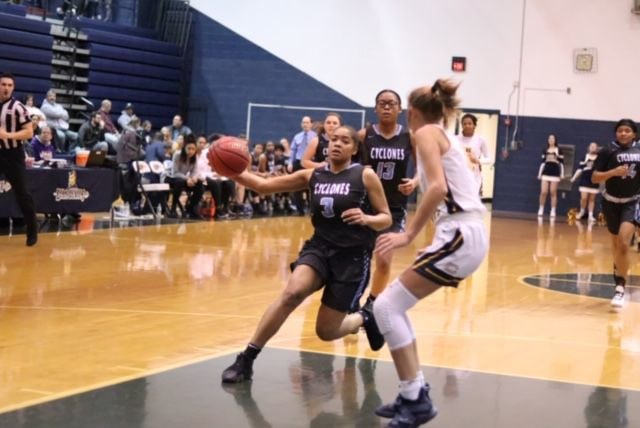 Eastern View’s Terese Greene, left, drives to the hoop for two of her game-high 15 points against Culpeper.

Eastern View’s Terese Greene, left, drives to the hoop for two of her game-high 15 points against Culpeper.

When Quentin Butler’s third-quarter layup gave the Culpeper boys basketball team its first lead of the game against crosstown rival Eastern View on Thursday night, it seemed like the Blue Devils had all the momentum on their side.

After trailing by as much as 13 points in the first half, Culpeper had scratched and clawed its way back within two, 28-26, by intermission. Butler’s tally gave the Blue Devils a 31-30 advantage, bringing the pro-Culpeper crowd packed inside Kate Carter Gymnasium at Culpeper Middle School to its feet.

However, the precarious position served only to light a fire under the Cyclones.

Buoyed by contributions from up and down its young lineup, as well as the return of senior standout Blake Leake, Eastern View answered Culpeper’s challenge with a resounding 29-6 run, turning a close game into a runaway 66-49 victory.

The win is the Cyclones’ second in a row, and it gives them a season sweep over the Blue Devils.

“We played really well down the stretch in our last game, so we definitely wanted to carry that momentum over to tonight,” Eastern View head coach Patrick Thornhill said. “To their credit, the guys were able to keep it rolling.”

The Cyclones’ pivotal run lasted exactly the length of a quarter, beginning after Butler’s basket with 5:30 remaining in the third period and ending on Corey Long’s layup that made it 59-37 with 5:30 left in the fourth.

Long, a 6-foot-4 sophomore, scored 14 of his team-high 16 points during the stretch, showing off his soft touch around the basket.

“My teammates did a great job getting the ball to me in good spots,” Long said. “It was all about their unselfishness and willingness to share the basketball.”

Long wasn’t the only sophomore who made an impact for Eastern View (3-4). Rickey Butler scored eight of his 10 points during the run, sinking 3-pointers at both the end of the third quarter and the beginning of the fourth. He also harassed any Culpeper shooter who dared enter the paint, utilizing his 6-foot-5 frame to block seven shots on the night.

“Corey and Rickey were both huge in helping us dominate the paint,” Thornhill said. “Not just in their ability to alter and block shots, but the way they rebounded for us as well.”

Leake, who had been sidelined since fracturing his left thumb in a football game on Nov. 8, totaled eight of his 10 points in the second half after coming off the bench. A first-team all-Battlefield District selection last season, he said he was just happy to be on the court.

“It felt great just to be back,” he said with a smile. “The rest of these guys made it easy for me to kind’ve slide back in after being out for two months.”

Junior guard Bryan Maxie was the fourth Cyclone to reach double figures in the scoring column, contributing 14 points to their cause.

Culpeper (1-7), which dropped its fifth game in a row, was paced by a game-high 21 points from senior Dejour McCray, but no other Blue Devil was able to reach double figures.

“Dejour is working really hard for us,” Blue Devils head coach James Thompson said. “We’re trying to get some other guys to step up and complement his efforts, but it’s just really tough right now with all the young players we’ve got. I think the guys are just mentally drained, really.”

Eastern View earned a 55-19 win in the girls game, giving it a season sweep as well.

“It’s always nice to get a win against your crosstown rival, but I don’t think we played very well tonight to be honest,” Cyclones head coach Mike McCombs said. “We executed better in the second half though, and I know in games like this the girls have a bunch of nerves.”

Three straight Culpeper turnovers helped Eastern View (6-2) build a 12-8 lead late in the first quarter. The Cyclones then extended their advantage to 27-12 by halftime and never looked back.

“I thought we started the game off pretty well and had good energy going in,” Blue Devils head coach Tony Majors said. “The turnovers in the last minute of the [first quarter] halted any momentum we had, and Eastern View took advantage of that.”

All-state guard Terese Greene, who missed the last four games for the Cyclones due to undisclosed reasons, scored 15 points in her return.

“Whenever you take away a two-time all-state player, it definitely calms everybody’s nerves when they come back,” McCombs said. “I think we also grew as a team while she was out though, because some kids had to step up and contribute more than they would have with Terese in the lineup.”

Culpeper (3-6) was without one of its top performers in Amber Fairfax, who missed the contest due to a sprained knee.

“It’s tough,” Majors said of Fairfax’s absence. “She has a MRI scheduled later this week.”