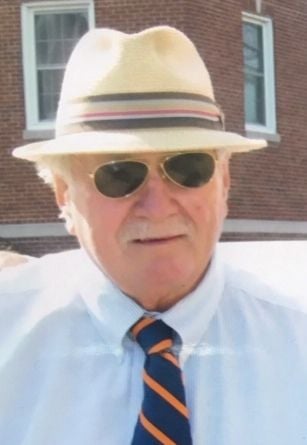 William Earl Hazel, 80, of Buckland, Virginia passed away peacefully Sunday, April 26, 2020 at Novant Health UVA Health System Prince William Medical Center. Born on July 12, 1939 in Atlanta, Georgia to the late Evelyn and Samuel Hazel, Bill and his family lived in both Richmond, Virginia and Chattanooga, Tennessee prior to settling in Madison County, Virginia in the early 1950s. After graduating from Madison County High School in 1958, Bill spent two post-graduate years at Woodberry Forest School before matriculating to the University of Virginia, where he graduated with a degree in economics in 1964. As a student athlete he played on the varsity football team on both the offensive and defensive lines and was a proud and active member of the Kappa Alpha Order. Upon his graduation from Virginia, Bill applied his innate sales and marketing skills in different industries from assisting his father in the milk distribution business to successfully promoting and selling Ocean Spray product lines to grocery chains in the northeast corridor. Towards the end of his career, he joined his father and brother in heavy trucking equipment sales and distribution. Together they owned three successful outlets in northern Virginia. Beyond his career, Bill was a true Virginia Gentleman and was devoted to his Cavaliers. He rarely missed a home football game, loved a good tailgate and could usually be found at the "The Barn" enjoying the infamous prime rib dinner following the game. He also loved college hoops. He watched every game of the "Unbelievable" season when the Hoos won the national championship in 2019, something he never thought he'd see. As a proud member of the Culpeper Country Club, Bill was a natural storyteller and loved to sit on the front porch and spin yarns with those around him. If some oldies (especially songs from the Doo-Wop era) were playing in the background, so much the better. In addition to his parents, Bill is preceded in death by his wife Rose G. Hazel and his brother, James G. Hazel. He is survived by his children A. Darnell Abbott of Halifax, Virginia, William L. Hazel of Richmond, Virginia and Hillarye M. Nicely of Buckland, Virginia and six grandchildren. A private graveside service will be held in Fairview Cemetery in Culpeper, Virginia. In lieu of flowers, please make memorial contributions to the Virginia Athletics Foundation, Post Office Box 400833, Charlottesville, Virginia 22904-4833. An online tribute wall and guestbook are available at www.foundandsons.com Found and Sons of Culpeper is serving the family.