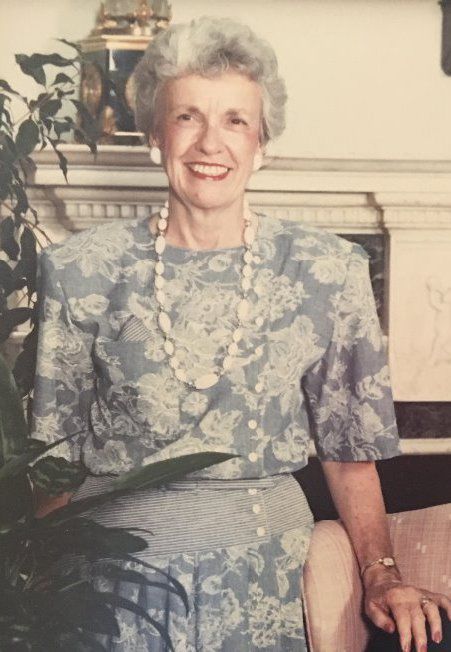 MITCHELL, Elizabeth Ashby Griffin, of Culpeper, Virginia, passed away on Saturday, February 15, 2020 at The Culpeper, formerly The Culpeper Baptist Retirement Community. She was 92. She was preceded in death by her husband of 58 years, Malcolm Meredith Mitchell, her parents, Samuel Ashby Griffin and Elizabeth Ruff Griffin, and two sisters, Frances Moreland Griffin and Louise Griffin Bruce. She is survived by a son, Malcolm Meredith Mitchell, Jr. and his wife, Lura Nell Triplett Mitchell, of Alexandria, Virginia, a daughter, Martha Ashby Mitchell Aiken, and her husband, Joseph Heustess Aiken of Charlotte, North Carolina, four grandchildren, Taylor Edward Mitchell and his wife Heloise McKee Mitchell, Meredith Elizabeth Mitchell, James Mitchell Aiken, and Berkley Elizabeth Aiken. She is also survived by one great grandchild, Catharine Kavanaugh Mitchell. Ashby was born and raised on a farm near Griffinsburg, Virginia in Culpeper County. She attended Culpeper County Schools, graduating from High School in 1944, and attended Mary Washington College, graduating in 1948. After the birth of her two children, Ashby became a Math teacher at Culpeper County High School teaching Algebra II and Trigonometry over the course of 30 years. While there, she served as Chairman of the Math Department and also earned a Masters Degree in Mathematics Education from The University of Virginia where she graduated in 1974. Her dedication and love for teaching set a wonderful example for future educators and was recognized when she was named the Culpeper County Teacher of the Year in 1976. In the early 1980's she and her husband traveled each summer in the United States, including Hawaii and Alaska and many countries in Europe. She retired from teaching in 1987. After retirement, they continued to travel. In 2006, they moved from their home on Blue Ridge Avenue to a cottage at the Culpeper Baptist Retirement Community. Ashby was always an avid gardener, well known for her beautiful roses. She was an active member of the Culpeper Garden Club, serving as Treasurer and also as President for 2 terms. She was a member of The Virginia Federation of Garden Clubs and a member of The Academy of Gardeners. She was also a Charter Member of the Country Club of Culpeper. The family would like to send their sincere and heart-felt appreciation to the staff of The Culpeper for all of their care and love shown our mother for many years. A funeral service will be held in the Culpeper Baptist Church, Wednesday, February 19, 2020 at 11:00am with Pastor Dan Carlton officiating. Following the memorial service the family will receive friends in the fellowship hall of the church. The interment will be private in Fairview Cemetery. In lieu of flowers, memorial contributions may be made to Culpeper Baptist Church, 318 S. West Street, Culpeper, Virginia 22701 or to The Culpeper, 12425 Village Loop, Culpeper, Virginia 22701. An online guestbook and tribute wall are available at www.foundand sons.com. Found and Sons Funeral Chapel of Culpeper is serving the family.