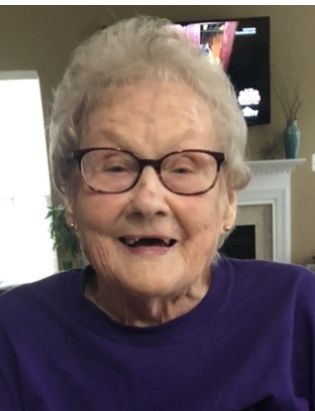 Hazel Jenkins Deal, 92, of Culpeper passed away Saturday, December 21, 2019 at English Meadows in Culpeper, VA. She was born September 10, 1927 to the late Dennis Grimsley and Grace Lillard Jenkins in Rappahannock County, VA. She was a member of Reynolds Memorial Baptist Church. Hazel was well known for her good home cooking and shared her favorite recipes at Deal's Sandwich Shop in Sperryville which included homemade barbeque and country ham sandwiches. Most importantly she was a loving mother, grandmother and great grandmother. Hazel is survived by her seven children, Don Deal and his wife, Linda of Culpeper, Nancy Taylor and her husband, McKinley of Luray, Wayne Deal of Advance, NC, William Deal of Wolftown, Pamela Deal of Culpeper, Tony Deal of Sperryville, and Joyce Lindsey and her husband, Ray of Brightwood; four grandchildren, Michael Deal and his wife, Patricia, Bryan Deal and his wife, Julie, John Taylor, and Karen Stoneberger and her husband, Jeffrey; and great grandchildren, Heather Taylor, Melissa Irvine, Katelyn Taylor, Jordan Stoneberger, Collin Stoneberger, Zachary Swarens, Nathan Swarens, Jack Deal, Chloe Deal, Evelyn Deal, and Bennett Deal. In addition to her parents, Hazel is preceded in death by her husband of 69 years, Lester William Deal; son, Joseph Deal; sister, Margaret J. Spicer; and step-brother, William K. Smith. A funeral service will be held on Thursday, December 26, 2019 at 11 a.m. at Found and Sons Funeral Chapel of Culpeper, 850 Sperryville Pike with Pastor Doug Farmer officiating. The family will receive friends one hour prior to the service. Interment will be at Etlan Cemetery at 2:30 p.m. Pallbearers will be Joyce Lindsey, Pamela Deal, Michael Deal, Bryan Deal, Jack Deal, John Taylor, Ray Lindsey. The family would like to thank the Hospice of the Piedmont and the entire staff at English Meadows Culpeper, especially Brook Jolliffe and Shelia Moss, for taking such loving care of our mom. In lieu of flowers, the family ask for donations to be made to the Hospice of the Piedmont, Attn: Advancement Office, 675 Peter Jefferson Parkway, Suite 300, Charlottesville, VA 22911 in memory of Hazel Deal. An online guestbook and tribute wall are available at www.foundandsons.com Found and Sons Funeral Chapel of Culpeper is serving the family.

To plant a tree in memory of Hazel Deal as a living tribute, please visit Tribute Store.
+1
+1