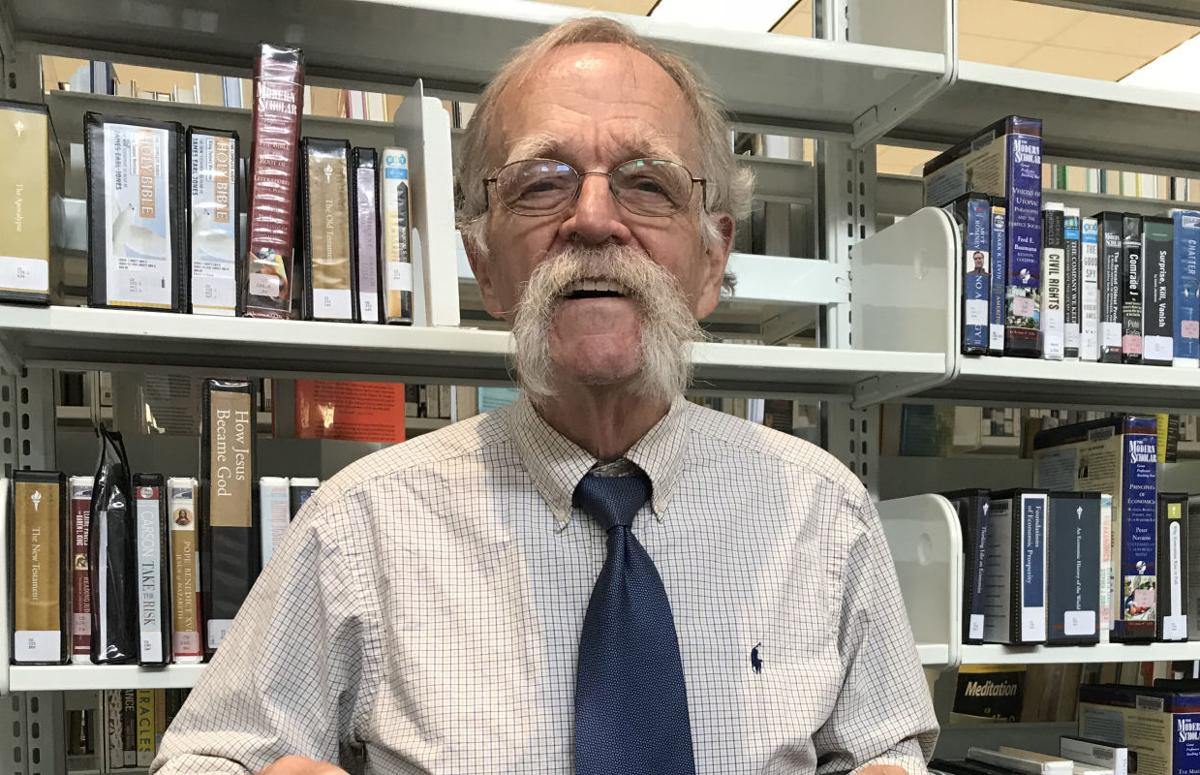 Mark Root, a front-desk associate at the Culpeper Library, shows the t-shirt he got while working at Woodstock 50 years ago. Root worked installing PVC water pipes throughout the concert site to keep the attendees hydrated. 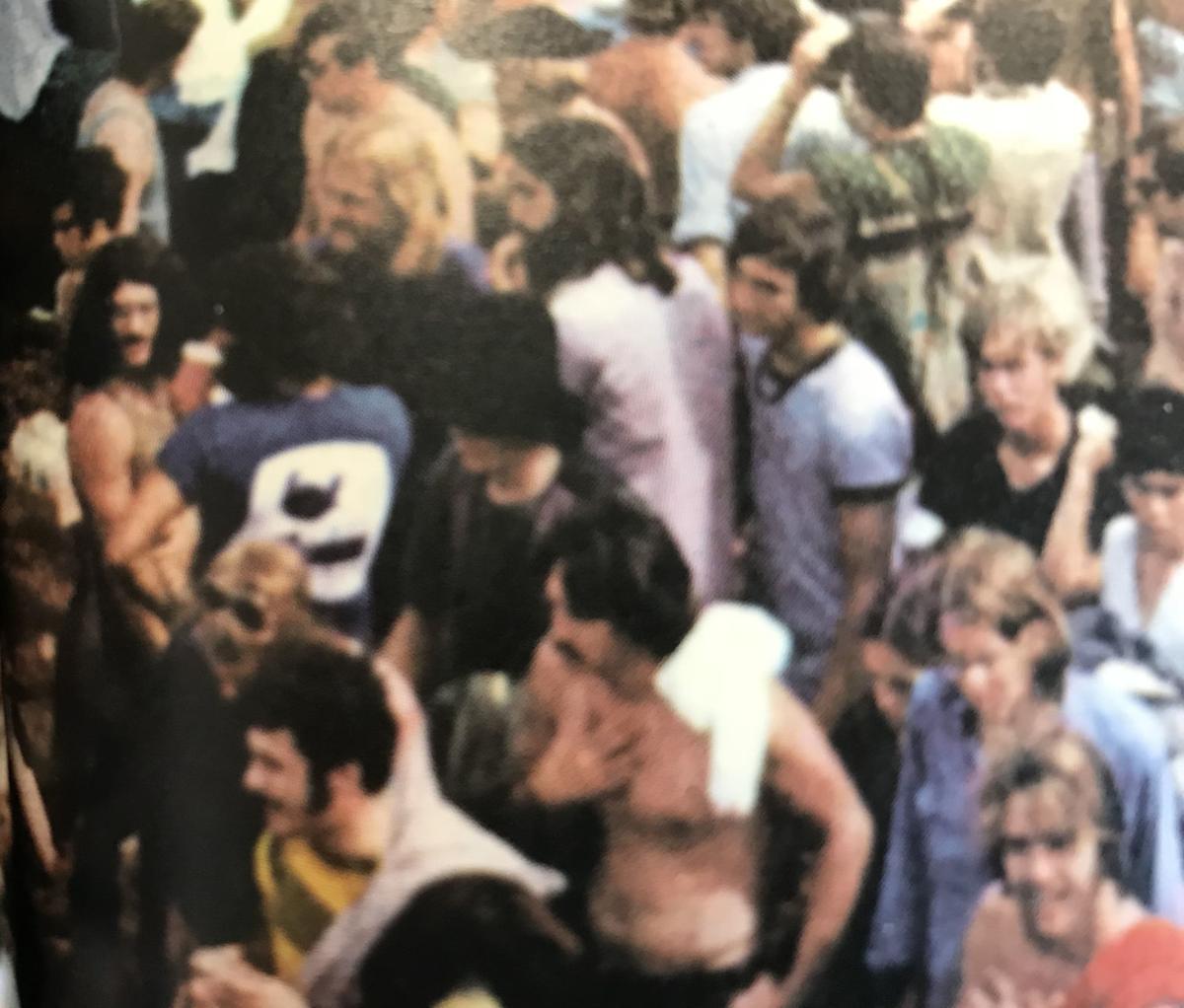 Detail of a photo from the Time Life Books title, “This Fabulous Century: 1960-1970,” published 1970, shows Culpeper librarian Mark Root, at top left with blond hair and a beard, at Woodstock in 1969. 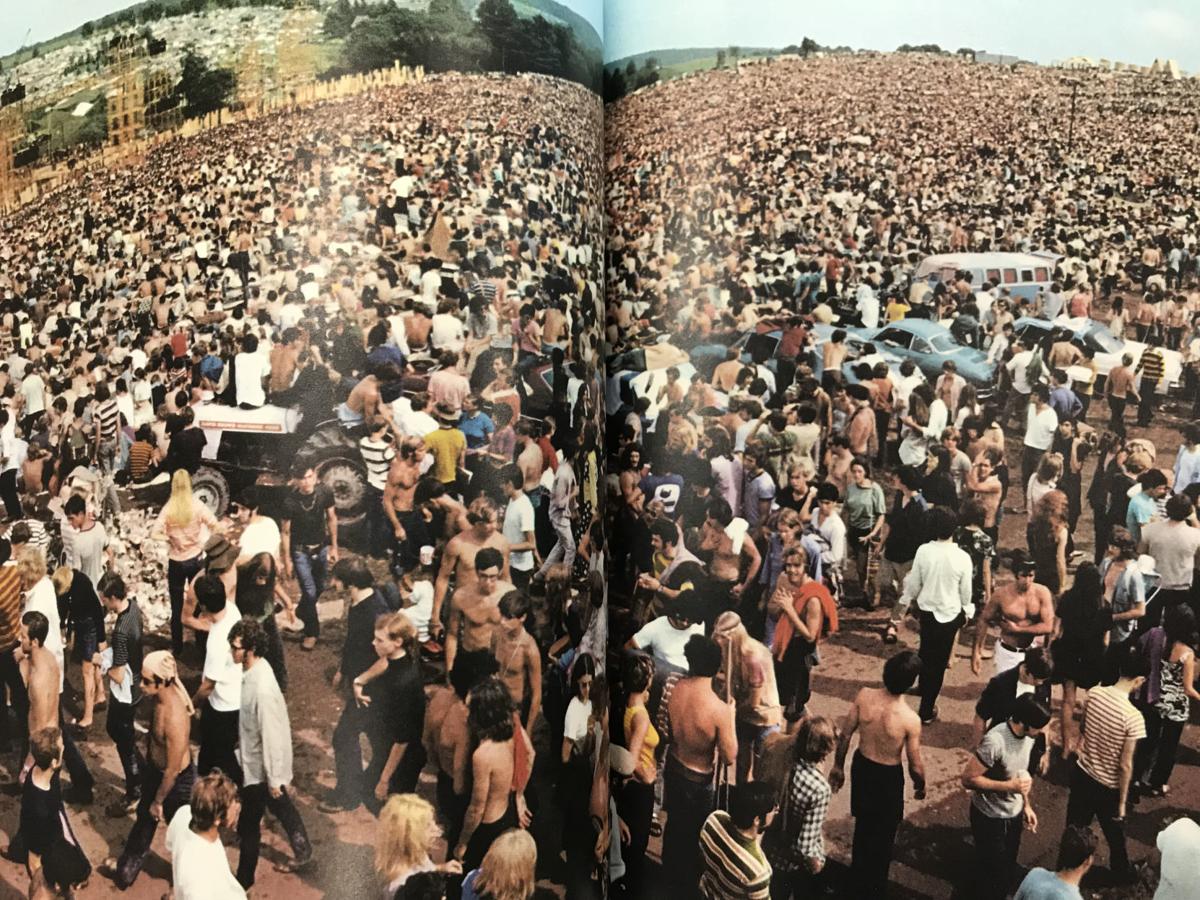 Madison County resident Mark Root is pictured in this image from the Time Life Books title, “This Fabulous Century: 1960-1970,” portraying the crowd of 500,000 people who showed up for the Woodstock Music Festival in 1969. 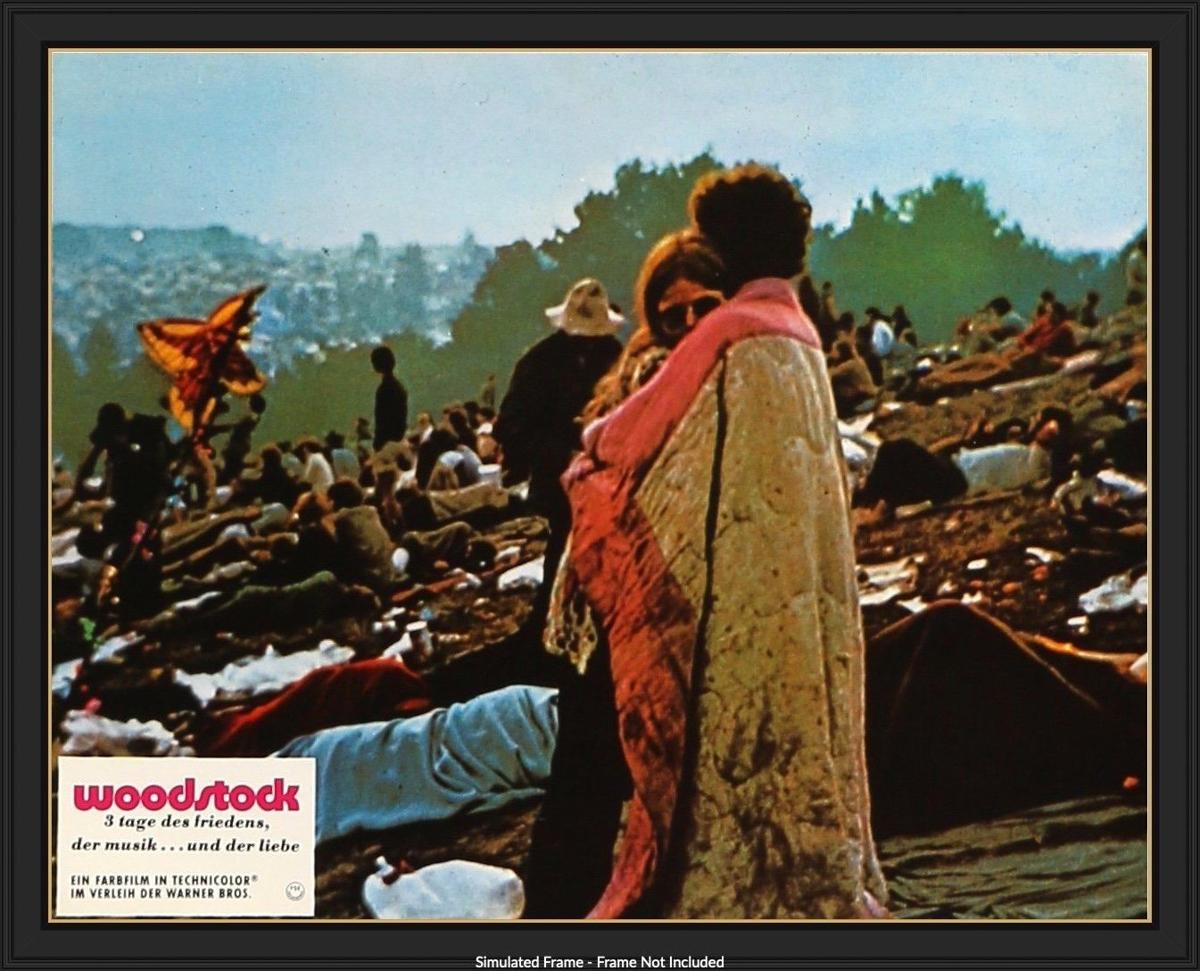 The Library of Congress Packard Theater in Culpeper recently showed the documentary of the Woodstock Music Festival, which happened 50 years ago.

Mark Root, a front-desk associate at the Culpeper Library, shows the t-shirt he got while working at Woodstock 50 years ago. Root worked installing PVC water pipes throughout the concert site to keep the attendees hydrated.

Detail of a photo from the Time Life Books title, “This Fabulous Century: 1960-1970,” published 1970, shows Culpeper librarian Mark Root, at top left with blond hair and a beard, at Woodstock in 1969.

Madison County resident Mark Root is pictured in this image from the Time Life Books title, “This Fabulous Century: 1960-1970,” portraying the crowd of 500,000 people who showed up for the Woodstock Music Festival in 1969.

The Library of Congress Packard Theater in Culpeper recently showed the documentary of the Woodstock Music Festival, which happened 50 years ago.

Before bottled water was commonplace, Mark Root of Madison County helped lay the pipe that quenched the thirst of some half-million fans at one of the largest outdoor music festivals in history.

On this, the 50th anniversary of the Woodstock Music & Art Fair, Root remembered the time he and his college buddies showed up at the farm in Bethel, New York for the promise of work and to hear rocking music during a time of change and revolution.

Now the front-desk associate at Culpeper Library, Root recalled, “It was real clear long before it happened that this was going to be a crazy event.”

Students at the State University of New York, Root, then 21, and his friends had the summer of 1969 off, and Woodstock was not their first stop. In June of that year, they took off for the first-ever Newport Jazz Festival in Rhode Island to see and hear multi-genre music greats like James Brown, Led Zeppelin, Jeff Beck, The Who and Jethro Tull.

“It was this big rock concert and we all thought, wow, this is fantastic,” said 71-year-old Root, a former longtime teacher at William Monroe Middle School in Greene County. “Then we got word that there were some guys from New York my friends knew, Artie Kornfeld and Michael Lang, who were going to do another concert that summer.”

That concert was Woodstock, and Kornfeld and Lang were its co-creators. A little more than two weeks prior to the four-day event August 15 to 18, 1969, the college buddies took off for Bethel, New York to help set it up. As part of the official crew at the event, Root and his friends got the iconic blue t-shirt, depicting a bird perched on the end of a guitar. He still has his shirt and hasn’t washed it in 50 years.

Tasked with laying PVC water pipe throughout hundreds of acres at the dairy farm, Root got it done.

“We put in miles of this plastic pipe—it was going in all directions,” he said. “Fortunately, it did work. We did indeed get water caps put in all over this gigantic field.”

In the weeks leading up to Woodstock, Root and his friends got put up in a hotel in nearby White Lake and were provided food by the concert’s organizers. It was an electric time in history.

“There were so many cross currents,” he said. “While we were there doing the work, about a week before the concert, the Manson murders happened, we were sickened by it. The previous month, man had walked on the moon. The whole time was just like, wow, all this stuff going on.”

Not to mention Woodstock. Five or six days before the concert started, there were some 35,000 people milling around on site, Root recalled. The organizers instructed the set-up crew to remain at the farm as access to and from town quickly got blocked by the many thousands of cars abandoned on roads leading in to the festival.

“If you look at pictures, there was a multi-acre property behind the stage and it had all kinds of vehicles and people were sleeping in the vehicles,” Root said. “We fortunately had an old panel van that we were able to stretch out in and sleep in.”

half out of control

Masses of people started to arrive.

“There’s no cell phones, nobody’s taking pictures, there’s no internet so it was just word of mouth, but obviously word of mouth was working pretty well because days before the concert, the area was just overrun,” Root said. “They were furiously trying to finish the fencing, but finally gave up, said, it’s going to be whoever comes, comes.”

As the music started and the nights ran late, the original stage crew members needed to sleep so he got promoted to working on stage, borrowing from experience gained working with rock bands in high school while growing up in Syracuse, New York.

“Nobody saw all the music because the guys who were originally on the stage crew had to quit because, what are you going to do, stay up for 72 hours?” Root said.

A stage that was supposed to rotate so two bands could set up a time broke the first day, he said.

“I mean, like everything about it, it was just crazy and half out of control,” Root said. “My biggest remembrance of the whole thing was it was something that you endured. You wanted to see the music, there were tremendous gaps in between the music actually being on the stage, and the weather went bad and so you had to endure it. Even we who had a place to get out of the weather, it was an endurance thing to make it through the whole thing.”

During the four days, Roots occasionally wandered out from the relative safety behind the stage to mingle with the massive crowd.

“That was a good thing about it—by and large everybody was really kind and helping to each other,” he said. “It was kind of miraculous that many people could be jammed in like that and handle it. You couldn’t go buy a burger, you couldn’t go get a soda, you couldn’t do any of that stuff. You had to count on somebody being kind to you. It was everybody trying to take care of everybody else and hang in there and see the music because it was an ordeal.”

Root noted the pipes he had laid functioned properly for the length of the festival so people did have water to drink. In between winks of sleep, bathroom breaks, eating what could be found and generally just trying to survive, the young man listened to the music.

First day act Johnny Winter, who Root would months later go on the road with, was fantastic, he said, while folk singer Joan Baez was not that good, said the native New Yorker.

Richie Havens went on and on with this song about Freedom, Root said, before Ravi Shankar came out with his sitar. “Who wanted to sit there and listen to that?” he said, adding Arlo Guthrie was another folkie.

Day two highlights included Santana, “who was basically almost unheard of and just blew everybody away,” Root said. John Sebastian was good, Canned Heat was like “this boogie music,” Mountain was rock and roll, and by the time Grateful Dead came on, it’s like 10:30 p.m.” and after a long day it was raining and miserable,” Root said.

Janis Joplin came on at 2 o’clock in the morning, “Come on,” said Root, followed by Sly and the Family Stone at 3:30 a.m. and The Who at 5 a.m. On day three, Joe Cocker took the festival by storm.

“People are like, who’s this guy? And what kind of music is this because he was so weird, he was different,” Root said. “Blood, Sweat & Tears, never did do it for me,” he added, going down the band list while, “Crosby, Stills, Nash & Young, that was one of their first concerts. They come out with all the western gear, leather jackets, fringe, hats with feathers in it, we’re like, wow, who are these guys, it’s so long ago, there was no country rock thing, but they were almost like heading it in that direction. They were very good.”

“Hendrix was there all that night, from like midnight on and they kept telling him, Jimi do you want to play? And he kept deferring, it was his choice to wait to the very end,” recalled Root, a tough critic.

“Most of Hendrix’s set wasn’t that great, but then when he played the Star-Spangled Banner, everybody’s like, oh, wow because that was the first time he had done that. It was really inspiring, listen to him, he’s just raving, going crazy and it did sound like the war—‘69 was a terrible year for the war, lots of people dying, lots of guys back from the war that were telling stories, it was a rough summer to say the least.”

While many of his buddies left early, Root stayed until the very end and for a few days after to get paid, about a couple of hundred dollars for helping with the set-up. He called it a memory of a lifetime.

“It was just a few hundred thousand middle class kids off trying to find some music and have a good time. That’s why we were there,” Root said. “I knew then there’s no way anything of this magnitude will ever happen again. They barely made it happen there in a much more innocent time.”

Years later, Root’s mother found a photo of her son in the large crowd at Woodstock in a Time Life Books title, “This Fabulous Century: 1960-1970.”

“I’m this blond, bearded guy right here, this is a guy I went to high school with and there’s the shirts that we wore,” he said.

Root once visited the Woodstock museum at the concert site in Bethel and showed them his original shirt. “They tried to get it away from me and I said, no way.”