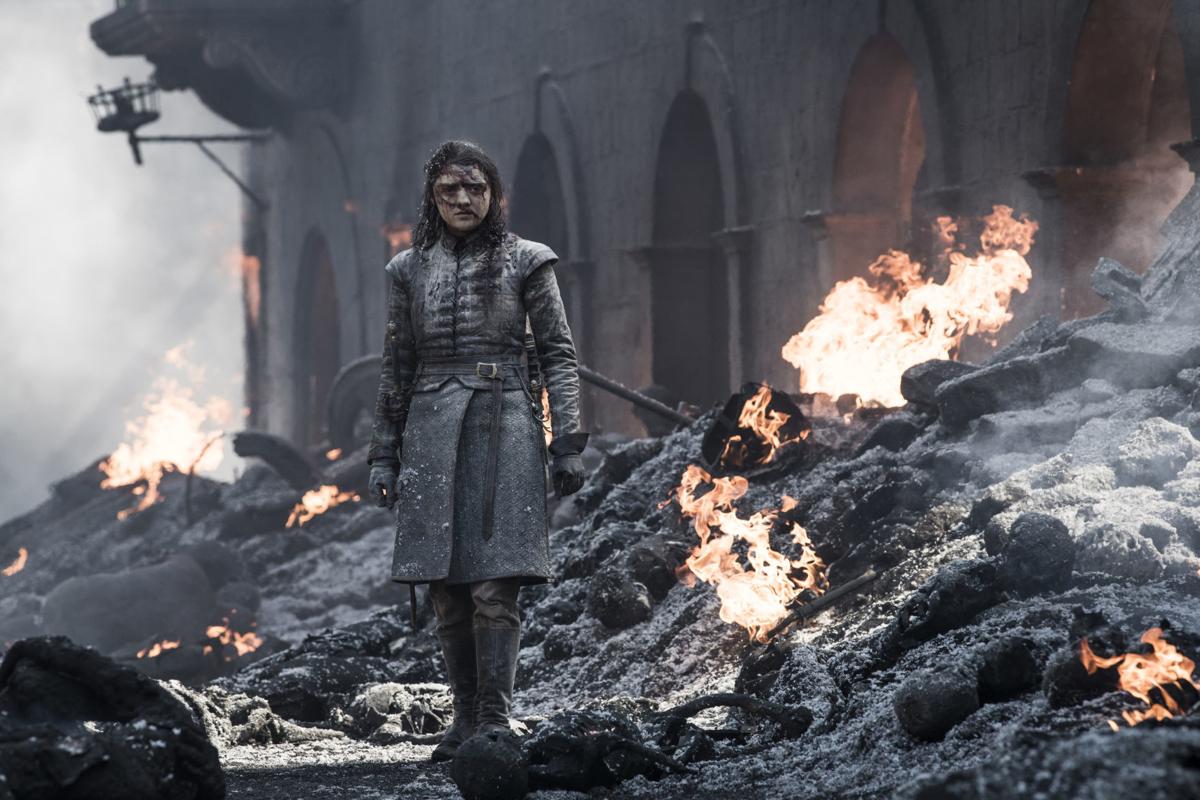 Maisie Williams as Arya Stark during the final season of the HBO series "Game of Thrones." The show was part of several key moments that changed the entertainment business significantly in the 2010s.

The entertainment business has been in a perennial state of change pretty much since the Lumiere Bros. first showed their short films in 19th-century Paris.

But few periods have brought the degree of upheaval as this past decade. The collision of new technology, a massive creative boom, major corporate reorganizations and shifting consumer preferences - not to mention a social revolution - has ensured that the more things change in Hollywood, the more they go completely topsy-turvy.

Many publications (including this one) have taken this time to look back insightfully at the best movies, shows and albums of the 2010s.

But as the decade comes to a close, here's a different spin - a countdown, in descending order, of the 12 most influential moments in the U.S. entertainment business over the past 10 years.

The seismic shifts that are now a part of our media reality happened because of specific decisions, events and moments. Often we never saw them coming. But once they arrived, we knew we'd never view the world the same way again.

Arguably no personality has shaped the current media landscape like Rupert Murdoch, whether it was with Fox News, the Fox Network or kingmaking newspapers all over the world. With the decision to sell his massive film and television studio business two years ago this month, he telegraphed that he didn't want to continue being in the A-list content-creation business anymore; when it came to scripted entertainment, at least, he was mainly happy to distribute the content of others. Thus ended a momentous era for Murdoch - not to mention a century-old studio behind some of the most iconic films ever made.

Not that long ago the notion of music as a product we'd consume mainly by subscription seemed a little strange. Album sales, that's where the money lay, with stores and sites pushing the latest collection from our favorite artists. Or with song downloads a la iTunes. But the Swedes of Spotify showed a different way - a subscription way. They weren't first, but they were the most formidable. When the company hit this threshold eight years ago this month, we knew they were here to stay. Apple and other competitors would soon ratchet up their efforts, and the way artists sold music - the way we listened to music - changed forever.

You probably don't even remember "John Carter." And that's exactly the point. When this decade began, the biggest hit in theaters was also one of the biggest hits in history - "Avatar," which would go on to take in $2.74 billion worldwide. It did that by making use of 3-D technology, which looked for all the world like it would change the film game. After all, it literally changed how we saw movies. But the years that followed would soon demonstrate that the form was more novelty than reality. Studios didn't want to produce it, audiences didn't want to see it and no one wanted to pay extra for it. A seminal moment in that swift decline? The failure of "John Carter," a 3-D science-fiction spectacle that cost Disney more than $300 million to make and promptly opened in the U.S. to ... $30 million. The company took a $200 million writedown on the film and fired its then-studio chief, Rich Ross. And now finding a big 3-D blockbuster is as rare as coming upon a mine of unobtainium.

The videogame industry has seen some massive hits over the years. But few came in the form of Fortnite Battle Royale. The Epic Games creation, which sees players fight for survival using novel items on a contained island, combined networked game-play, intricate worlds, humor, action and high skill levels in ways that had rarely been attempted before. But maybe most important, it perfected a very modern model: A free-to-play game that makes much of its revenue via in-world microtransactions. Last year Epic generated $2.4 billion in revenue from its Fortnite properties as it showed a new way to run a gaming empire. If that wasn't enough, the brand has fed a culture of esports and gamer-streaming sites, in the process creating an entirely new celebrity and economic system.

A large telco and a giant content company coming together seemed like a good idea on paper. But could it pass legal muster? Courts, after all, have not always looked favorably on such vertical integration. That was the stumbling block to the creation of WarnerMedia, which aimed to combine the reach of a phone company with the content-well of a media giant. The Department of Justice argued that this would give one firm too much power. A federal court said otherwise, ruling that the $85 billion merger didn't pose antitrust concerns. The ruling not only opened the door to the creation of a new megalith - it cleared the way for other media mergers, including Disney-Fox, the reuniting of Viacom and CBS and likely others still to come.

If one wanted to capture the decline of network television - essentially the dismantling of an entire platform that once regularly gathered large numbers of Americans for a shared experience - over this past decade there are no shortage of places to look. The five major English-language networks suffered drops through much of the 2010s, as audiences in this era of prolific programming became fragmented and went digital. But a look at where some of the longest-running network hits finished last May demonstrates just how steep the declines have been. "Grey's Anatomy," "NCIS" and "American Idol," which were all going strong in 2009, each finished 2019 with at least 20 percent fewer viewers than they began the decade. ("Idol" finished down some 200 percent.) And those are the hits. Sure there are bright spots, like NBC's "Sunday Night Football." But most programs aren't so lucky. Telling metric: the most-watched non-sports show last season ("The Big Bang Theory") garnered an average of 18 million viewers. The most-watched non-sports show in 2009-2010 ("Idol"): An average of 23 million viewers. Oh, and "Big Bang" is now off the air.

Superhero movies have been around for decades. But Joss Whedon's "The Avengers" changed everything when it was released in 2012. With it came not just a massive hit but the idea of the shared film universe - the zeitgeisty concept that suggests franchises don't just continue as linear sequels but via overlapping characters across a sprawling set of movies (the Marvel Cinematic Universe, in this case). The idea was gamechanging because it not only allowed for cross-promotion between numerous movies but for a studio to develop and produce several installments in a franchise simultaneously. That has regularly yielded multiple films the same year - and made fans, Wall street and shareholders very happy. Just ask Disney: MCU films have grossed $22.6 billion worldwide.

Sure, "The Sopranos" and "Sex and the City" finales had given us some memorable communal moments. But before "Game of Thrones," the idea that so many people could come together over television that didn't air on a traditional broadcast network was pretty rare. And that such TV could be fueled by a fever on social media really hadn't been contemplated. Then "GOT's" Red Wedding episode happened. Robb Stark and his men were killed, Twitter and Facebook blew up, and the idea of social-media as a place where we gather to express shock, amazement and anger about entertainment solidified - indeed, the very way audiences consume television changed. Unfortunately for HBO and "GOT," they reaped what they sowed - viewers knew exactly where to go to get mad about the show's finale in 2019.

Yes, it happened at the same moment as No. 12. But the significance looks very different from the other side. As an entertainment giant, Disney was already well-positioned to take on Silicon Valley giants like Netflix. But with Bob Iger's announcement that the company would spend $52.4 billion (later $71.3 billion) to buy key Fox assets meant a new frontier. Disney, which had previously beefed up with purchases of Pixar, Marvel and Lucasfilm, was now in full super-size mode. The move would set the table for streaming-service Disney Plus, and make the idea that one giant company could produce so many of fan favorites either a thrilling or scary reality.

The Academy of Motion Pictures Arts & Sciences has struggled with diversity challenges for many years. But when all 20 of the acting nominees were white in 2015, and then again in 2016, the tide turned. A movement led by activist April Reign and anchored by a potent hashtag was founded; high-profile celebrities threatened a boycott; and change, finally, was enacted. The academy amended its new-member process and began admitting far more people of color, with a goal of doubling its diversity by 2020.

In the past two years the group has welcomed nearly 2,000 new members, with people of color comprising a significant percentage of them. While the rate of progress remains decidedly slow, the shifts among members and Hollywood generally are noticeable. At the 2019 Oscars, people of color populated many of the acting and other categories, while "Black Panther" became a force. Signs have begun to emerge that an industry long beset by institutional bias is finally opening itself up to a new and more diverse era.

Revolutions have underlying causes and they have immediate ones - every 10th-grade history student knows that. But it's rare to see the shot fired right before our eyes. When the New York Times and New Yorker ran stories, within just a few days of each other, detailing a decades-long pattern of alleged sexual abuse and assault by film mogul Harvey Weinstein, it changed everything. Other high-profile people in media and entertainment would come to be accused and fired - Matt Lauer, Leslie Moonves and Kevin Spacey, to name just a few. A new accountability had arisen; a new consciousness was formed. And the #MeToo and #TimesUp movements were born. Everyone agrees the house-cleaning was exactly what the entertainment business needed. But many say reform has moved, and continues to move, too slowly, with fundamental hierarchies left intact.

Go through the concepts that define the current entertainment climate. Streaming Wars. Binging. Peak TV. Cord-cutting. Pretty much all of them can trace their roots to one moment: when Netflix, with a little-known playwright and screenwriter named Beau Willimon, took a flyer on a different kind of series. When it launched "House of Cards" that winter's day - dropping the whole season's episodes at once - it didn't just unveil a political soap opera. It didn't just transform what had been basically a digital library-service into an original-content powerhouse. It changed how we watch television, where we watch television, what we expect from television and how every other rival might produce and release television. Frank Underwood's camera-address was the turn that launched a thousand streams. And it changed the business of entertainment forever.