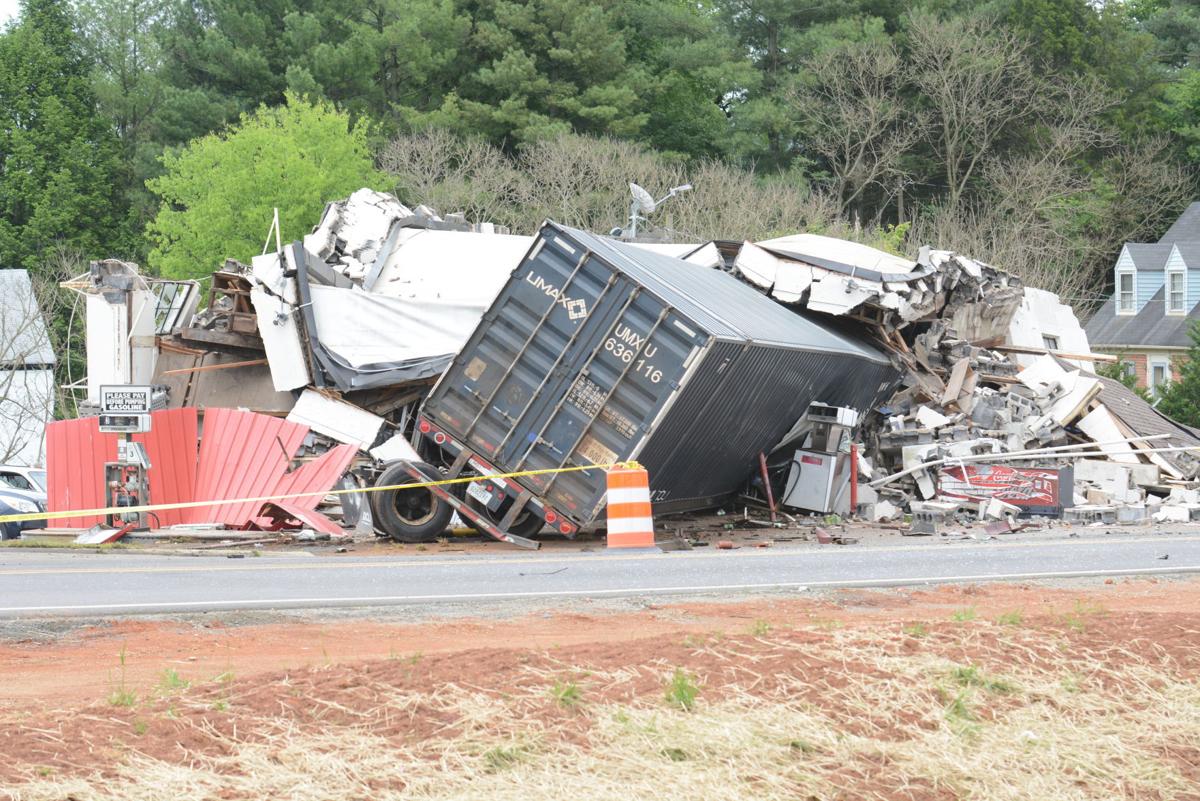 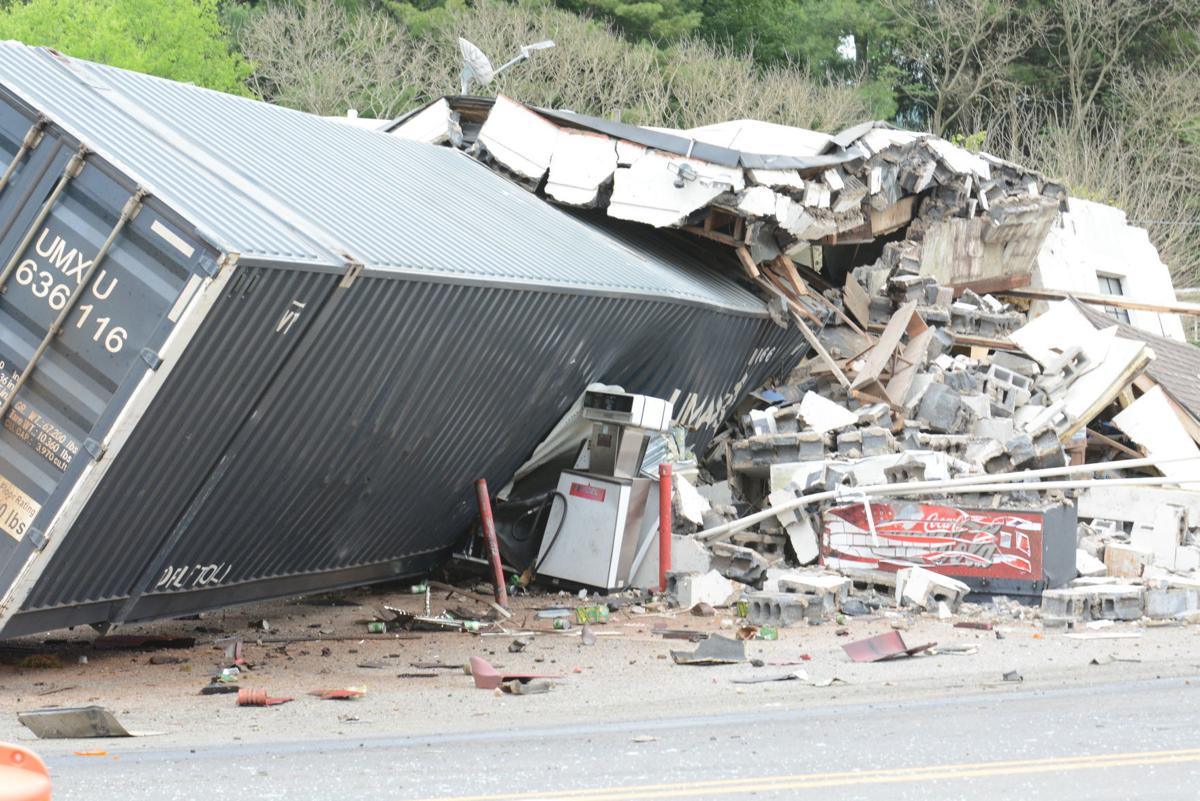 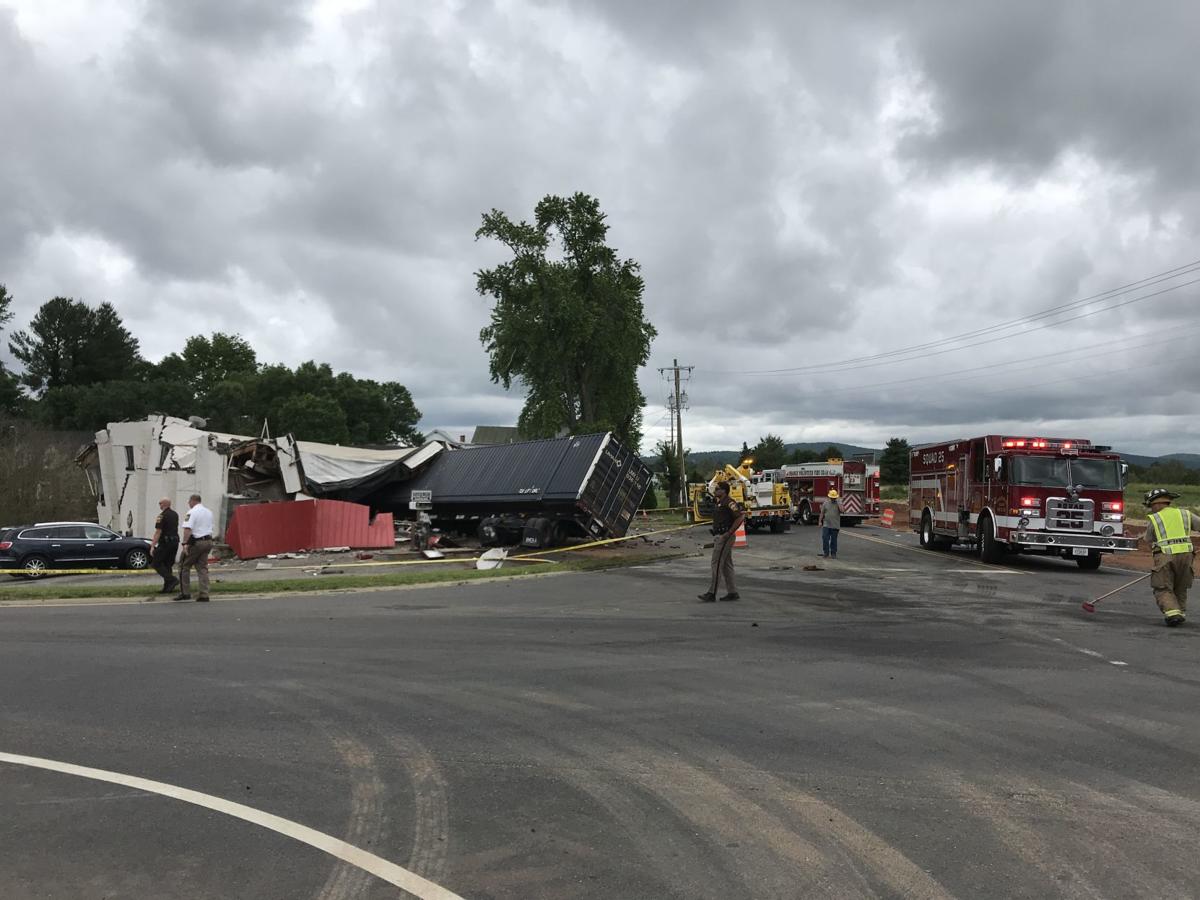 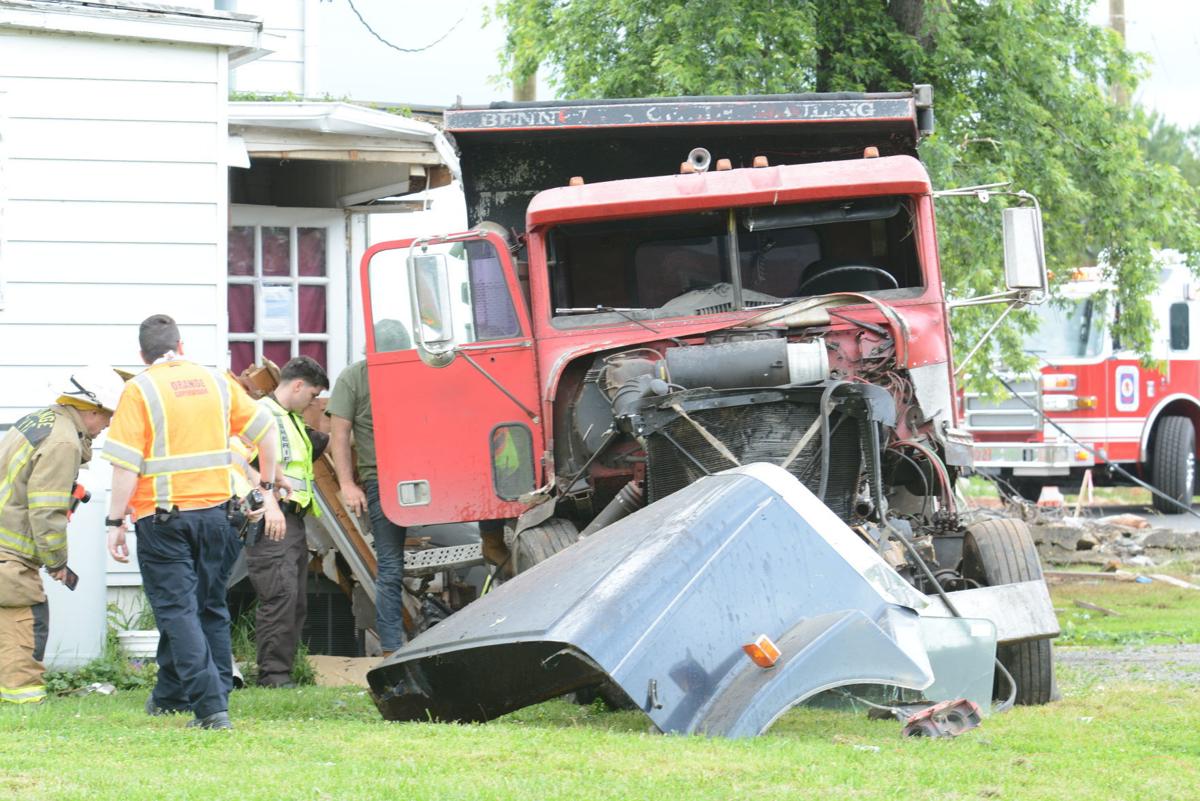 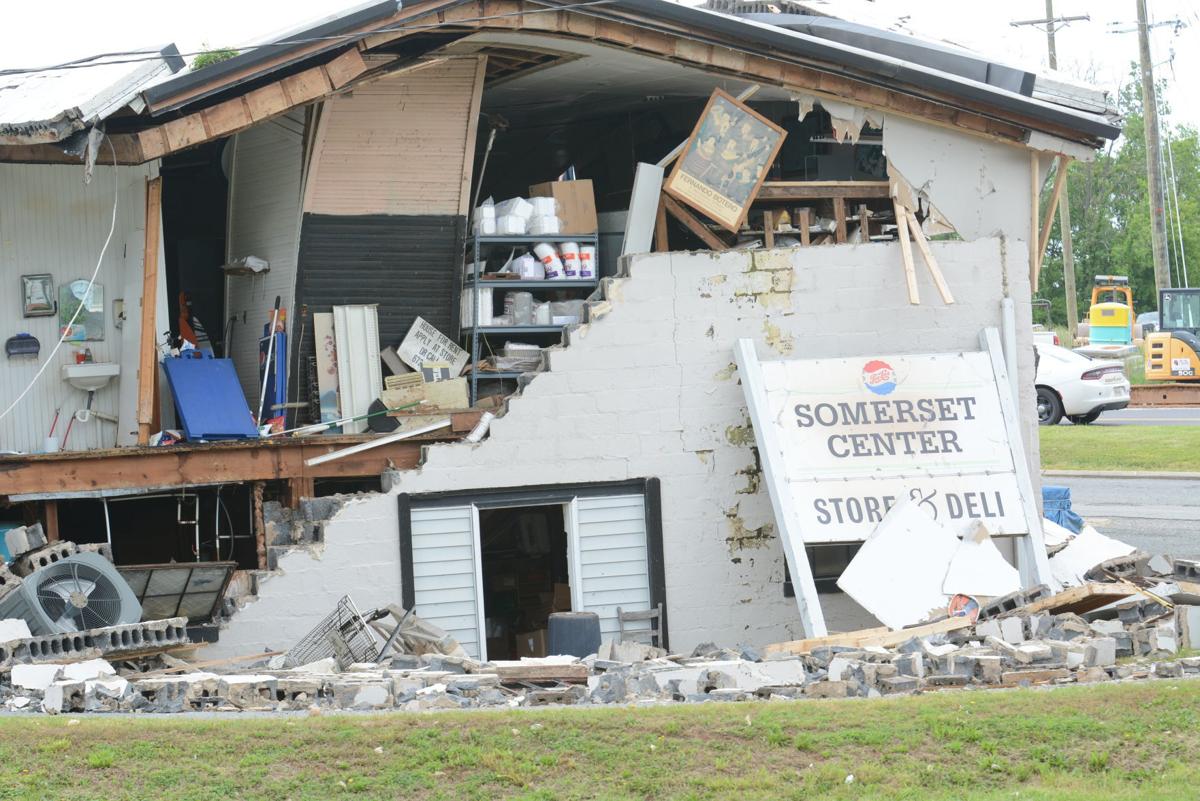 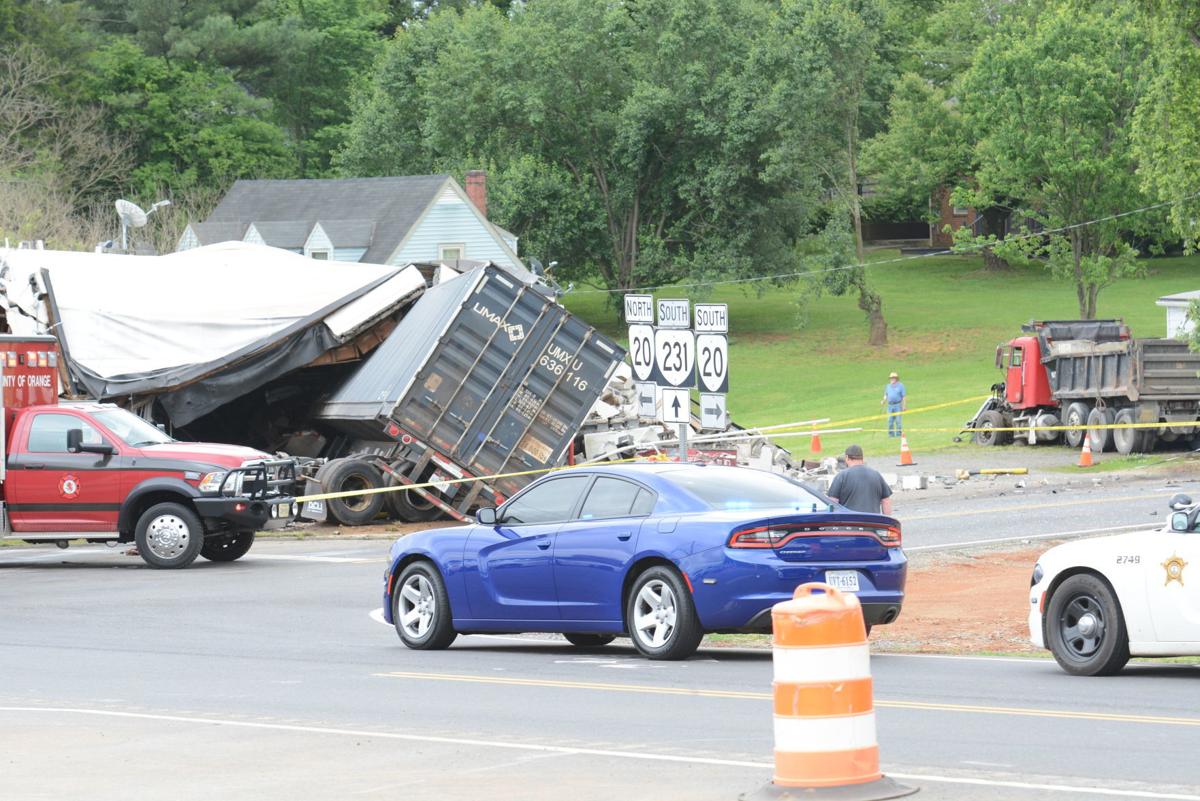 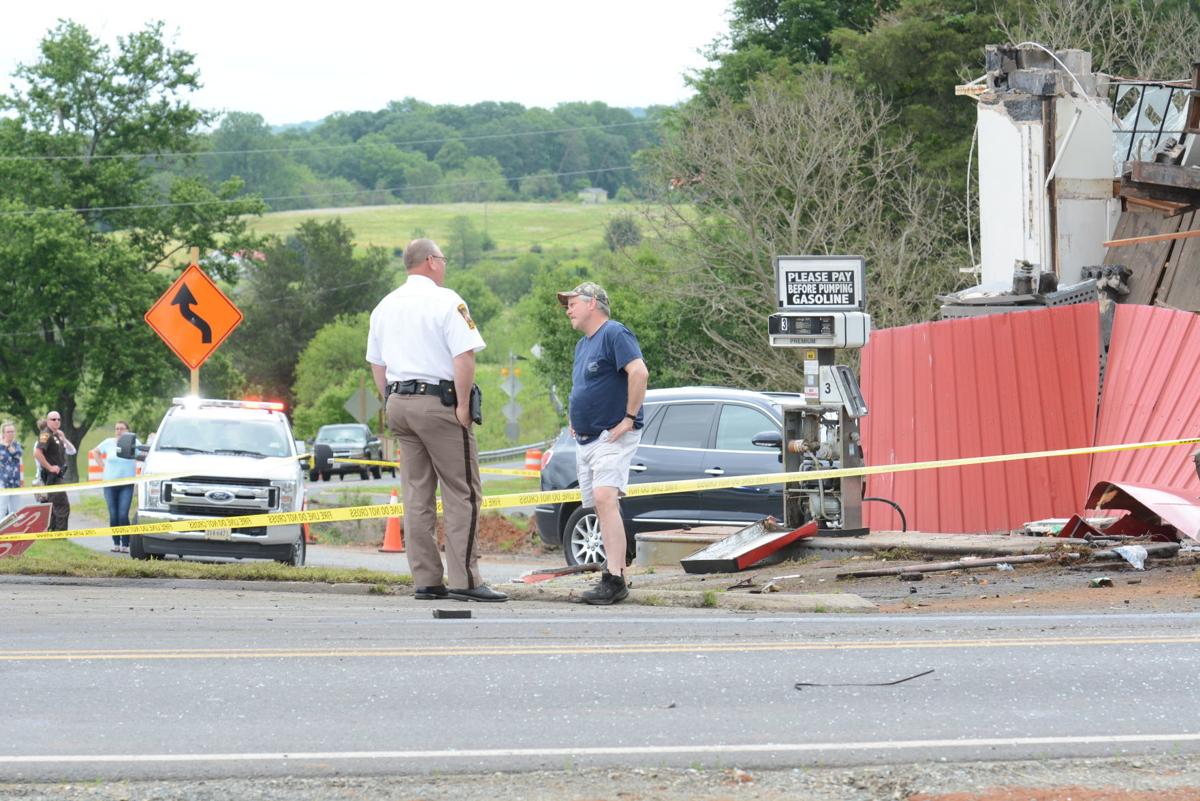 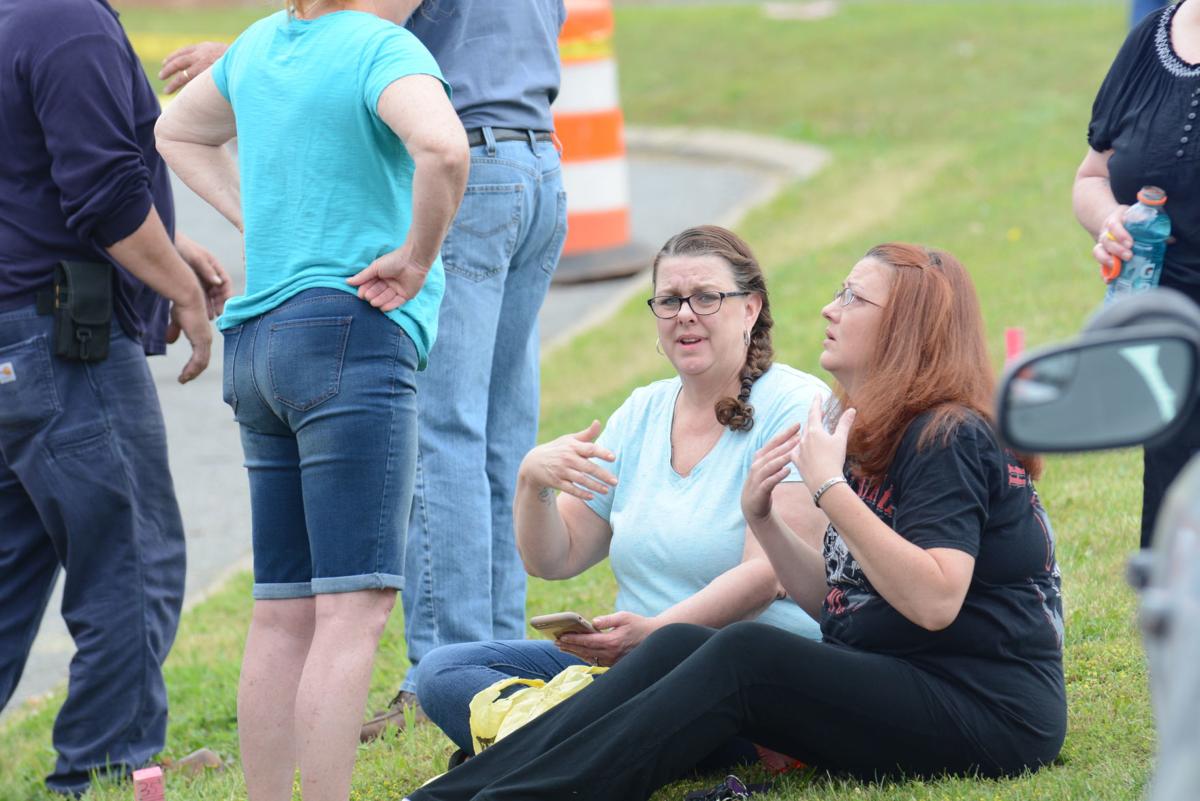 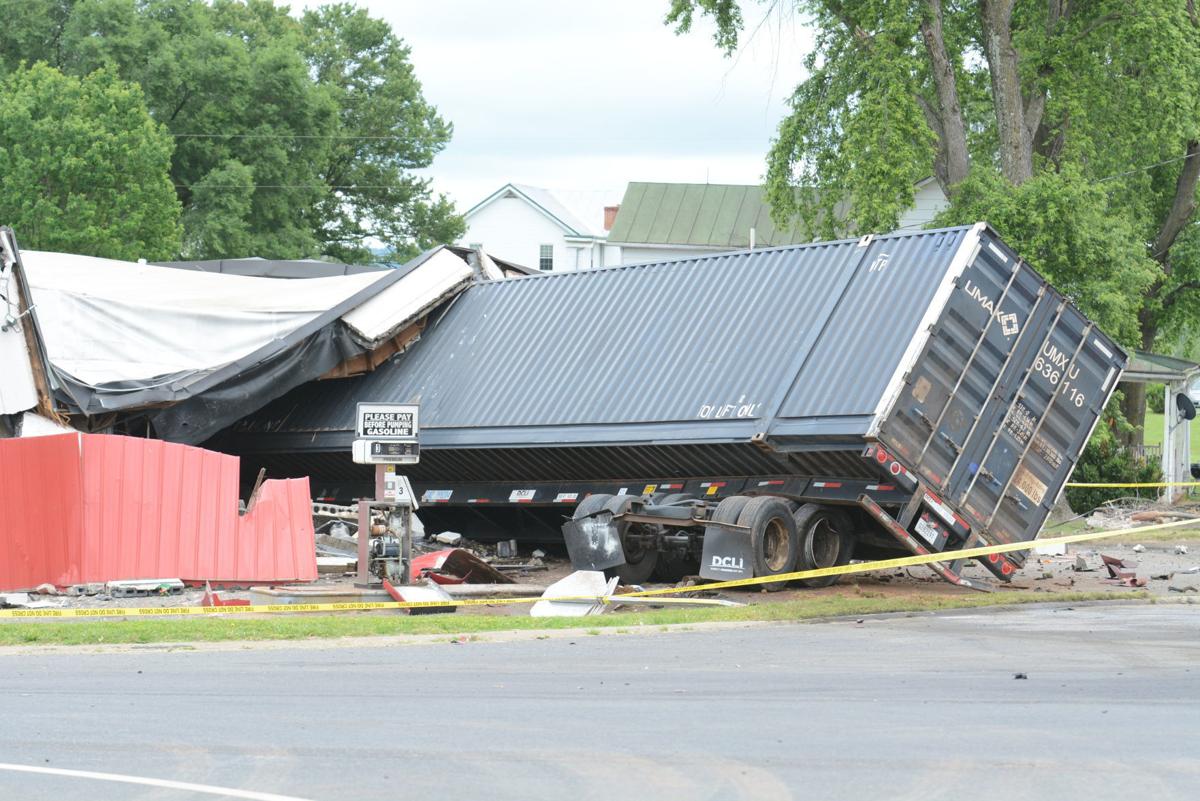 A tractor-trailer collided with a dump truck on Rt. 231 in Orange, then plowed into a convenience store on the corner of Rt. 20. 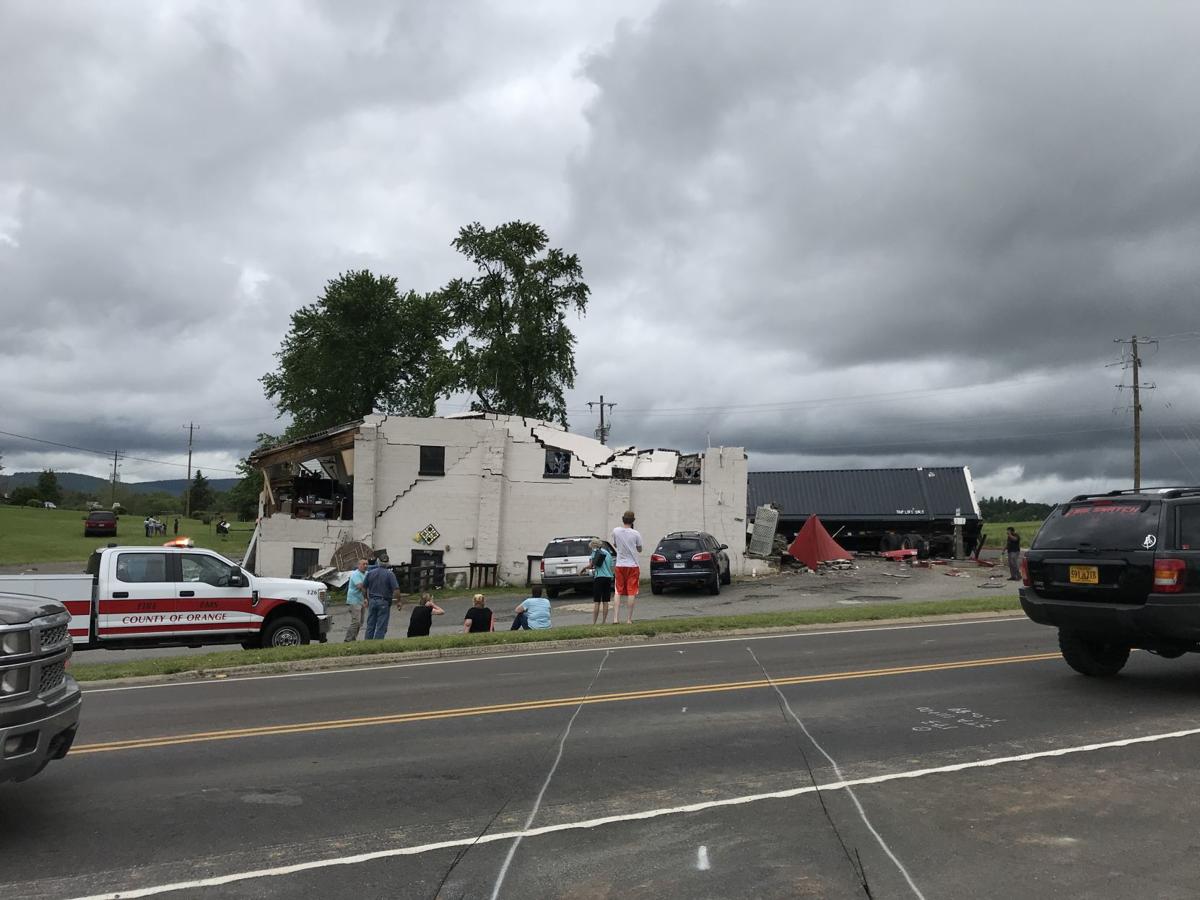 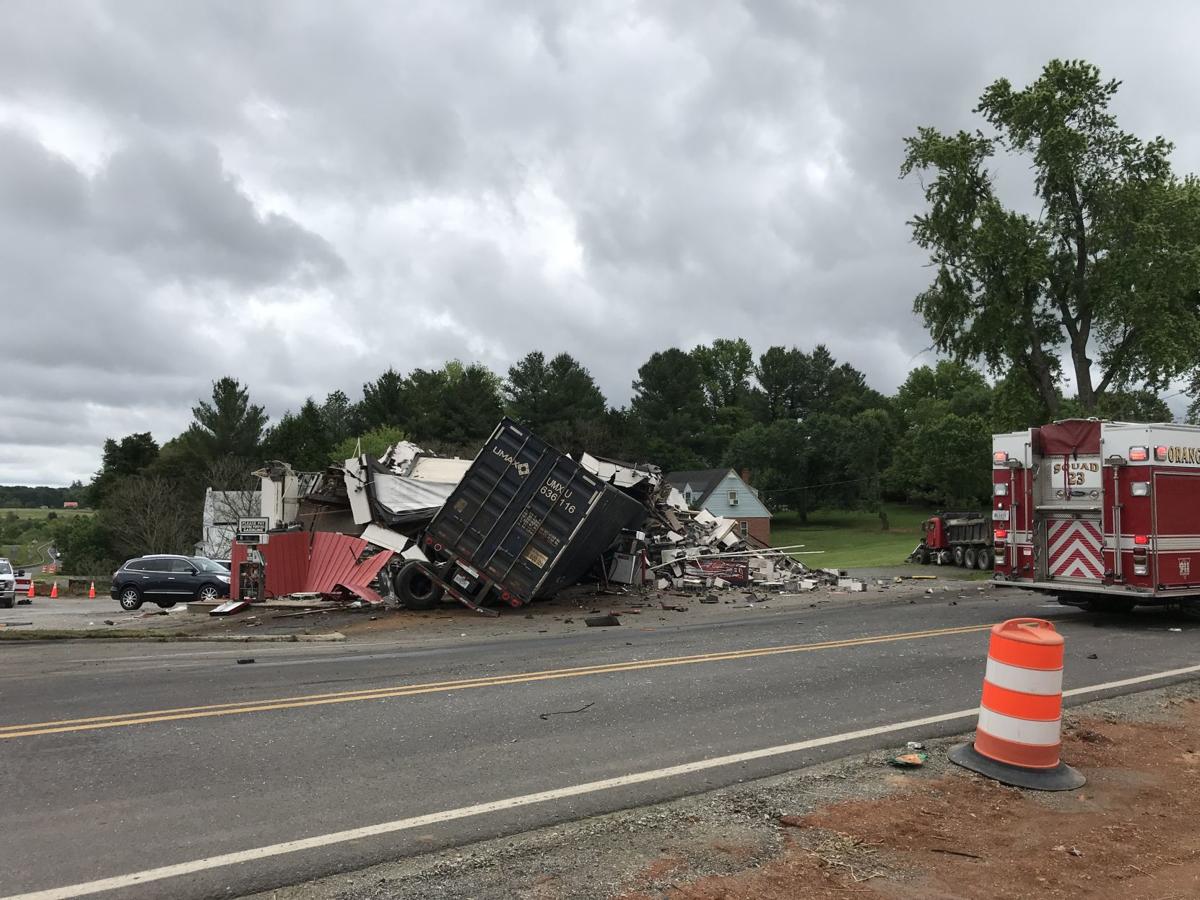 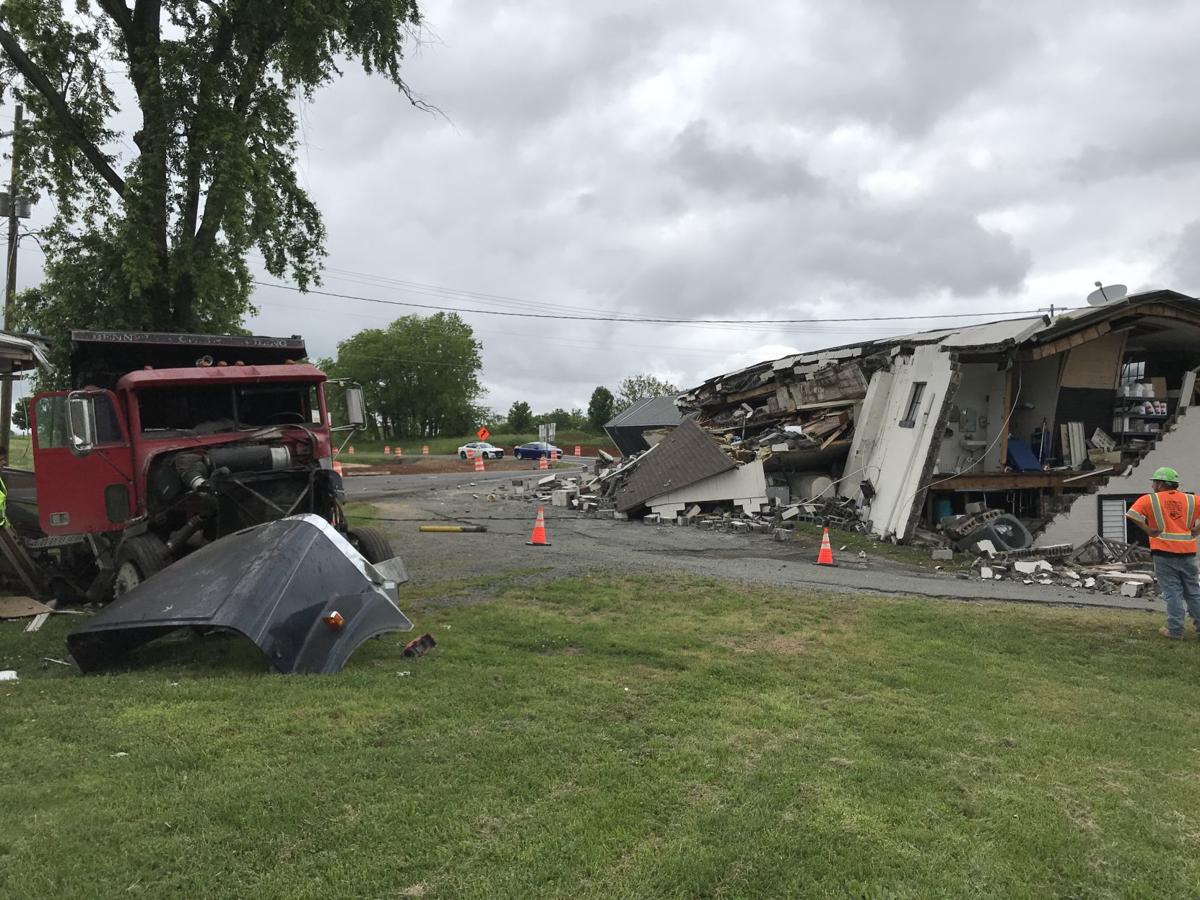 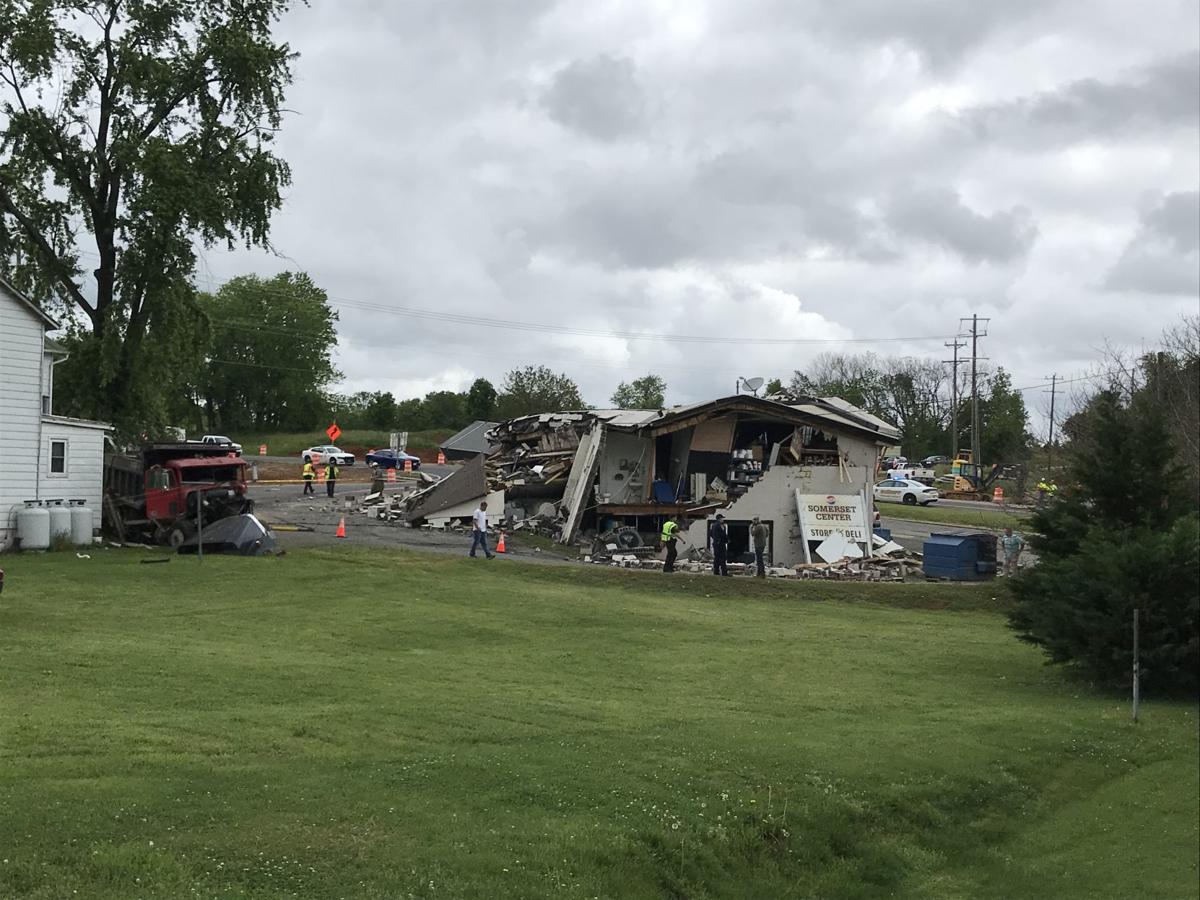 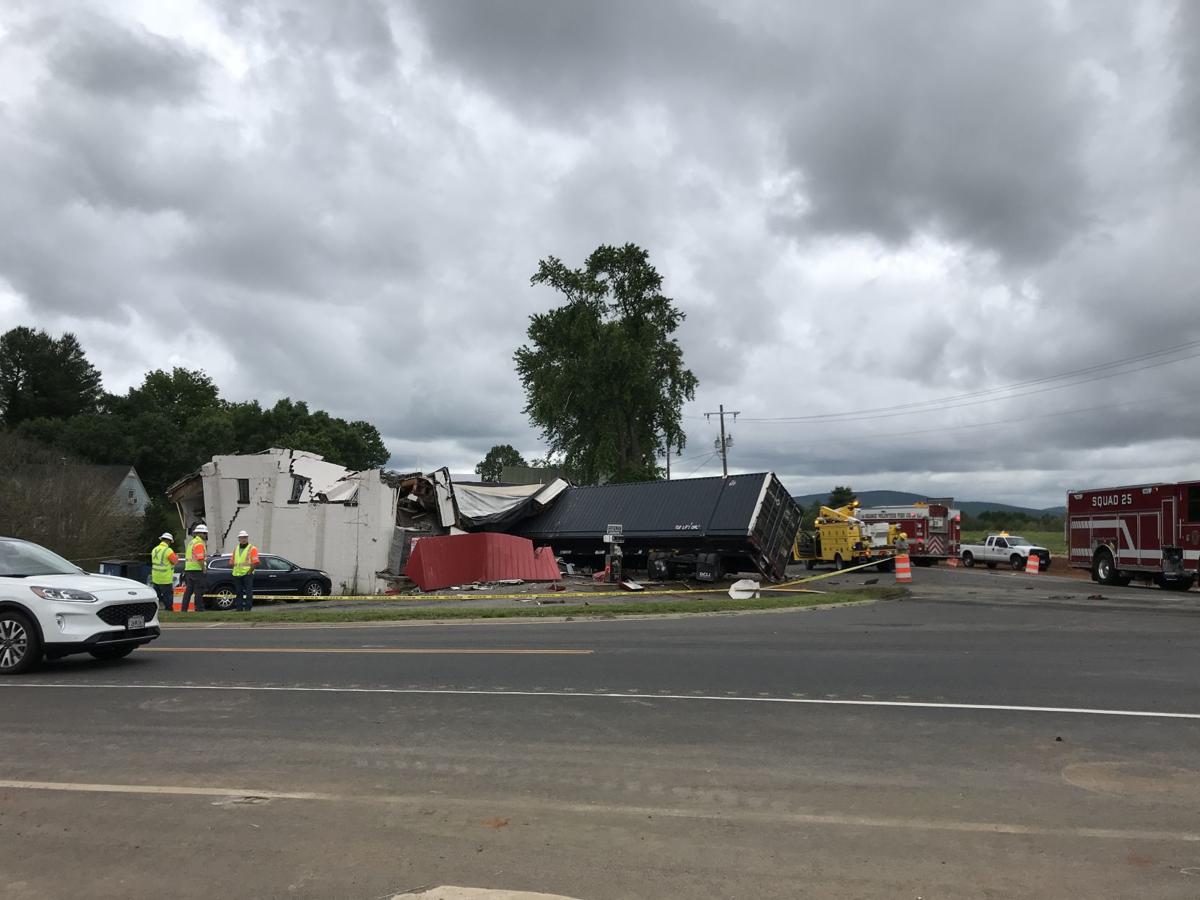 A tractor-trailer collided with a dump truck on Rt. 231 in Orange, then plowed into a convenience store on the corner of Rt. 20.

“We all said it would happen one day.”

Renee McElheney sat on the ground outside the Somerset Center Store unhurt after a tractor-trailer plowed into the front of the store Wednesday morning.

According to eyewitnesses working on the traffic circle project at the dangerous Route 231 and Route 20 intersection, a tractor-trailer heading southbound on Route 231 and a dump truck heading toward Orange collided in front of the store. The tractor-trailer plowed through the gas pumps in front of the community convenience store while the dump truck missed the store, striking a tree next to a nearby house.

No one seemed seriously injured at the scene, which was swarming with fire and rescue units, law enforcement officers and anxious onlookers.

As motorists were waved through the intersection by Orange County Sheriff’s deputies, many had their phones out taking photos or videos of the crumbled cinderblock structure and the tail end of the large truck emerging from it. Onlookers congregated on nearby lawns and Blue Run Baptist Church doubled not only as a turn-around point for northbound Route 231 traffic, but also as a parking spot for those hoping to get a closer look. Construction work on the traffic circle stopped as most of those standing around shook their head in amazement no one was seriously injured.

A smell of gasoline floated through the air as firefighters worked to secure the scene and keep onlookers away from the building and the danger of vehicles leaking fuel.

While the tractor-trailer struck the front of the store, much of the back of the building was exposed from the force of the blow. The small bathroom at the rear of the store was missing its exterior wall and cinderblocks were scattered around the base of the building.

Those who didn’t know what the store once looked like could hardly tell what it once had been.

Sarah Aguilar, normally up front in the store and behind the counter, was back by the trademark picnic table when the truck came barreling through the storefront.

“Thank God I was. Otherwise, I wouldn’t be here talking to you,” she said. “I felt it. I didn’t see it.” Aguilar said she and McElheney, who was sitting at a nearby desk to be closer to the air conditioner, were unhurt and able to escape the building by going down the back stairs and out the basement door.

“I’m just glad we didn’t have any customers in the store,” McElheney added. “We were lucky we were the only ones in the store. I guess they’ll have to tear it down.”

Roy Perry of Rapidan, working with Chemung Contracting crew on the Virginia Department of Transportation traffic circle project aimed to improve traffic flow and reduce accidents, said he and co-worker Randy Smith saw and heard the wreck and ran over to see if they could help.

Perry said they saw the driver of the tractor-trailer crawl out from under the rubble.

“When we got close, we smelled gas and took a step back. We were worried about the women who work in there, but we saw they had crawled out the back,” he said.

“My first thought was those two women would be hurt, but the good Lord was there today,” Smith added.

“We thought for sure there would be some major injuries,” Perry said.

At the house behind the Center Store, Brandon Garcia-Mendez said many of his family were inside when the dump truck struck the tree beside the house. “They felt the house shake,” he said, translating for his family members. “My sister said she was afraid the house was going to fall in on them.”

Pastor Robert Anthony, of nearby Blue Run Baptist Church, Barboursville, and the Barboursville Volunteer Fire Company noted, “If not for that tree there, that dump truck would’ve gone through that house.”

The $1.8 million traffic circle project, which began in March, is expected to be completed by December. In late March, the speed limit in the construction zone had been reduced to 35 mph. More than two dozen crashes had been reported at the intersection between 2010 and 2015.

A 2013 Peterbilt tractor-trailer was westbound on State Route 231 when it failed to stop at a stop sign and collided with a northbound 1994 Freightliner dump truck, the Virginia State Police said late Wednesday.

The tractor-trailer’s driver, Gabriel J. Garcia, 29, of Womelsdorf, Pa., was uninjured in the crash. He was wearing a seat belt.

The dump truck’s driver, Brent M. Spitzer, 54, of Gordonsville, suffered minor injuries. Spitzer, who was wearing a seat belt, was taken to UVA Medical Center in Charlottesville for treatment.

The crash remains under investigation.

McElheney said there was a bad accident in front of the store just last week.

“I was almost in tears when I got here,” Scuffletown Road dairy farmer Justin Rhodes said. “The Center Store is a landmark. I was over on the farm when I heard the sirens and I came over. Sarah has been like a second mother to me. I eat here almost every day and it seems like there’s a bad accident here every few weeks.”