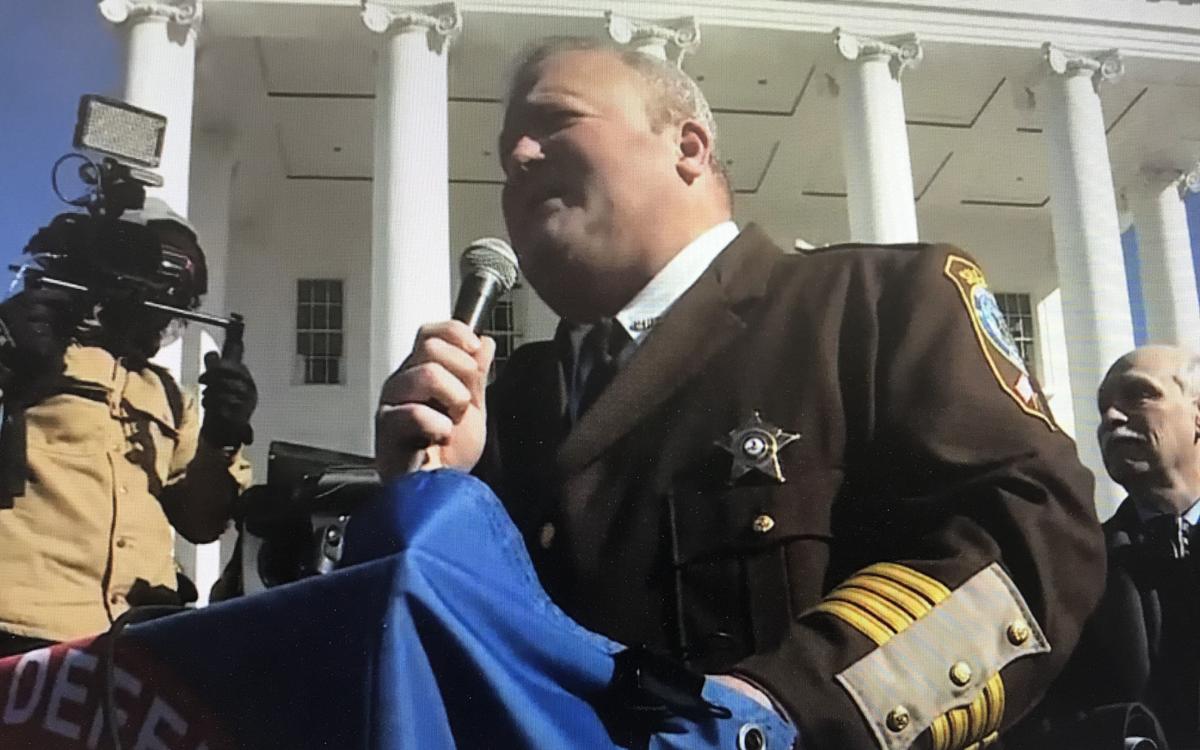 Culpeper County Sheriff Scott Jenkins speaks at Monday's gun rally on the steps of the state capitol in Richmond. 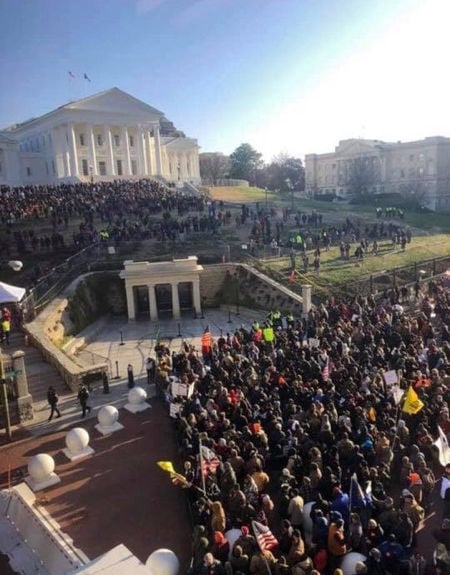 View of the state capitol for Monday's gun rally. 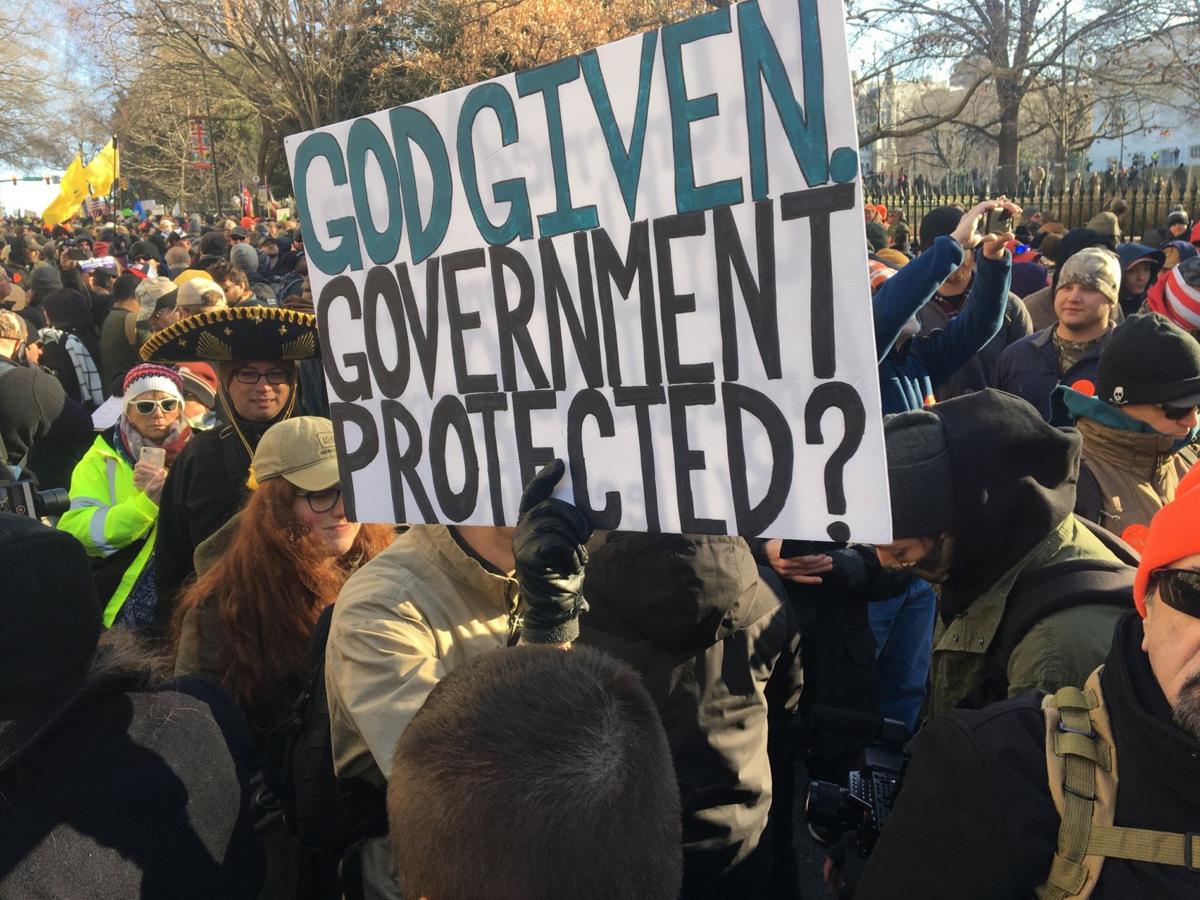 A scene from Monday's gun rally in Richmond 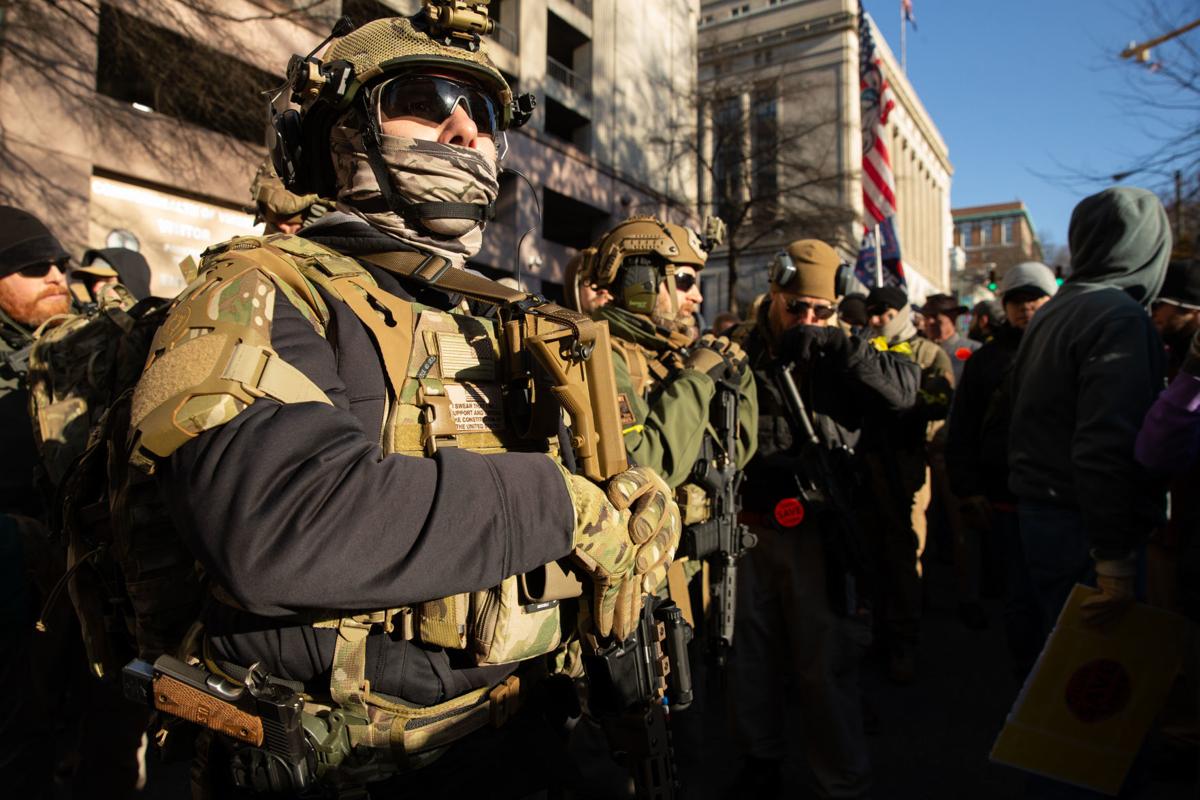 Gun-rights advocates rally at the Virginia State Capitol. The rally was hosted by the Virginia Citizens Defense League.

Culpeper County Sheriff Scott Jenkins speaks at Monday's gun rally on the steps of the state capitol in Richmond.

View of the state capitol for Monday's gun rally.

A scene from Monday's gun rally in Richmond

Gun-rights advocates rally at the Virginia State Capitol. The rally was hosted by the Virginia Citizens Defense League.

There were no arrests and no violence in spite of earlier fears that the rally would draw white supremacists and other violent protesters as was seen at the deadly 2017 Unite the Right rally in Charlottesville.

Culpeper County Sheriff Scott Jenkins was among the speakers at the day’s event in Richmond sponsored by the Virginia Citizens Defense League. He spoke from the capitol steps, doubling down on his earlier vow to deputize thousands of Culpeper County residents, if need be, to allow them to keep their guns in the face of Democratic legislation.

Stepping to the podium, Jenkins accused state Democrats of overreach on the Second Amendment, claiming, “They’ve been bought and paid for and their minds are made up.”

The local sheriff said he knows full well the authority vested in him as an elected constitutional officer.

“It is our determination how we will choose to enforce the laws in our jurisdiction and it’s those constitutional offices … in each of your counties that can be the final line that says no encroachment on your Second Amendment rights. We will not have our citizens disarmed,” Jenkins said. “That line is very clear …. We cannot allow the Second Amendment to be further violated.”

He encouraged those in attendance to return home and ask their elected officials “exactly where is the line that they will not cross.”

In the streets of downtown Richmond, outside the capitol building, activists openly carried guns, some making deliberate displays of their military style rifles, according to multiple press reports and live footage. Gov. Ralph Northam declared a temporary state of emergency days ahead of the rally, banning all weapons from the event on Capitol Square, fenced off and with high security for the rally.

“The feeling is upbeat. A lot of chants against the governor,” he said in a morning message to the Star-Exponent. “It’s great to see all of these supporters of the Second Amendment. It’s a rare occasion as most gun owners keep to themselves. The governor and General Assembly have woken a sleeping giant.”

Russell declined to say whether he was armed at the rally. He predicted the event would have an impact in the voting booth either this session or next year.

“People are fired up and any further push by progressives in the General Assembly will seal their political fate,” Russell said.

Also seen at the rally were signs showing a reproduction of Northam’s racist yearbook photo of a Ku Klux Klan member and someone in black face with the message, “The man behind the sheet wants your guns.” VCDL members posted such signs in a historically African-American neighborhood in the town of Culpeper in the weeks leading up to the rally.

Others at the rally, livestreamed by various online sources, carried signs, including Old Glory, Trump 2020 and the “Don’t Tread on Me” Culpeper Minutemen flag. Many wore hunting camouflage and orange, “Guns Save Lives” stickers while others donned body armor. Audible chants could be heard along with unified shouts, songs and the sound of bagpipe. A street vendor shouted out to passersby, “Don’t be a Democrat, get yourself a Trump hat.”

The protesters were mostly white and male, according to the Associated Press, coming out in strong numbers Monday despite to the chilly temperature to send a message to legislators. Many came from out of state and from around Virginia. Russell overheard a lot of conversations from people hailing from Texas, Florida, Oklahoma and Illinois.

The Virginia State Police, the Virginia Capitol Police and the Richmond Police had a strong presence. Police limited access to Capitol Square to only one entrance and required those who entered to go through a security screening.

“The government doesn’t run us, we run the government,” Kem Regik, a 20-year-old private security officer from Northern Virginia who brought a white flag with a picture of a rifle captioned, told the Associated Press, “Come and take it.”

“It has been rumored that certain hate groups may try to show up and hijack the 2A rally on Monday. This rally is for those of us who want to defend 2A rights for EVERY law abiding citizen. Those who peddle in hate and racial supremacy will find no support or aid from us,” Freitas posted. “We defend everyone’s right to defend themselves and will not allow these groups to pervert that message under any circumstance. So if you are a member of a hate group ... do us all a favor and crawl back to your parents basement. You are a threat to our citizens and our liberties and we don’t want you in our beloved Commonwealth.”

Freitas was also among the day’s speakers on the capitol steps.