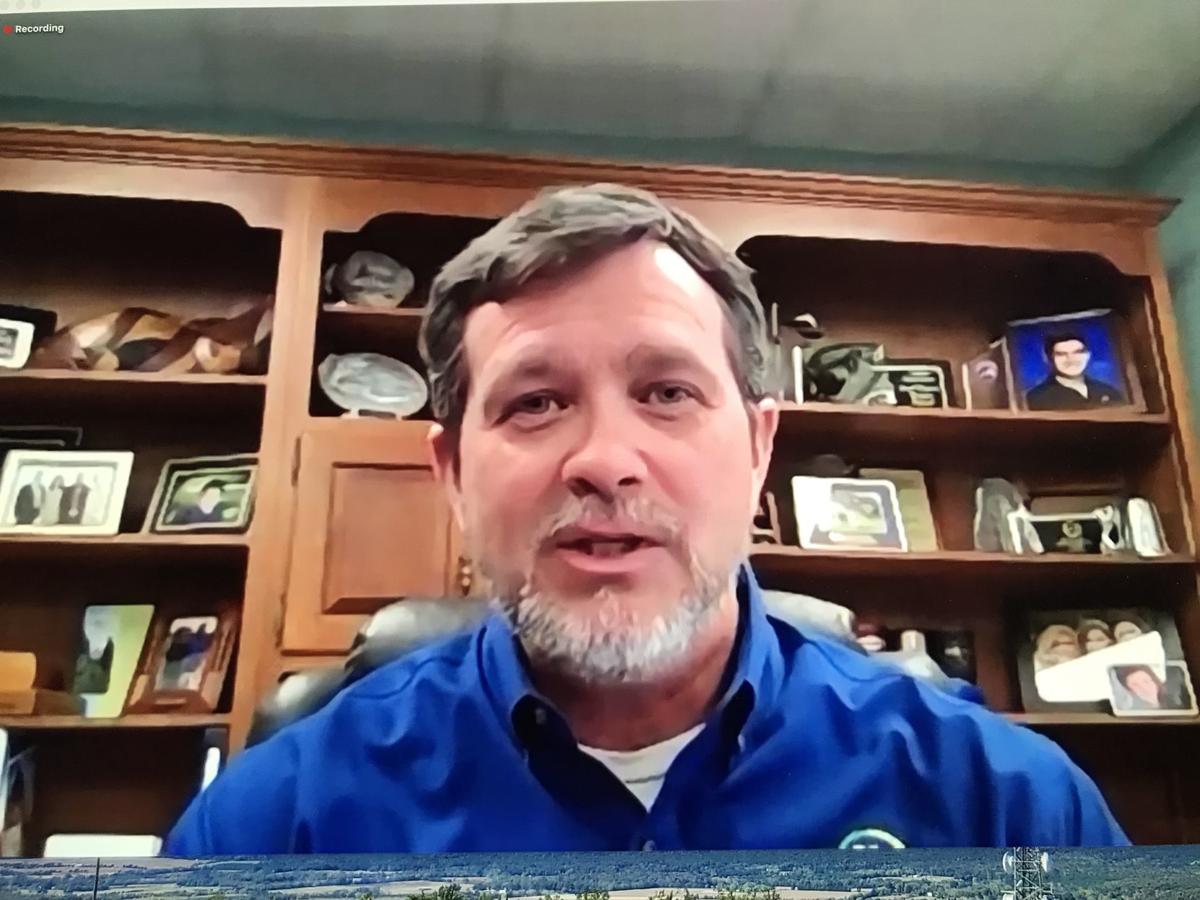 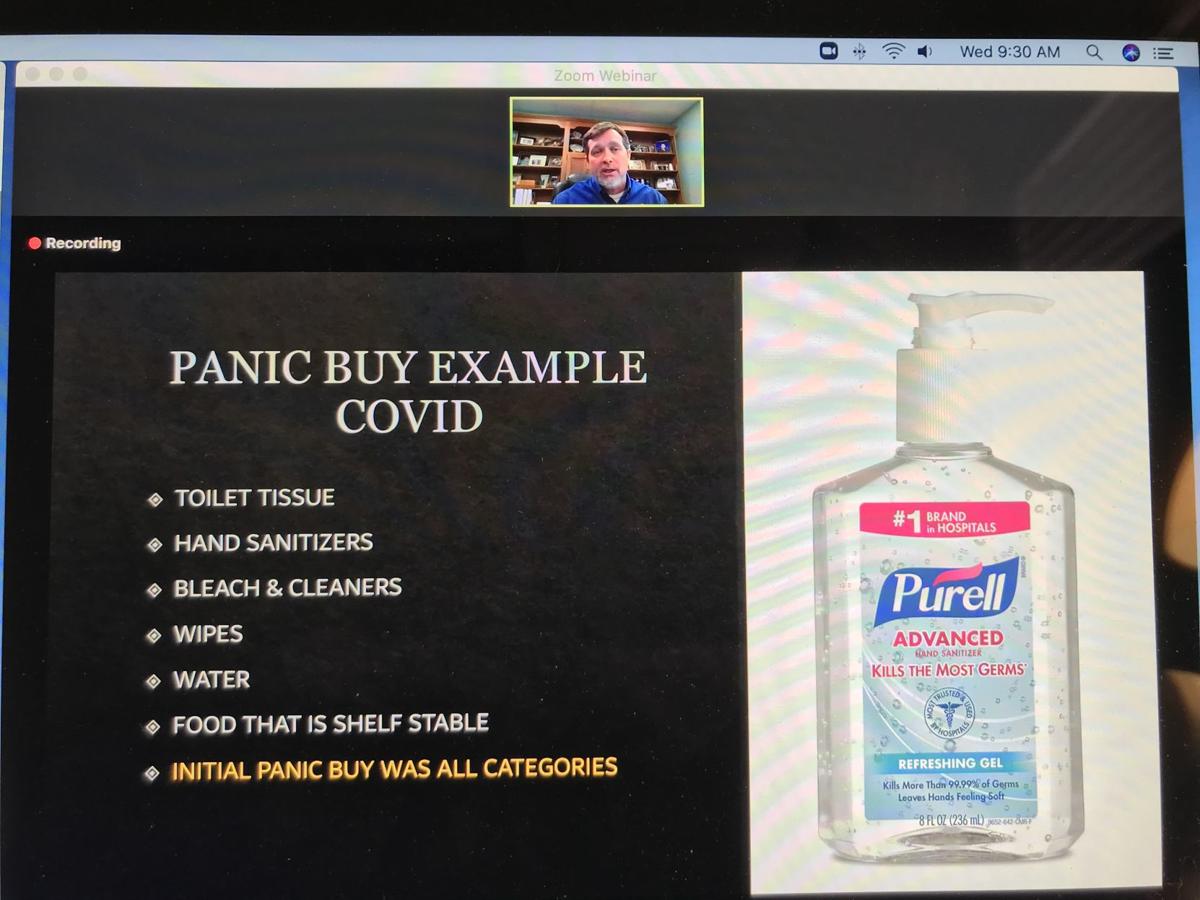 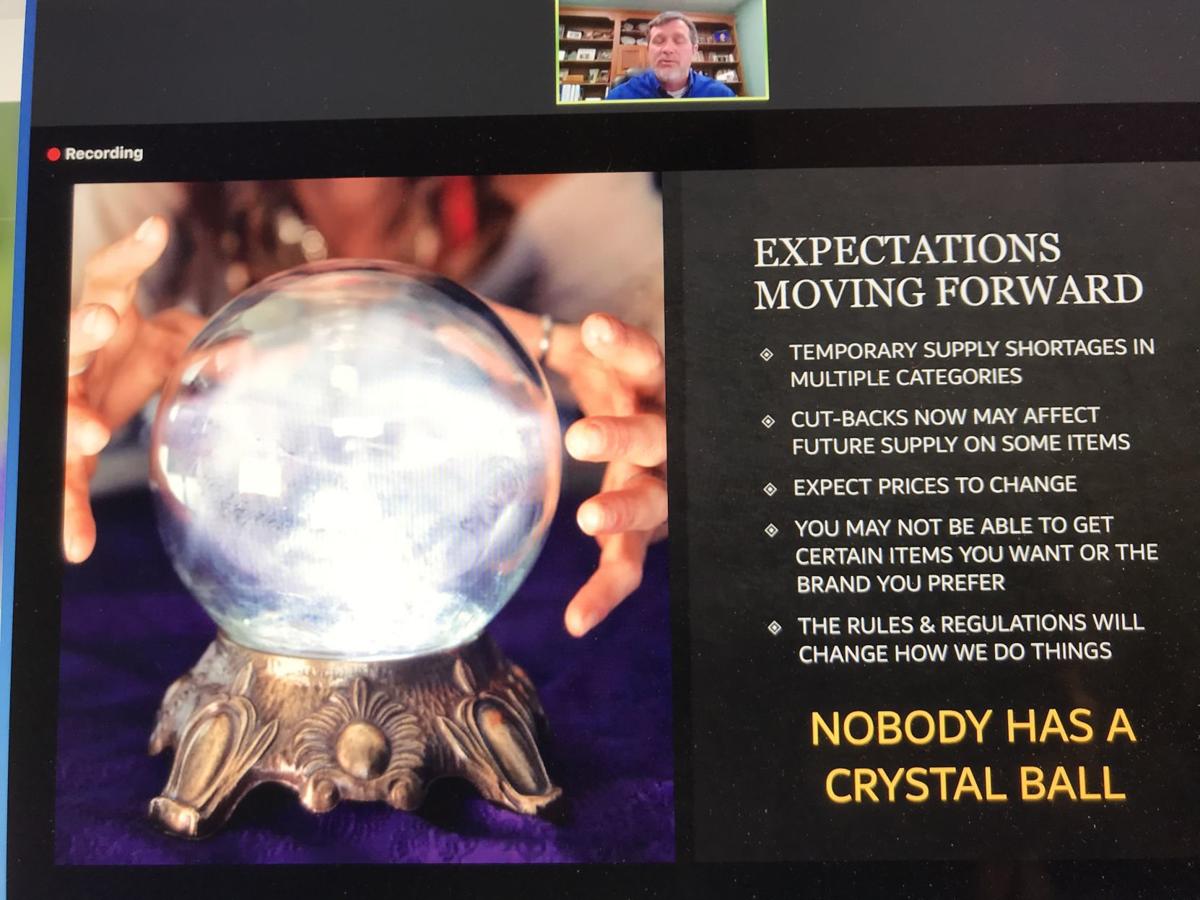 During a State of the Community presentation Merchants Grocery President Chris Smythers discussed the impact of the coronavirus pandemic on local businesses and questions for the economy going forward. 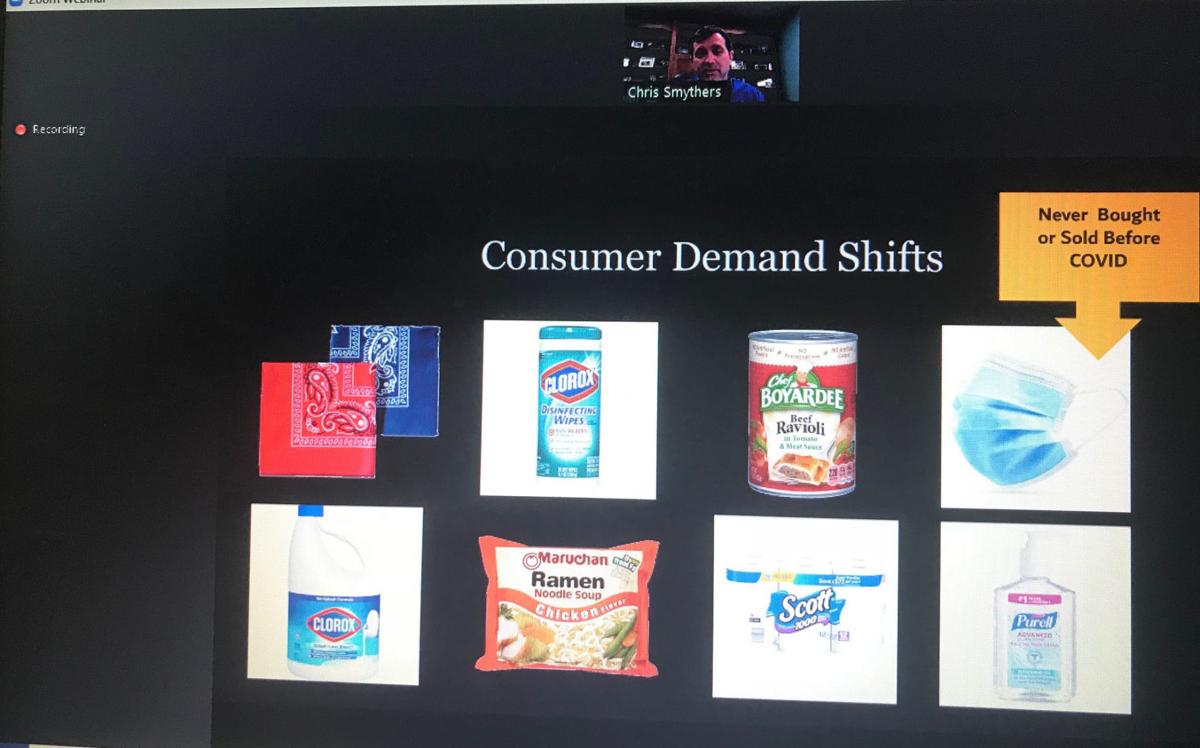 A slide illustrates food supply shift as part of Merchants Grocery President Chris Smythers' recent presentation on the topic during the Culpeper Chamber State of the Community program on Zoom. 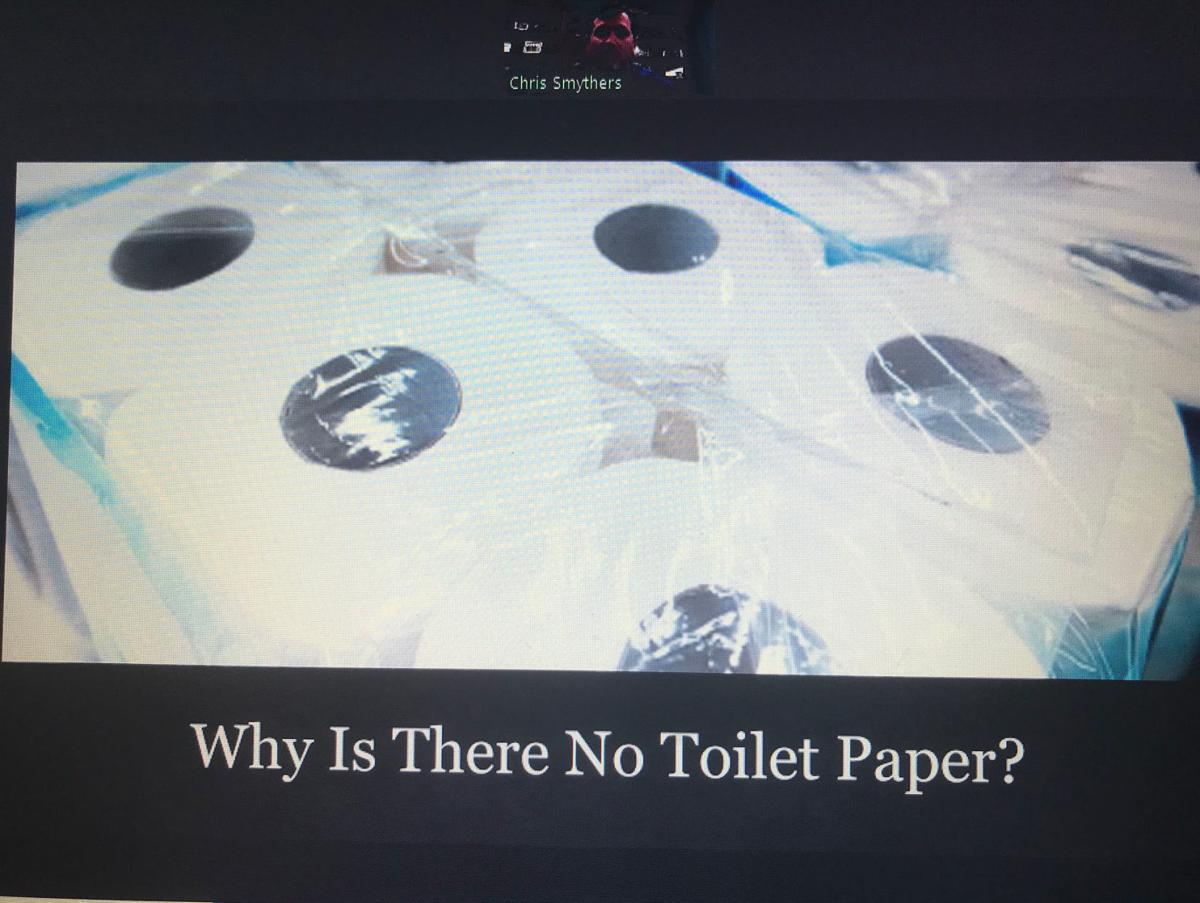 Chris Smythers, president of Merchants Grocery Co. of Culpeper, attempts to answer this question during the recent Culpeper Chamber of Commerce State of the Community program on Zoom.

During a State of the Community presentation Merchants Grocery President Chris Smythers discussed the impact of the coronavirus pandemic on local businesses and questions for the economy going forward.

A slide illustrates food supply shift as part of Merchants Grocery President Chris Smythers' recent presentation on the topic during the Culpeper Chamber State of the Community program on Zoom.

Chris Smythers, president of Merchants Grocery Co. of Culpeper, attempts to answer this question during the recent Culpeper Chamber of Commerce State of the Community program on Zoom.

Most aspects of life changed two months ago when the grip of the pandemic started being felt in the U.S., Virginia and in Culpeper.

The food supply chain was impacted as demand soared and the way people worked changed drastically.

Local professionals spoke on these topics in presentations held during the recent Culpeper Chamber of Commerce State of the Community program on Zoom.

Event sponsor Dave Groot, president of local family-owned IT service and security business Windstar Technologies, Inc., spoke on the shift to telecommute and the technology aspect on which many have increasingly depended.

Groot is author of, “The Threat is Real: Protecting You and Your Family from the Global Threat of Cyber Crime,” and an IT expert for small to mid-sized companies, with more than 25 years of experience.

“This was supposed to be taking place in March and now here we are in May—who would have thought we would be doing it virtually?” he said.

Groot said he could remember when the internet was born in 1994. It was “this brand new service in town,” no one knew what it was and many doubted it would be around for more than a couple of years, the Culpeper professional said.

“I had to convince business owners that having an email address was a good thing. It was the way we were going to be communicating with each other in the future,” Groot said of the concept initially met locally with skepticism. He still insisted internet was the wave of the future.

Now, as Groot has helped local companies develop IT solutions before and during this stay-at-home era, he hears from customers when their email is down, and how they can’t live without it.

In 2020, there are more than 4 billion internet users globally connecting on more than 15 billion devices, Groot said: The world is truly “a digital universe.”

In just a few short months’ time, the Culpeper community, like in many other places, has substantially changed with the vibrant economy all but disappeared, he said. Small businesses are struggling to survive.

“We also hear how we were not prepared, how we didn’t see this coming. This crisis is different than most in that it affected everybody everywhere all at the same time and nobody was prepared,” Groot said.

The viral spread caused businesses to deploy technologies for remote work. At the same time, it left owners, managers and employees vulnerable to cybercrime, which “like the coronavirus, knows no boundaries,” Groot said.

A hybrid workforce has emerged with people working from home, rotating with those working in the office, while the new business casual dress code means wearing a face mask, the business owner said.

“When can we go see a movie or have our next family gathering? Will it be next year or more of the same or will we finally get through this crisis?” Groot said. He said people should probably be prepared to adjust their schedules for at least a few more weeks of stay-at-home.

Resuming a more traditional way will depend on having a vaccine, Groot said, noting cyber threats must be managed as well—malicious emails, dangerous links, adjusting network access.

Windstar Technologies has been helping local small businesses enable a remote workforce, but that is nothing new, the IT guy said: “We have been helping with this all along.”

Though it’s needed now more than ever.

Also in great demand at the moment are grocery products—in large amounts. Merchants Grocery Company President Chris Smythers testified to that during his State of the Community presentation. Established in 1913 in Culpeper, Merchants Grocery distributes products to 550 convenience stores, 400 schools, and many more restaurants, nursing homes and prisons in Virginia, West Virginia and Maryland.

“Why is there no toilet paper?” said Smythers of a popular pandemic topic. Many other products were also completely out of stock at the domestic onset of COVID-19, and continue to be, as the supply chain catches up with panic buying demand, he said.

It’s sort like a snow storm, Smythers said, of usual weather-related shortages of milk, eggs and bread (the top three) followed by batteries, water and snow shovels. It’s because three-quarters of groceries are driven by truck drivers hindered by road conditions.

“This is temporary and really short term,” he said. Hurricanes, a plant fire, tornado, drought and flooding are other events that can cause shortages, but isolated to certain areas or states. Hurricane Florence killed 5,000 hogs in North Carolina, Smythers said: “We all saw some effect from that, but it wasn’t global.”

The entire world aspect is what makes COVID-19 so different, he said: “Everyone is affected. It is global instead of regional. It has affected every single business you could possibly imagine.”

Every piece of that supply chain is critical and linked to others, Smythers said. In addition, the level of consumption has changed and food processing and manufacturing have been impacted, he said. Raw materials are being thrown in the trash.

“We are all prepared to handle normal spikes for small events, but no one saw this coming,” he said.

It takes time for supply lines to recover from a spike, and distributors like Merchants Grocery to see product in their Culpeper warehouse again. When consumers buy out of fear, most in demand are nonperishable items like small portions of proteins and canned goods.

Not to mention everyone is eating more at home since restaurant visits are limited, leading to more demand, Smythers said: “My boys are eating me out of house and home. Manufacturers cannot make enough to keep up with demand.”

Add to that lack of raw materials, plant closures and lack of trucks with drivers refusing to drive, afraid to get sick, he said.

Meat shortages will cause prices to spike, Smythers added, mentioning a 20 to 25 percent increase from one bacon supplier. His distributorship runs out of popular items like hand sanitizer, cleaner, wipes and yes, toilet tissue, on a weekly basis.

“Face masks—we never bought those before,” he said.

Demand for Clorox and Ramen noodles has been through the roof, Smythers went on, along with canned ravioli and bleach. Products like hand sanitizer are also slow to arrive, with supply diverted to critical functions.

Not critical anymore for food distribution are school meals, Smythers said. More than 1.3 million Virginia students stopped eating school lunches March 13, leaving millions of dollars of inventory in the warehouse, he said. Demand shifted from frozen meals to prepackaged peanut and butter sandwiches. A large part of Merchants business is schools, he added.

Consumption of food service products has halted in a lot of ways all over the country, Smythers said, and it’s impacting a lot of people down the line.

“Every crop has contracts—milk is used a lot in schools and restaurants, and the farmer has to keep milking cows or they stop producing,” he said.

The focus at Merchants Grocery has been protecting its employees and customers, the company president said. Smythers said they are doing their best to keep everyone gainfully employed with benefits and that they are working to replenish inventory through alternative supply channels.

Smythers, in conclusion, said the company is working to sell its stalled inventory before it becomes a loss.

“There are a lot of unknowns,” Smythers said and it makes budgeting difficult.

The food supply network is robust, however, he added, predicting conditions would rebound in a short time. Expect to see prices fluctuate, Smythers said: “All of us will have to adapt.”