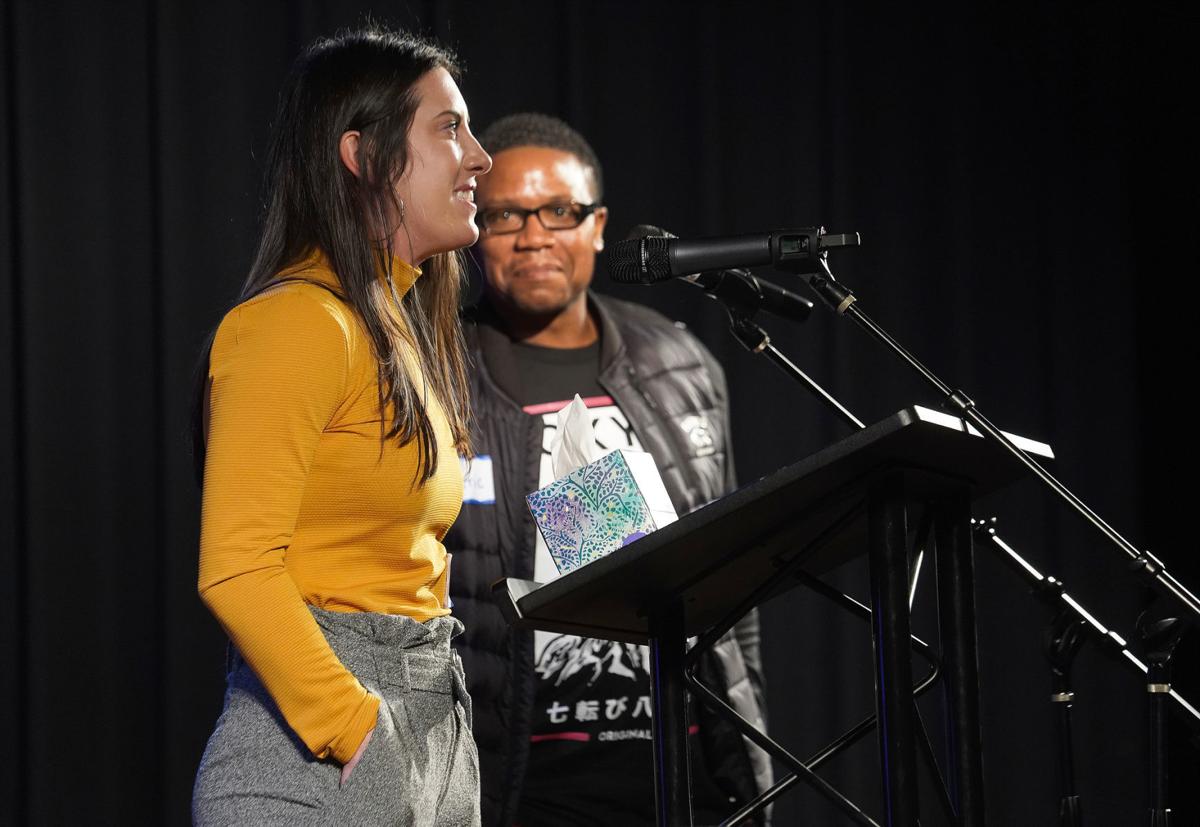 Kaitlyn Smith talks about meeting Aeric McCoy (right) and helping him deal with his drug addiction. She says the experience changed both of their lives. 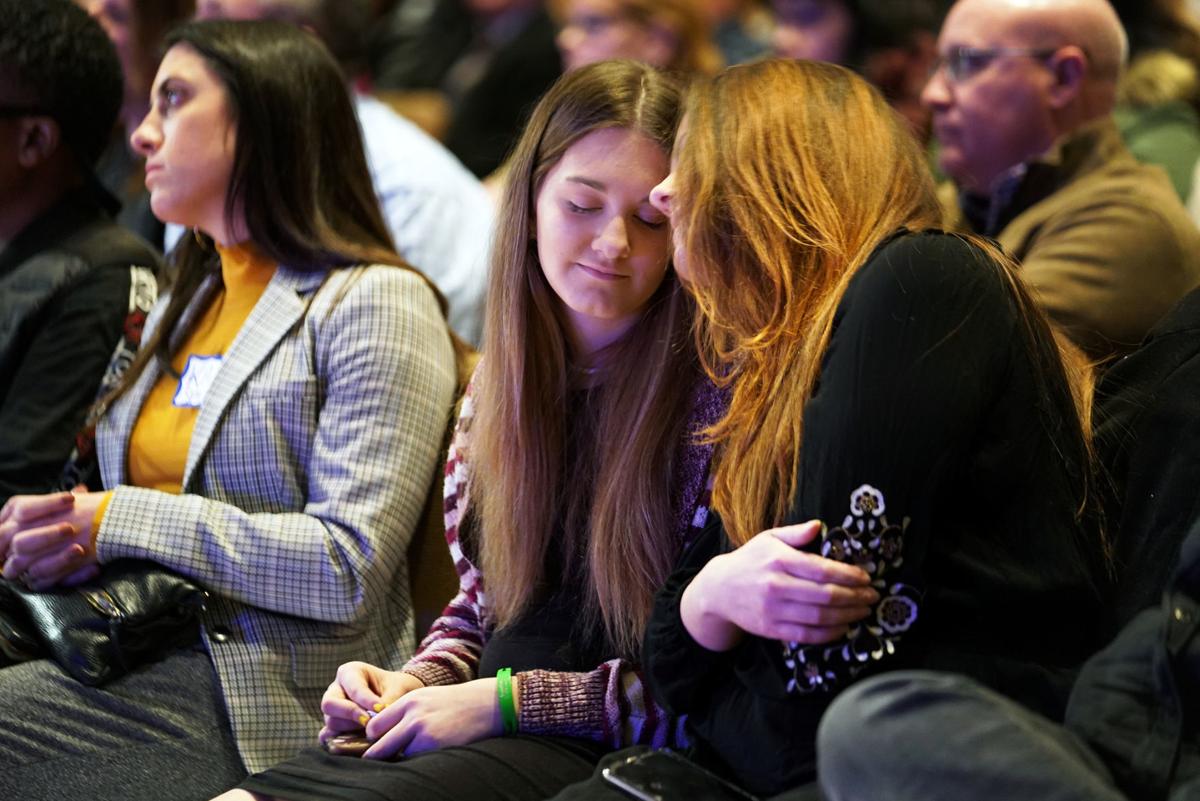 Overcoming drug and alcohol addiction helped Cheryl Ruedi (right) reconnect with her 13-year-old daughter Alexis. 13, after the mother was addicted to drugs and alcohol for 16 years. Cheryl Ruedi considers her daughter her inspiration. 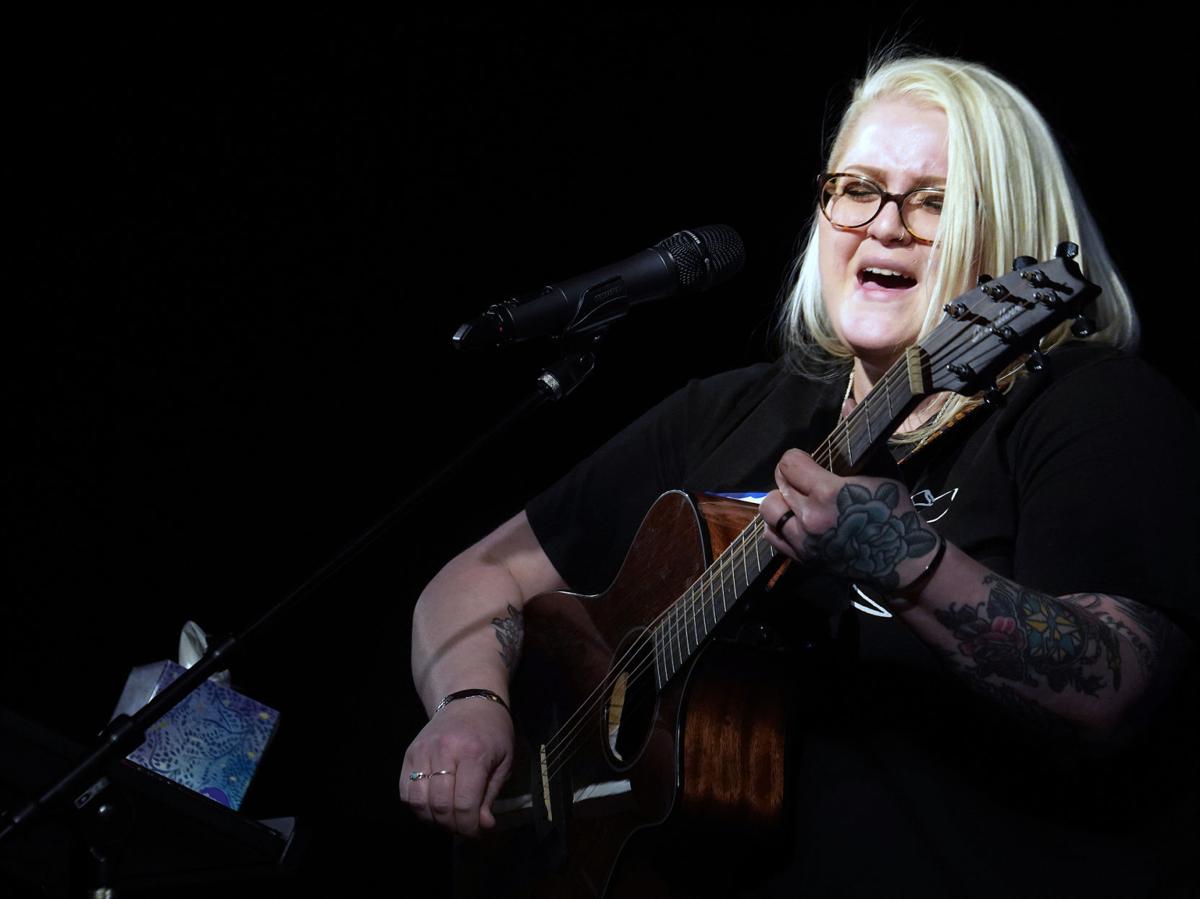 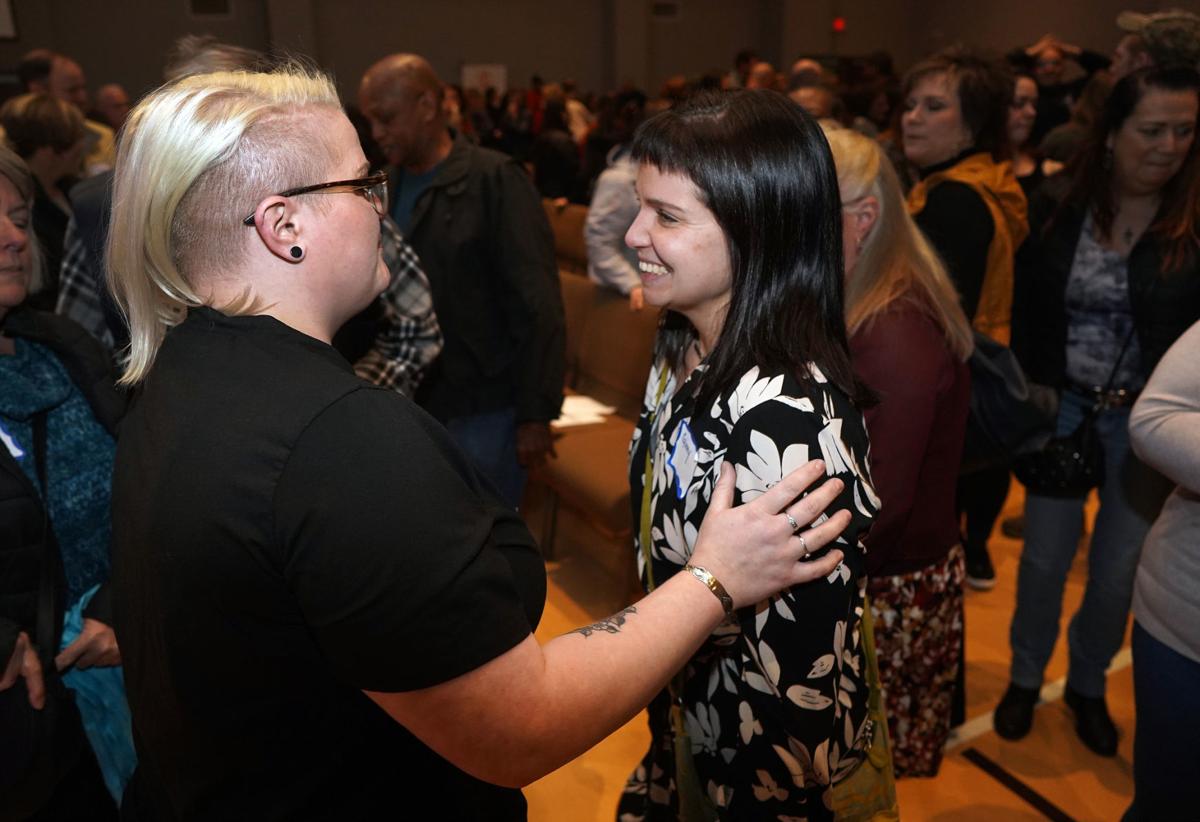 Childress (left) and Ginny Martineau share their stories about addiction and recovery. during Saturday’s event, which drew more than 300 people. 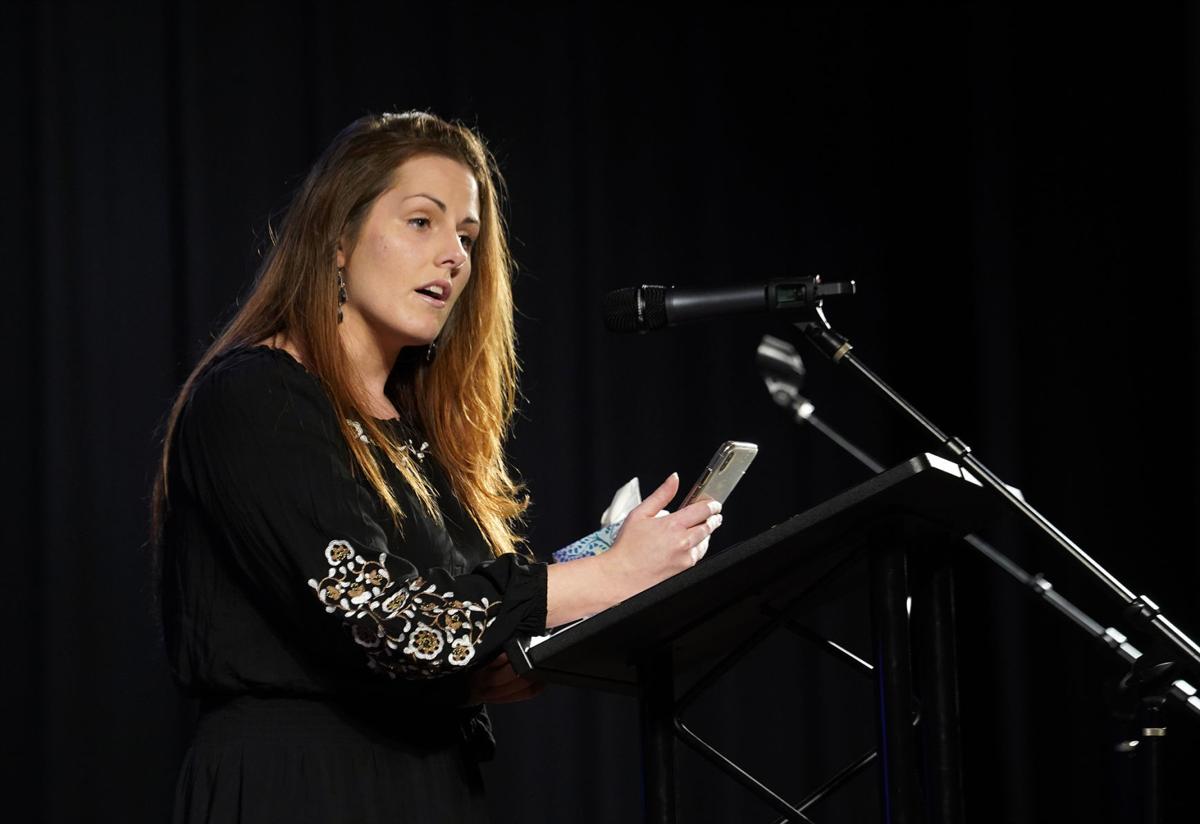 Cheryl Ruedi overcame addiction after 16 years, but lost the man she loved to drugs last July.

Kaitlyn Smith talks about meeting Aeric McCoy (right) and helping him deal with his drug addiction. She says the experience changed both of their lives.

Overcoming drug and alcohol addiction helped Cheryl Ruedi (right) reconnect with her 13-year-old daughter Alexis. 13, after the mother was addicted to drugs and alcohol for 16 years. Cheryl Ruedi considers her daughter her inspiration.

Childress (left) and Ginny Martineau share their stories about addiction and recovery. during Saturday’s event, which drew more than 300 people.

Cheryl Ruedi overcame addiction after 16 years, but lost the man she loved to drugs last July.

Cheryl Ruedi held nothing back as she stood in front of a packed church sanctuary Saturday night and described her descent into drugs.

She was 13 when she tried her first pain pill and thought it offered all the answers, but her need for more quickly turned into her biggest problem, she told the crowd at River Club Church in Spotsylvania County.

In the 16 years that followed, Ruedi sold her body, lied and cheated to get a fix. She lost friends and jobs, cars and homes and let others be responsible for her daughter. She overdosed more times than she’d care to admit.

“I’d like to say addiction took everything from me,” the Spotsylvania native said, “but I gave it away.”

When Ruedi got to the point she wanted to change—she knew she’d be dead if she didn’t—those who loved her helped her “dig out of the grave.” She got into a recovery program and has been clean for a year, but the heartbreak of addiction didn’t end when she stopped using.

She and Justin McCarty, the man she described as the love of her life, were in recovery together, and by all accounts, things looked promising. She’d been able to reestablish a relationship with her daughter, Alexis, and McCarty “completed” their family.

“But this disease called my mate’s name for the last time on July 3, 2019,” his 32nd birthday, and Ruedi found him dead “on our brand-new couch in our brand-new home.”

While his death shook her to the core—and she feels guilty that she survived addiction and he didn’t—Ruedi didn’t let it become a reason to use again.

“I stand here today in honor of Justin McCarty,” she said. “I’m here as a sign of hope that any addict can stop using drugs and find a new way to live. It’s going to take work and you have to take it one step at a time—12 steps to be exact—but there is a way out.”

That’s the message organizers wanted to promote with the forum, “Addiction … Inspiring Hope.” Greg and Penny Traber, along with Mark and Sue Anderson, designed the event to share “stories that will break your heart but also give you hope,” Greg Traber said as he opened Saturday night’s program.

“Look at all the stinkin’ people that are here,” he said. “This is freakin’ awesome.”

Organizers didn’t know if the event would attract 20 or 200 people, so the Trabers optimistically had volunteers line up 250 seats in the church. As the crowds rolled in—and parking spilled over to the nearby Food Lion on Tidewater Trail—more chairs were needed as the turnout topped 300.

Greg Traber is a substance abuse counselor who recently celebrated 20 years of sobriety, and his wife has been by his side every step of the way. As she thought about others caught up in the opioid epidemic, which has claimed 702,000 American lives since 1999, she wondered how they might give others hope in the midst of such hopelessness.

The Andersons wanted to be involved, too, though Mark Anderson opened his remarks on Saturday by saying his story wasn’t one of the wonderful ones about survivors. Instead, his son, Will, died on Thanksgiving 2010, after a two-year spiral in which he changed from “the sweetest, kindest person you ever met” to an angry young man who “hated everything he was becoming.”

Mark Anderson said he’s glad there are resources available—and representatives from several agencies set up displays Saturday—because finding help to deal with his son’s addiction was hard to come by in 2008 when their ordeal began.

He and his wife often share their story privately with other parents facing the same anguish, of having a child caught up in drugs or lost to them.

“We can’t focus on what should have been,” he said. “We have to accept that this is what happened and we had to do what we could to try to help others who are grieving.”

Rachel Childress was among those who thanked him for sharing. She is a recovering drug addict who realizes “that could have been my dad standing up here, telling my story.”

She sang several songs about addiction and described, as others did, the way alcohol, and later drugs, gave her more courage or made her feel good in her own skin. But like Ruedi, the initial high morphed into a constant need.

No one promoted a particular doctrine, but most speakers credited participation in an ongoing step program and their belief in a higher power for their sustained recovery. Still, Childress, who has been sober for more than eight years, didn’t want anyone in the audience to think her life is perfect.

“That’s not true, but I never have to use or drink to deal with problems, and that is a freedom,” she said. “You can have that, too. I just want you to know there’s a way out, and there’s a better life than what you’re living right now.”

She offered to talk, one-on-one, after the program, and audience members lined up to speak with her and others who shared their stories.

Since the organizers started publicizing the event, six people have committed to a recovery program, Penny Traber said. Anyone interested in more information can call her at 540/847-3932.