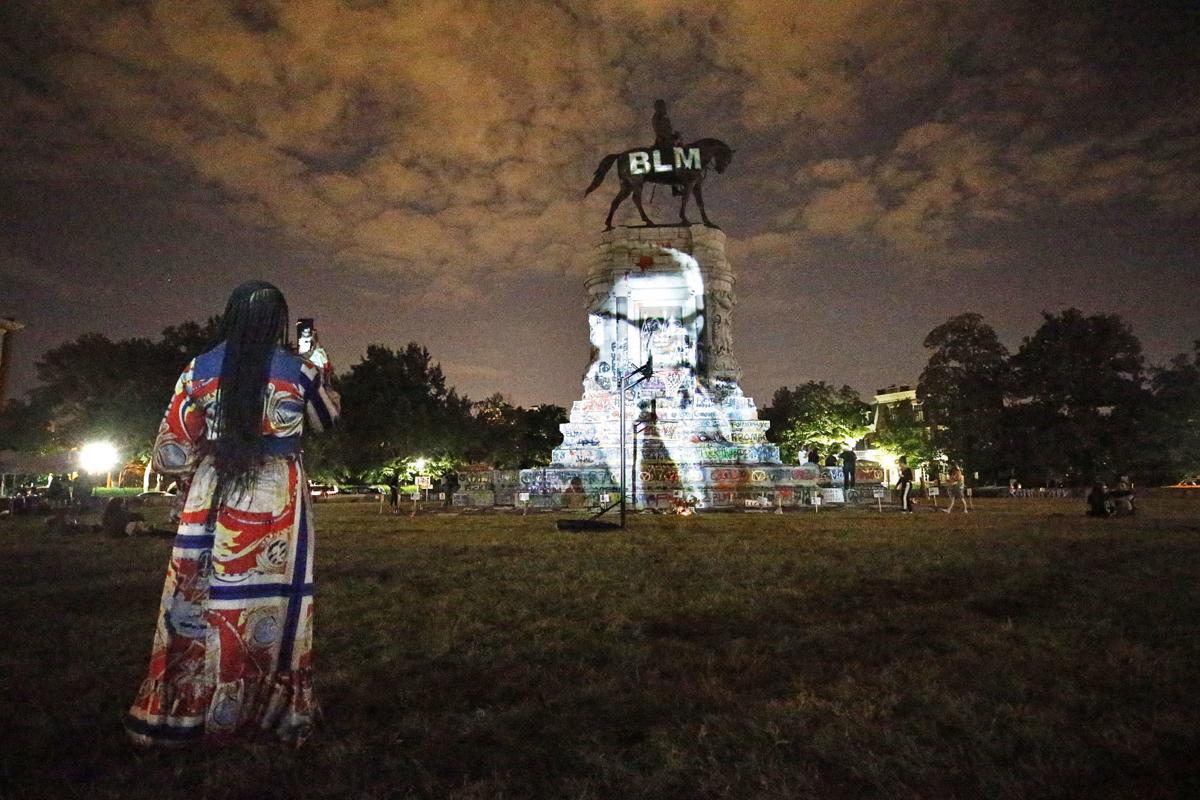 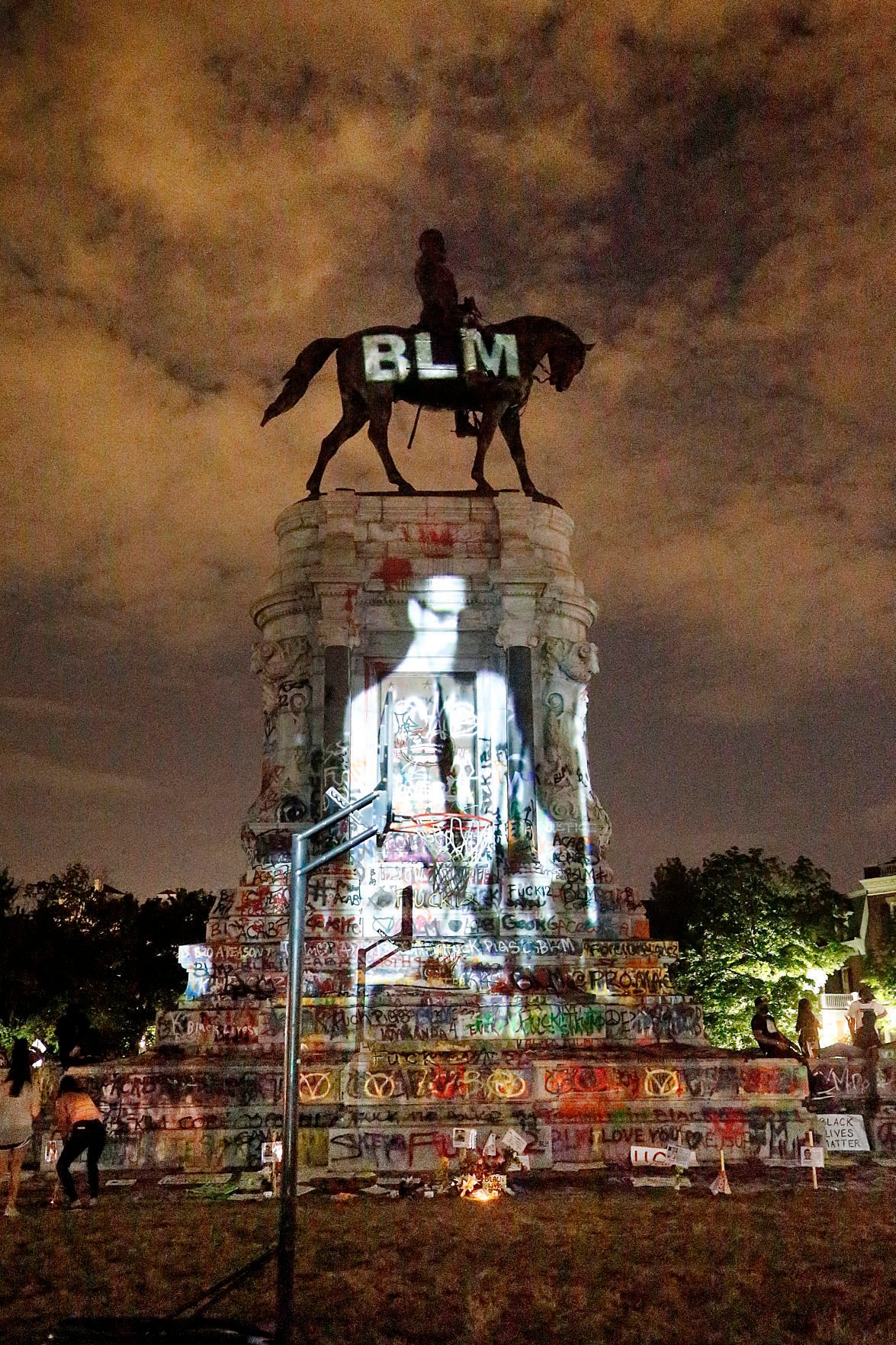 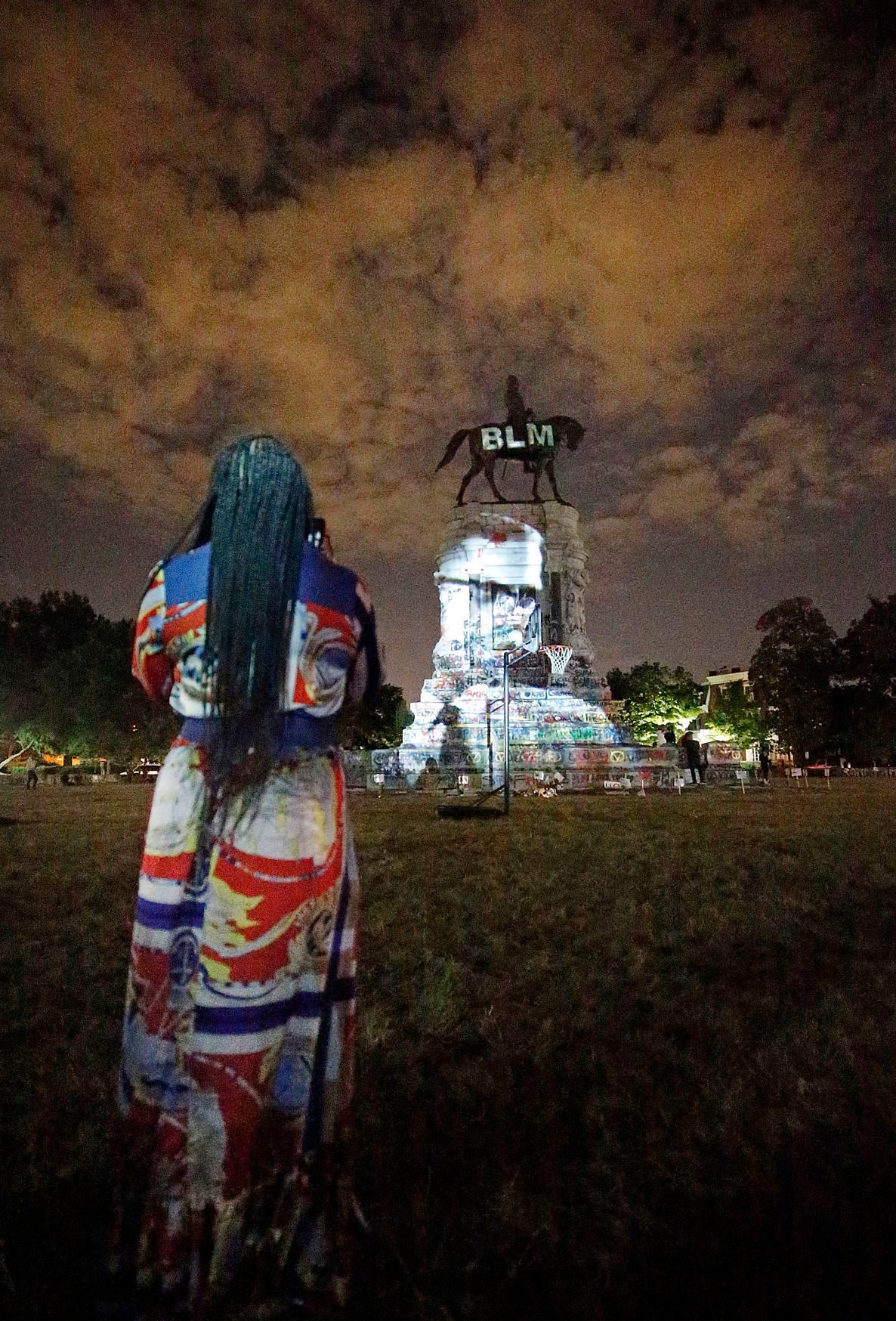 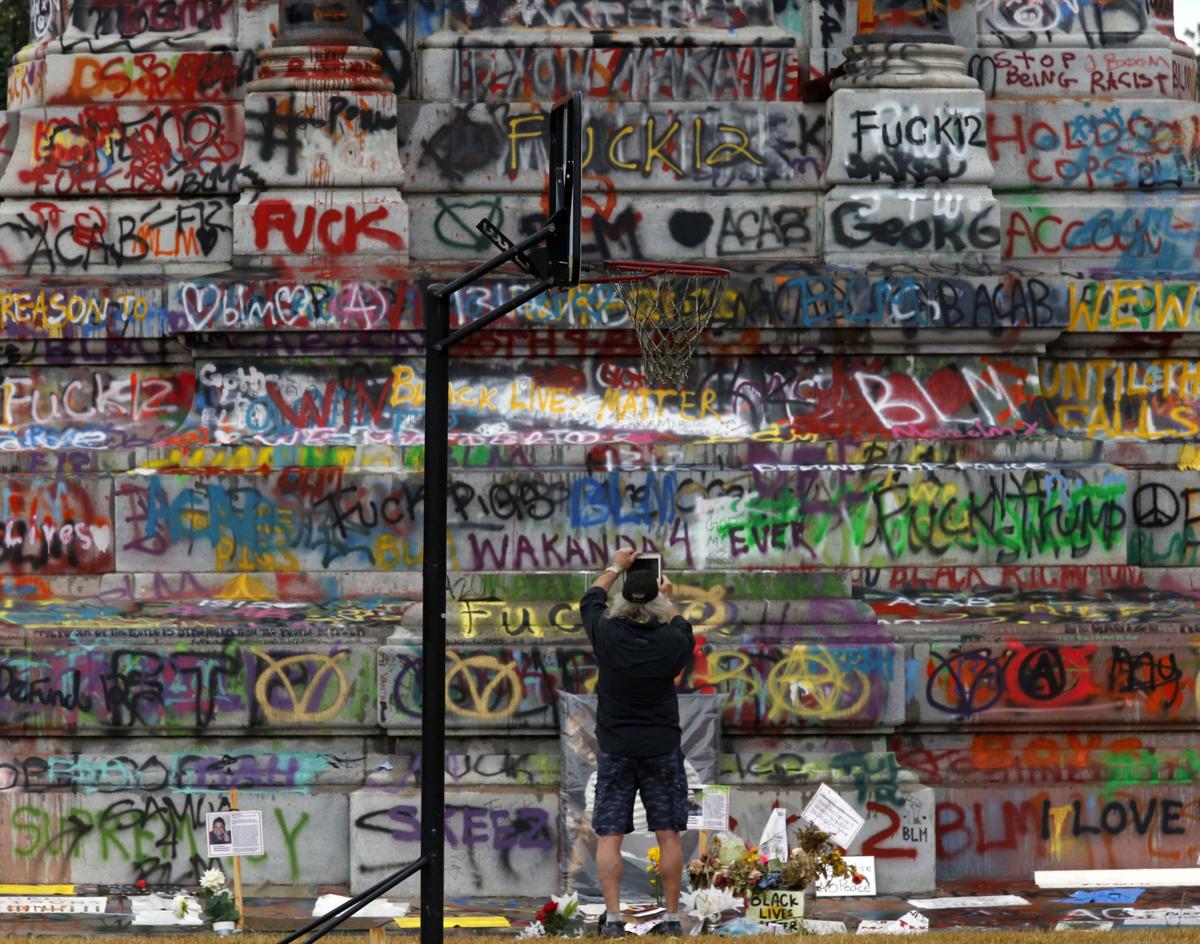 A man takes photos of graffiti covering the base of the Robert E. Lee statue on Monument Avenue in Richmond Wednesday. 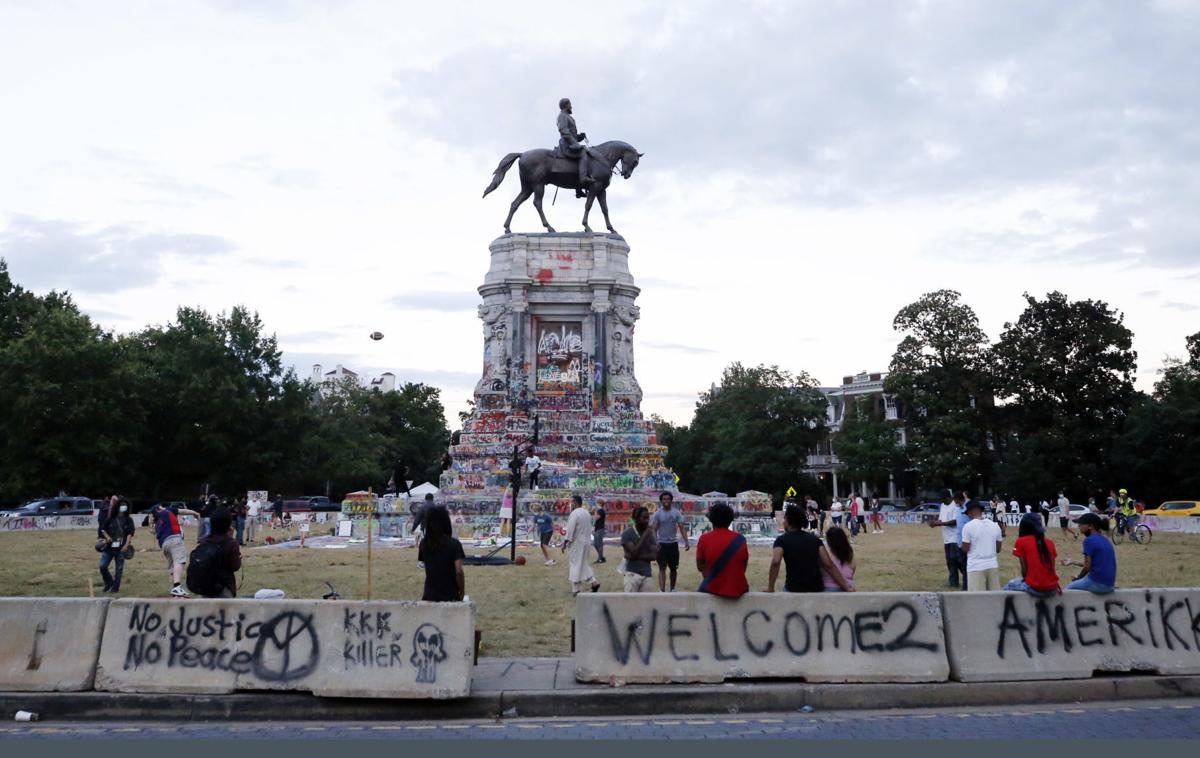 Meghan McIntyre knelt down on the sidewalk surrounding the Robert E. Lee statue with the $5 can of red spray paint she had purchased at Lowe’s. In the past three weeks, she says she has been gassed three times, arrested and put in jail.

On Thursday night, she returned to Monument Avenue, where protesters have gathered the past 20 days, and wrote her first graffiti message in curvy letters 10 feet across: “You’ve f---ed with the last generation.”

McIntyre, 21, who is white, says her generation won’t tolerate racial prejudice or bigotry. She is one of several protesters who said Thursday that they keep returning to the circle of grass around the Lee statue despite the physical and mental pain they’ve endured.

“Everyone my age feels that way,” she said. “We’re not stopping.”

A Richmond judge on Thursday extended an injunction that will keep the 130-year-old statue in place for the time being.

In the past three weeks, some protesters in Richmond have been met with tear gas, arrested, knocked to the ground and shot with rubber bullets. Many of them have been nonviolent.

But police say their officers have been exposed to acts of violence. Virginia State Police tweeted on Thursday that a sergeant was hospitalized after a chunk of asphalt was hurled at him outside the Richmond Police Department headquarters. State police said protesters have thrown urine-filled balloons and that police have intercepted ball bearings and Molotov cocktails.

McIntyre was one of 233 arrested May 31 for breaking curfew. She said she spent five hours handcuffed on a bus and that she was strip searched, fingerprinted and photographed for a mug shot. She said she spent the night in a cold one-person jail cell and was released the next day, 16 hours after her arrest.

It was a traumatic experience, she said. But she has continued to return to the Lee statue nearly every day. She said there’s an anger still inside her, but she won’t let it affect her.

Alice, another protester, has been impacted more. She called a therapist, and her body shakes whenever she talks about Monday night. But she, too, keeps coming back to the Lee statue.

“Somebody’s got to say something,” she said.

Alice, 28, who is white and gave only her first name, said she is among demonstrators who have qualms about identifying themselves to the media.

She said she was amid protesters Monday night outside the Richmond Police headquarters when suddenly, the air filled with green, brown and white gas. She said a large police officer pushed her to the ground and officers detained her.

She said an emergency medical technician later told her she might have a concussion. An officer offered to call her an ambulance, but told her it could cost $700, and Alice doesn’t have insurance. Instead, she sat with a bystander and later walked to a friend’s nearby home to sleep.

Four days later, her head still hurts. Accompanying her Thursday night at the Lee statue was Brinnay Bell, who is black, and who said she had been hit in the calf with a rubber bullet. Bell was much more relaxed as she reflected on the events of Monday night, Alice said.

Another man, who identified himself only as Rosé, says he also knows what it’s like to confront tear gas. He was at the Lee statue June 1 when police fired tear gas at peaceful protesters, prompting an apology from Mayor Levar Stoney the following day.

Rosé, too, chose Thursday night to write his first graffiti message on the Jersey wall that was installed Wednesday morning and encircles the statue. By Thursday night, nearly the entire ring had been filled with spray paint messages. Rosé wrote the words “Armed w melanin.”

“You can’t be unarmed when your skin is the ultimate weapon,” said Rosé, 27, who is black. He thought back to the black men whose deaths have catalyzed a movement against police brutality and racial prejudice. He said no matter what they had in their hands, they were considered a threat. Trayvon Martin was carrying a bag of Skittles. Keith Lamont Scott, fatally shot by a police officer in Charlotte, N.C., in 2016, was reportedly holding a book.

Nearly three weeks after his first brush with police, Rosé was ready to say something. So he approached a man near the Lee statue and asked to borrow a bottle of spray paint.