LEFT: Town resident Martha Weisenberger wants to help alleviate homelessness in Culpeper and provide more homes where low income people can actually afford to live. To join the cause, contact her at sheltersolutionsculpeper@gmail.com 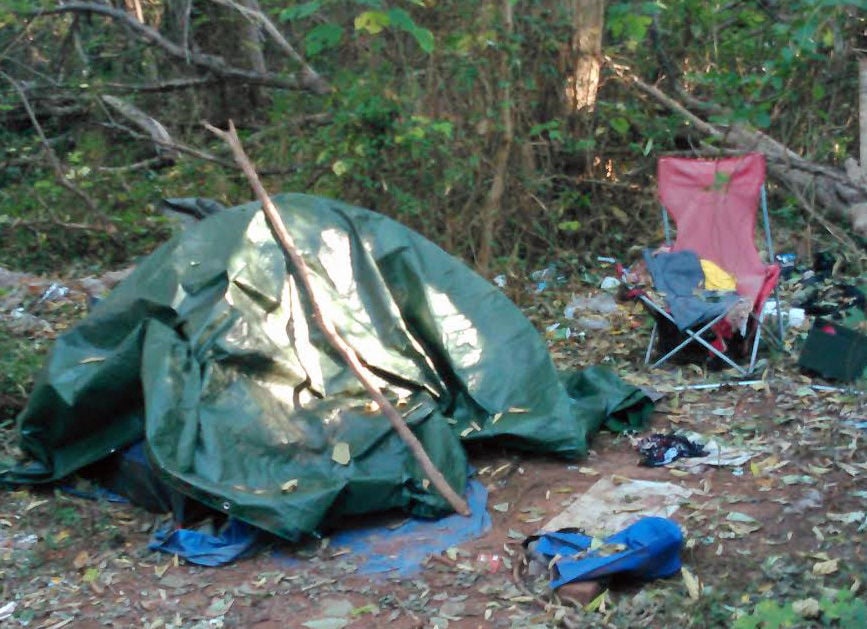 ABOVE: Behind a local big-box store evidence is found of a camp where a homeless person was living, in a Star-Exponent file photo taken several years ago. Culpeper town and county are examining ways to reduce homelessness in the area.

LEFT: Town resident Martha Weisenberger wants to help alleviate homelessness in Culpeper and provide more homes where low income people can actually afford to live. To join the cause, contact her at sheltersolutionsculpeper@gmail.com

ABOVE: Behind a local big-box store evidence is found of a camp where a homeless person was living, in a Star-Exponent file photo taken several years ago. Culpeper town and county are examining ways to reduce homelessness in the area.

One local woman wants to help ease homelessness in Culpeper with the creation of a year-round shelter and permanent homes that low income folks can actually afford.

Retired corporate accountant Martha Weisenberger is on a mission to sound the alarm about the inadequate state of area “affordable” housing, as well as the increasing number of neighbors without a place to call home. A local coalition is reexamining the oft-discussed issue as well, even as homelessness spikes in Culpeper, now the fifth-biggest small town in the state.

“Most people in our community are like me—they don’t realize what is happening,” said 71-year-old Weisenberger, a town resident since 2007.

During her 40-plus years in finance, she took steps to ensure she could live comfortably in retirement, but when she went to apply for the apartment she currently rents near Yowell Meadow Park, Weisenberger faced unexpected news.

“I was told that my monthly income was not three times the rent, and therefore I did not qualify to live here,” she said. “My daughter had to furnish a letter stating she was supplementing my income so that I could qualify. If it was not for my daughter, I could be on the streets.”

Living simply and well within her means, Weisenberger opted to sell her car. She gets around on foot, or uses the public trolley. On the trolley, she often meets local people who lack the means for dependable housing. These meetings sparked her interest to try and seek solutions.

Weisenberger was also prompted to action because she personally knows a homeless man who used to be her neighbor.

“He lived in a trailer that caught fire a few years ago and lost everything,” she said.

Weisenberger ran into the 73-year-old man a few months ago in a local store, and learned that his living situation is dire.

“He has had two strokes and his Social Security check is $710 a month,” she said. “He told me that he has applied at the low income apartment complexes in town, but he didn’t have enough income to qualify. Another one has a three-year waiting list.”

“We need to get a consortium of people with big hearts not looking for a tax break of a monetary return on investment,” Weisenberger said. “We need to get people to think outside of the box and to remember the Golden Rule.”

On Friday, the retiree met with a contractor in a large, empty, former industrial building on North Main Street to explore its possibility as a year-round homeless shelter.

Weisenberger is also exploring a way to encourage local builders—“We have a lot of builders in Culpeper,” she said—to construct tiny houses for people with limited means.

“While we will always have those who are out there looking for a handout, my goal is to help the seniors who have paid their dues and have a meager income and also the working poor who need a hand up.”

It is a challenging prospect, Weisenberger admitted, but if everyone—including the business community—did a little bit, it could add up to something big.

“I know we have angels out there,” she said. “I am trying to get the word out and find others who want to work together to do something.”

Anyone who has ideas or is willing to help with donations, fundraising or good old prayer can send her a note at sheltersolutionsculpeper@gmail.com.

Local homeless on the rise

Rapid growth in Culpeper the past two decades—the population has doubled since 2000 to 19,132 in town—brought an influx of new, expensive housing and an eventual high-foreclosure rate. The lack of housing supply for those of low and lower-middle incomes has also contributed to a greater and more visible homeless population.

Each year, the Rappahannock Rapidan Regional Commission’s Foothills Housing Network does a Point-in-Time count of homeless in the five-county region. The count is conducted on a single night when volunteers visit local shelters and scour parking lots and “tent cities” where homeless people are known to live.

This year’s count took place on Jan. 22. In the five counties, 210 homeless souls were counted, according to preliminary figures, accounting for 91 households. Of those, 66 homeless people from 34 households were counted in Culpeper, early figures showed.

The recent preliminary count revealed a 30 percent overall increase region-wide in the number of homeless recorded in 2018 and a 50 percent increase in Culpeper from two years ago.

Local elected officials have long discussed the issue of “affordable housing.” The topic is rising to the surface once again. Culpeper Human Services has compiled a Crisis Assistance Team to discuss the issue which last met on Jan. 22—the same day the Point-in-Time count was conducted.

At the meeting, Culpeper Human Services Director Lisa Peacock noted the average rent in Culpeper is $1,000, while the average Social Security check is around $850. A Foothills Housing Network survey distributed at the meeting reported that around 100 homeless people live in Culpeper and 50 percent of them have jobs. Most of the local homeless grew up here, the report found.

According to discussion at the meeting, several large rental agencies in the past two years purchased most of the units in Culpeper and significantly raised rents. This has contributed to increased homelessness, the Crisis Assistance Team learned, as well as limitations on shared housing or boarding houses in town.

The town planning commission is revamping the zoning rules, hopefully to allow more shared housing, and a regional affordable housing study is underway. Some on the team suggested pre-manufactured housing as a potential solution, while others suggested using empty space at the state correctional facility to house homeless. Team members agreed a year-round homeless shelter was needed.

Culpeper County Board of Supervisors Chairman Gary Deal serves on the Crisis Assistance Team. He said town and county leaders understand there is a lack of low-income and workforce housing in Culpeper.

“There is much collaboration ongoing right now to try and find solutions in a real estate market that is working against us,” he said.

Recent real estate statistics showed just four houses on the market in the Culpeper for less than $250,000, with multiple offers for each one, Deal said. Investors, meanwhile, are buying up many of the apartment buildings and shared homes in Culpeper, and increasing monthly rents by as much as 60 percent, according to the board chairman.

“New construction for low-income housing is difficult in Culpeper as well,” Deal added. “Tap fee structure, ordinance and zoning standards are obstacles that are being looked at. The timing is good as the town is in the process of modifying their zoning ordinance and we at the county are getting ready to update our comprehensive plan.”

In addition, he said, the Town and County Joint Advisory Committee will be meeting again to exclusively work on this issue: “Hopefully, we can start finding solutions to this very important issue facing our community,” Deal said.

Weisenberger is hopeful tangible solutions will emerge. Some more of her ideas include prompting owners of vacant buildings around town to donate them to be used for a year-round shelter and feeding site, as well to provide an address for someone who can’t get a job because they don’t have an address.

“Would the builders and developers in the area work together to build a complex of reasonable apartments that can be rented for under $500 a month?” Weisenberger said.

“Would apartment complexes set aside a portion of their units to be priced below the fair market value? Can zoning be changed to allow the building of ‘tiny’ houses that are becoming a successful alternative in other parts of the country?”

Weisenberger said she has always been a big supporter of “home missions,” that is, helping people in her own community.

“I would like our motto to be: Culpeper, Virginia—we take care of our own,” she said. “That’s where the heart has to come in.”