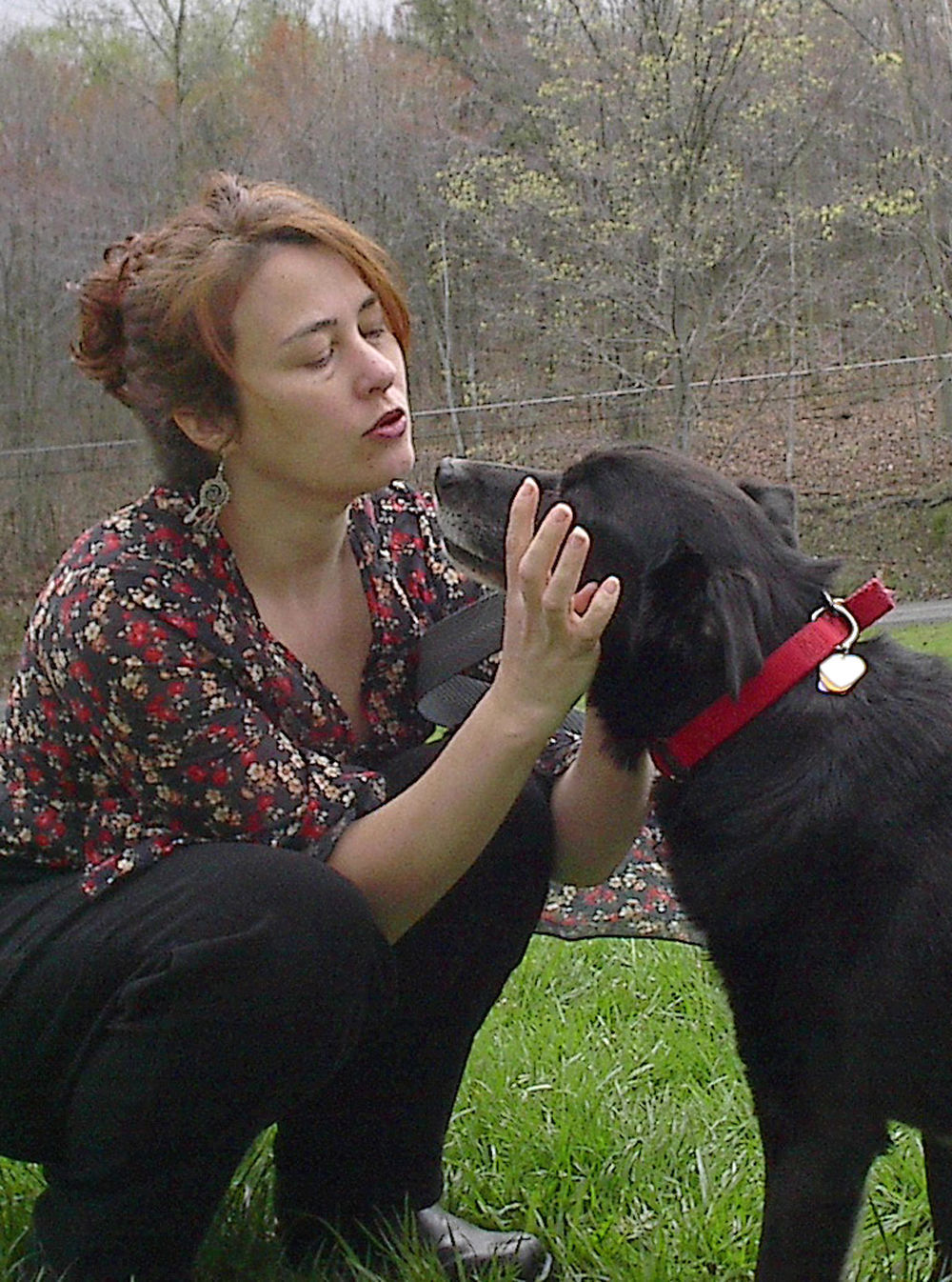 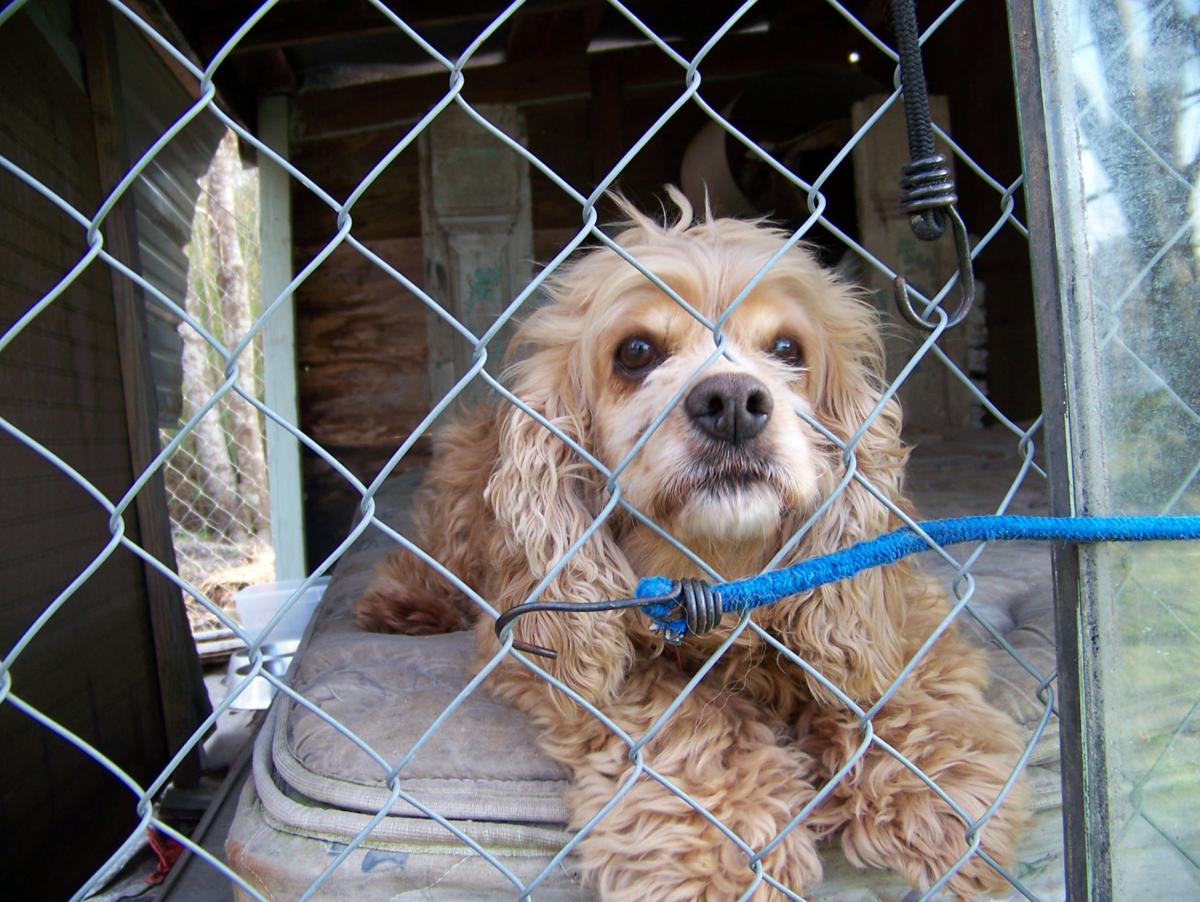 Baylee, one of many dogs rescued by Tami Thayne’s Dogs Deserve Better. 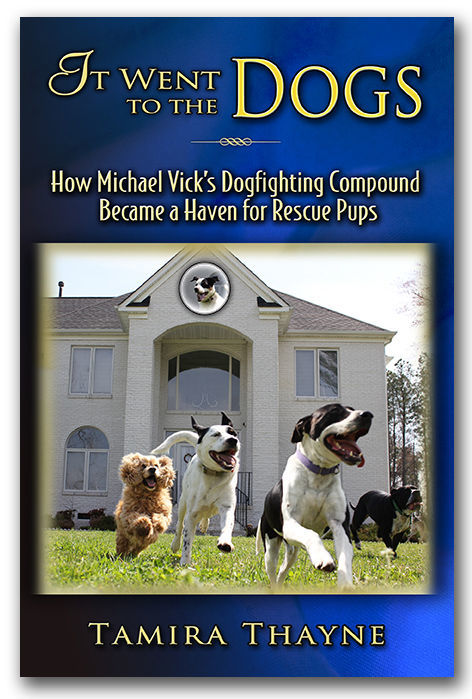 This new book by Amissville author Tamira Thayne is availalbe on Amazon and for Kindle. 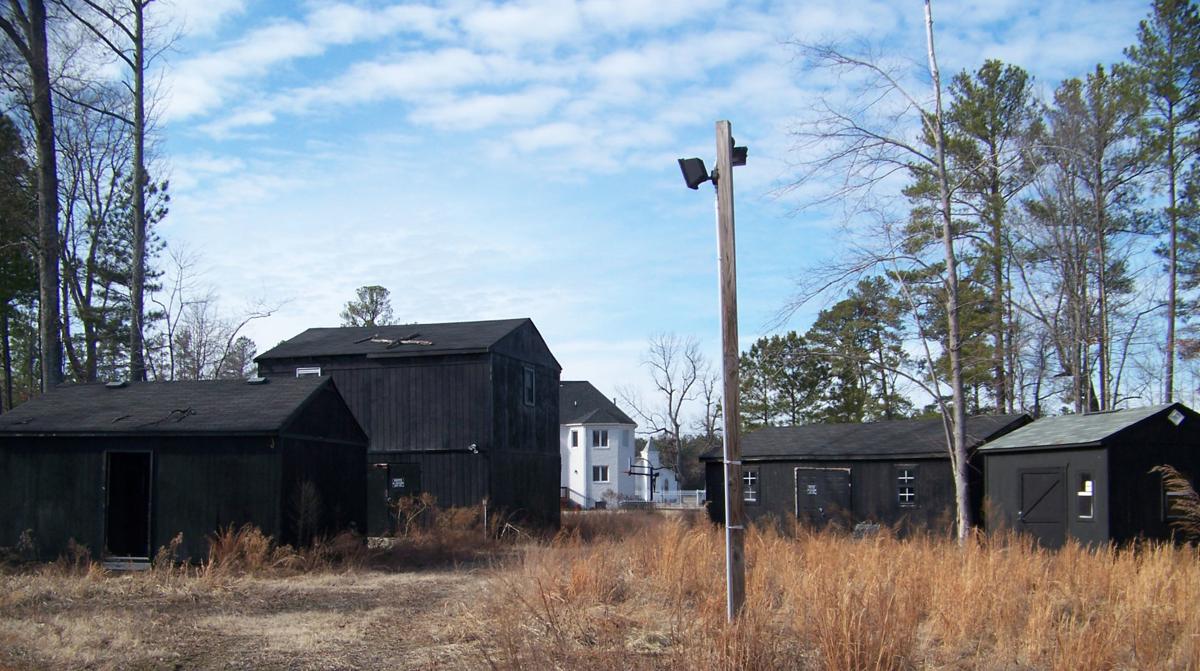 The dogfighting sheds behind the main house formerly owned by former NFL quarterback Michael Vick. Local animal activist and author Tamira Thayne turned the place into a rescue for dogs. 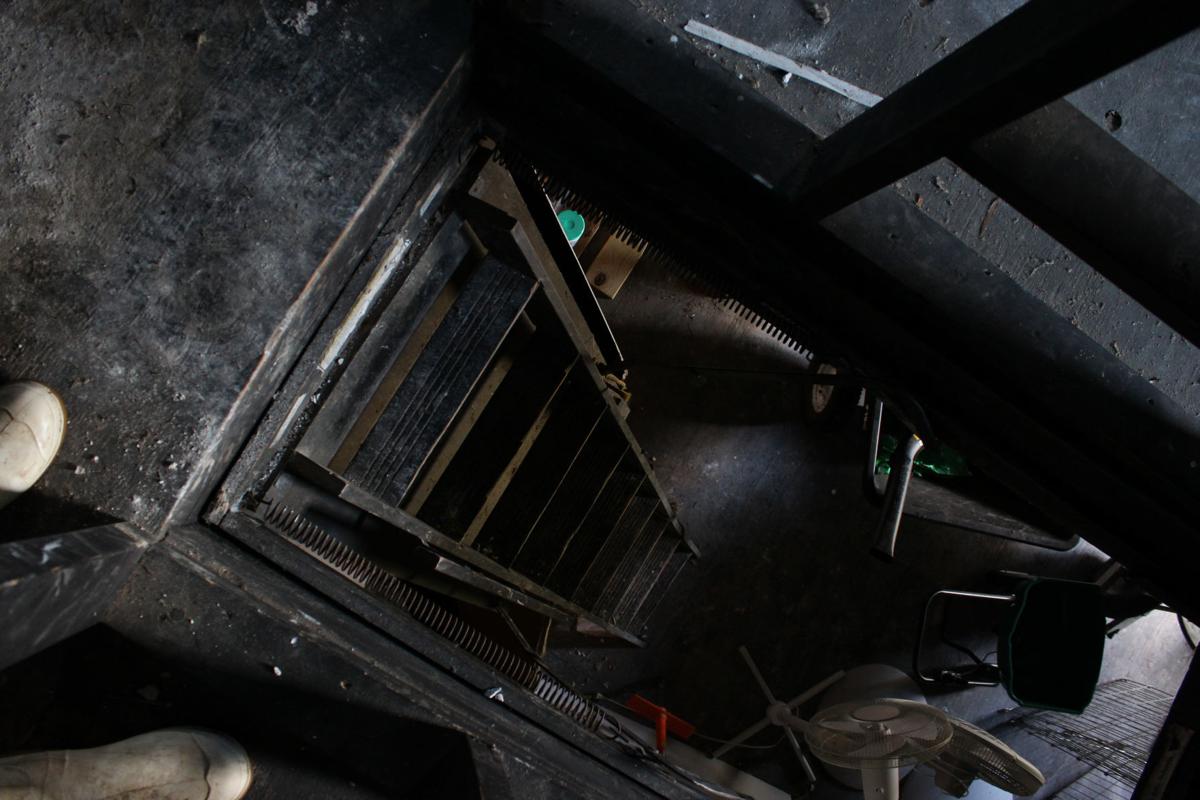 A pull down ladder leads to the dogfight arena in a shed on the property formerly owned by Michael Vick. Dogs were carried or shoved up. 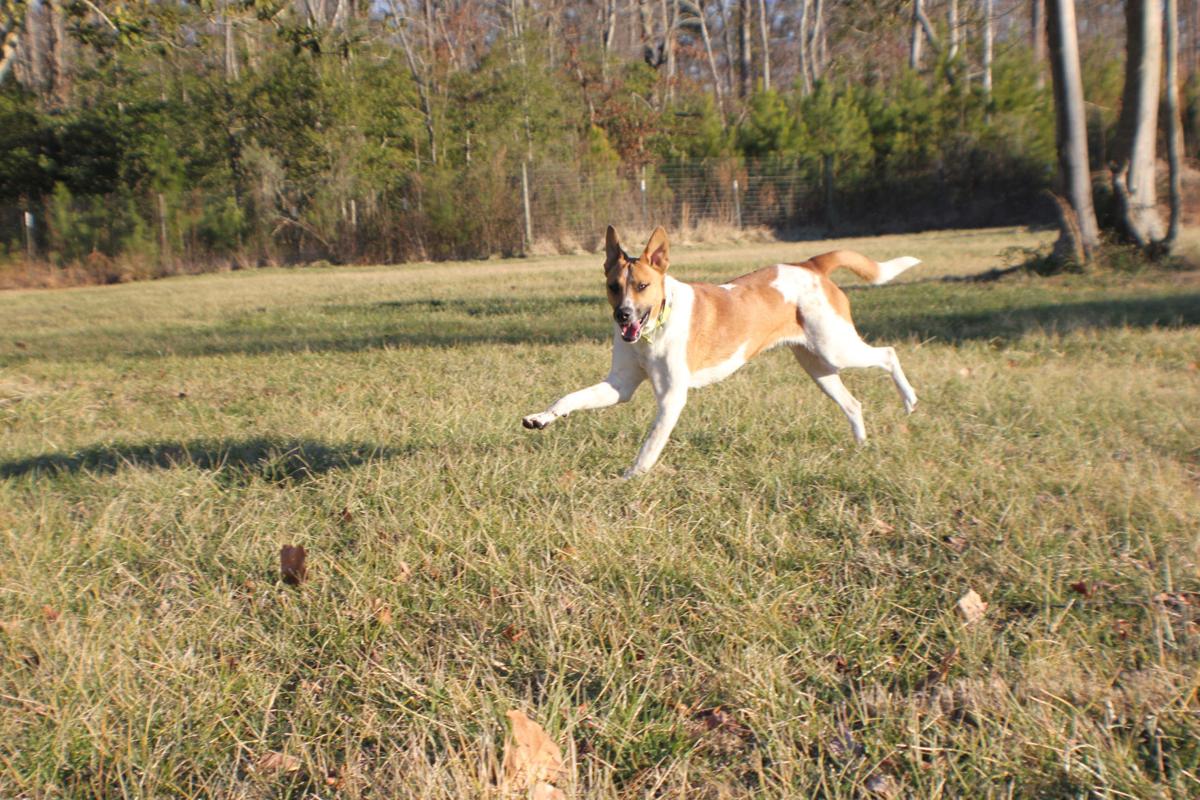 One of many dogs enjoying freedom for the first time at Dogs Deserve Better in Smithfield, established on the former property used by Michael Vick for dogfighting. 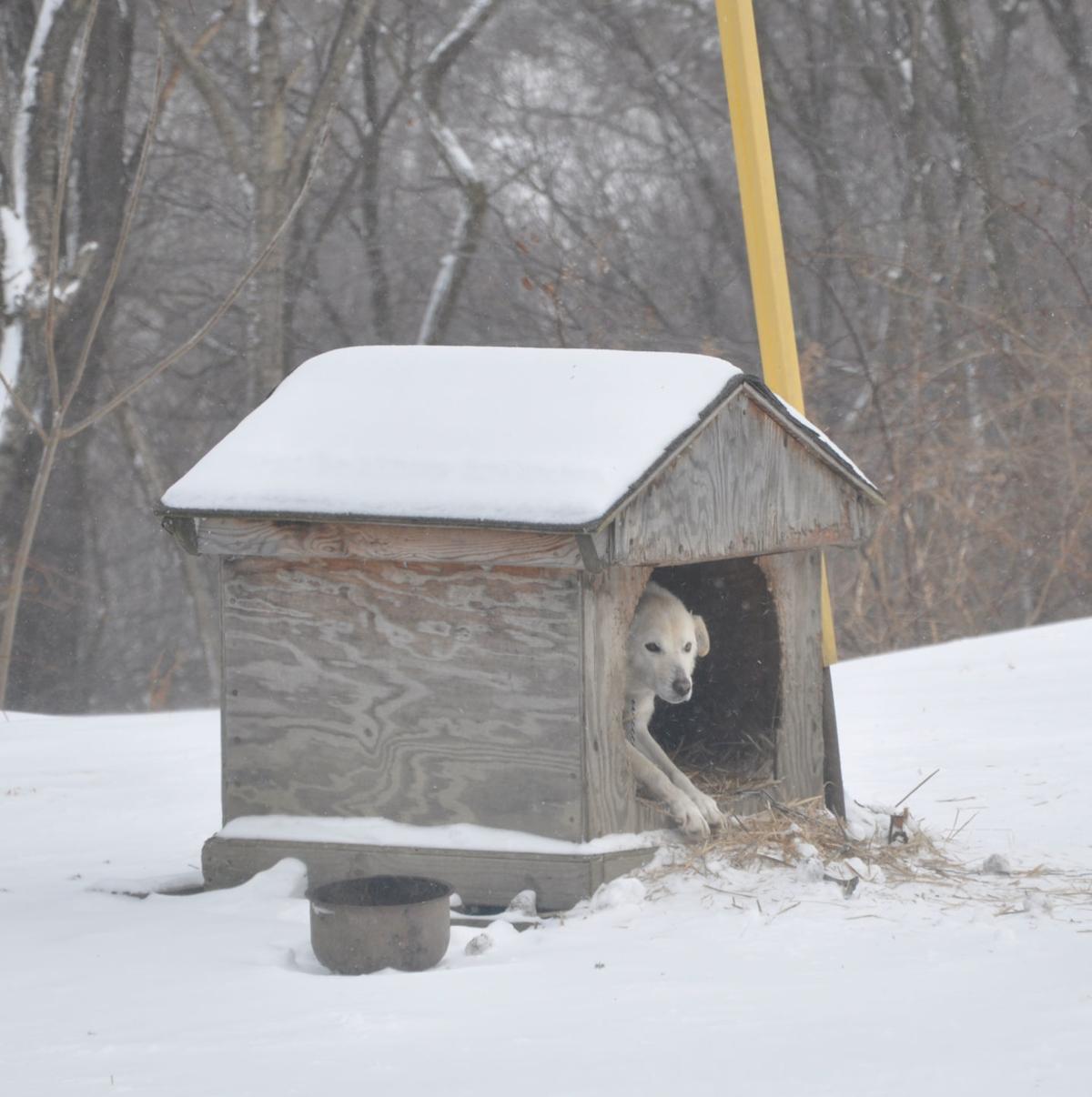 Sugar endures a cold Pennsylvania winter outside before being surrendered to Dogs Deserve Better. 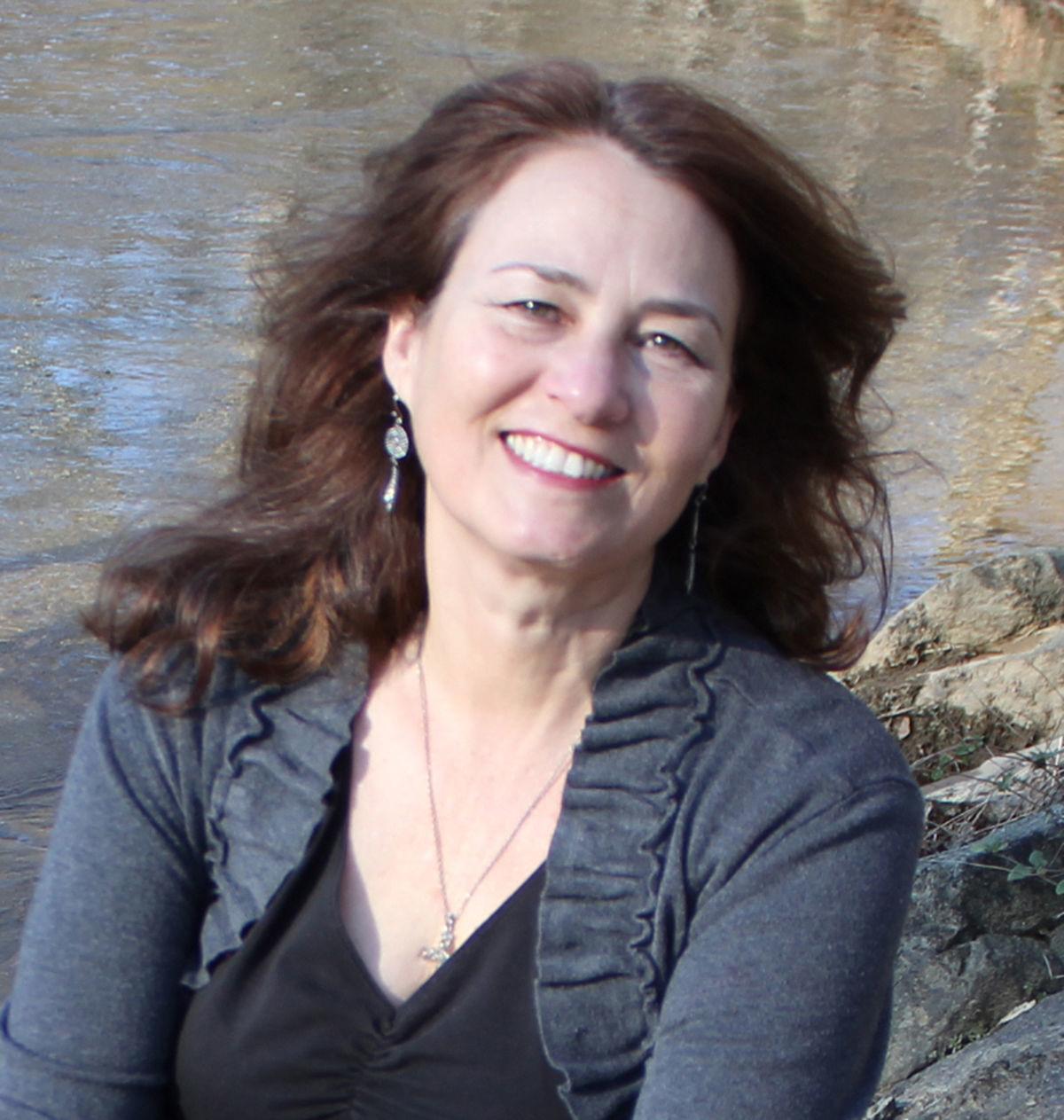 Baylee, one of many dogs rescued by Tami Thayne’s Dogs Deserve Better.

This new book by Amissville author Tamira Thayne is availalbe on Amazon and for Kindle.

The dogfighting sheds behind the main house formerly owned by former NFL quarterback Michael Vick. Local animal activist and author Tamira Thayne turned the place into a rescue for dogs.

A pull down ladder leads to the dogfight arena in a shed on the property formerly owned by Michael Vick. Dogs were carried or shoved up.

One of many dogs enjoying freedom for the first time at Dogs Deserve Better in Smithfield, established on the former property used by Michael Vick for dogfighting.

Sugar endures a cold Pennsylvania winter outside before being surrendered to Dogs Deserve Better.

A local author recounts the gripping true story of her struggle to transform an infamous animal abuse site into a place for love and healing in her new book, “It Went to the Dogs: How Michael Vick’s Dogfighting Compound Became a Haven for Rescue Pups.”

Amissville resident and Air Force vet Tamira Thayne, founder of Who Chains You Publishing, spent more than a dozen years of her life at the helm of the anti-chaining nonprofit and rescue she founded in her Pennsylvania home in 2002, Dogs Deserve Better.

An advocate and activist who has dedicated immense time and resources to speaking out for chained up dogs, Thayne originally took on the cause because of what she saw in her own backyard.

“I’d been unfortunate enough to buy a home only quarter-mile from an old black lab named Worthless, who’d spent all of his 10-plus years on a chain,” she writes in the new book. “As I drove by his house each day—a reluctant witness to his suffering—I would mutter and swear to myself … dogs deserve so much better than this.”

In ensuing years, Thayne pioneered the anti-tethering movement in America, spending 878 hours chained to a doghouse in front of state capitol buildings nationwide, going on hunger strikes and raising her voice whenever she could against animal cruelty.

It was in 2011 that she came up with an unlikely idea—she was going to purchase the former home of former Virginia Tech and NFL quarterback Michael Vick in Surry County and turn it into a dog rescue. It was the very home where dogfighting occurred as part of Vick’s Bad Newz Kennels.

Former Dogs Deserve Better treasurer Deborah Carr recounted the conversation with Thayne in the book’s foreword: “She told me flat out, ‘I’m going to move (Dogs Deserve Better) to Bad Newz Kennels and change it to Good Newz. I say we rehabilitate formerly chained dogs in Vick’s house and change the energy of that space. What do you think?’ … Then I watched her do it.”

Thayne detailed arriving on site that first day to check out the location.

“Tall trees and black paint served to camouflage the four cheaply made—and quickly erected—sheds huddled within their branches. It was in these sheds that the most nefarious activities took place. While the majority of the dogs lived chained and scattered through the woodland acreage in the back, those selected to perform were brought to the sheds for training, forcible breeding and—the ultimate goal of the compound—dog fights. Those that failed to perform were killed.”

In a new ESPN documentary about Vick, the Tech football star talked about the dogfighting and his subsequent conviction and imprisonment for it. In the documentary, Vick said he was exposed to dogfighting at young age, according to the Roanoke Times.

“We would see the older guys dogfighting. Cops would roll past (and not stop it),” he said. “The feeling of, ‘Was it right or wrong?’ never really existed … because I [had] seen it so much,” Vick said in the documentary.

Thayne, meanwhile, had seen enough of dogs being chained. She rallied supporters of her nonprofit to raise enough money to purchase the former dogfighting property. Thayne believed, and still believes today, that giving the property back to dogs was what they deserved.

The proposition was never easy, however, she said. She documented encounter after encounter with local government officials and others in Surry County less than pleased with the arrival of Dogs Deserve Better. Thayne faced down allegations of racism, community harassment, poisoning and false charges of animal abuse. A 2012 letter from the state veterinarian, included in the book, reported conditions at the facility met all applicable laws and requirements, granting its approval to operate as a rescue.

She moved her life to Smithfield and began implementing her vision of establishing a dog rescue. Thayne kept the dogfighting sheds in place as a historic reminder of the property’s past—“The windows were painted black and dog scratches etched the walls,” she wrote. “If there is indeed a hell, I hope this is one of the rooms dogfighters end up in, forced to fight for their lives day in and day out.”

Dogs Deserve Better kept saving chained dogs, garnering support and donations and the place became the haven Thayne had envisioned in spite of continued local pushback. “It Went to the Dogs” contains numerous images documenting harassment, defamation attempts and the chain of events that got the activist arrested and landed her in a courtroom, fighting to maintain her own freedom.

Meanwhile, hundreds of chained dogs were nursed back to health and adopted out to loving homes. There were bright moments along the way, Thayne agreed, like when a local Girl Scout troop visited the rescue on their first Christmas, laden with toys, supplies and food for the pups.

“All the rescue dogs at Good Newz Rehab Center have their own tiny stockings hung by the chimney with care … Don’t tell them but there are 20 boxes of gifts just waiting for them tomorrow morning. We can’t wait to see how excited they will be!” she writes in the book.

Thayne recalled story after story of dog owners voluntarily surrendering their animals, including a family with a new baby. Their two dogs were put outside, one of them injuring itself trying to escape from a pen, Thayne writes in the chapter, “She Called us, Crying About Her Dogs.”

“With tears in her eyes, but knowing it was the right thing to do, she signed over ownership of her dogs … Nala would forever after suffer extreme anxiety during thunderstorms, but she and Baylee quickly remembered their housetraining and inside manners, and soon were off into the brighter futures they deserved.”

In Chapter 62, “I Finally Break Down,” an exhausted Thayne recalled a conversation with her husband in late 2014 about moving on from Dogs Deserve Better. By this time, she had established a residence in a peaceful spot in the woods in Culpeper County.

“I have to leave DBB. I have nothing left to give. It’s all gone. I’m 100 percent depleted and I’m afraid if I don’t get out, there will be nothing left of me to save … Looking back, I can see now that I’d reached the end of my ability to deal with the PTSD I was suffering without help. Every time I would drive to the center, my stomach clenched into knots for the whole three-hour trip.”

Thayne ultimately sued Surry County for the false animal cruelty charges, which were dropped, and the matter was settled out of court with her organization receiving monetary recompense. She left the rescue on Vick’s former estate in good hands and it continues to operate to this day. In her official announcement that she was stepping down, Thayne remained true to the animals for which she fought.

“To the dogs who are still living chained and alone, I am sorry I was not able to save you all. God knows I tried. I pledge to you that Dogs Deserve Better will continue to fight for your rights and there’s a good chance I am not done fighting for you either.”

‘I could have done it better’

These days, Thayne remains at the helm of Who Chains You Publishing, founded 2016 from her Culpeper home, distributing books by and for animal activists and rescuers. She is also the author of the Chained Gods and Animal Protectors series and other titles. She lives with her husband, daughter, dog and cats.

Asked by the Star-Exponent if she would do it all again—buy Vick’s house and turn into an animal rescue—Thayne said she has given that question a lot of thought.

“I still believe the action of purchasing a piece of property known only for abuse and turning it around to just the opposite—a haven, a happy place for formerly neglected dogs—sends an important message about what we as a society should tolerate, and the direction we need to be going with our companion animals,” she said. “I’d like to think I could and would have done it better had I understood more,” she said of her time in Surry County.

Chained dogs are better off now than when she started her work nearly 20 years ago. Like any animal activist, Thayne said much work remains to be done.

“Through the collective work of so many caring organizations and individuals, hundreds of thousands of dogs have been saved from the cruelty of life on a chain,” she said. “Yet I guarantee there are still counties in Virginia I could visit today where I would leave doubting that we’d ever made a dent.”

When Thayne started her work in 2002, no one was talking about chained dogs, she said. Now, there are more than 300 towns and counties nationwide—including Culpeper—that prohibit or limit chaining.

“Dog chaining was an issue whose time had come by the early 2000s,” Thayne said, adding, “It is an archaic means of containing a dog that doesn’t address the emotional and physical needs of man’s best friend.”

“It Went to the Dogs,” with its more than 200 photos and document images, is available on Amazon and Kindle. Autographed copies may be found at whochainsyou.com.