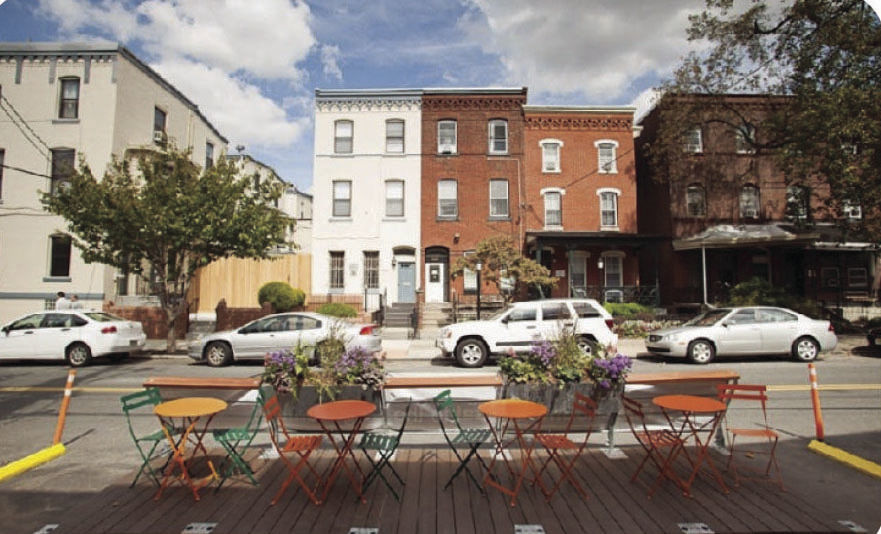 An example of a parklet along King Street in Alexandria. Culpeper plans to create five of the mini plazas downtown. 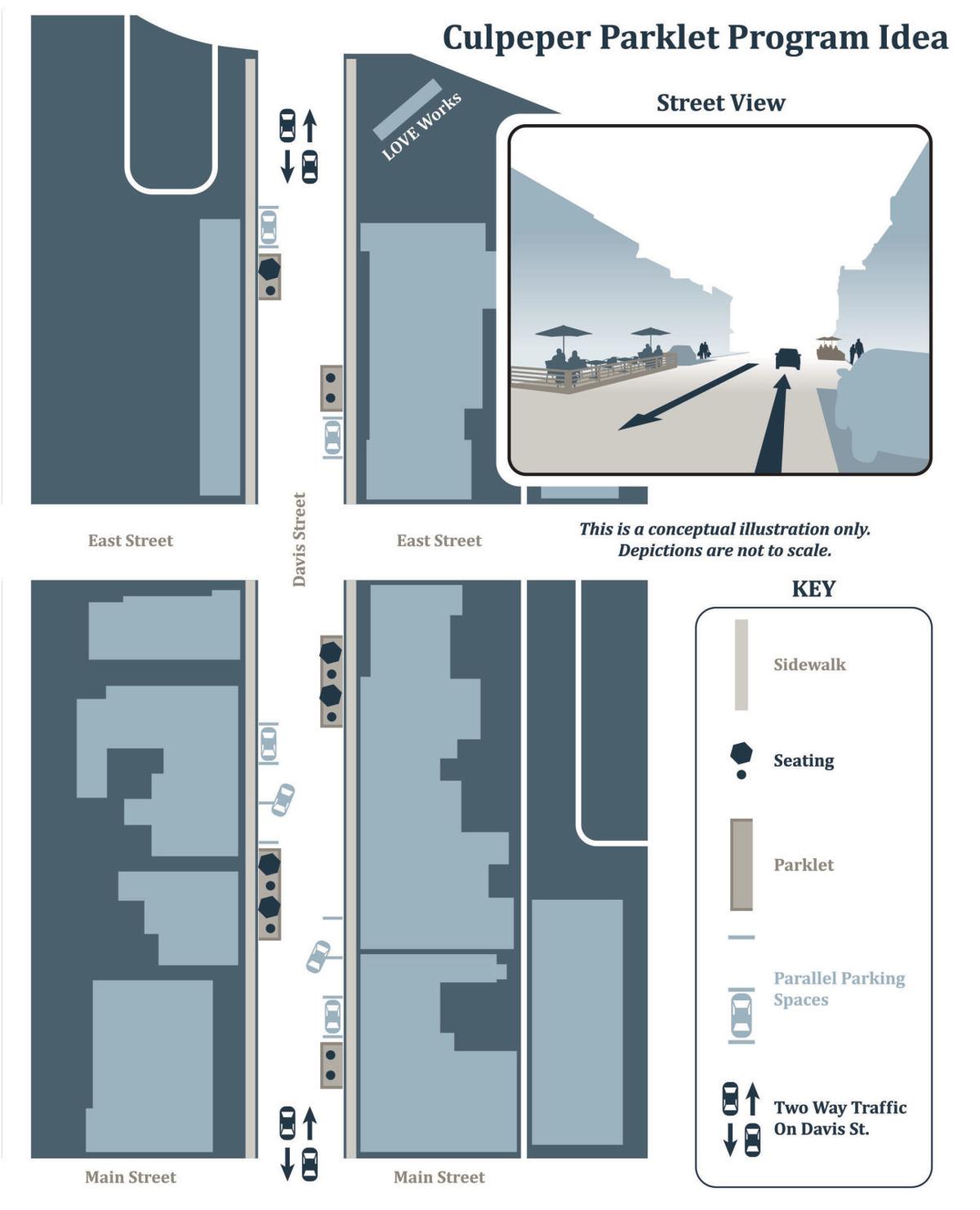 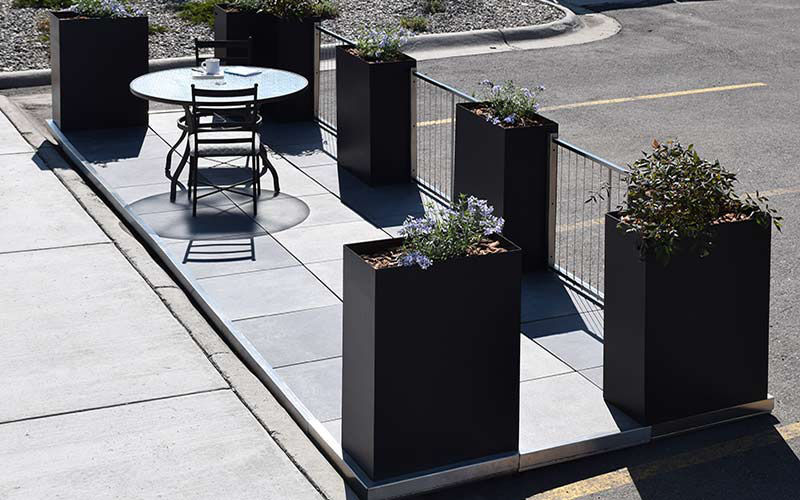 Example of a parklet made by Archatrak Inc. The town of Culpeper has ordered five of the mini plazas from the Maryland company for placement on downtown parking spaces.

An example of a parklet along King Street in Alexandria. Culpeper plans to create five of the mini plazas downtown.

Example of a parklet made by Archatrak Inc. The town of Culpeper has ordered five of the mini plazas from the Maryland company for placement on downtown parking spaces.

As local restaurants and businesses continue to evolve and slowly expand services in an era of social distancing, the town of Culpeper hopes to bring a front porch feel to its streets.

To do that, Town Council recently approved the purchase of five “parklets”—which extend the sidewalk by converting on-street parking spaces into mini public plazas. The initiative, which will be offered for free to town merchants, coincides with the recent easing of restrictions to allow outdoor dining.

Town Manager Chris Hively explained the concept used elsewhere: “Take a parking space and put a raised platform at curbside level on it with a railing and some tables and chairs for restaurants to use.”

The town governing body last week approved an initial purchase of five pre-manufactured, turnkey parklets at a cost of $61,500 and up to $94,000 for more, depending on requests and interest from merchants. They are on order from Maryland-based Archatrak Inc. and expected to arrive in about a month, pending normal delivery.

The town has applied for a $10,000 grant through the Grills Fund for Main Street Revitalization to help cover the cost as part of local funding being offered for creative approaches in the face of COVID-19. The small public parks are relatively mobile, taking around four hours to assemble.

Initial installation will take about a week and require construction of a flexible curb and delineator system along the parameter of each parking space.

Hively said the extra outdoor public space for eating or lounging is intended to help downtown businesses amid ongoing restrictions limiting interior occupancy and requiring distance among patrons to limit spread of the novel coronavirus.

Before the pandemic seriously curtailed retail and dining activity, parking was at a premium in downtown Culpeper, the town manager said.

According to Culpeper Tourism Director Paige Read, parklets are used in other Virginia communities such as Alexandria and Norfolk, and have been shown to increase economic activity when placed in front of cafes and restaurants. This is because the contained, attractive space increases foot traffic and encourages people to stay longer. They also slow traffic and increase “eyes on the street.”

“We do not have details on how and when social and economic activity will return,” Read said in a report to town council. “We do however anticipate a phased approach, where people will be required to respect safe social distancing. Parklets will aid in these efforts by providing additional space for people to safely engage with the shops and restaurants in downtown Culpeper.”

She said at a recent meeting the mini parks could help citizens and customers feel safe returning to downtown following prolonged closures due to the virus. She envisioned glass-blowing demonstrations or live performances happening within the tiny parameters.

“The majority of businesses are very much on board with this project and would like to see it for long-term use,” she said.

“With our reduced budget, I don’t know we are the position to spend this kind of money when we have the opportunity to create these ourselves,” he said.

Hively said it would take staff longer to create the mini plazas than the time it will take for them to arrive unless workers are diverted from core services. He said garbage pickup is running at 120 percent normal capacity and that mowing season is starting.

“We don’t have staff just sitting around that could do this,” Hively said.

Councilman Keith Price supported the parklet concept, saying adjoining businesses could “take some ownership of it” by helping to clean and sanitize the parklets after use.

“This is forward thinking and a great idea for the town,” he said of the parklet program.

Councilman Keith Brown echoed the remarks, saying the mobile mini parks could be used well into the future. He said the return on investment would be long-term.

As of now, a concept plan calls for the parklets to be placed on East Davis Street.

Brown asked how the program could be broadened.

Read said that was a fair concern.

“We see this as an extended footprint of historic downtown, not just Davis Street,” she said.

Visiting friends and family is a top driver of tourism, Read said, with typically three to four stops made for shopping and dining during such visits.

The town manager will develop, implement and manage the parklet program to maximize their use in fostering economic development and growth during this pandemic-initiated economic downturn.