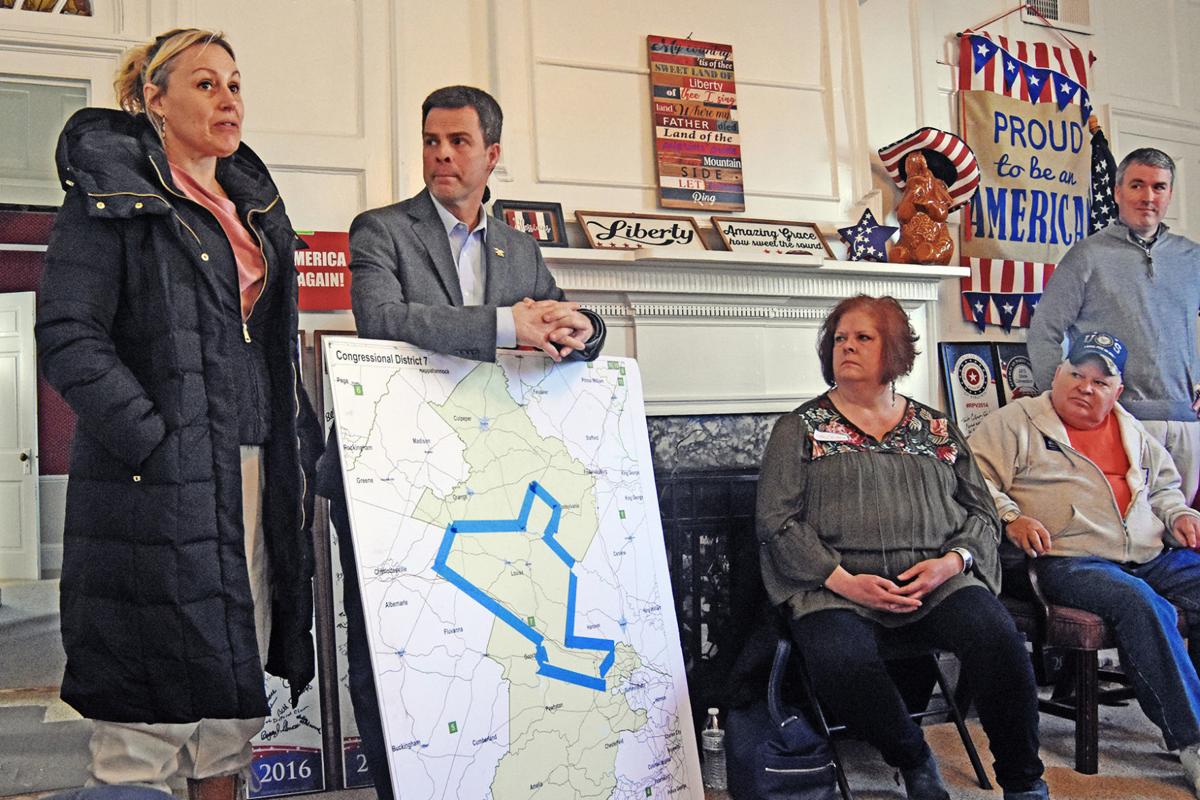 Del. John McGuire and his wife Tracy (left) meet with Republicans during a weekend visit to Culpeper. He is seeking the GOP nomination for the 7th District congressional seat. 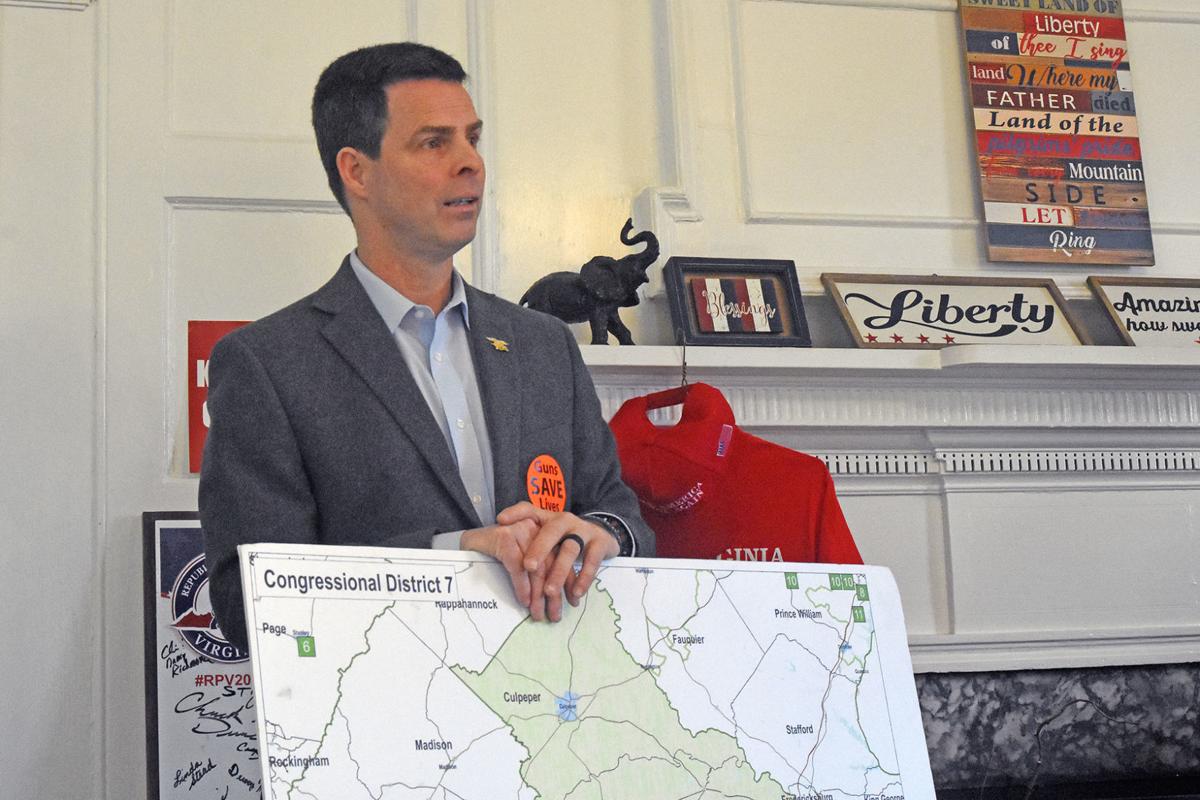 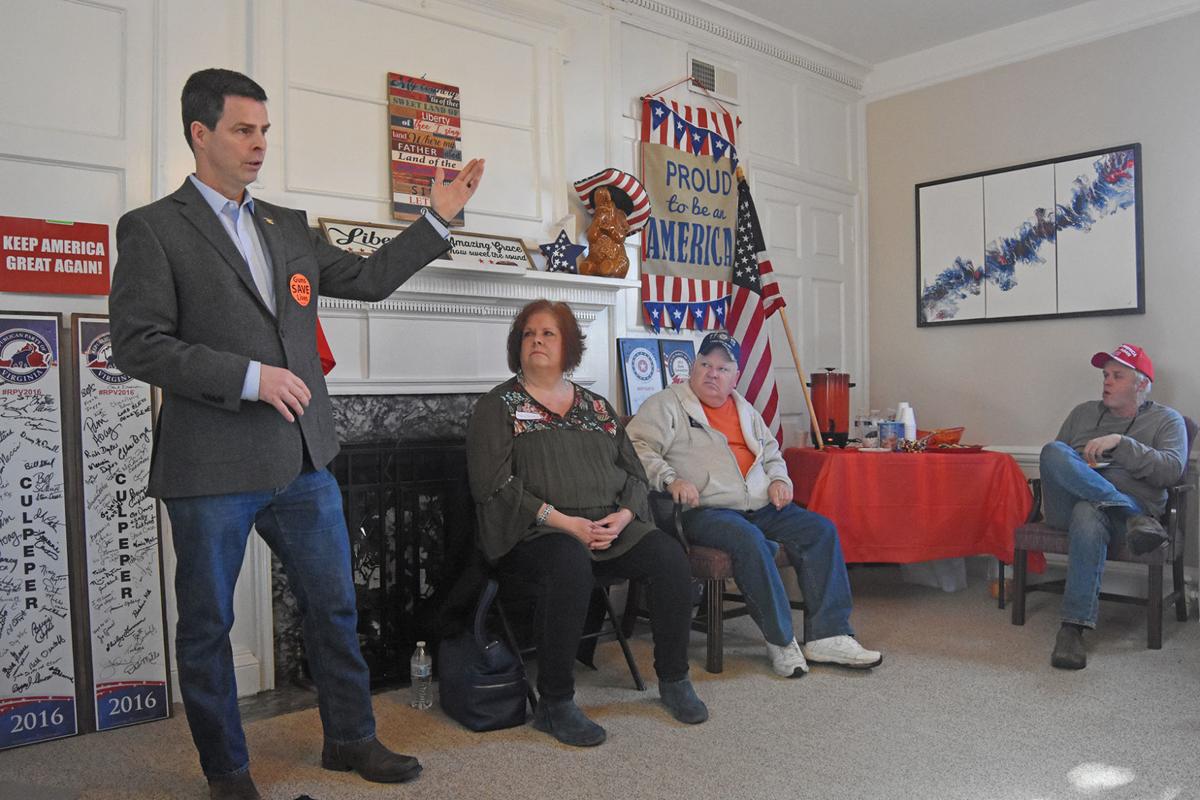 McGuire tells Republicans in Culpeper that the party needs to go on the offensive to regain the 7th District congressional seat.

Del. John McGuire and his wife Tracy (left) meet with Republicans during a weekend visit to Culpeper. He is seeking the GOP nomination for the 7th District congressional seat.

McGuire tells Republicans in Culpeper that the party needs to go on the offensive to regain the 7th District congressional seat.

In an effort to become better acquainted with this portion of the 7th District, Republican congressional candidate John McGuire held a meet and greet session in Culpeper Saturday afternoon.

McGuire, who is serving his second term representing the 56th District in the Virginia House of Delegates, met local Republicans and their guests during a two-hour visit to the Culpeper County GOP Committee headquarters on South Main Street.

McGuire’s wife, Tracy, accompanied him during the visit. The couple has a family farm in Goochland County.

“I’m so proud of him,” Tracy McGuire told the crowd of about 25 people gathered at the GOP office. “He’s been tested and tried, and he’s true blue.”

A former Navy SEAL and a business owner, McGuire is one of seven candidates seeking the Republican nomination this year to run for the 7th Congressional District seat currently held by first-term Democrat Abigail Spanberger.

Republicans are slated to hold a convention in Richmond April 25 to determine who will run against Spanberger in November.

“I’m doing this in all 10 counties in the district,” McGuire said after his presentation in Culpeper. “We have seven great candidates in the race, but I think that I’m the best candidate.”

McGuire said he was elected to the 56th District seat in 2017 and 2019—both years in which the Virginia Republican Party lost ground to Democrats—despite having no previous experience in state politics.

“My whole life has been about leadership and teamwork,” McGuire said. “Nothing great has ever been done alone. I’ve been fighting my whole life.”

McGuire said he spent part of his childhood in Virginia’s foster care system, and later served 10 years in the Navy. In October 2006, he broke his neck in a trampoline accident, an injury surgeons believed he would not survive.

“It took me about a year before I could walk somewhat right again,” he said.

McGuire, who said he puts God first in all things, told the local Republicans that whenever he falls down, he always gets right back up.

“My nickname in the General Assembly is Pitbull,” he said.

McGuire said he won a six-way primary for his seat in 2017 despite having no political experience and no endorsements from local leaders, a situation that changed quite a bit when he ran for reelection in 2019.

“It was a lot of volunteers, a lot of door-knocking and a lot of hours,” he said. “All that matters is getting things done; I don’t want to be a bump on a log.”

McGuire said his tenacity allowed him to sponsor several successful bills, including changes to funeral home policies in the state and milk price reductions for rural Virginia.

McGuire said his state district is “smack dab in the middle” of the 7th Congressional District, which puts him in a great position to challenge the Democratic incumbent for the seat this year.

McGuire questioned Spanberger’s claim to be a moderate Democrat, and said he plans to fight efforts to raise taxes, open the nation’s borders and to create government-run health care if elected to Congress.

McGuire said he is sick of politicians making promises to get elected, and then not following through once they get to the nation’s capital.

“We have been retreating as a party,” he said. “We have got to go on the offense.