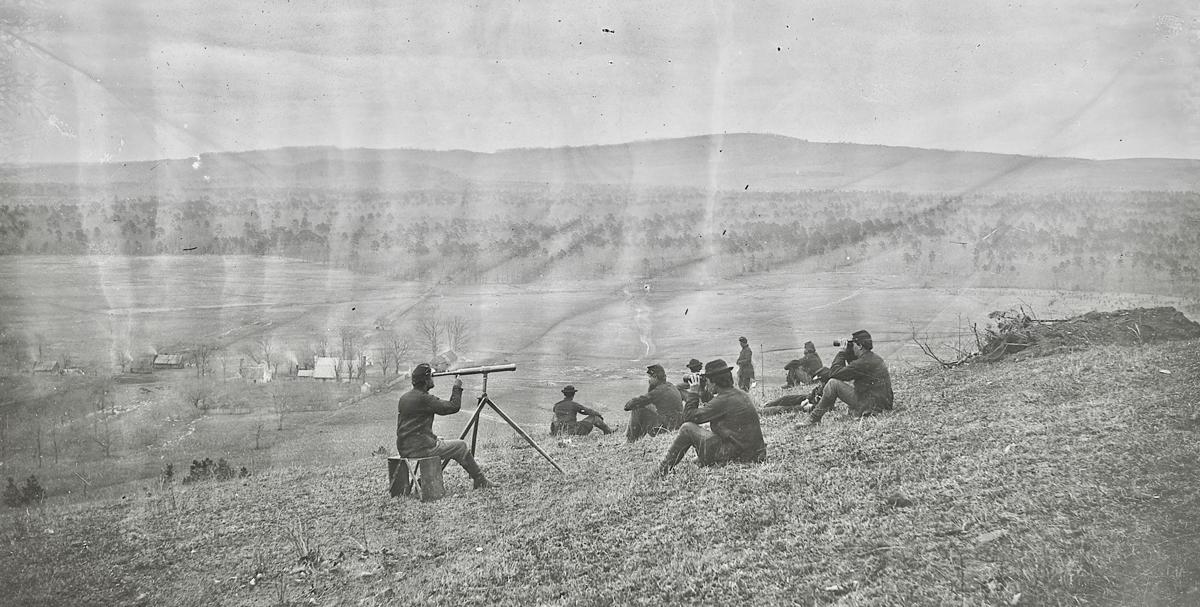 Federal signalmen scrutinize Confederate positions south of the Rapidan River from Cedar Mountain’s eastern slope in March 1864. William Yeager’s farm is below them. Clark’s Mountain, the area’s highest prominence and Gen. Robert E. Lee’s signal station, is on the horizon. 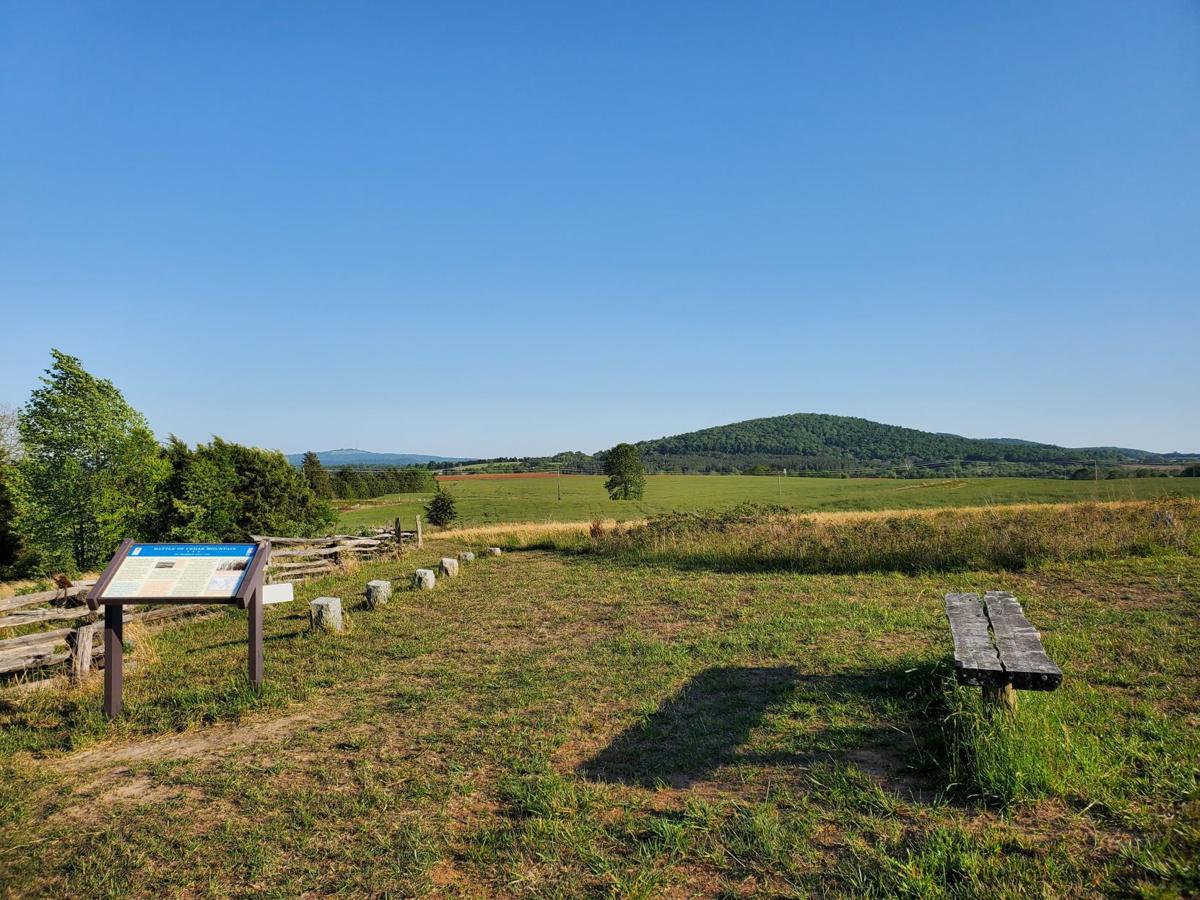 Friends of Cedar Mountain Battlefield preserves and maintains this portion of the 1862 Civil War battlefield in southern Culpeper County. An interpretive trail, with wayside markers, winds around the site's fields and woods. Cedar Mountain is in the distance.

Federal signalmen scrutinize Confederate positions south of the Rapidan River from Cedar Mountain’s eastern slope in March 1864. William Yeager’s farm is below them. Clark’s Mountain, the area’s highest prominence and Gen. Robert E. Lee’s signal station, is on the horizon.

Friends of Cedar Mountain Battlefield preserves and maintains this portion of the 1862 Civil War battlefield in southern Culpeper County. An interpretive trail, with wayside markers, winds around the site's fields and woods. Cedar Mountain is in the distance.

The U.S. Department of the Interior is funding a study of Culpeper County’s “Rapidan Front” area of Civil War battlefields and historic sites.

The Friends of Cedar Mountain Battlefield, a local nonprofit group, will receive $86,740 to research Culpeper’s Racoon Ford, Morton’s Ford and Sommerville Ford battlefields, sites that were fought over in 1863 and 1864 during the American Civil War.

The three battlefields and related historic sites, lie along the Rapidan River, which separated the Confederate and Union armies during that period.

“Battlefields such as Gettysburg are sacred sites where Americans gave the last full measure of devotion,” Bernhardt said. “These grants enable us to partner with communities and organizations to preserve these places and connect visitors with their historical importance.”

“The Friends of Cedar Mountain Battlefield are thankful for the opportunity this grant award has given us,” Logan said Saturday. “We realize and appreciate the many layers of Culpeper’s rich Civil War history, and are excited at the prospect to explore, research and document events and historical sites that contribute to the full story of battle-torn Culpeper.”

Susan Ralston, president of Citizens for Responsible Solar, a Culpeper advocacy group, praised the local battlefield stewards, who have protected and maintained part of Culpeper County’s 1862 Cedar Mountain battlefield since 2004

“Citizens for Responsible Solar is so proud of the leadership the Friends of Cedar Mountain Battlefield is providing in the preservation efforts of these important sites in Culpeper County,” Ralston said. “Without their hard work, the rich history of Culpeper’s many battlefields and historic sites, which are not as well known or visited, could be lost to development that would destroy the rural and agricultural heritage we love.”

The Friends of Cedar Mountain Battlefield has asked Culpeper leaders to delay the county’s consideration of a 1,000-acre solar-energy plant near Stevensburg until it can finish its historical study of the area proposed for solar development.

The all-volunteer friends group asked Culpeper County Planning Commission and the county Board of Supervisors to halt the Greenwood solar project proposed by Florida-based NextEra Energy Resources, which bought it from Greenwood Energy of Texas.

The Greenwood solar project was approved just before midnight on Oct. 2, 2018. The Board of Supervisors voted 3-2 to grant a conditional-use permit for NextEra to build and operate its utility-scale solar project.

But development of the Greenwood plant “would create an integrity hole in the center” of the friends’ study area that could jeopardize other sites from being recognized as nationally significant, the group said in a letter to the supervisors and planning commissioners.

The Cedar Mountain friends’ study will continue research begun in 2016 to identify threats to the Culpeper area’s most important Civil War battlefields and cultural and agricultural landscapes.

For much of the Civil War, the Rapidan River in southern Culpeper County was the geographical border that separated Union from Confederate territory, as controlled by the warring armies,

Heavy casualties took place along the river as both armies jockeyed for control of what Hall calls the “Rapidan Front.”

“This extraordinarily historic acreage—dotted today by several pristine antebellum mansions—is little-changed since the Civil War and richly deserves full preservation protection,” he said. “This study proposes cultural landscape assessments that will increase protection for the nationally-significant Civil War cultural landscape along the Rapidan River Front, extending northward to vital 1863-64 Union winter encampment venues and the Cedar Mountain battlefield. This assessment is long overdue, and I will do everything I can to support this threshold initiative.”

The National Park Service’s American Battlefield Protection Program, created by Congress in 1990, aims to save the country’s most important Civil War, Revolutionary War and War of 1812 battlefields.

Since 2017, the Trump administration has provided $47.8 million in ABPP grants, helping states and localities acquire, preserve and share the history of America’s battlefields. Federal revenue from oil and gas extraction on the Outer Continental Shelf provides the lion’s share of deposits into the Land Water Conservation Fund, the largest source of funding for ABPP grants.

The conservation fund supports tens of thousands of other state and local projects, including protection of water sources, expansion of access for hunting and fishing, and preservation of recreational areas.

President Donald Trump has called on Congress to permanently fund the LWCF and address a multi-billion-dollar backlog of maintenance projects in the national parks. Permanent funding would also support battlefield protection efforts, the Interior Department said.