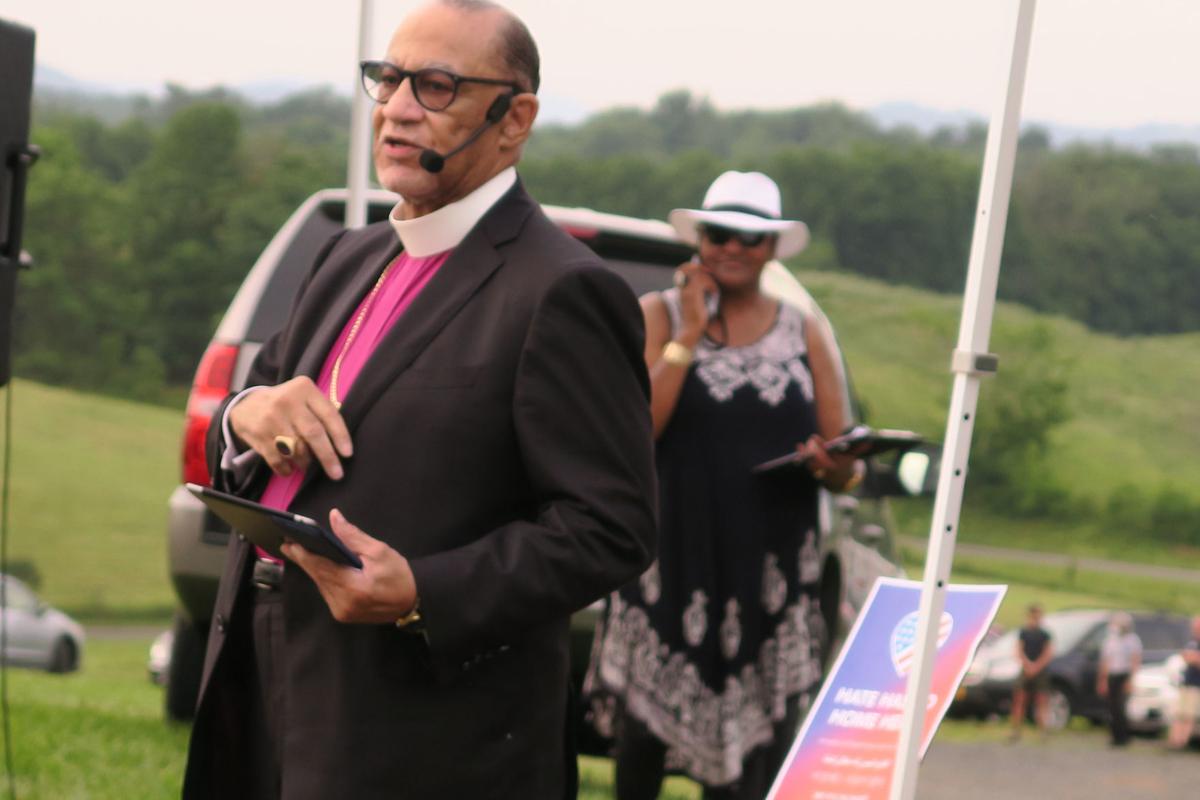 Bishop Carroll A. Baltimore Sr. speaks at Sunday’s Community Gathering in Woodville as organizer Nan Butler Roberts (at back) listens. 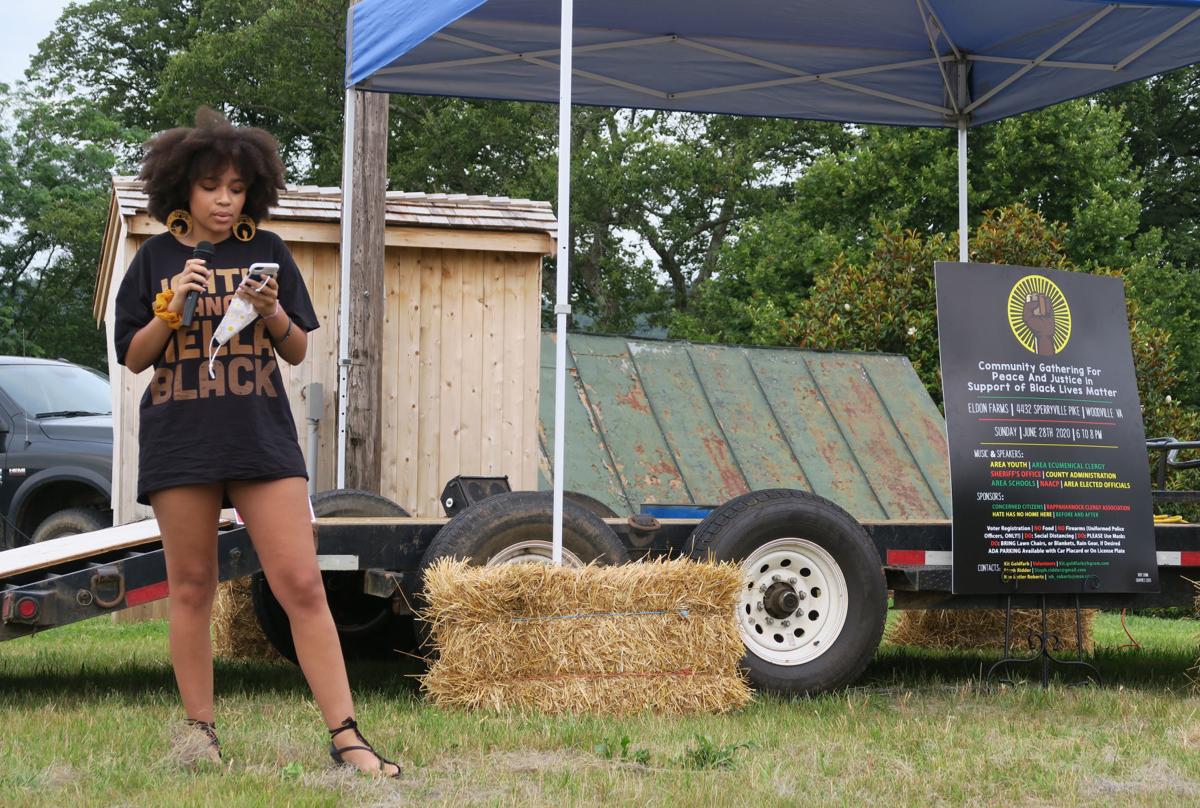 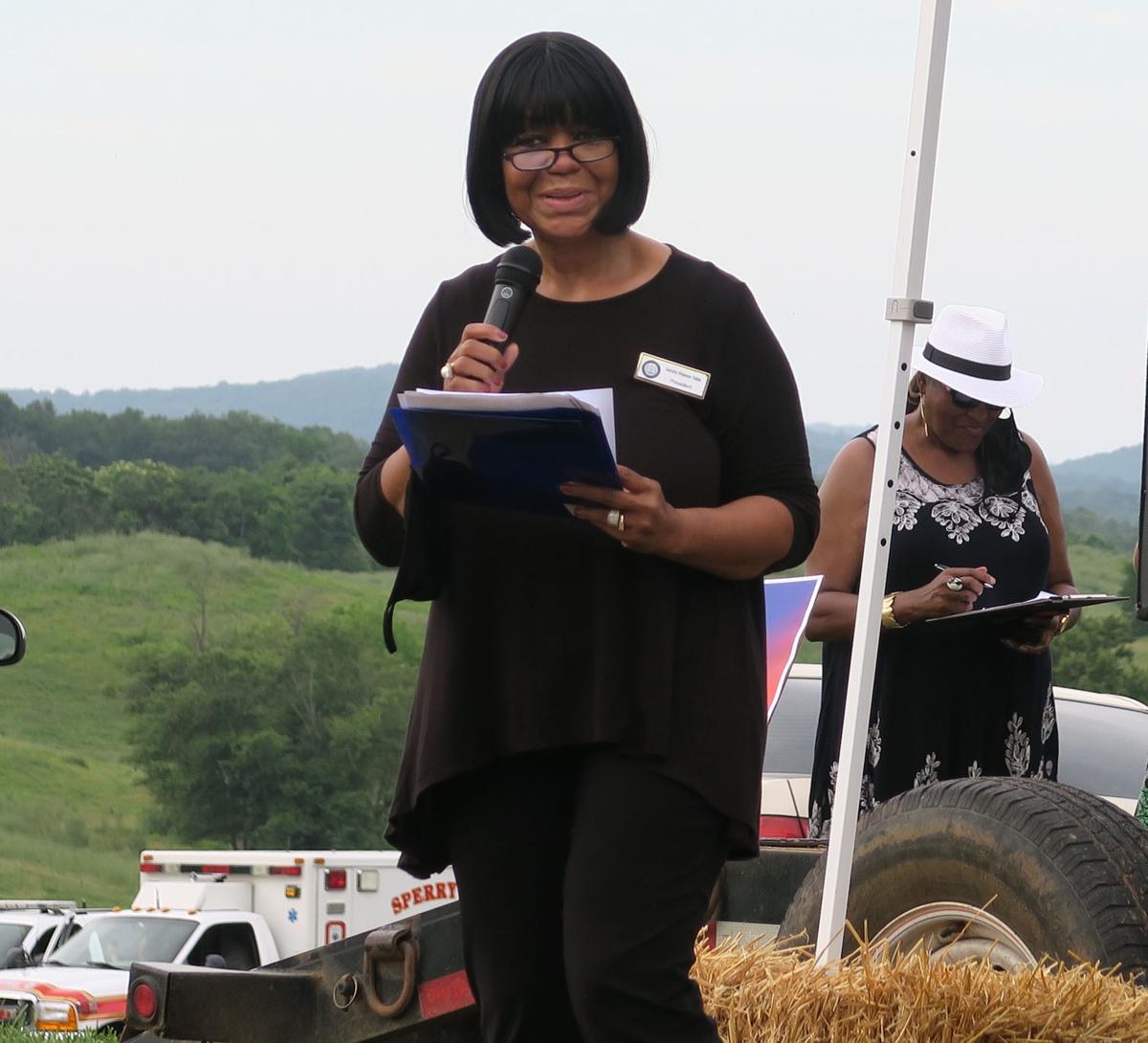 Sandra Reaves-Yates, president of the Culpeper Branch NAACP, was among the speakers on Sunday. 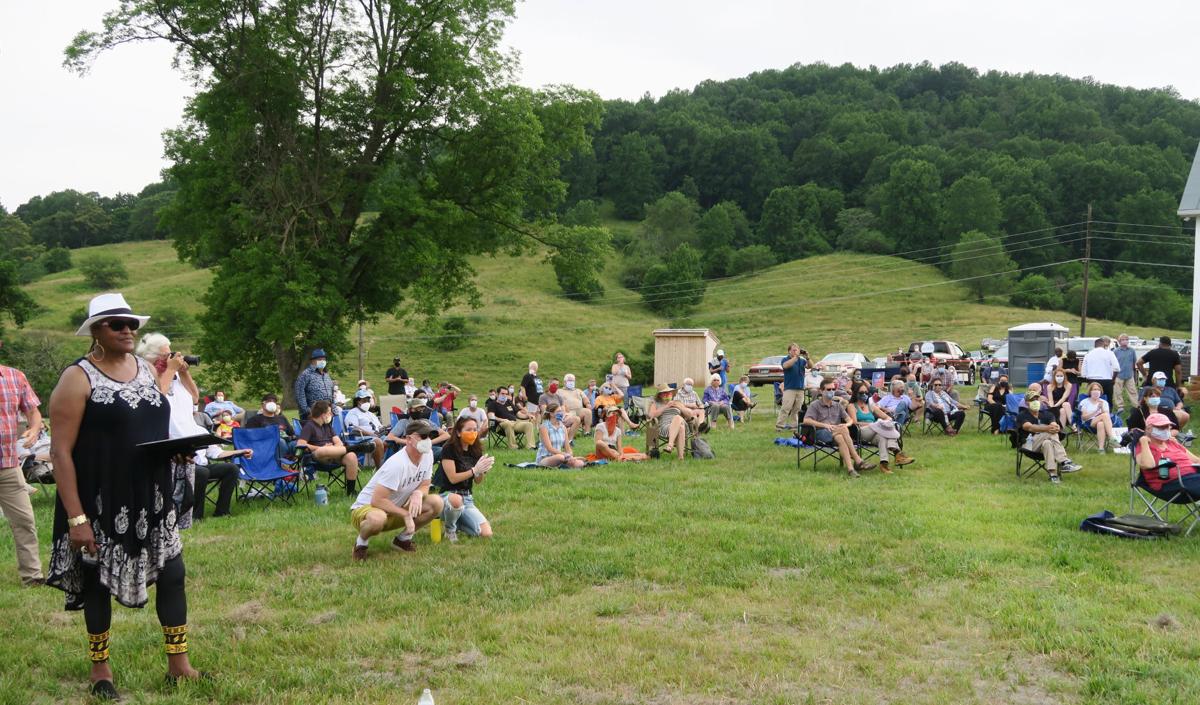 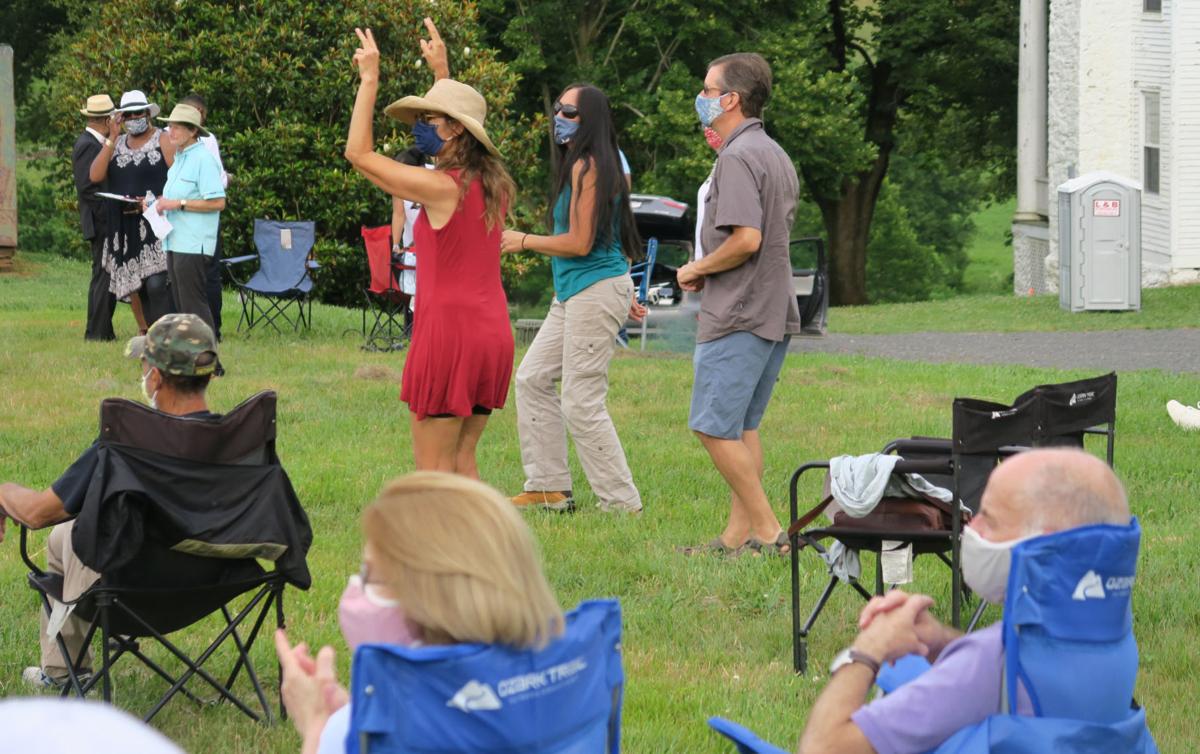 Some people dance to the music while at Sunday’s Community Gathering in Woodville. 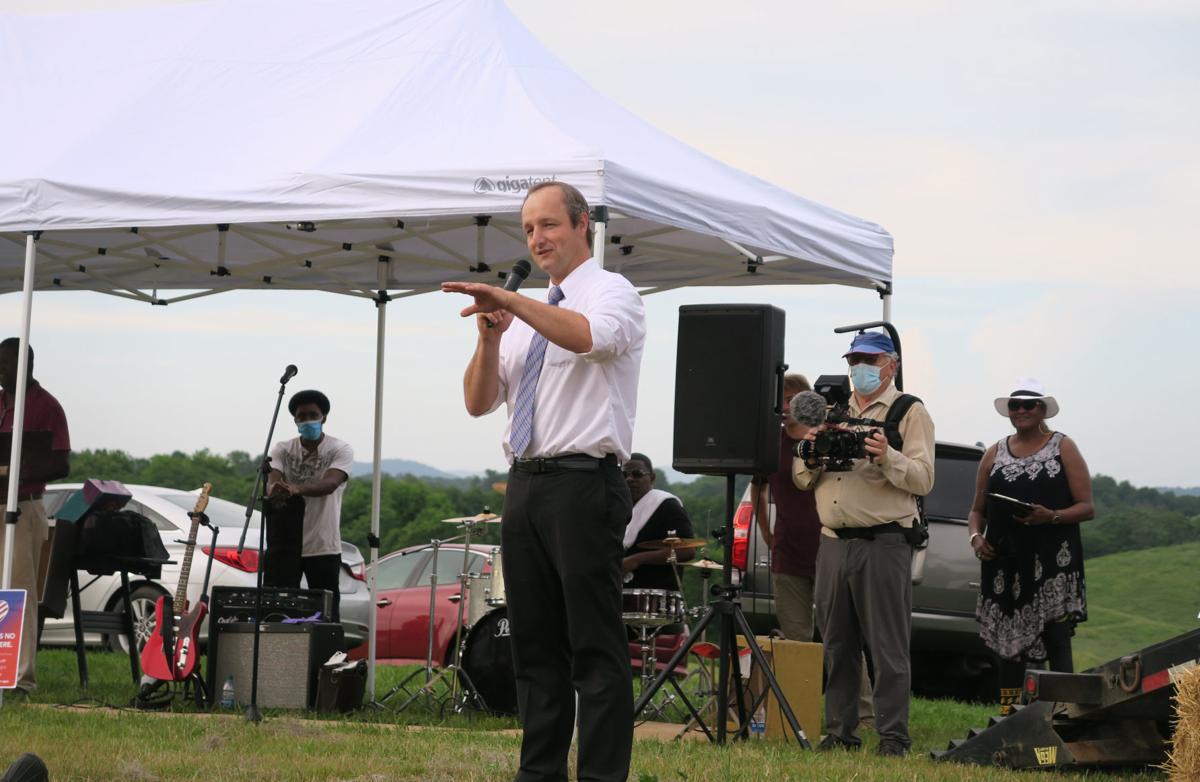 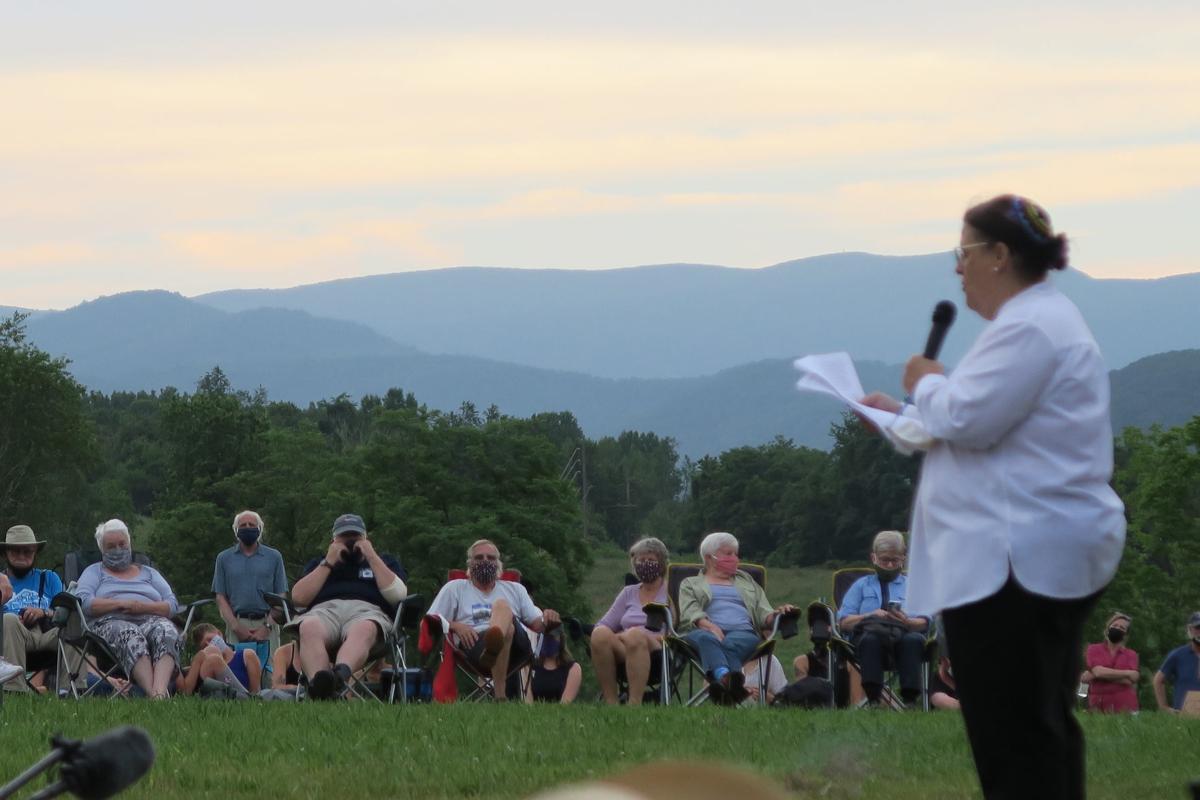 Rabbi Rose Jacobs talks about the history of Black World War II veterans during Sunday's program on a farm in Rappahannock County. 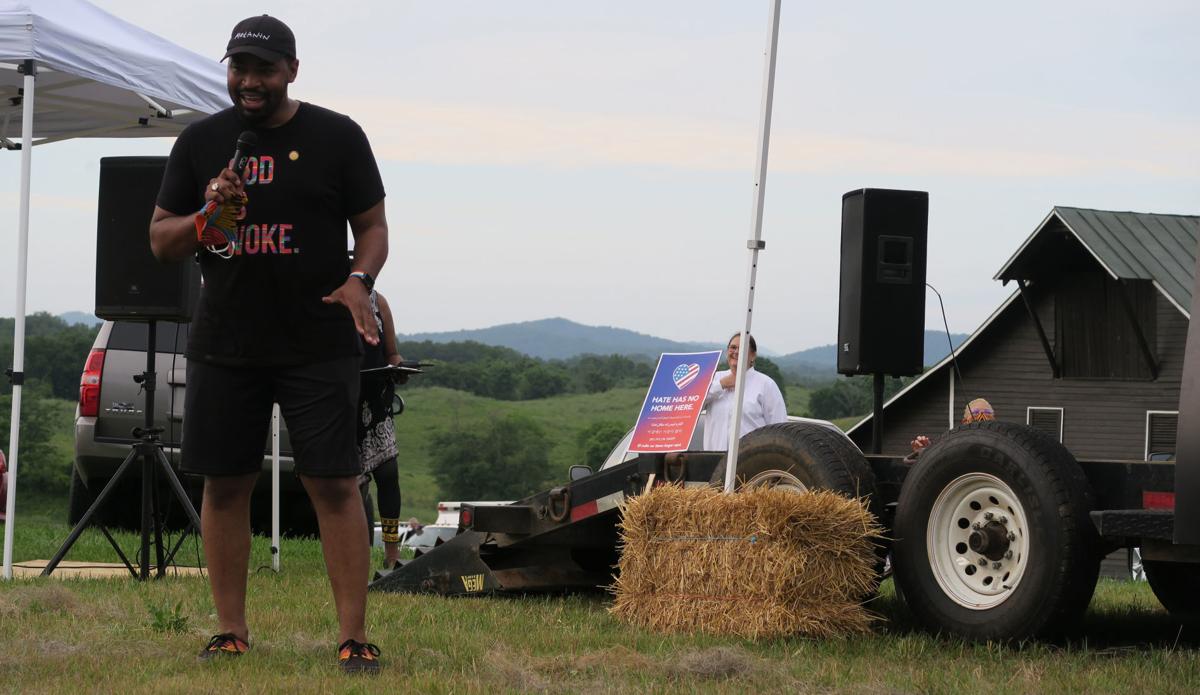 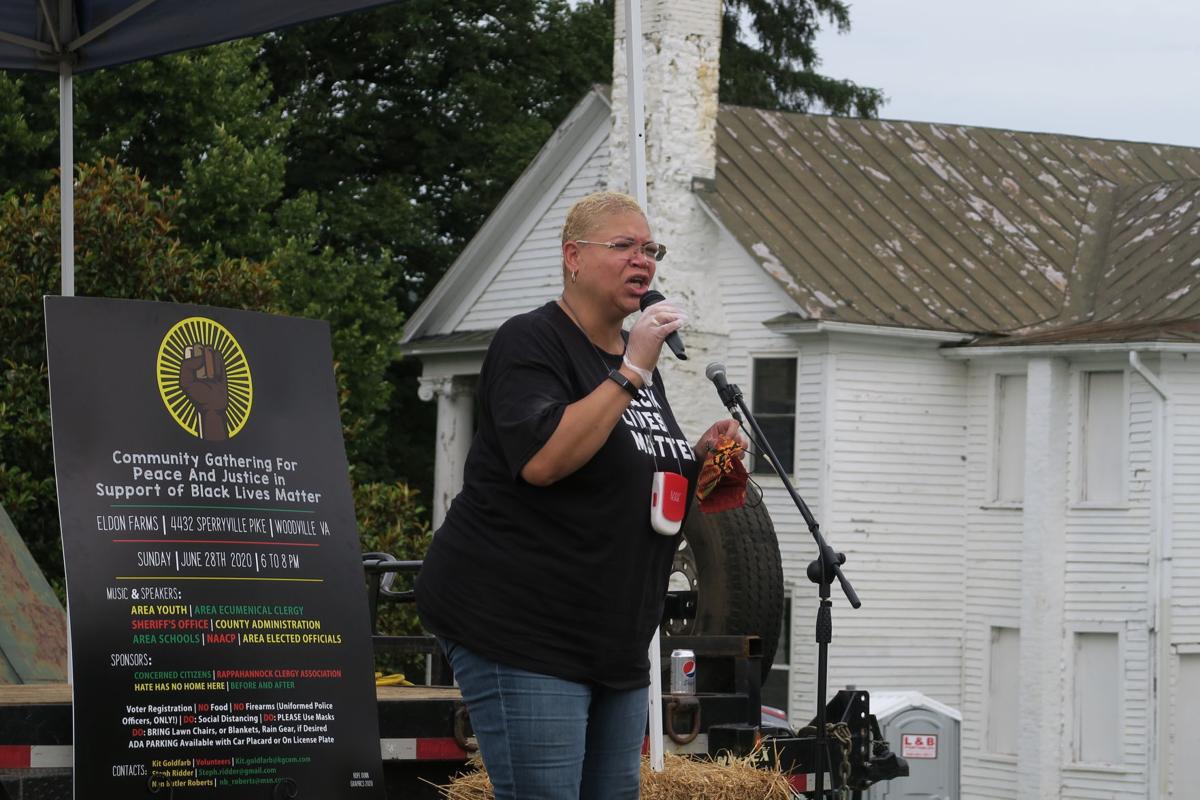 Bishop Carroll A. Baltimore Sr. speaks at Sunday’s Community Gathering in Woodville as organizer Nan Butler Roberts (at back) listens.

Sandra Reaves-Yates, president of the Culpeper Branch NAACP, was among the speakers on Sunday.

Some people dance to the music while at Sunday’s Community Gathering in Woodville.

Rabbi Rose Jacobs talks about the history of Black World War II veterans during Sunday's program on a farm in Rappahannock County.

WOODVILLE—Hundreds assembled on a hillside Sunday evening in Rappahannock County at the Community Gathering for Peace & Justice in support of the global civil rights movement, Black Lives Matter.

The air was muggy, and the mood calm, as masked attendees sat apart on the grass on blankets and in chairs overlooking a panoramic view of mountains like many layers of blue tissue paper.

Layered also was the program spanning information about the area’s long racial history, testimonies about racism, soulful music, religious presentations and the speaking of names of those killed by violence along with laughter and greetings as people sweated, danced and drank water.

Though the African-American community is small in her native Rappahannock, she added, “It’s good to know your community stands with you in these times of adversity and revolution. Not just a moment, but a movement.”

Roberts descends from the county’s enslaved people, she told the peaceful crowd during the two-hour outdoor assemblage at Eldon Farms. There was a lot of “chit chat and chatter” on social media about what was going to happening at the Community Gathering, she said.

“This is a community of peace,” Roberts chastised, noting the right to free assembly and speech. She mentioned another gathering around a Confederate monument in the nearby town of Washington by folks there concerned about protecting it. “Of course, there was no need, because destroying a monument was not our purpose,” she said on Monday.

Gehno freely shared his background of growing up white in Florida the descendant of Confederate soldiers: “I’m a registered Republican,” he said.

Gehno added, the issues of equality and brutality bringing together communities at this moment “is bigger than my personal history … is bigger than my politics … This is about being a child of God … My brothers and sisters, we should be able to stand up here and say, Black Lives Matter.”

There have been wrongs done, he said, but the important thing now is unity.

Rappahannock County School Board member Rachel Bynum got emotional as she spoke of violence against Black people “by those sworn to protect us all.” She spoke of the Monacan Indians who originally inhabited this portion of the Virginia Piedmont and the region’s enslaved people, “the engine of agriculture” for centuries.

She spoke of the enslaved people from Rappahannock and the area who joined the U.S. Colored Troops during the Civil War to fight for the Union: “There’s not a monument to them in our county, but perhaps we’ll make one in the future,” Bynum said to applause from around the hillside.

The school board member said the school population in Rappahannock is shrinking and that it needed to be “a welcoming county” to attract new families. Bynum said the public school system had worked to implement or considered restorative justice and trauma-informed practices. The system added a social worker recently and will be hiring a behavior interventionist in the fall, she said, as well as a full-time English Language learner teacher.

Belle Meade Montessori student Alyssa Amster scolded American adults for “acting like children” and said she tries to avoid politics, “meaningless drama in which anything meaningful drowns.” Justice is due for generations of transgressions, the student added, “But we can do it without the hate.”

Local gospel singer Marie Davis sang the Seal version of Sam Cook’s, “A Change is Gonna Come” before remarks from Unitarian Universalist Church Pastor Russ Savage who spoke of a country “at a tipping point” once again. The list of Black people killed by police is a long one, said the white minister.

“But also we are seeing people rising up to say, enough,” Savage said. Police are needed to keep the peace, investigate crimes, direct traffic and help with events like this, he added. Social workers, drug counselors, nurses and dispute resolution experts might be better suited for answering calls society now expects police to answer, Savage said.

“We must examine whether racism exists in our policing practices,” he said. “Every police officer must believe Black Lives Matter.”

Savage encouraged those in the audience to listen to the experiences of hurt for people of color, strive to understand and to speak up in the face of racist comments.

College student Tatayna Yates, a junior at Christopher Newport University, told of her experience being very involved during her years at Rappahannock County High School – as class president, cheerleader, yearbook editor, drama club and more. She also worked at 4H camps and as an intern in local schools.

Yates, who is Black, said she thought because she put so much into her high school she would get the same in return. There’s a racism problem in Rappahannock, she said, mentioning micro-aggression and “aggression, aggression” against people of color. Yates said she hoped Sunday’s Community Gathering was a step in the right direction toward making the county a place she would want to raise her children.

Warrenton Town Councilman Renard Carlos said the time to sit quiet on the sidelines of the fight for civil rights is over. The time for depending on others to do it is over, he said. It’s time to get on the front lines of the struggle, Carlos said: “It’s our responsibility.”

Sandra Reaves-Yates, chairman of the NAACP Branch representing Culpeper, Madison and Rappahannock, told the assemblage that the nation’s largest civil rights organization was built on a foundation of peace and pursuit of equality for all. Victories have been won, but the NAACP cannot rest on its laurels, she said.

Unconscionable act of violence continue against Black people in America, including by bad police, Reaves-Yates said, adding systemic racism is still implemented and expected in some communities. The killing of individuals such as Breona Taylor, a medic sleeping in her home, has “let the secret out of the closet,” Reaves-Yates said, “and the camera is still rolling.” She added, “As of today, all hands on deck.”

Del. Joshua Cole, who last year became the first Black person elected from Stafford County to represent the state’s 28th statehouse district, said he was excited to see what is happening in the fight for civil rights. He said, “The people closest to the pain need to be the people closest to the power,” in outlining the recently-unveiled platform of the Virginia Black Caucus.

“This is not about George Floyd,” he said of the Minneapolis man who died on Memorial Day on the street with a policeman’s foot on his neck. “This is the culmination of the frustration of a people with years of inequities.”

Culpeper Baptist Church Music Director Alex Smith sang, “Make Them Hear You,” a song “that speaks about justice and keep showing up and speaking out until we are heard.”

Rabbi Rose Jacobs, of Madison County, shared about the history of Black World War II veterans and all they were denied when they returned home – access to college through the G.I. Bill, decent, middle-class housing and good jobs.

“African-Americans could not take advantage of the pull up by your bootstraps myth that persists to this day,” she said. “Housing restrictions kept them out of new housing springing up across America. Though entitled to government loans, no one would sell to them! And those African-American soldiers who had become skilled workers in the military found … only unskilled, poorly paid, jobs.”

The U.S, government invested billions in its returning soldiers, but not the Black soldiers, Jacobs said: “Perhaps those are the reparations that we should make to the African-American community. To make available to this generation the benefits of college and trade school tuition, affordable home ownership assistance, and a leg up in employment and business would be a fitting tribute to those who served.”

Renowned educator, missionary, humanitarian and 55-year preacher Bishop Carroll A. Baltimore Sr. ended the evening with memories of his life, including as the first African-American chaplain for Fairfax County Police Department. He said the position was offered him 38 years ago following an officer-involved shooting of a man in front of his wife and child inside their home.

Baltimore at one time led the Baptist Convention linked to the Rev. Dr. Martin Luther King Jr. – “I have marched, I have demonstrated until these old bones ached.”

He said he grew up poor in Fauquier County at a time when was taught to call white children, even those younger than him, “Mr.” and “Miss.” Carroll shared a sentiment felt by many: “Enough is enough.” He wondered aloud if white men were willing to accept the position that people of color are equal.

In the year 2020, when he drives into certain counties, Baltimore said, he makes sure to keep his driver’s license in plain view on his lap in case he gets stopped by police. He said he doesn’t want to have go digging around for it and have something happen.

“I want to live another day," Baltimore said, noting, “The hope for future generations is not possible if we are silent.”

The current movement is about policies being developed to impact the poor and marginalized, but everyone is in jeopardy if that doesn’t happen, the bishop said: “This is a revolution we are living in – I believe a change is coming.”