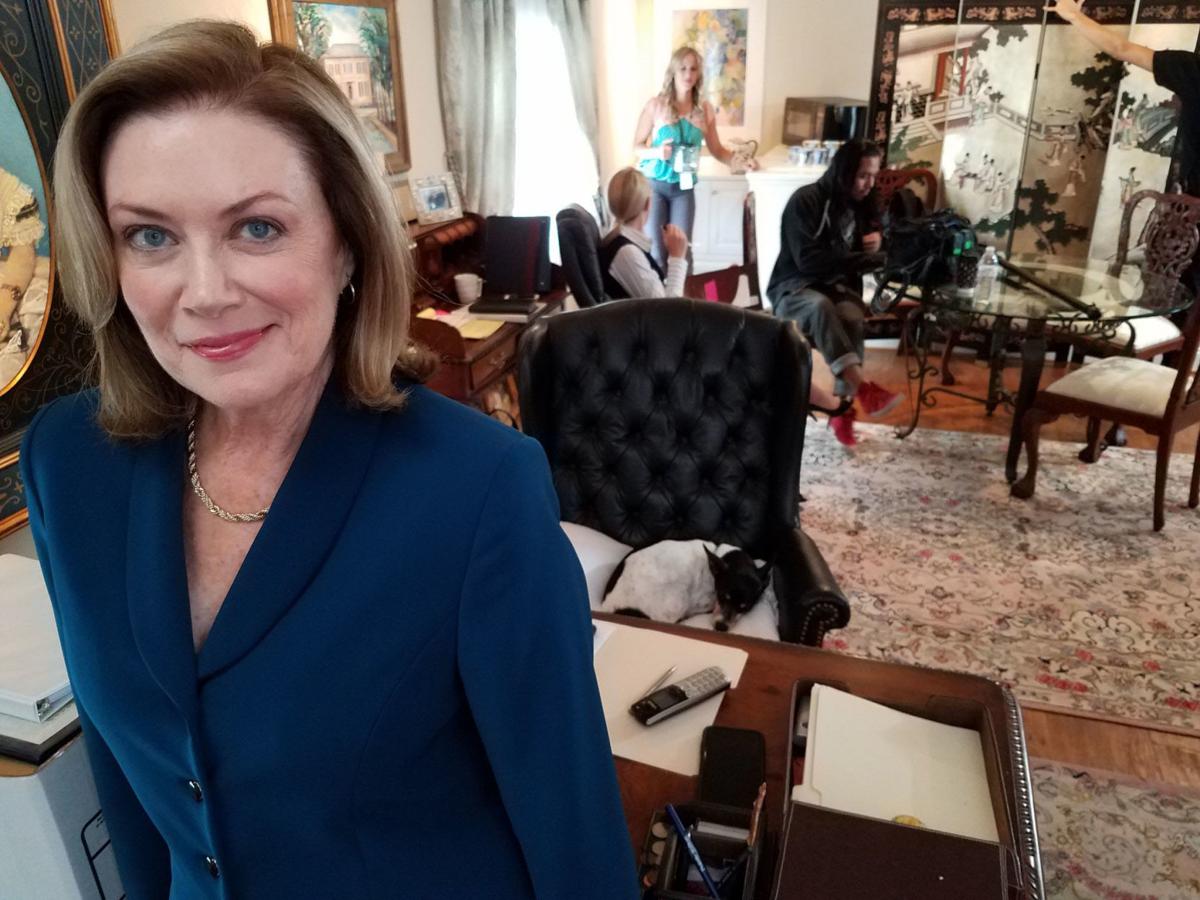 Actress Nancy Stafford on the set of "First Lady." 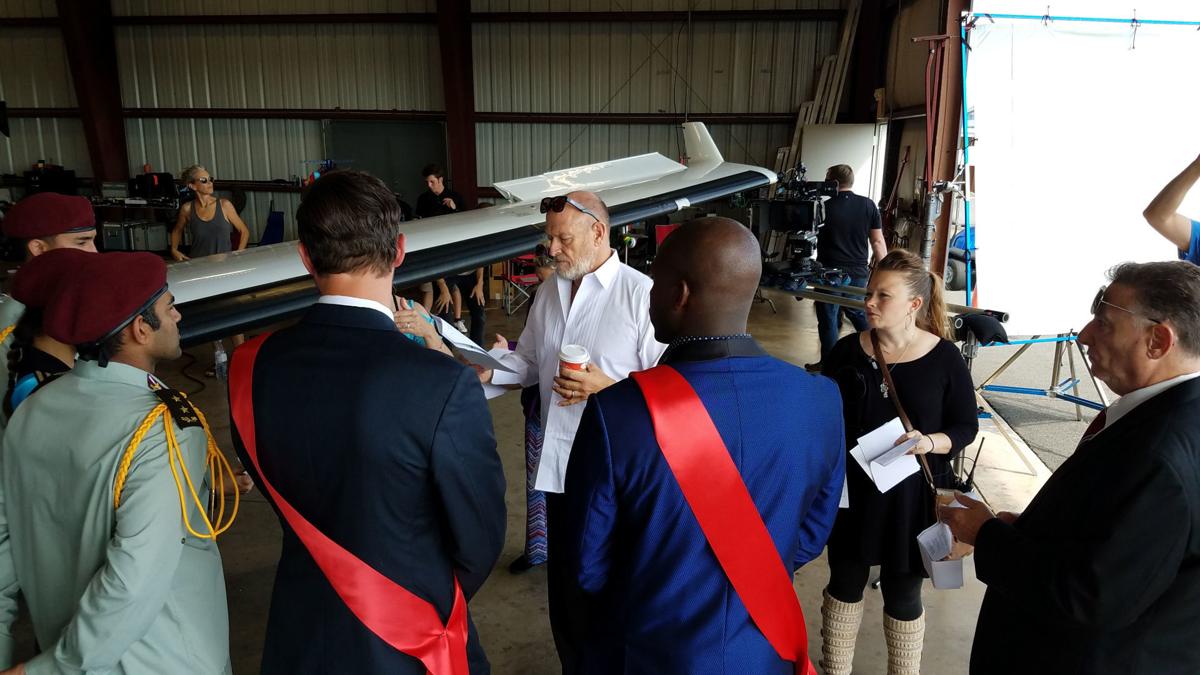 "L.A. Law" actor Corbin Bernsen films a scene for "First Lady" in 2018 in a hangar at Culpeper Regional Airport. 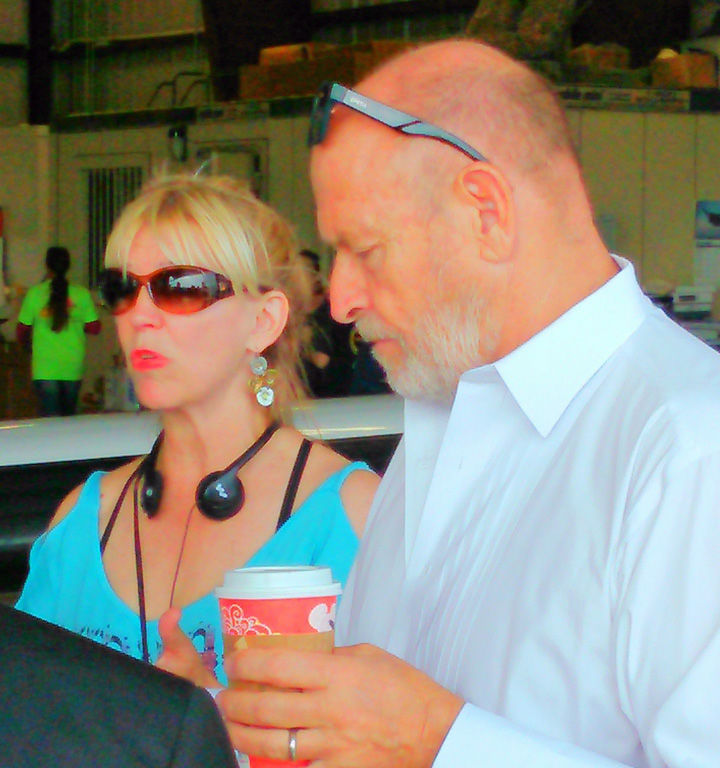 Director Nina May and actor Corbin Bernsen film a scene for “First Lady” in 2018 at Culpeper Regional Airport. 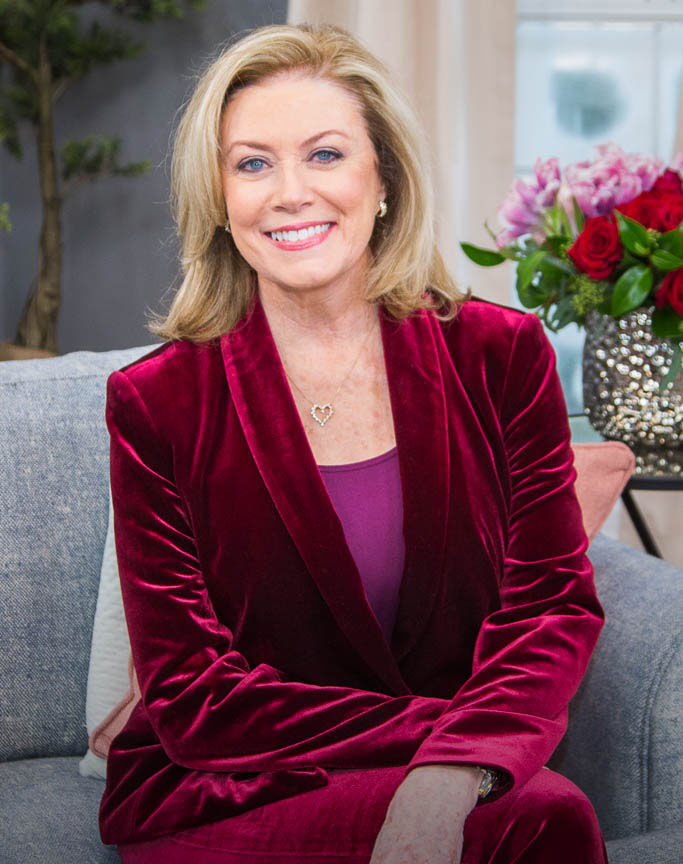 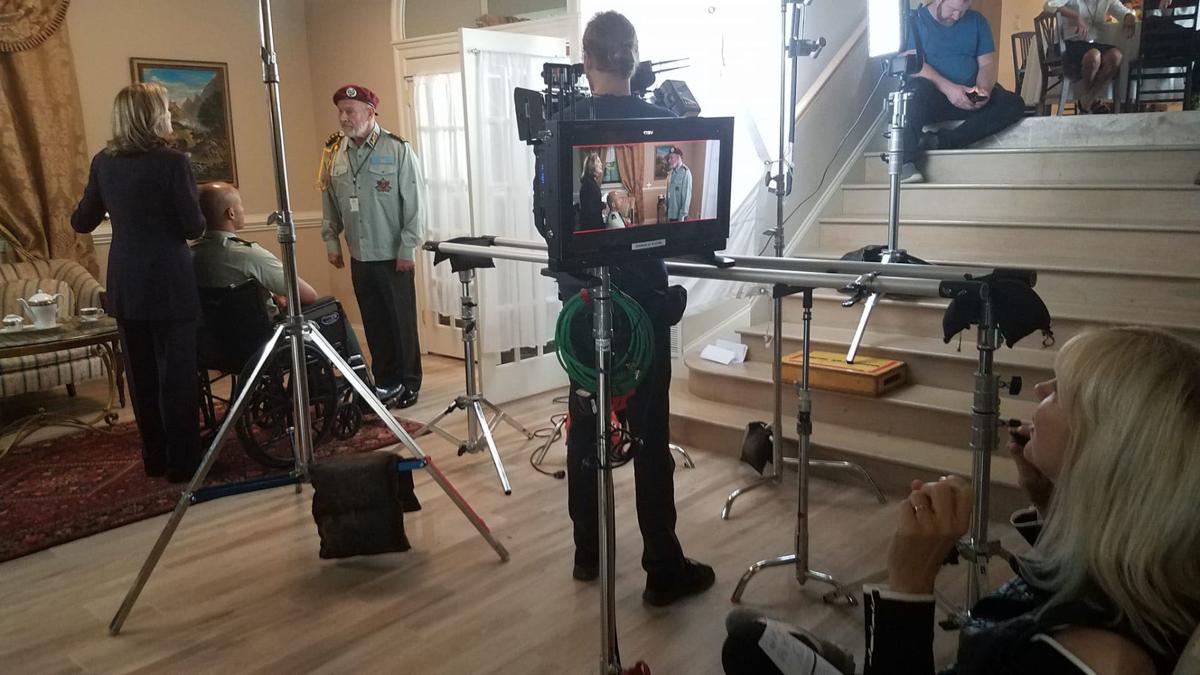 Director Nina May (right) films actor Corbin Bernsen (at left) in the new film, "First Lady," opening in theaters across the country this Valentine's Day. 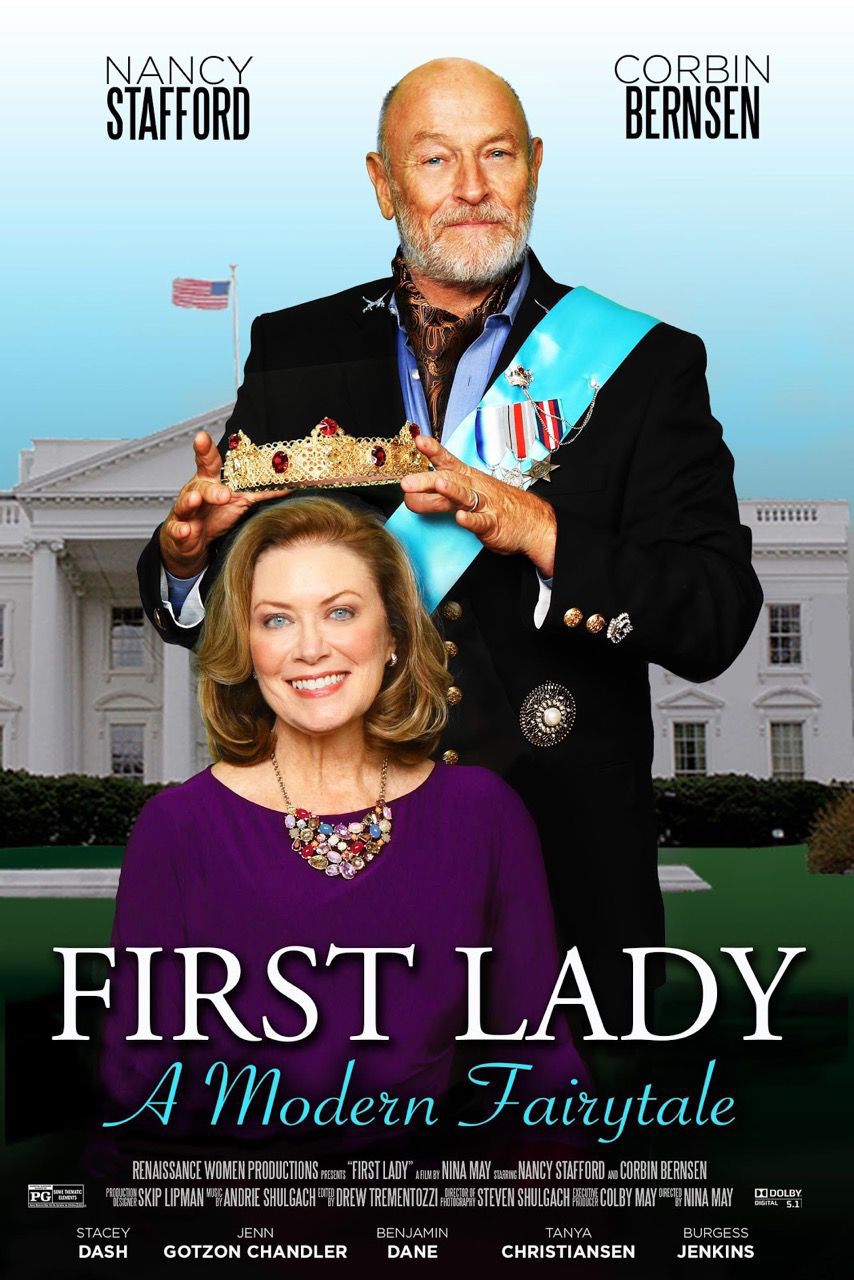 Actress Nancy Stafford on the set of "First Lady."

"L.A. Law" actor Corbin Bernsen films a scene for "First Lady" in 2018 in a hangar at Culpeper Regional Airport.

Director Nina May and actor Corbin Bernsen film a scene for “First Lady” in 2018 at Culpeper Regional Airport.

Director Nina May (right) films actor Corbin Bernsen (at left) in the new film, "First Lady," opening in theaters across the country this Valentine's Day.

A romantic comedy with a hometown connection opens in theaters nationwide on Valentine’s Day.

“First Lady” is the latest project of Rappahannock-based director Nina May, founder and president of Renaissance Women Productions. Starring Corbin Bernsen, the Emmy-nominated “L.A. Law” actor, and Nancy Stafford, formerly of “Matlock,” the movie was partially filmed in this area, including scenes in downtown Culpeper and at Culpeper Regional Airport.

The backdrop for “First Lady” is presidential pursuits and royal charm, but it leaves out the politics.

“I love romantic comedies that the whole family can see together,” May said. “I just thought it would be a fun premise—can a woman not married to the president run for first lady?”

That’s what Stafford’s character does after her husband, the president, dies in office. As the vice president, played by Bernsen, prepares to run for president in the coming election, she decides to run alongside him. In the process, an old love is rekindled.

The film is rated PG and suitable for all ages, May said.

“Because it is releasing on Valentine’s Day, we are saying it is a date night for the whole family,” she said. “It is a modern fairy tale, which everyone loves. Seeing Corbin Bernsen in a romantic, funny lead is very endearing. He and Nancy have great chemistry together.”

Bernsen, in a recent interview about the movie on Lynchburg talk radio WLNI, said he had known the leading lady for years, though the two had never acted together.

“As actors you wonder when you’re going to finally work with somebody and this came along, she was there, the timing felt right,” he said. “Then I read the script through the eye of this (political) fight we’re in, this struggle and what stories can take you into the fantasy world of what life can be, and love, in these troubled times.”

Women not married to U.S. presidents have served as first lady a few times in history, Bernsen said, adding he and Stafford’s character knew each other in another life.

“I am somebody from her past,” said Bernsen, who in addition to vice president portrays the king of a small fictitious European country. “We met many, many years ago and I come back into her life so in the end she gets renewed love, the vice president becomes president and all is saved … Everybody lives happily ever after. It’s a nice relief.”

Culpeper resident Adam Forster, station manager at Virginia Living Television, helped on the film as location manager and with publicity. He arranged the autumn 2018 shoot at the local airport and found a plane to use as well in the scene when Bernsen is decked out in royal regalia.

“I love that it’s a fun movie set in the political arena, but it has no politics in it,” Forster said. “It’s all about people, character and the drama of living. It’s also an autumn romance, proving that there is still so much life to live after 60. Our culture is orientated around the young and is always putting out the message that older people have little to offer.”

Both of the film’s stars are 65 years old and living very active lives, including numerous press appearances around the country. May and Stafford are slated to appear Friday morning in the New York studio of Fox & Friends, according to Forster.

Stafford recently appeared on the Hallmark Channel’s “Home & Family” program to talk about the movie. “It’s the premise of, can love have a second chance?” she said.

“The best qualities of all of them starting with Jackie Kennedy because our situations were kind of similar—her husband dies in office—so there is this scene where I have to have the complexity of being dignified at the death bed as the new president is sworn in,” Stafford said.

The actress, in becoming first lady, also borrowed from the “feistiness of Barbara Bush, that force of nature,” along with “the dignity and diplomacy of Laura Bush,” and “the self-confidence and ability to motivate people to action of Michelle Obama.”

May said she is already working on a “First Lady 2.”

“When you see it, you will see why it lends itself perfectly to a sequel,” she said, adding, “Renaissance Women Productions has about five other scripts we are wanting to move through development so stay tuned. Lots of fun things happening in the Culpeper area.”

For information about the movie and to see where it will be playing, see firstladymovie.com. In the area, it will screen at Regal Stonefield in Charlottesville, Regal Fredericksburg and Regal Manassas.