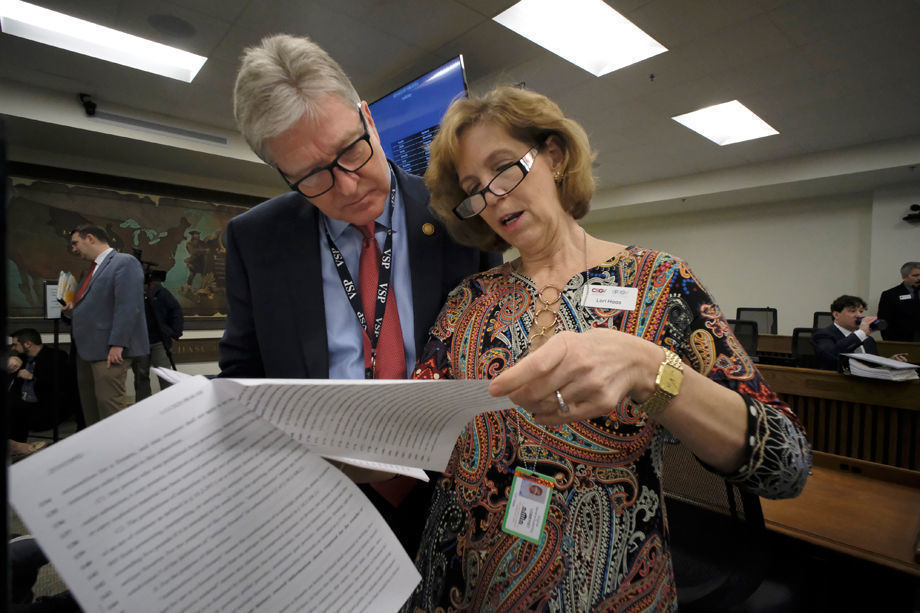 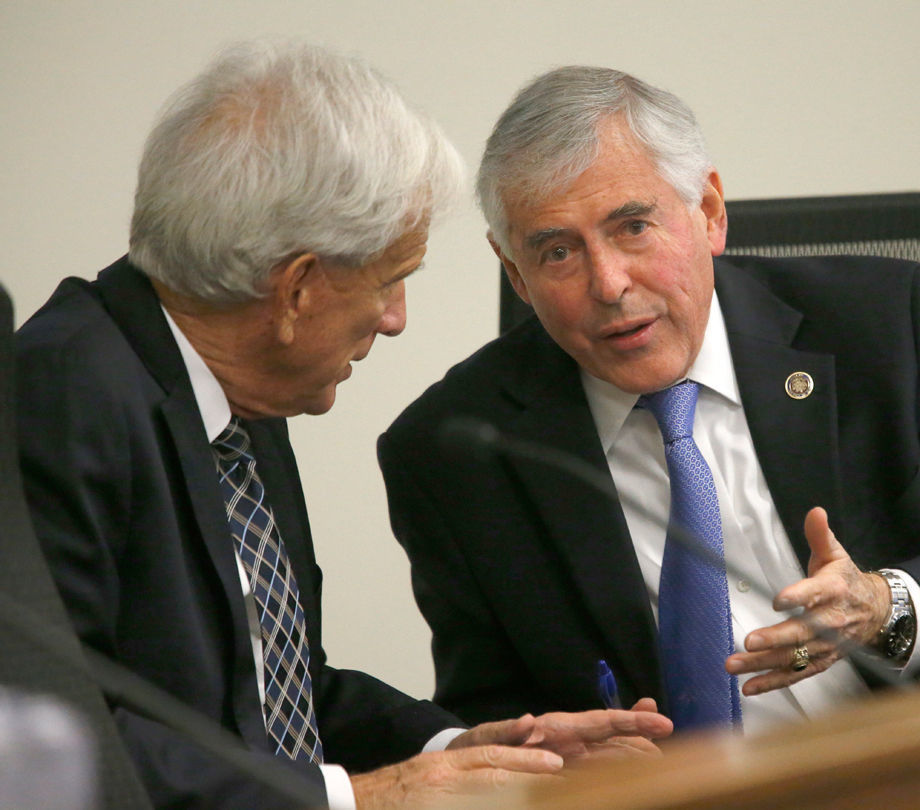 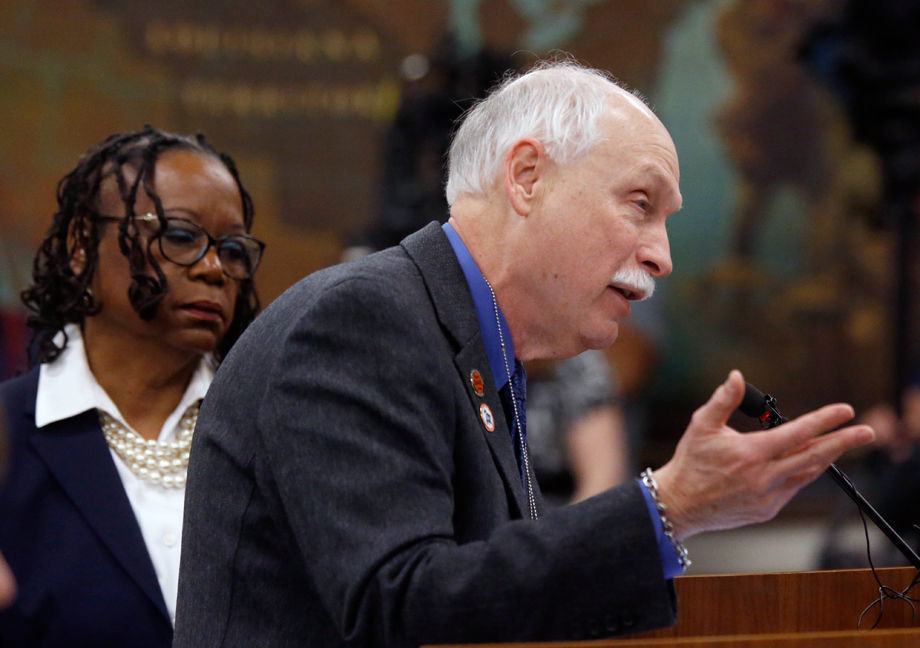 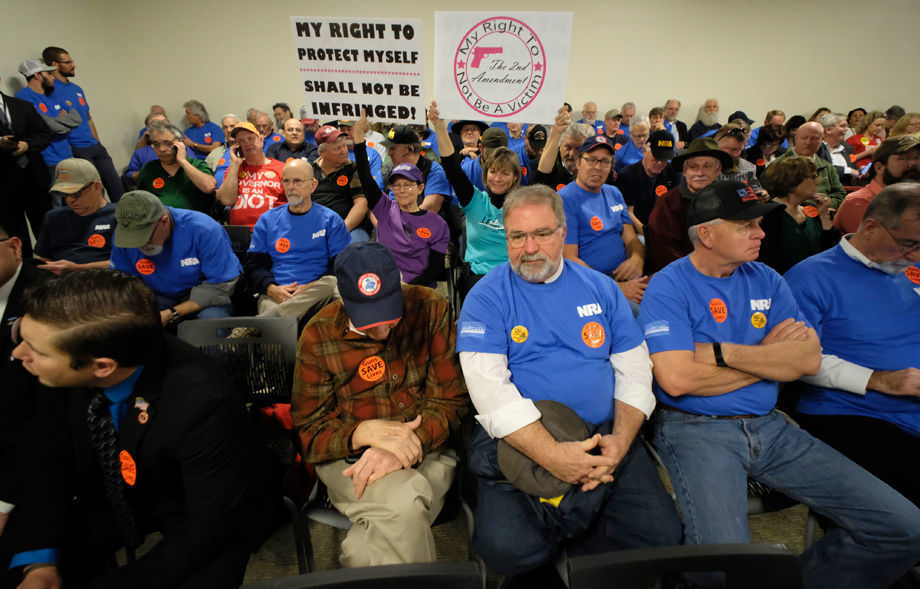 Assembled on one side of the room, gun rights supporters attend Monday’s meeting to demonstrate their objections to the gun control legislation during a meeting of the Senate Judiciary Committee inside the Pocahontas Building in Richmond on Monday.

Assembled on one side of the room, gun rights supporters attend Monday’s meeting to demonstrate their objections to the gun control legislation during a meeting of the Senate Judiciary Committee inside the Pocahontas Building in Richmond on Monday.

RICHMOND—The first set of gun control bills proposed by Virginia Democrats sailed out of a Senate committee Monday before a packed room of gun control and gun rights advocates.

All nine of the Democrats on the Senate Judiciary Committee voted in favor of the bills, which would expand background checks on all firearm sales, limit handgun purchases to one per month, allow courts to temporarily remove guns from someone deemed a risk to himself or others, and allow localities to ban weapons from certain events. The five Republicans who attended the meeting voted against each of the bills.

Democrats campaigned this fall on delivering Virginians gun control laws, some of which have broad public support, according to polls. Republicans depicted Democrats as motivated by money gun control groups poured into the election.

For families of the victims of the 2007 Virginia Tech mass shootings who spoke at the meeting in favor of the bills, Monday marked a small first step toward their longtime goal of passing gun control in Virginia. Lori Haas, whose daughter survived after being shot at Virginia Tech, rejected the notion Republicans are making that the legislation is passing because billionaire Michael Bloomberg’s gun safety advocacy group contributed to Virginia’s 2019 elections.

“The Virginia Tech tragedy happened in 2007, and here we are in 2020, nearly 13 years later, this is not new,” Haas said. “While Mr. Bloomberg has been supportive of stopping gun violence, this is generating from Virginians frustrated about gun deaths and violence in the commonwealth and wanting something done about it. They sent that message in November and voted for Democrats who would do something about it.”

The four bills that advanced from the Senate Judiciary Committee, chaired by Sen. John Edwards, D-Roanoke, have the backing of the Northam administration. They’re moving to the Senate for a floor vote.

The one-handgun-a-month legislation would restore the law the General Assembly repealed in 2012 at the urging of then-Gov. Bob McDonnell, a Republican. It was enacted in 1993, under Gov. Douglas Wilder, a Democrat, at a time when Virginia had built a reputation as a gunrunning haven.

Democrats and Republicans debated the logistics of the other bills.

Sen. Chap Petersen, D-Fairfax City, offered a different version of the expanded background checks bill so that background checks don’t apply to firearms transfers. He rattled off hunting scenarios and worried that the original bill offered by Sen. Louise Lucas, D-Portsmouth, would unintentionally net people not intending to violate the law.

“I think it’s important we be precise with this law and not sweep up other people,” Petersen said.

Lucas, Moran and gun control activists opposed Petersen’s change and said they would try to work to expand the background checks to transfers. The committee approved Petersen’s suggestions.

Thousands of activists from both sides of the gun debate converged on the Capitol, wearing “Background Checks Save Lives” and “Guns Save Lives” stickers.

Monday was the first business day that a new rule by the newly empowered Democrats went into effect that banned the carrying of firearms inside the Capitol and building that houses the legislators’ offices and meeting rooms.

The National Rifle Association pushed for gun owners to attend Monday’s meeting to demonstrate their objections to the legislation. The lobbying group handed out T-shirts and 30-round magazines, which were unloaded.

“This is straight up gun confiscation. It’s unconstitutional and we will not stand for it,” said Dan Keating, of Lynchburg, banging on the podium as he walked away after speaking against the “red flag” law.

Down the hall from the Senate Judiciary meeting, Republicans held a press conference, where House Minority Leader Todd Gilbert, R-Shenandoah, said the Republicans don’t have the votes to stop the gun control proposals the Democrats are pushing. He urged residents opposed to bills to make their voices heard.

“What is going on right now is an assault on law-abiding gun owners, nothing more, nothing less,” Andrew Witing, of Franklin County, said at the press conference. “Don’t let them come at you with the guise of ‘commonsense,’ because commonsense is not so common anymore.”

The bills that advanced from the committee were some of the least contentious ones. There are still numerous other bills for lawmakers to consider this session, including banning people with a restraining order against them from possessing a firearm and requiring the reporting of lost or stolen firearms.

One of the bills likely to produce much debate will be expanding the definition of an assault weapon and prohibiting the ownership of one.

A version of that bill, from Sen. Dick Saslaw, D-Fairfax, has stoked a lot of emotions from gun owners. It didn’t include any language permitting those currently owning assault weapons to keep them. Another version allows that. On Monday, Saslaw had his bill struck, so it’s no longer being considered.

Republicans have also introduced bills to shore up gun rights, although they are unlikely to pass.

Del. James Edmunds, R-Halifax, and Sen. Steve Newman, R-Lynchburg, filed bills that would allow a person to lawfully possess, purchase or transport firearms in localities that have adopted ordinances or resolutions declaring themselves Second Amendment sanctuaries. More than 120 localities have proclaimed they are since Democrats won control of the statehouse in November.

“You didn’t get a mandate when you got elected in November,” said Culpeper County Sheriff Scott Jenkins, who has appeared on Fox News to speak out against gun control. “You’re seeing the resolutions throughout the state, and I hope you listen, otherwise, thank you for the first step in flipping us red in this state.”

RICHMOND — Several months after a gunman killed 32 people at Virginia Tech in 2007, a bill to require background checks on all firearm purchases at gun shows didn’t make it out of a committee in the Virginia State Senate. Sen. John Edwards, D-Roanoke, cast a vote against it.

RICHMOND — State lawmakers approved a new gun policy that will prohibit the public as well as its own members from carrying firearms inside the Capitol and a nearby office building where General Assembly members work.

It’s a new day in Richmond as Democrats assume control of the Virginia General Assembly with a full plate of issues to digest over the next few months.