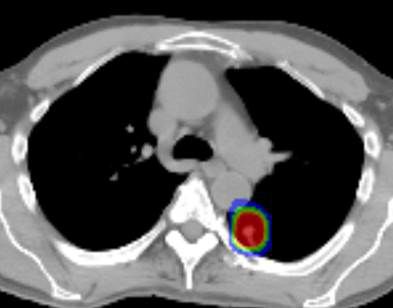 A cross-sectional view of a person’s chest taken during Stereotactic Body Radiation Therapy, a cancer treatment now being offered at Culpeper Medical Center. An example dose distribution from lung SBRT. The upper images is a coronal (front) view and the lower is an axial (cross sectional) view. 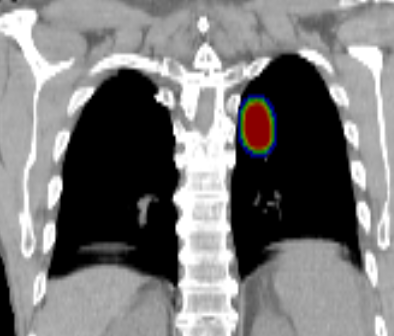 A cross-sectional view of a person’s chest taken during Stereotactic Body Radiation Therapy, a cancer treatment now being offered at Culpeper Medical Center. An example dose distribution from lung SBRT. The upper images is a coronal (front) view and the lower is an axial (cross sectional) view.

The center, a facility of Novant Health UVA Health System, announced Monday that it has introduced the treatment locally.

No longer will patients need to leave the community to receive cancer care when their state of health is most vulnerable.

“Before now, cancer patients in the Culpeper community had to travel approximately 45 minutes in any direction to receive SRS care,” Dr. Jonathan D’Souza, chief medical officer at Culpeper Medical Center, said in a statement. “Patients rely on their community hospital to offer the most effective, advanced treatment options close to home. The COPN we were recently granted is most certainly a win for our community.”

Stereotactic radiosurgery is a less invasive, less risky alternative to conventional surgery for many cancer patients, the hospital said.

A shorter treatment schedule is one of the major advantages to SRS, which comes in two common types—stereotactic radiosurgery (SRS) and stereotactic radiation therapy (SRT).

Dr. Shiv R. Khandelwal, the medical director of radiation oncology at the Culpeper hospital said typically SRS is used on the brain, and the treatment is usually done in one day. SRT is used on the trunk of the body, and treatment occurs over several days. SRS delivers a high dose of radiation to a small, focused area.

They also are being investigated as a treatment for early-stage breast cancer, he said in an interview Friday.

“That’s still got a ways to go,” Khandelwal said of the early-stage research.

One of the investigators who launched that research, at the University of Texas Southwestern, is a former resident at U.Va. who worked at Culpeper Medical Center, he noted. Dr. Asal Rahimi is now an associate professor of radiation oncology at the highly regarded UT Southwestern Medical Center.

The non-surgical technique delivers precisely-targeted radiation in fewer, high-dose treatments than traditional therapy, which can help save healthy tissue.

The system was invented by a “genius” medical-physics professor at the University of Wisconsin, Thomas “Rock” Mackie, he noted.

TomoTherapy’s cancer-treatment technology delivers radiation with a linear accelerator guided by physicians using a built-in CT scanner, according to the University of Wisconsin-Madison. Compared to traditional therapy, its ultra-precise targeting kills a tumor more effectively, reduces side effects and helps preserve healthy tissue.

Such radiosurgery relies on several technologies, according to radiologyinfo.org.

It uses three-dimensional imaging to exactly determine the coordinates of the target inside the body, and other systems to immobilize the patient during therapy and tightly focus gamma-ray or X-ray beams on their tumor or abnormality, radiologyinfo.org states.

The intensity-modulated radiation therapy lets doctors shape doses around an internal structure, so the radiation is delivered exactly where it is needed.

“Historically, treatment was given with two to four different, fixed radiation beams,” Khandelwal said. “SRS is given using 8,000 to 10,000 tiny little beamlets. That allows better sparing of normal tissues, and allows us to concentrate higher doses in a tumor than we historically might have been able to do.”

Medical experts have long directed radiation-therapy research toward maximizing the “therapeutic radio,” enhancing treatment’s effectiveness while minimizing its side effects, he said.

“This is another step in that vein,” Khandelwal said.

For decades, radiation therapy required daily treatments lasting five to seven weeks, and was less effective than SRS, he said.

Then a neurosurgeon in Sweden developed SRS and its Gamma Knife machine, which precisely delivers radiation in the brain, focusing very high doses on a very small target. The University of Virginia acquired the second Gamma Knife to be used in the United States, Khandelwal said.

Researchers in Dallas at the University of Texas Southwestern figured out how to apply the same techniques to other organs and other parts of the body, he said.

The University of Virginia was another leading institution in developing SRS, Khandelwal said.

Khandelwal had advocated for offering SRS at Culpeper for years. Hospital leaders agreed to pursue it last fall, and the state Health Department granted the certificate in April.

A U.Va. faculty member, Khandelwal noted that the same medical physicists who staff U.Va.’s oncology facilities also staff those at Culpeper, sharing the same expertise in both places.

SRS “works by an entirely different mechanism” than traditional radiation therapy, Khandelwal said. The dose it delivers is an order of magnitude higher.

“The idea is that instead of shrinking a tumor slowly over time, SRS gives very high-dose, pinpoint radiation that destroys the tissue in the target area,” he said.

Most commonly, SRS is used to treat people with stage-1 lung cancer who decline surgery or aren’t candidates for surgery because of emphysema or other issues, Khandelwal said.

Data shows that SRS successfully ablates a target tumor 80-plus percent of the time, he said. That’s comparable to what traditional, invasive surgery accomplishes.

Other SRS facilities in the region are at U.Va. and Sentara Martha Jefferson Hospital in Charlottesville, Mary Washington Hospital in Fredericksburg and the Cancer Center at Lake Manassas in Prince William County.

Founded in 2016 and headquartered in Warrenton, the regional system is a partnership between Novant Health and UVA Health System. It provides subspecialty care, groundbreaking clinical trials, and urgent and primary care close to home.