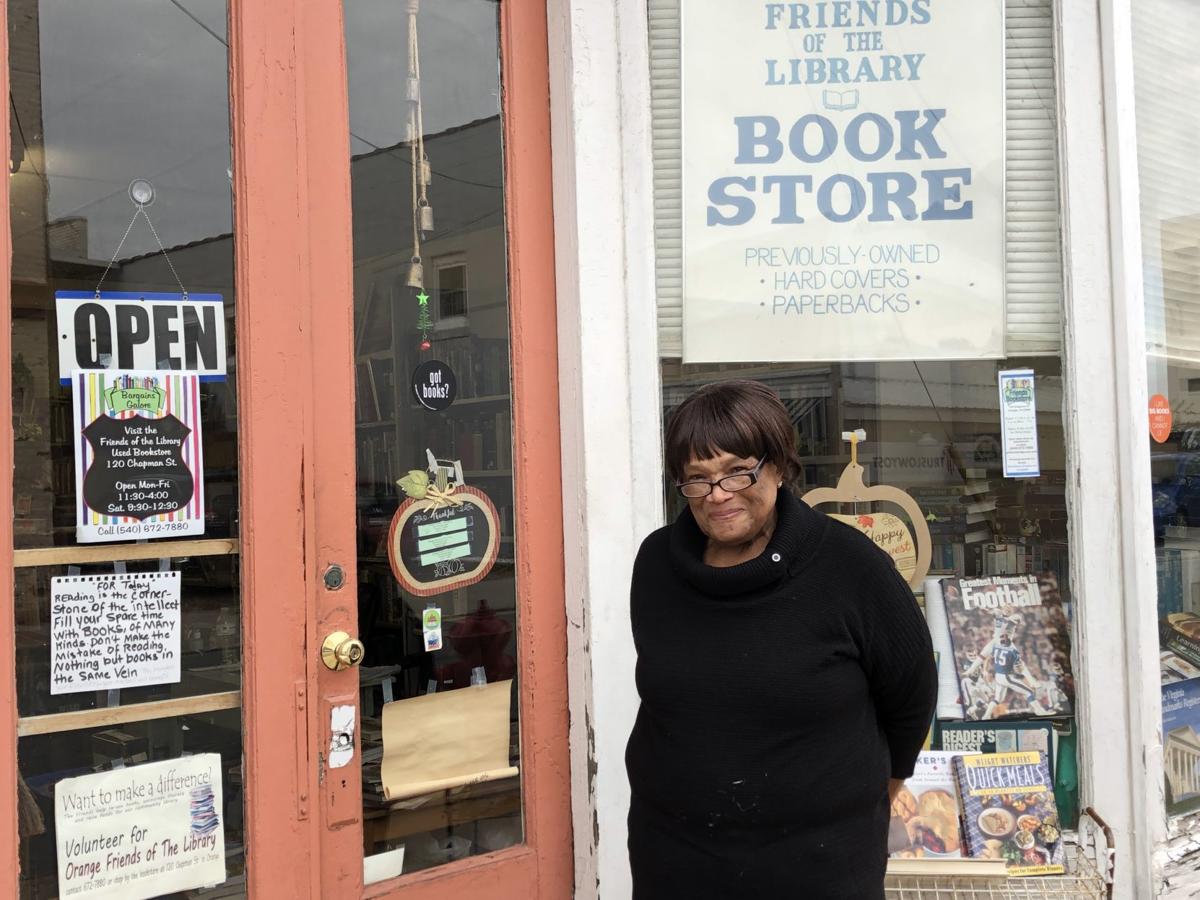 Elouise Poindexter is secretary of the Friends of the Library in Orange and sales clerk of the Friends’ bookstore on Chapman Street in town. 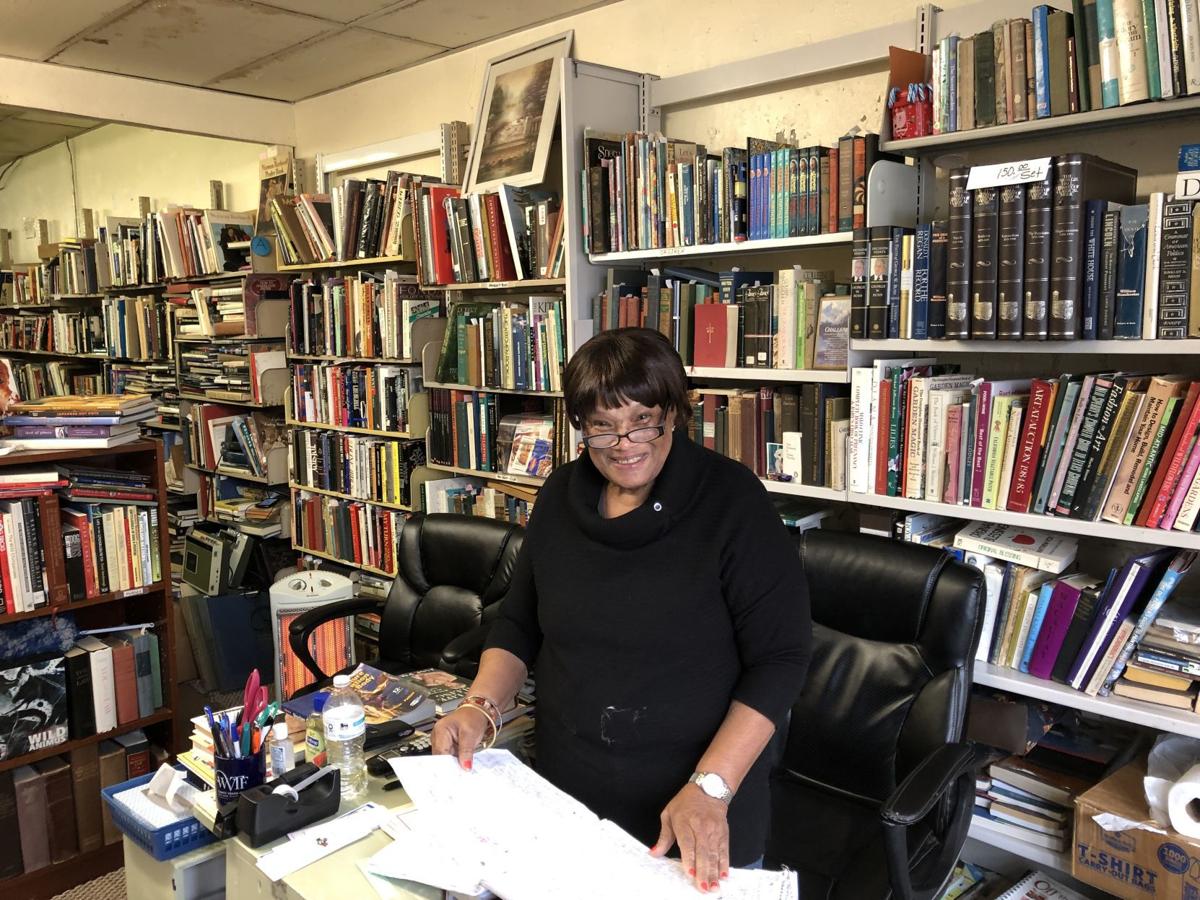 Elouise Poindexter is secretary of the Friends of the Library in Orange and sales clerk of the Friends’ bookstore on Chapman Street in town.

Elouise Poindexter remembers the time a man visiting from Texas walked inside the Orange County Friends of the Library bookstore and went down on his knees and dramatically raised his arms in praise.

“I finally found a bookstore!” the man said, in Poindexter’s recollection.

That day and the next, he shopped at the unassuming little store and purchased so many books he needed boxes to haul them away.

During a recent interview at the shop on Chapman Street in Orange, where she sat behind a desk surrounded by books, Poindexter said the store is popular with out-of-towners, including people from other countries who travel to Washington on business and make a side trip to Orange.

“We have people coming here from all over the world!” she said, a touch of awe in her voice.

Poindexter is the shop’s sales clerk and secretary of the Friends of the Library for the main branch of the county library system. She got involved with the bookstore at the invitation of Phil Cooke, president of the town library’s Friends.

Poindexter thinks very highly of Cooke, who suffered a series of strokes beginning a few years ago and has turned over daily operation of the story to her.

With a warm smile, she said of her fellow volunteer, “He’s a nice person to work with. He loves to tell jokes and he keeps you happy. He gives you good advice. He’s like a big brother.”

Reached by phone, Cooke said he started selling used books for the Friends of the Library when the main library needed a place to store books it no longer wanted. He had space in his travel agency, which used to be on the opposite side of Chapman Street. When he moved his business across the street, the bookshop moved with it.

Describing his approach to the shop, he said, “I was low-key and welcomed anybody in the store.”

In the spirit of getting books into readers’ hands, Cooke has given away countless used books to the residents at Dogwood Village, Fox Trail, the Central Virginia Regional Jail and, as Poindexter puts it, “any organization that has a need” for books.

Originally from Fredericksburg, Cooke started a travel agency in his hometown and then opened a branch in Orange. He eventually moved to Orange and has been a community booster ever since.

Cooke’s sister, Susie Simko, lauds him for his many years of volunteer work.

“He’s always helped in the community wherever and whenever he can. He sees an opportunity to help—he stops and helps.”

As for his decades of involvement with the Friends of the Library, she said, “Running the bookstore is an opportunity to encourage kids to keep reading.”

Asked whether her brother is a big reader, she paused to ask him whether it was OK to tell a tale on him.

“He doesn’t read books that much, but he’s extremely knowledgeable, so I don’t know where he gets it from,” Simko said with a chuckle.

In Cooke’s absence, Poindexter keeps everything running smoothly at the bookstore, which has long aisles crammed with thousands of books—fiction, drama, poetry, cookbooks, history, children’s books, you name it. The books are in good, often excellent condition, and prices are reasonable, far below what you generally would pay for books elsewhere.

On a typical day, Poindexter has customers to help, book donations to accept and shelve, and a record log to keep. The log, which she writes by hand, is a journal of updates and tidbits of news for Cooke, whom she talks to just about every day.

The shop has regular customers from Orange County and the surrounding area as well as the occasional drop-in visitor from Nigeria or some other far-flung place. Poindexter said lawyers sometimes stop by before they go to court and a local judge makes frequent visits, too.

She is pleased when customers bring their elderly mothers, some of them in wheelchairs, into the store: “It gives me joy that they’re spending time with [their mothers] and letting them read, because that is so important.”

Katie Hill, director of the Orange County Library System, said each branch of the library—Orange, Gordonsville and Wilderness—has its own Friends of the Library.

Bookstore revenue and other funds donated by the Friends of the Library in Orange go toward time-sensitive purchases that the library can’t anticipate. Hill said that when vendors had sales on books on CD and large-print books, for instance, she drew on money donated by the Friends. She also turns to the Friends to support summer reading programs.

“I would say Friends’ funds help with things that the 18-month county budget cycle is unable to be responsive to,” Hill said.

“Back during the recession, we suddenly had a surging demand for public PCs, and the Friends gave us monies to buy desks for more public computers, and I was able to get more PCs to put on the desks through other funding,” she noted.

As for Cooke, who started the Friends’ bookstore, Hill is grateful: “It would never have happened without him. He has hauled more boxes of books than I could count.”