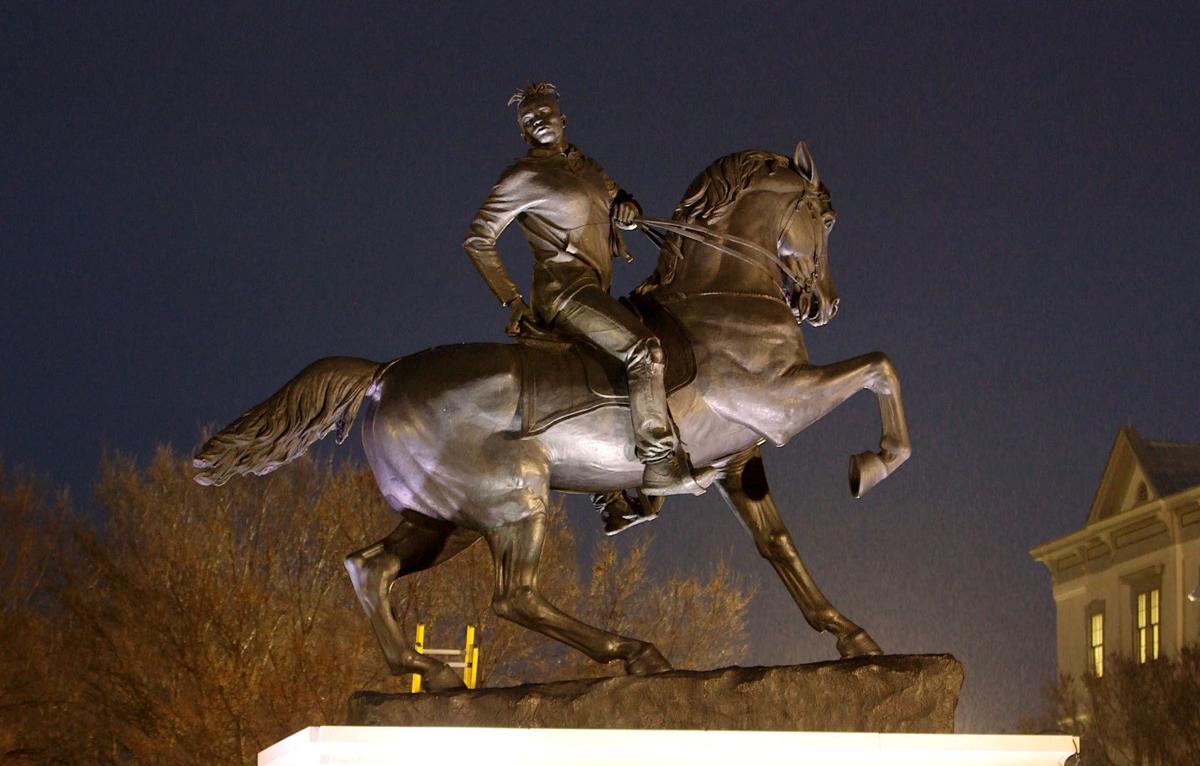 Illuminated and finally uncovered at the VMFA, after the official unveiling is Kehinde Wiley's "Rumors of War" on Dec. 10, 2019 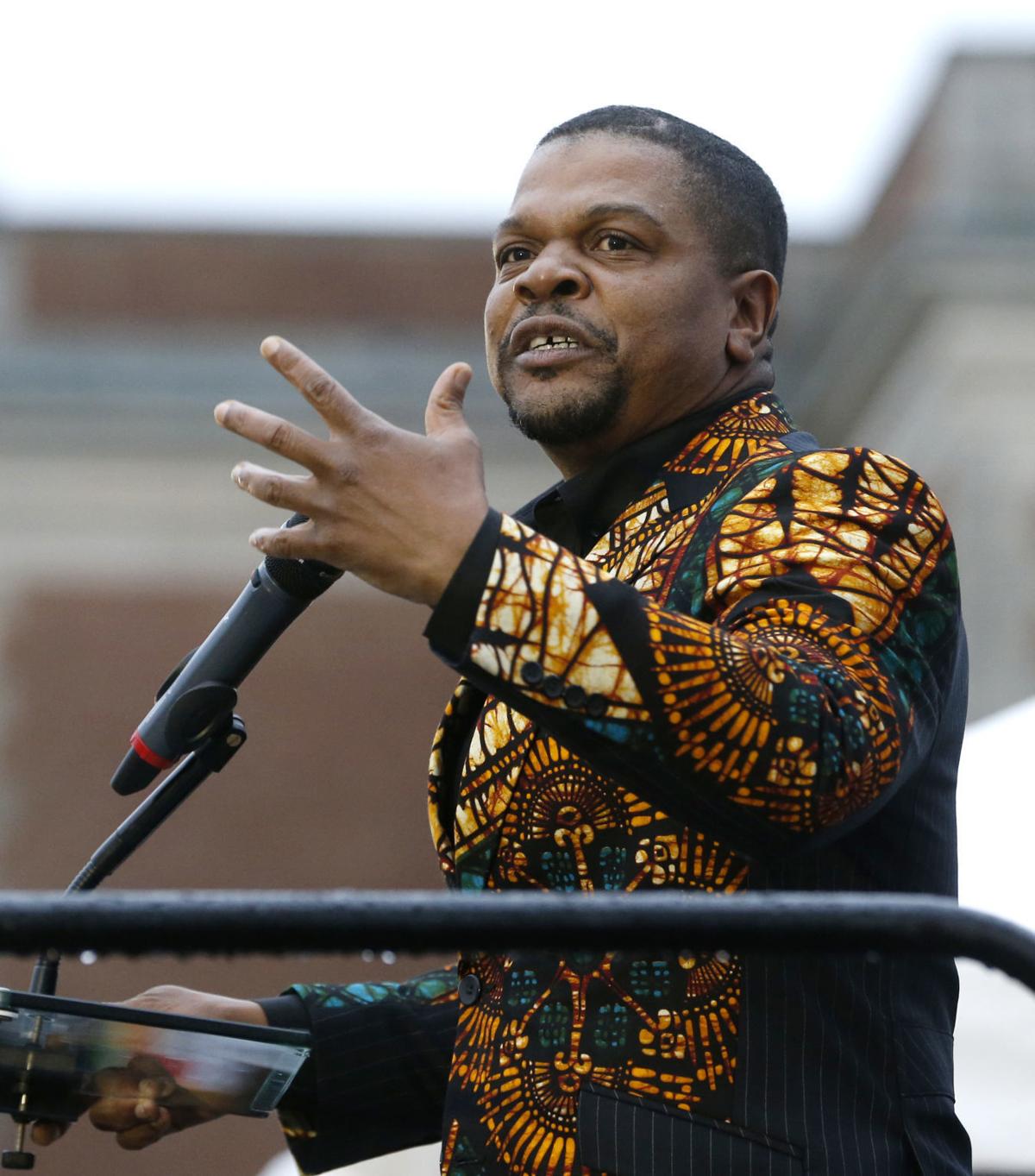 Kehinde Wiley speaks before his statue “Rumors of War” is unveiled at the VMFA Tuesday, December 10, 2019. 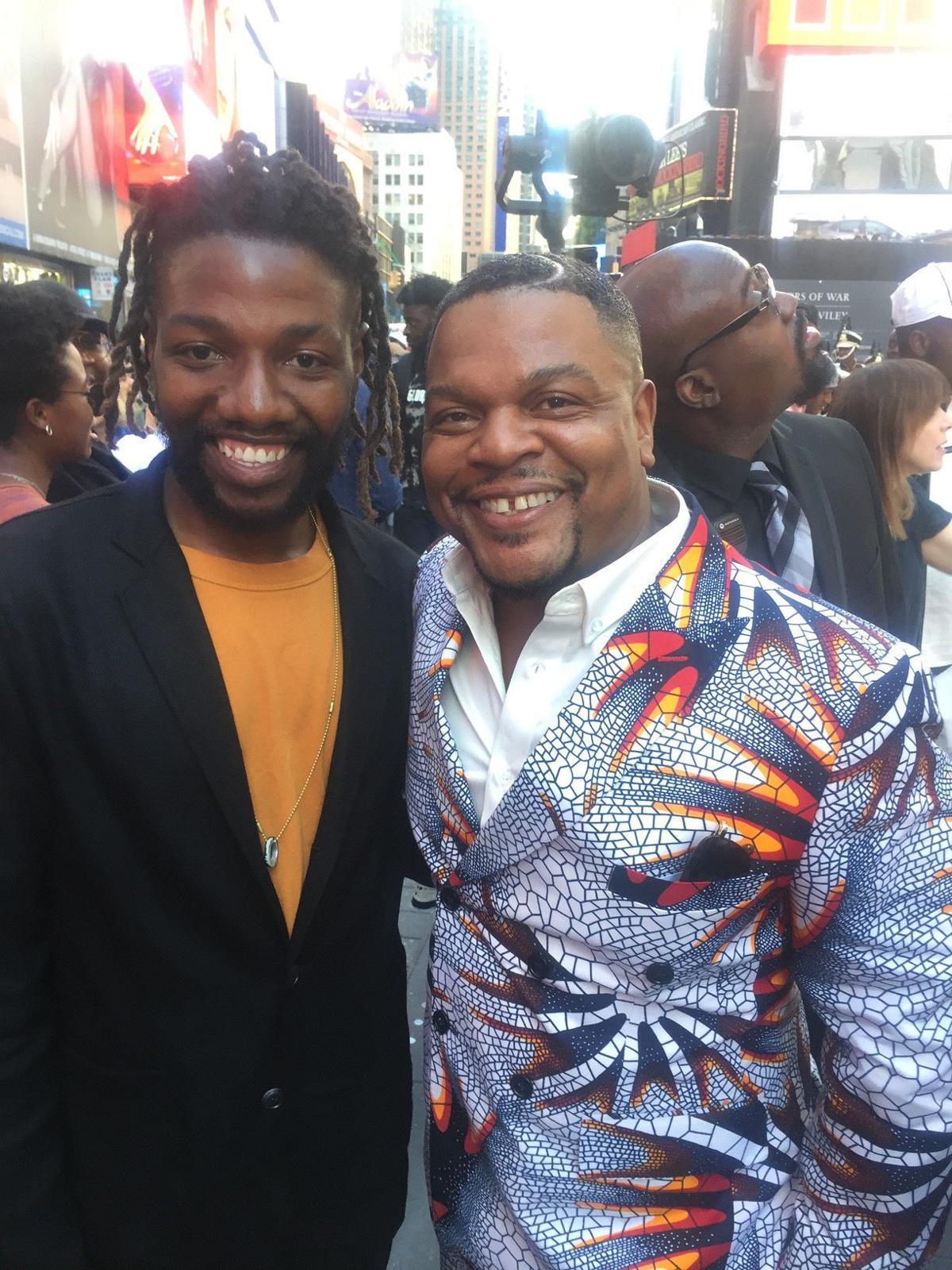 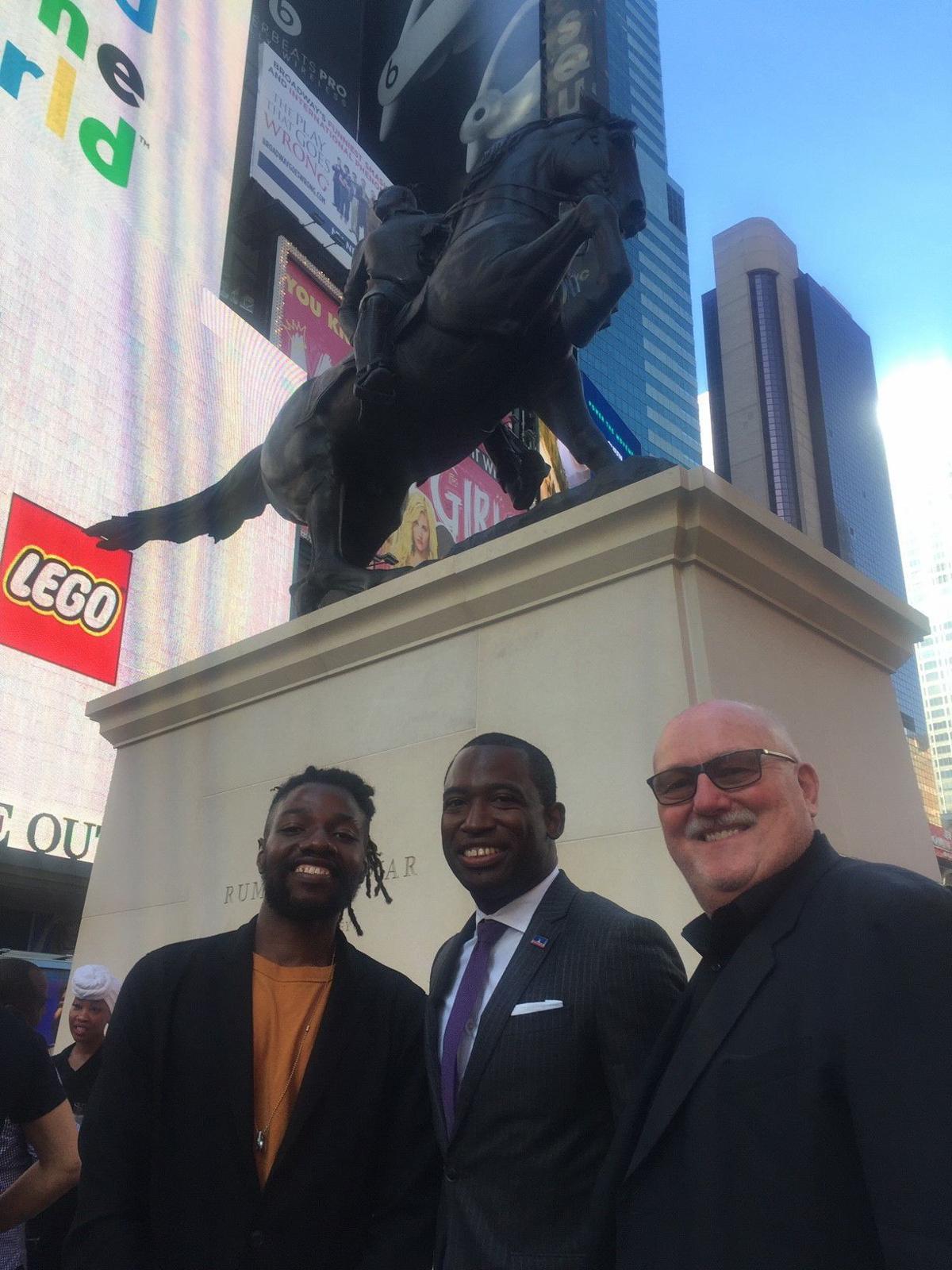 Illuminated and finally uncovered at the VMFA, after the official unveiling is Kehinde Wiley's "Rumors of War" on Dec. 10, 2019

Kehinde Wiley speaks before his statue “Rumors of War” is unveiled at the VMFA Tuesday, December 10, 2019.

Kehinde Wiley’s monumental sculpture “Rumors of War” has been installed for its official unveiling in front of the Virginia Museum of Fine Arts on Tuesday.

The sculpture depicts an African American man with a crown of dreadlocks who is wearing urban clothes and sneakers and sitting astride a horse.

It was created in response to the monument of Confederate Maj. Gen. J.E.B. Stuart on Monument Avenue that Wiley saw while he was visiting Richmond for his retrospective at the VMFA.

The face of “Rumors of War” is a composite of six different people; the artist didn’t want the sculpture to represent only one identity, but rather black American men at large.

But the body of the sculpture is based on Najee Wilson, a 32-year-old artist’s model living in Brooklyn who is originally from Charleston, S.C.

Wilson visited Richmond last weekend, starting Friday at Candela Gallery and going Saturday to Black Iris for two free events where he talked about being the inspiration for a work of art and “Rumors of War.”

We chatted with Wilson by phone before his Richmond visit about how he met Kehinde Wiley and came to work with the artist.

“We met over Instagram, actually,” Wilson said. “I saw his retrospective at the Brooklyn Museum and was struck by the magnitude of the work. How smart his choices were in creating art relevant to the time we live in.”

An artist himself with a background in design, Wilson was working as a professional model and wanted to model for Wiley.

“I’m so much like the people he represents. I found him on Instagram and sent him a message. About a month or so later, he replied and said, ‘Yes! That would be amazing.’ ”

Around that time, Wiley was announced as the artist for President Barack Obama’s official portrait, which made their connection feel even more important.

“It’s great to see a contemporary artist such as Kehinde engaged with social media and using it to fuel his work,” Wilson said.

“It was a very long day. We shot a ton of stuff. He works by way of photography. A lot of the work is done by documenting the various tableaux he wants to create,” Wilson said.

“When we started to create the work, he had an armature. There was no real horse. I took that pose, of ‘Rumors of War,’ that was the first pose I did. He said, ‘Oh my gosh, that’s it! So great! So powerful!”

Wilson said that when he works as a fine art muse, he employs the Stanislavski method used by actors to draw on experiences.

“I was channeling that of a warrior spirit, of a general. Someone very powerful, who understands the people he’s fighting with. When you look up at the figure, I’m leading the charge. Not giving orders, but to be a part of them.”

“The day I left the studio, I was reeling. I didn’t really know what I had done,” Wilson said. He wasn’t able to talk about it with family or friends because the project was top-secret.

When “‘Rumors of War” was unveiled in Times Square in New York in September, Wilson said “my jaw opened.”

“ ‘Rumors of War’ is about change. Being a black man from South Carolina, where there are so many Confederate monuments, to see where this sculpture is going, it has the ability to effect change. It’s change that people can see. I’m the muse, but it’s not exactly me.”

He talked about how the face of “Rumors of War” is a composite of six different faces.

“The portrait is for the time we live in. The people [represented] are young and old, multi-races. If you keep that in mind when you look at this figure, it’s so modern. It’s about all of us. We’re all one.”

At the Times Square unveiling, Wilson met Richmond Mayor Levar Stoney and Richmond City Council member Kim Gray, who encouraged him to make the trip to Richmond for the installation of “Rumors of War.”

Chelsea Higgs Wise, a local activist, led a discussion with Wilson at the Black Iris on Saturday about his role as muse for “Rumors of War,” where they also talked about the importance of black creatives and changing narratives in the South.

There, he said, he will “look up at something that looks like me, that looks like you. The tremendous reach of this ... to get us to believe that we can imagine a better world.”