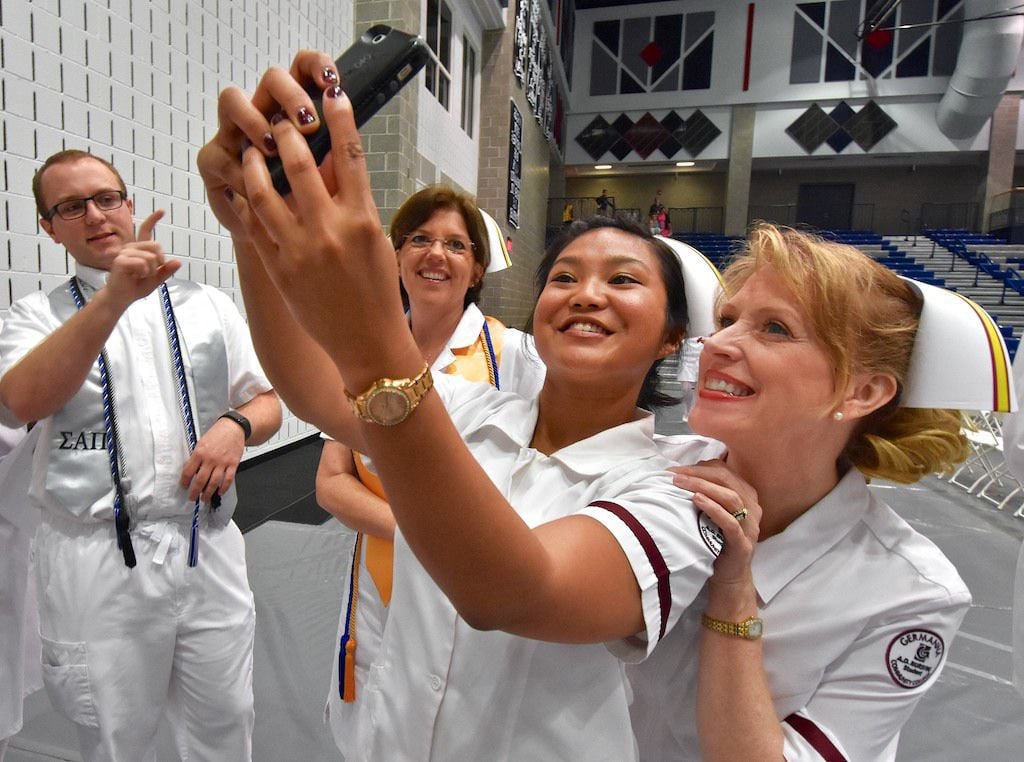 Nursing students Kathleen Miranda of Lake Anna and Machele McAllister of Spotsylvania pose for a selfie before receiving their associate in allied science degrees during a Germanna Community College convocation at the University of Mary Washington’s Anderson Center. 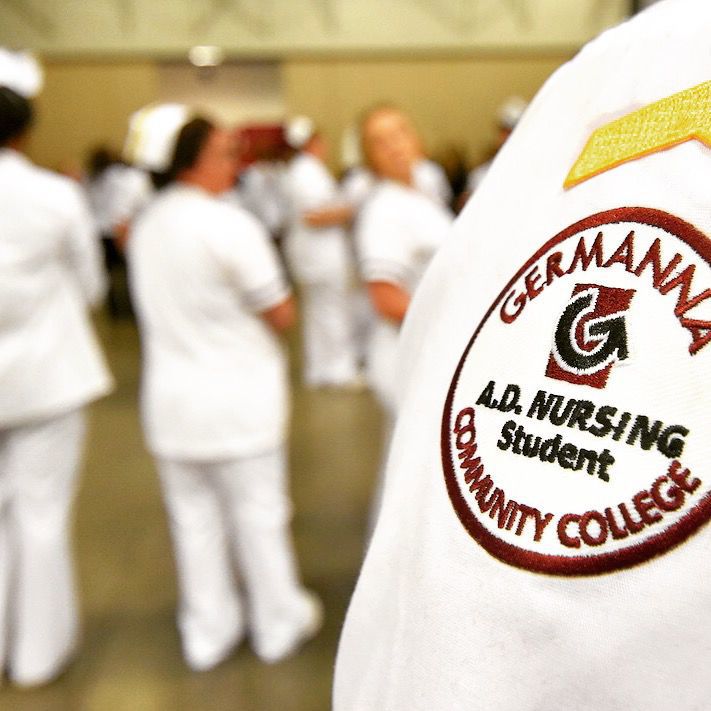 Nursing students Kathleen Miranda of Lake Anna and Machele McAllister of Spotsylvania pose for a selfie before receiving their associate in allied science degrees during a Germanna Community College convocation at the University of Mary Washington’s Anderson Center.

Desperately short of protective gear to battle the surge in COVID-19 cases, hospitals across Virginia and the country are asking people to donate equipment and even sew face-mask covers at home.

Responding to that critical need, Germanna Community College has stepped up and handed over the entire stock of personal protective equipment from its nursing and workforce health-training programs to Mary Washington Healthcare’s nurses, clinicians and providers in Fredericksburg and Stafford.

Its website, marywashingtonhealthcare.com, tells people how to donate new and unopened N-95 masks, nitrile gloves and plastic face shields, and provides instructions on making covers to fit over the N-95 masks. Such covers preserve a mask for reuse, and can be replaced with a new one for each patient.

“To say the least, we are extremely thankful for their generosity,” Eileen L. Dohmann, Mary Washington Healthcare’s chief nursing officer, said Saturday afternoon. “... For this week’s donation of PPE and our longstanding partnership with Germanna Community College, MWHC is very grateful.”

Germanna officials decided on Tuesday to donate the college’s stockpiles of protective gear—mostly from its Locust Grove Campus in Orange County—to Mary Washington, and had it delivered on Thursday to Fredericksburg.

“The students, faculty and staff of Germanna are your children, your neighbors, your coworkers,” Dr. Janet Gullickson, Germanna’s president, said Saturday. We’re part of this community and we love it. We will do everything we can to help in this crisis. We’re all in this together.”

On Friday, Gov. Ralph Northam asked Virginia higher-education officials to contribute any PPE that their universities and colleges can spare.

Nationally, even before the coronavirus hit, the United States was suffering from a severe shortage of nurses.

Analysts say about a third of the nation’s nurses—more than 1 million altogether—will retire within the next decade, according to the American Association of International Healthcare Recruitment.

The need is acute both because many nurses are retiring and more Americans need nursing care as a bigger portion of the nation’s population—particularly the baby-boomer generation—grows older, said Lisk, who holds a doctorate in community college education.

“Put those two things together—retirements and the graying of America—and that makes for the perfect storm,” she said. “Also, women have so many career choices now. When I was a young person, it was either nursing or teaching.”

Ten to 20 percent of the students in Germanna’s nursing program are men, Lisk noted.

Germanna graduates 120 to 130 nursing students a year, and nearly 100 percent of them find good jobs in the field, Lisk, who is a registered nurse, said.

“To me, that’s really phenomenal,” she said.

Germanna recently changed its nursing curriculum to a concept-based model that emphasizes critical thinking skills which are different than those in the traditional medical model, Lisk said.

Virginia began developing the curriculum in the past three years, Lisk said. About half of the states use it.

Germanna students’ success on the NCLEX exam Indicates that it is succeeding in training nurses to fill the skills gap locally, college spokesman Mike Zitz said.

Germanna has about 13,000 students, including those in degree programs and workforce training. The college serves Culpeper, Orange, Madison, Stafford, Spotsylvania, Caroline and King George counties and the city of Fredericksburg.

In recent years, Germanna has been Culpeper County residents’ preferred college for enrollment, educating more than 1,000 students from Culpeper annually.