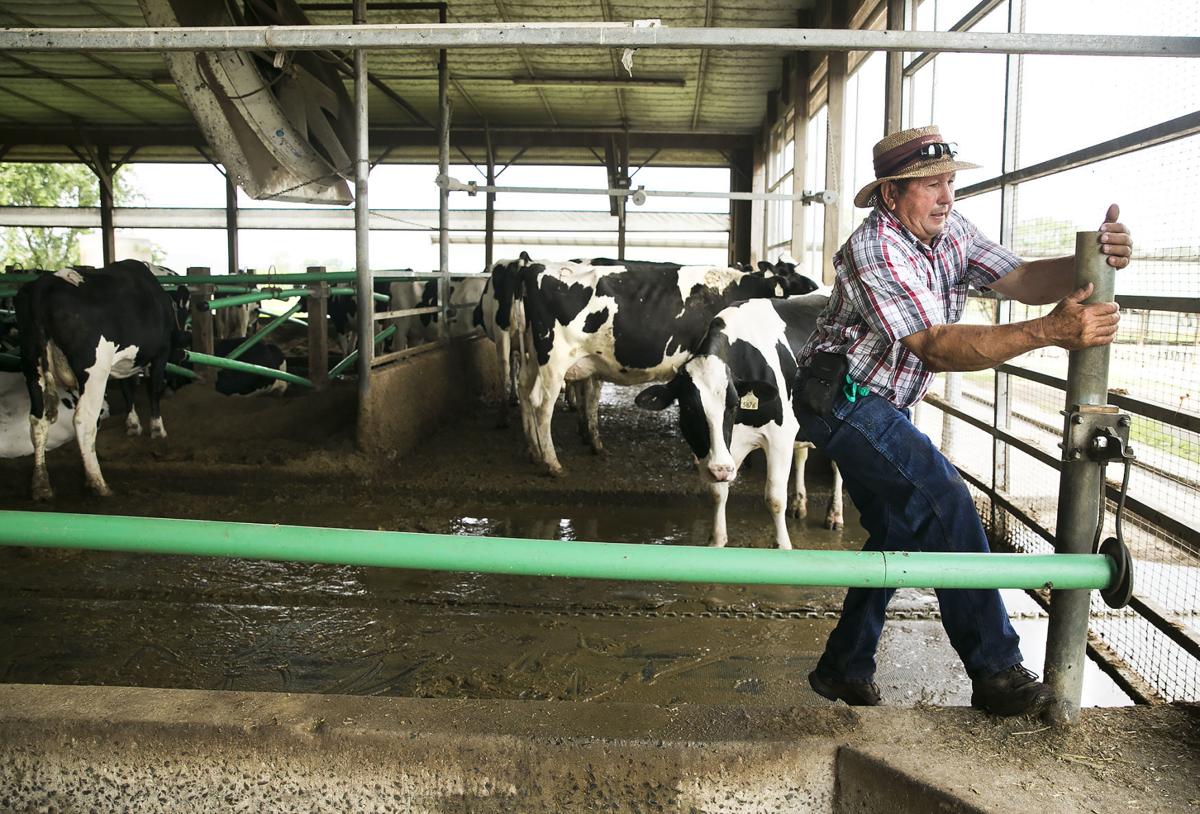 Ken Smith’s dairy farm in Remington produces about 6,000 gallons of milk each day. 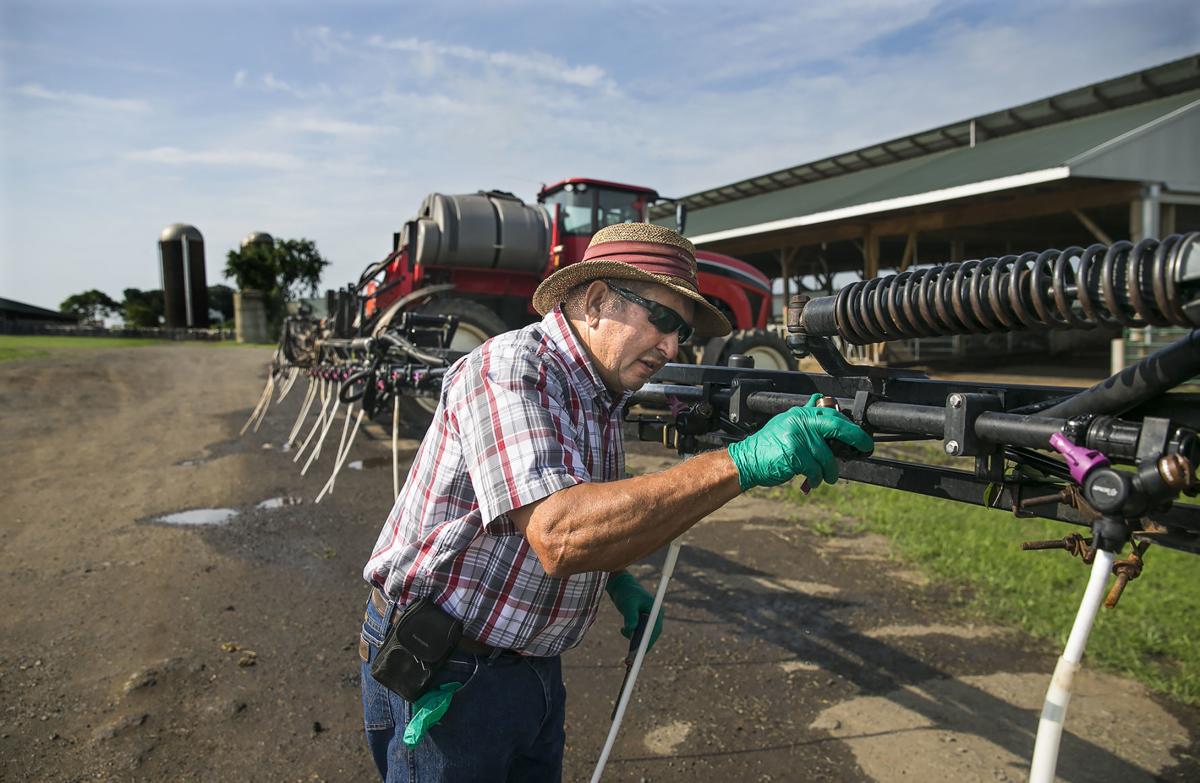 Ken Smith of Fauquier County checks a sprayer before fertilizing the corn crop he’ll feed to cows at his dairy farm in Remington. 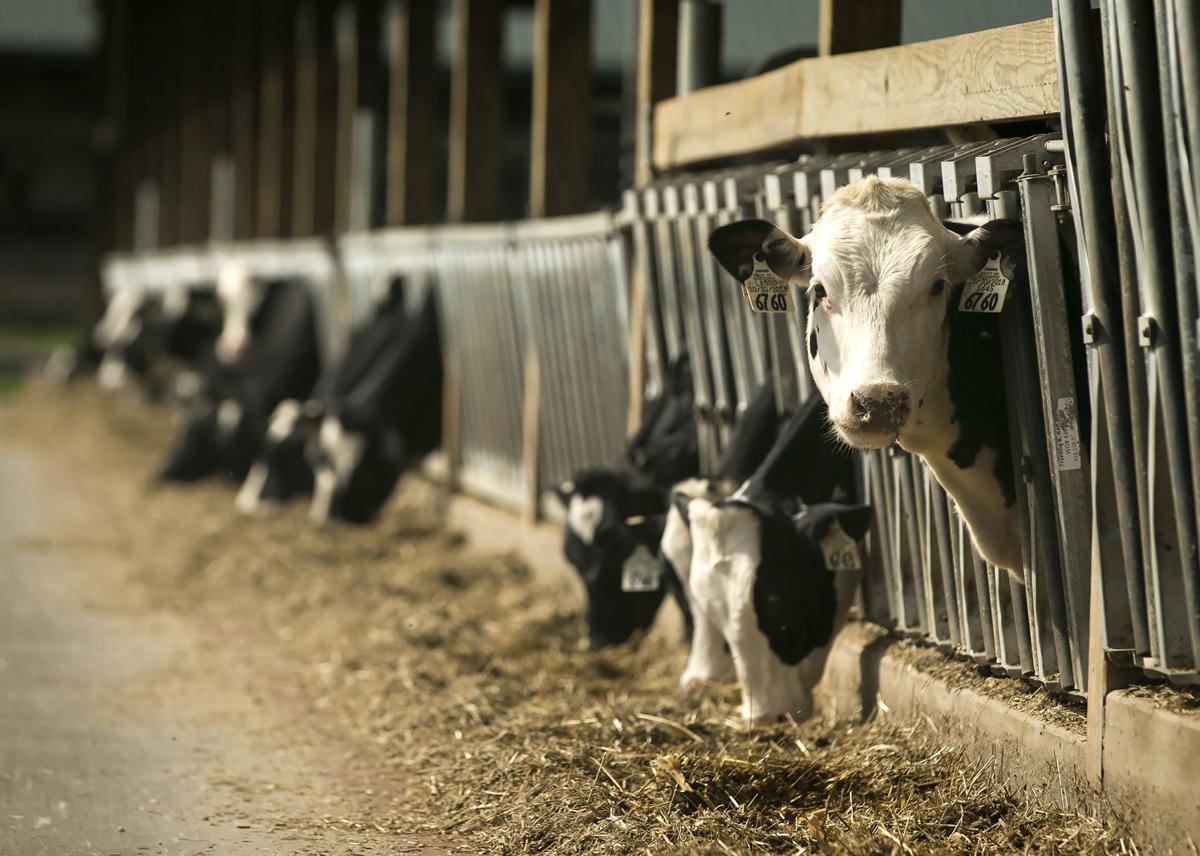 Smith has 1,600 Holsteins at his Cool Lawn Farm, but a drop in demand for milk and lower prices are squeezing his operation. 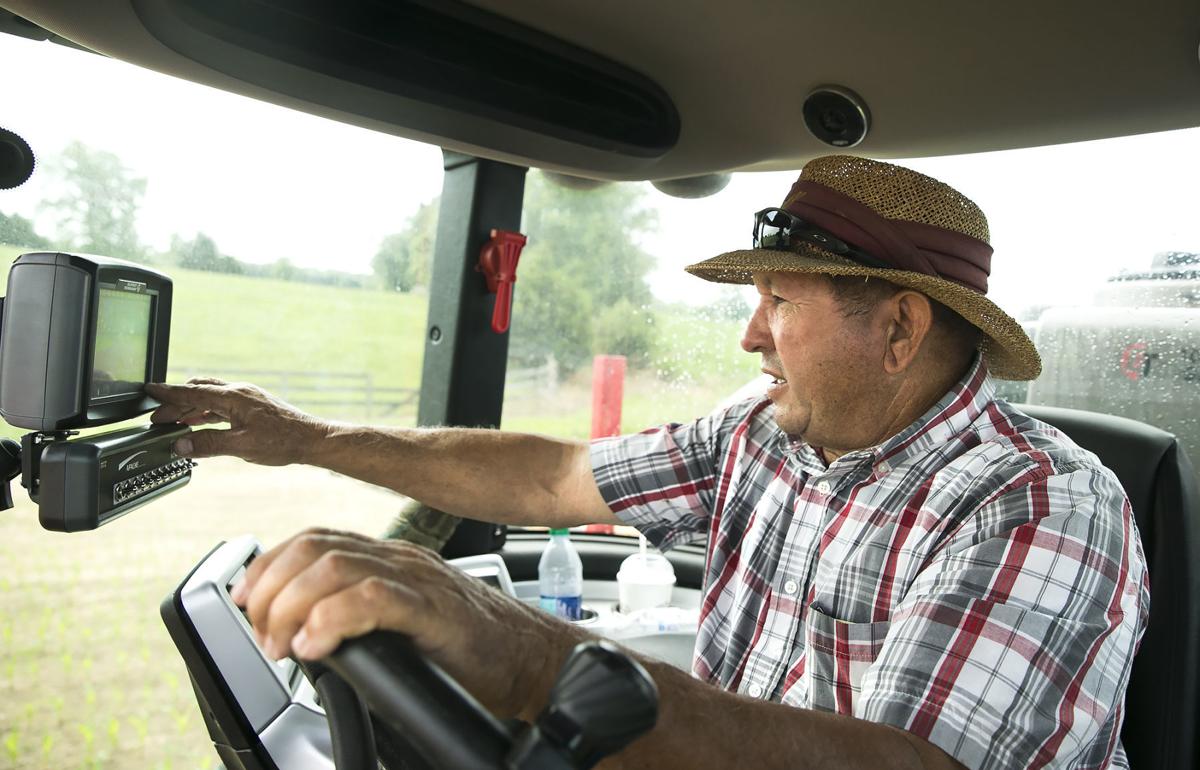 TOP: Smith programs a GPS on his tractor. He’s the fourth generation in a family of dairy farmers dating back to 1909. 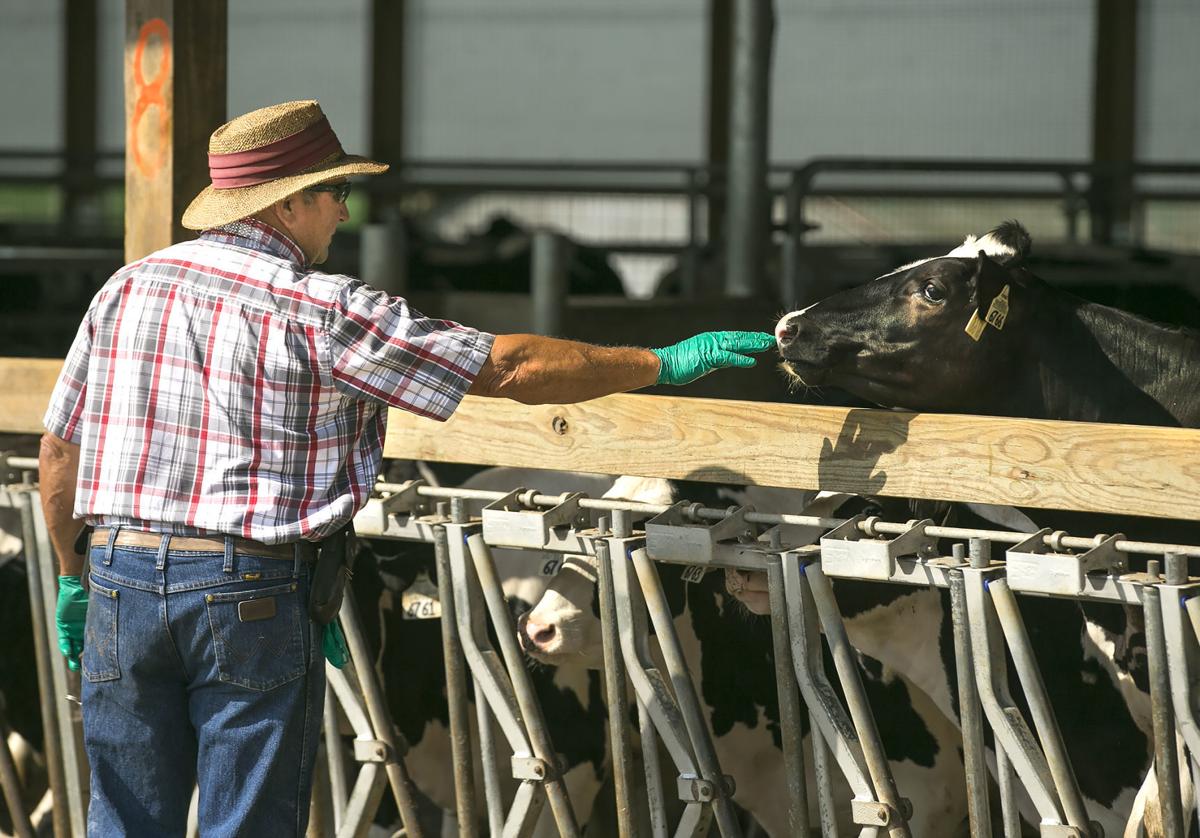 Smith considers his dairy cattle family. ‘I can trace them back to the 20 cows my father had in 1945,’ he says.

Ken Smith’s dairy farm in Remington produces about 6,000 gallons of milk each day.

Ken Smith of Fauquier County checks a sprayer before fertilizing the corn crop he’ll feed to cows at his dairy farm in Remington.

Smith has 1,600 Holsteins at his Cool Lawn Farm, but a drop in demand for milk and lower prices are squeezing his operation.

TOP: Smith programs a GPS on his tractor. He’s the fourth generation in a family of dairy farmers dating back to 1909.

Smith considers his dairy cattle family. ‘I can trace them back to the 20 cows my father had in 1945,’ he says.

When Ken Smith looks at his herd of 1,600 black-and-white Holsteins, he sees family.

“I know this one’s father is Wrench and this one’s mother is number 6793,” he said of the cow busily nosing at his hand on a recent Thursday morning. “I can trace them back 50 years to the 20 cows my father had in 1945.”

Feeding time was approaching for the herd at Cool Lawn Farm, Smith’s 1,200-acre dairy farm in Fauquier County. As the cow started licking his hand, Smith wondered if maybe she was extra hungry or just tasted something salty. Either way, he didn’t mind.

“I like everybody’s natures,” he said of his cows.

Smith is a fourth-generation dairy farmer—his great-grandfather switched from selling machinery to dairy farming in Harford County, Md., in 1909—but he didn’t intend to go into the business.

“[A dairy farmer] was the last thing I ever wanted to be,” he said with a laugh.

In college at the University of Maryland, he thought maybe he’d go into the restaurant industry. Then his uncle needed help milking the cows at his dairy farm and Smith found that he liked it.

“I just liked being with cows,” he said.

The Smith family has now farmed at Cool Lawn since 1970—almost 50 years. But last year, “with the rain that wouldn’t stop,” Smith thought seriously about quitting for the first time.

The miserable, wet weather combined with continued low milk prices and decreased demand for fluid milk to make Smith question the future of his family business.

“It was fine until the last five years,” Smith said. “Those have been the worst.” “But the thing about farmers is that we’re optimists,” he said. “There’s always another year. We hope things will get better.”

June was National Dairy Month, but it was difficult for Virginia’s dairy farmers to find a reason to celebrate.

Americans are drinking less milk than ever before. The average annual consumption of milk per person has plummeted from 247 pounds in 1975—shortly after Smith’s father started farming at Cool Lawn—to 149 pounds in 2017, according to the USDA.

“We’re living in a fragmented society,” Smith said. “People aren’t eating breakfast at home as a family anymore. The family unit is broken.”

And while demand for fluid milk has fallen, supply has not.

“For a producer who is milking a cow, it’s not like you can turn a spigot off,” said Tony Banks, assistant director of commodity marketing at the Virginia Farm Bureau. “That milk is coming in every day, two or three times a day, whether you are ready or not.”

The Federal Milk Marketing Order was created in the 1930s to regulate milk prices because unscrupulous milk dealers were using dairy farmers’ urgency to move their milk supplies to force them into accepting low prices, Banks said.

Milk pricing is based on a complex formula that establishes a minimum market price for fluid milk. Right now, the weighted average price of fluid milk for the entire country is $17.70 per hundred pounds of milk, or hundredweight.

According to the Bureau of Labor Statistics, the average store price of a gallon of milk has also fallen since then, from a high of about $3.80 in December of 2014 to about $2.96 in May of this year.

“This is probably the third downturn in prices for dairy since 2007,” Banks said. “From September of 2014, we have been in an extended decline—and it was already going to be a long recovery before any of the trade issues of 2018 came around.”

While prices continue to stay low, the cost of everything else involved with operating a dairy—supplies, feed and fuel—has gone up.

Smaller dairies are feeling the effects even more. Dairies with between 100 and 199 cows—the size of most of Virginia’s dairy farms, Banks said—lose an average of $7.18 per hundredweight of milk.

As a result, Virginia’s dairies are dropping like the flies on their cattle.

“Statewide, we are losing a dairy farm a little more often than once a week,” said Elaine Lidholm, director of communications for the Virginia Department of Agriculture.

According to the Virginia Farm Bureau, there are about 450 Grade A dairy farms—farms that produce milk for fluid consumption—in the state.

There are no remaining dairy farms in Caroline, King George or Stafford counties. Spotsylvania has two—one cow dairy and one goat dairy.

There are seven dairy farms in Culpeper, four in Orange and 13 in Fauquier.

“When we moved [to Fauquier], there were 127 dairy farms,” Smith said.

When a dairy farm goes out of business, it’s a loss to the local economy.

A 2015 study for the Virginia Department of Agriculture by the Weldon Cooper Center for Public Service found that the state’s dairy industry accounted for $2.298 billion in total output, 7,875 employees, $451 million in value-added and $159 million in labor income.

“That study was conducted when prices were up, but the relationship remains whether the values are as high as they were in 2014,” Banks said.

Smith employs 17 people at Cool Lawn Farm. His caretaker has worked there for 15 years and his herdsman for 20 years.

His son, Ben, works there as well and hopes to keep the family business going.

“[Dairy farmers] are all just trying to survive for the next generation, and that’s a terrible way to do business,” Smith said.

A ‘PITTANCE’ OF SUPPORT

Several national and state measures have been introduced to help the dairy industry since 2014.

“In the past couple of recent farm bills, there have been some programs that have come about to allow processors and producers to enter into pricing contracts that were outside the federal order system,” Banks said. “But there’s still a requirement, especially on the fluid side, that the contract has to meet a minimum federal price.”

The 2018 Farm Bill authorized a new Dairy Margin Coverage program, a voluntary program that provides financial protection to dairy producers when the difference between the milk price and the average feed cost falls below a certain dollar amount selected by the producer.

Payments are triggered each month this occurs. According to the Farm Bureau, payments were triggered in January, February, March and April this year.

But Smith said the payments under this program have been “a pittance.”

“They’re so small, they wouldn’t even take care of freight,” he said.

Last year, the Virginia Department of Agriculture conducted a study to see if the state’s dairies produce enough fluid milk to support a regional processing facility for cheese, yogurt or other products.

The results showed that Virginia could support such a facility. This would provide dairy farmers with another market for selling their milk outside of the federal order.

“We have localities that are interested in a facility like that,” Banks said. “The state is not going to build a cheese plant—it’s up to the private sector—but hopefully we can attract a manufacturer to Virginia.”

“And some have been quite successful,” he said. “With the local food movement, now is certainly a time to give consideration to those activities—if that’s something that fits into your farm plan and you have the ability to make that investment.”

STUCK IN THE MIDDLE

At Cool Lawn Farm on a recent rainy morning, more and more cows left the piles of hay where they were resting to move leisurely to the front of their barn.

A truck full of feed was approaching and they knew what time it was.

Smith left the barn and walked down the hill to where an empty milk transport truck was parked in front of the milking parlor. He attached the hose running from the giant milk storage tank and started filling the empty truck with milk.

It had already made one run that morning to the processing plant in Newport News owned by the Maryland and Virginia Milk Producers Cooperative Association—of which Cool Lawn Farm is a part—and would make at least one more that day, Smith said.

With 700 cows going through the milking parlor three times a day, Smith said he sends about 6,000 gallons of milk daily to the plant.

From there, it goes mostly to Food Lion and Giant stores along the east coast. Milk from the Newport News processing plant is also sold locally under the Maola brand.

If Virginia’s dairy farms keep going out of business, Smith said, milk considered “fresh” will have traveled for five to seven days across the country before it hits shelves.

“Do you want your milk coming from Texas or Indiana?” he said.

Smith said he is “no activist,” but he’s frustrated with the way milk prices and exports are regulated.

The U.S. exports milk to China, Europe and Africa, and Smith said the export market is growing as countries improve their economies and diets. But tariffs are cutting into profits.

“The government could stop interfering with the balance of trade and continue to allow dairy to be a free-market system,” he said. “Instead of putting tariffs on exports, it could do more to balance trade.”

“Dairy farmers haven’t been able to earn an income and grow in a fair way,” he continued. “The U.S. is not the same country it was 50 years ago. People are moving to the coasts for more convenience and entertainment. We’re being left in the middle to feed the nation and we’re having a hard time doing that.”