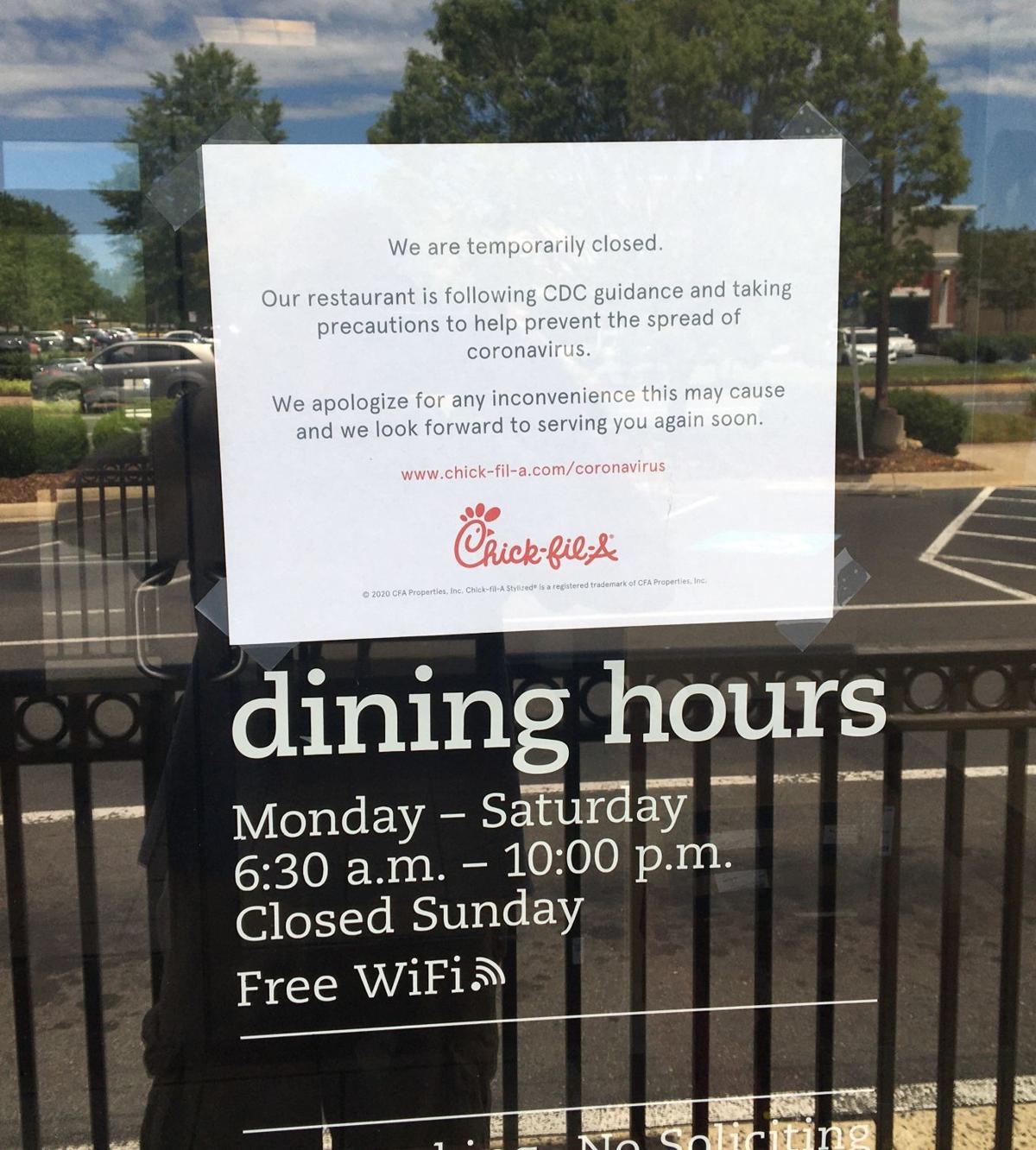 A sign on the door of the Chick-fil-A notifies customers that the popular Central Park fast-food restaurant is temporarily closed. 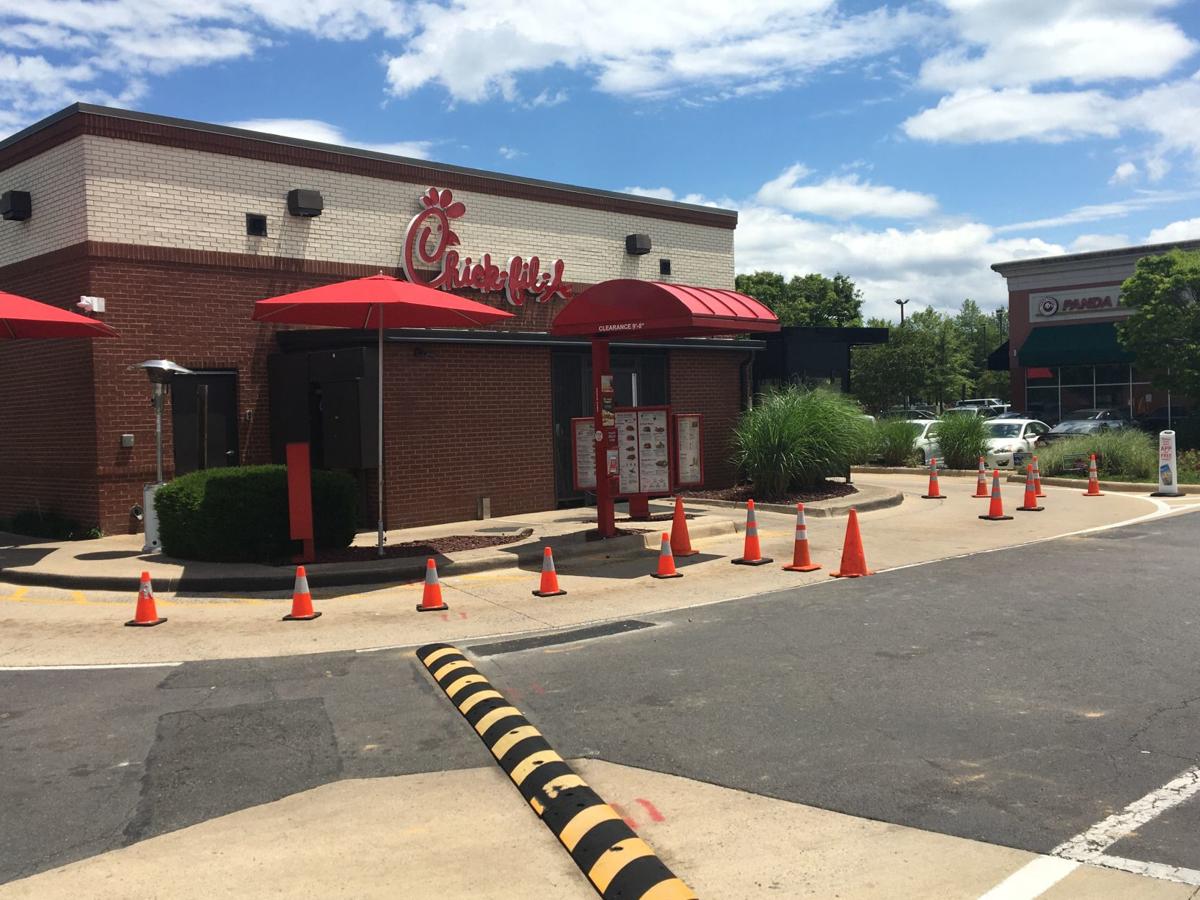 The Chick-fil-A in Fredericksburg’s Central Park has temporarily closed and blocked its drive-thru lanes.

A sign on the door of the Chick-fil-A notifies customers that the popular Central Park fast-food restaurant is temporarily closed.

The Chick-fil-A in Fredericksburg’s Central Park has temporarily closed and blocked its drive-thru lanes.

Instead of vehicles wrapped around the building at the Central Park Chick-fil-A, orange cones blocked the drive-thru Friday night and Saturday, and signs explained the business was temporarily closed “to help prevent the spread of the coronavirus.”

On Tuesday, the store’s management told employees that a team member had tested positive for COVID-19. The announcement was shared with The Free Lance–Star and stated that owner Todd Fleming and the Rappahannock Area Health District recommended that anyone who was exposed should self-quarantine for 14 days.

Chick-fil-A’s corporate office confirmed the positive case, “initiated the response protocol and took precautionary measures, including disinfecting and deep cleaning,” according to the statement.

When the ever-popular business shut down Friday night, so did the response from Chick-fil-A. “We have nothing else to add outside of the statement sent earlier this week,” the statement read.

Various Facebook posts showed the darkened business and empty parking lot—and claimed that four to six workers had been sickened by the novel coronavirus. The Virginia Department of Health considers two cases or more involving the same person, place or time an outbreak—and mandates they be reported.

As of Saturday, the local health district hadn’t reported a new incident in a store setting.

However, it did report another outbreak at a long-term care facility, which marks the eighth local outbreak to date. Four staff members and two residents at a small, unnamed residential facility tested positive for the virus, according to the RAHD.

It was the third outbreak in a long-term care facility; one happened at Heritage Hall nursing home in King George County and the other at an unidentified small group-type home.

Sixty people have been infected with the virus as a result of the eight outbreaks. Health officials, working with the National Guard, last week started testing staff and residents at the 21 long-term care facilities in the local health district, which includes Fredericksburg and the counties of Caroline, King George, Spotsylvania and Stafford.

The facility where the most recent outbreak occurred was not among those tested, said Allison Balmes–John, spokesperson for the local health district.

Some small group homes house adults with developmental disabilities who are unable to live on their own. In a report about the impact of the virus on local nonprofits, Lacey Fisher, a coordinator with Rappahannock Adult Activities, explained that people with such impairments are at greater risk for COVID-19 because they “may not have the mental capacity to understand handwashing and social distancing precautions.”

Meanwhile, the notice from the Central Park Chick-fil-A management to its workers told employees not to post anything about the case on social media and to encourage guests with questions to contact corporate public relations.

“We do not want to create panic amongst the guests in our area or local media,” the store statement read.

It also directed employees to inform a team leader if they experienced any flu-like symptoms, especially fever or respiratory issues, and stated that self-quarantining “was not a requirement but is the official recommendation.”

Balmes–John wouldn’t comment on the Chick-fil-A case, but spoke in general terms about action taken after a positive test by a business employee. She said health officials contact an employer and help them identify other workers with an increased risk of exposure. Letters and information are provided by health officials, she said, both for those who are close contacts of the infected person and those who have a lower risk of becoming sick.

“It is recommended that employers provide information to all employees about what steps to take to keep themselves safe,” she wrote in an email. “Any such information should be clear in the actions recommended to employees, including how to monitor for symptoms, when to stay home from work and who to notify.”

As of Saturday, there were 1,513 cases of COVID-19 in the Rappahannock Area Health District. There were 702 cases in Stafford County; 524 in Spotsylvania County; 158 in Fredericksburg; 65 in King George County; and 64 in Caroline County.

Elsewhere in the region, there were 674 in Culpeper County; 312 in Fauquier County; 101 in Orange County; and 63 in Westmoreland County.

Virginia reported 43,611 cases and 1,370 deaths associated with the virus.

WHO TO CALL ABOUT LACK OF MASKS

People have asked what they should do if they see others not abiding by Gov. Ralph Northam’s order to wear face coverings inside public buildings and businesses.

Information from the Virginia Department of Health stresses that it is not “in the business of policing Virginian’s everyday activities” and that the order about face coverings is a matter of public health, not a criminal matter.

But for those who feel the need to contact someone, the state health department advises:

The state health department reminds people that police officers should only enforce secondary violations, such as trespassing, disorderly conduct or inciting a riot. It also says the order is not enforceable outside.

“VDH will only take action on willful egregious violations of the order, according to its website.

More issues are addressed on the state website at vdh.virginia.gov/coronavirus/frequently-asked-questions/phase-1-safer-at-home/.