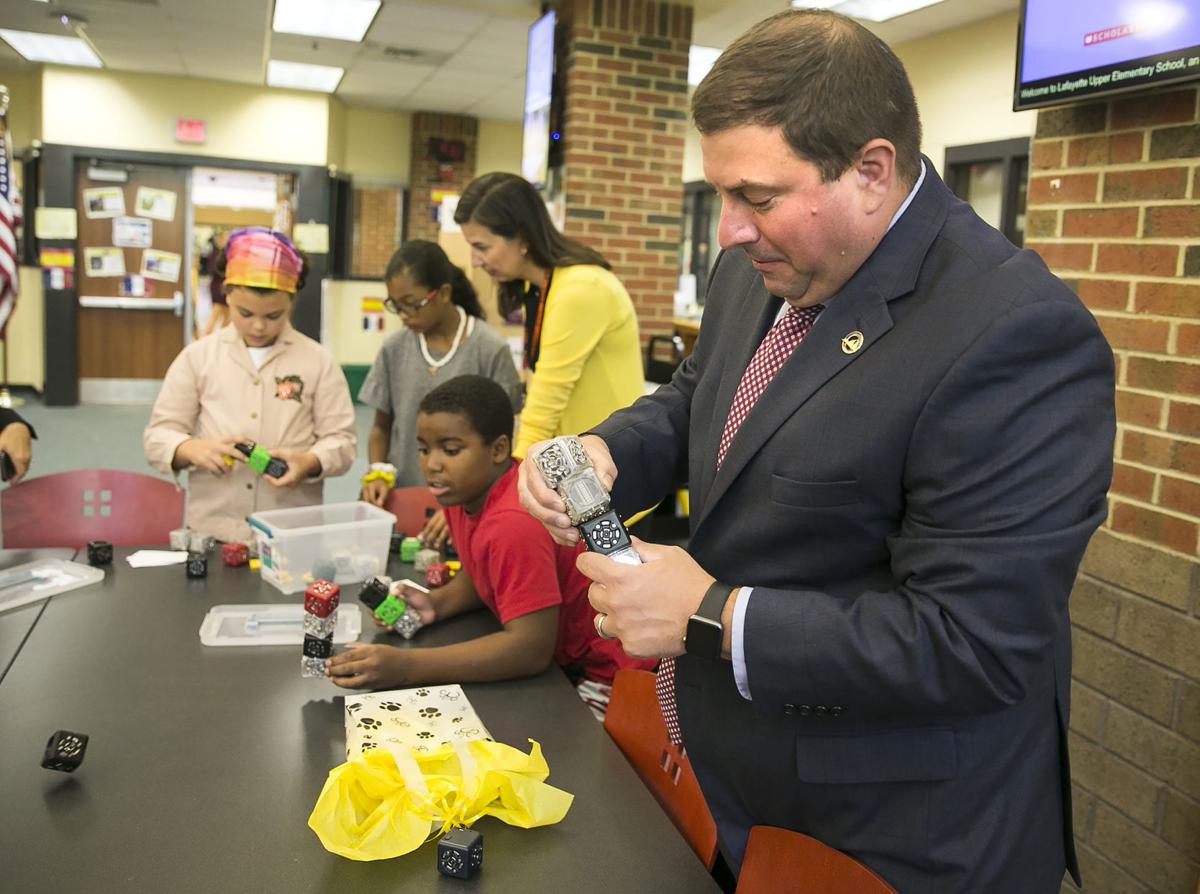 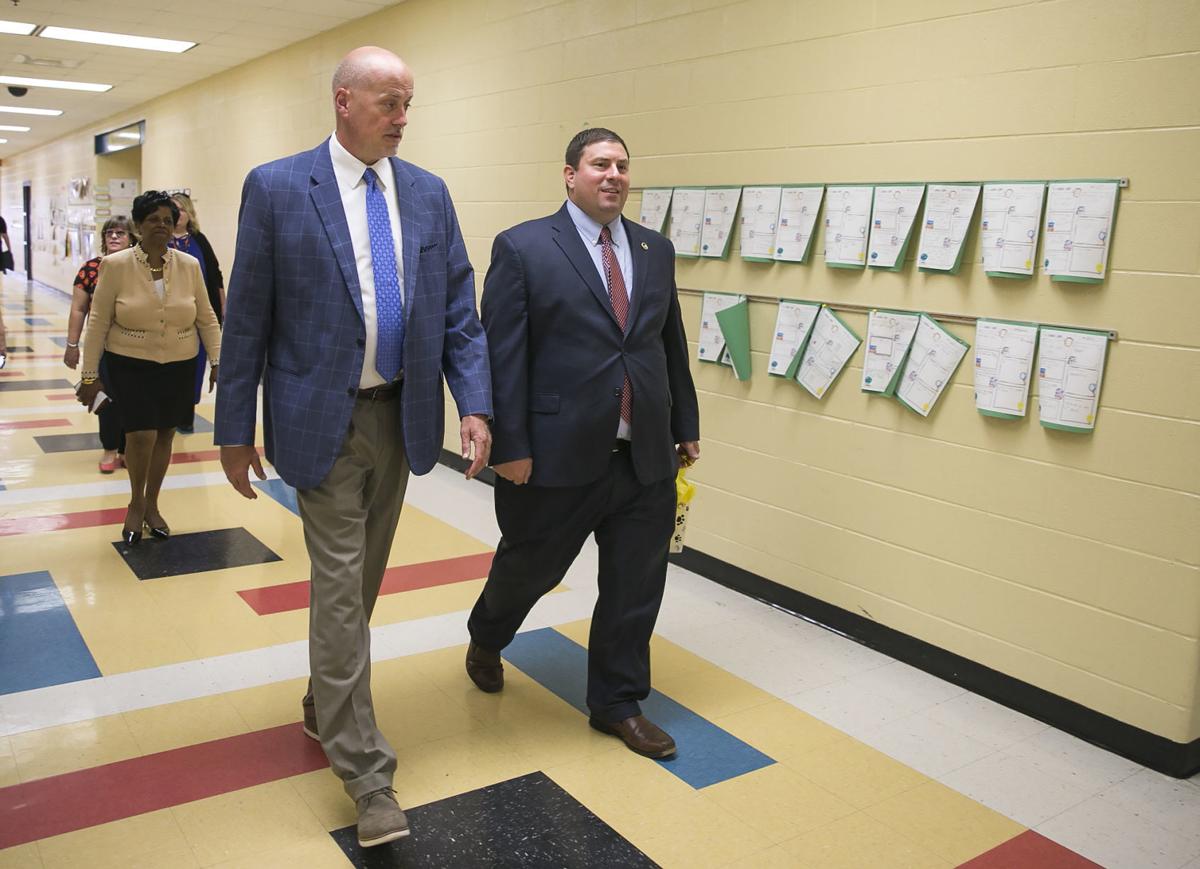 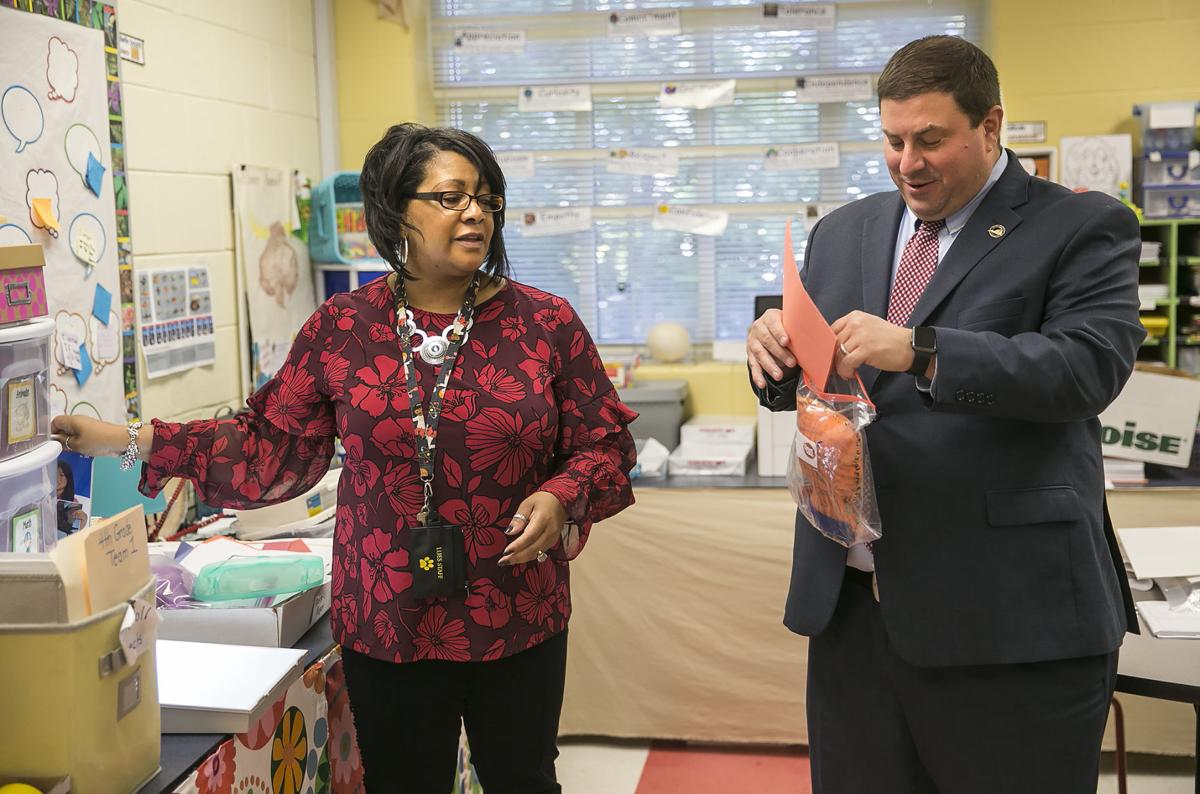 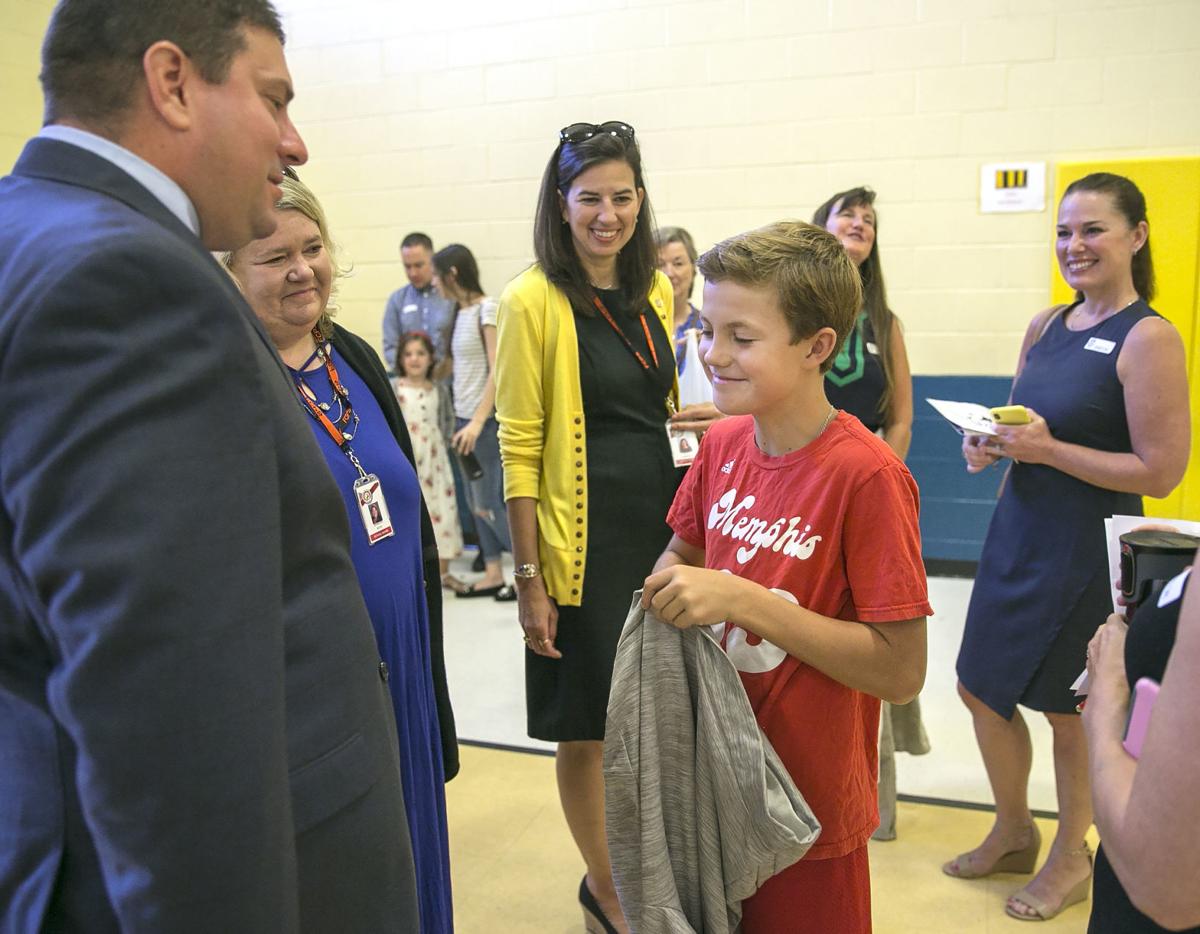 A miniature robot was chirping loudly as state Superintendent James Lane tried his hand at building one out of Cubelets in Lafayette Upper Elementary School’s library.

Three fifth-graders helping to give him a tour of the Fredericksburg school Thursday had demonstrated how the Cubelets, which are used to teach coding, snap together. Different cubes perform different functions, from volume control to forward motion to spinning Legos attached to an adapter plate.

Lane snapped several small building blocks together and sent his robot chugging across a library table.

Daria Smith, the student leading the tour, also demonstrated the library’s digital catalog; and Lane got to virtually push land in an augmented reality sandbox to make a mountain.

“Do you use an Xbox for this?” he asked.

Michelle Silvestri, Lafayette’s librarian, said that several staff members created the sandbox out of an Xbox and other off-the-shelf parts after watching a YouTube tutorial. Students can use the sandbox to learn about such topics as erosion and plate tectonics.

School Board member Jannan Holmes, who was taking part in the tour along with other school officials, told Lane that she was amazed at how different the library has become since Silvestri turned part of it into a maker space this year.

“It is so much more dynamic,” she said. “I’ve never seen people enjoy the library this way.”

Lane served as a division superintendent in Chesterfield, Goochland and Middlesex counties before Gov. Ralph Northam tapped him to become state superintendent of public instruction in 2018. Since then, he’s made it a personal goal to visit each of Virginia’s 133 school districts to meet school officials and staff, see first-hand what their schools are doing, and answer questions.

His stop at Lafayette was the first of three visits to area localities Thursday. The others were Caroline High School and Acquinton Elementary School in King William County.

Besides the library, Lane’s tour at Lafayette included a stop in Lisa Lewis’ classroom, where the gifted intellectual resource teacher showed off the handmade dolls and stories her students had crafted. They’re going in some of the 80 shoe box-sized Jared Boxes that will be donated to pediatric patients at Mary Washington Hospital. MWH is one of hundreds of hospitals across the country that participate in the Jared Box project, which was named after a 5-year-old who carried a backpack full of toys and games to all his appointments while battling an incurable brainstem tumor.

Lewis said that she had to teach the third-graders in her class how to sew to make the dolls, some of which are given to kindergartners to help with their reading skills.

“Some of my students do have disabilities,” she told Lane. “If some of their stitching was off, it gives the doll more personality.”

Lewis added that her students decided to write the stories included in the box instead of buying books to include in the Jared Boxes. Lane asked if he could read one, and was delighted to see that three students had created a super hero for it.

The superintendent also saw the school playground, which got a GaGa ball pit in August. School Board member Kathleen Palmeroy told Lane that she’d seen one at her children’s summer camp, and thought that the game was so much fun that it should be offered at Lafayette and Hugh Mercer Elementary School.

GaGa, which means “hit” or “touch” in Hebrew, is played with a lightweight bouncy or foam ball inside an octagonal enclosure called a pit. The object of the game is to hit the ball at or below opponents’ knees to eliminate them from the pit. Children of any age, size or athletic ability have the same chance to win as anyone else.

Lane then attended the end of an assembly for the installation of new Student Council Association officers, and chatted with some of the students and their parents during the reception.

“It’s very clear that the school is incredibly focused on student creativity and engagement,” he commented.

Afterward, Lane met with just Lafayette Principal Courtney Wheeler, interim Superintendent Marci Catlett, Personnel Director Jon Russ, School Board chairperson Jennifer Boyd and the two other board members on the tour. He wanted to hear about the city school system’s needs, and Pomeroy told him that Fredericksburg needs another elementary school. Hugh Mercer has 987 students and Lafayette has 800.

Lane wanted to know if there was anything else they needed money for, and Holmes said that they could use more social workers.

“Guidance counselors are wonderful,” she said, “but they don’t make home visits.”

Lane said that the Virginia Board of Education discussed revising one of its Standards of Quality at its last annual retreat to include four social workers for every 1,000 students.

“For a school like this, that’s four possibly,” he said. “The board is definitely looking for feedback.”’

Lane said that it’s possible to hire people with the requisite experience while they work on getting their credentials. Catlett said that the school system is preparing to start a Virginia Teachers for Tomorrow program, which identifies, trains and nurtures juniors and seniors interested in a teaching career.

Boyd said later that she thought Lane’s visit was great because it showed that he’s interested, and such visits “keep it real” for state school officials who are no longer in the classroom or a school on a daily basis.

“They’re working for the schools, but are not in them,” she said. “It helps to keep them grounded as well.”