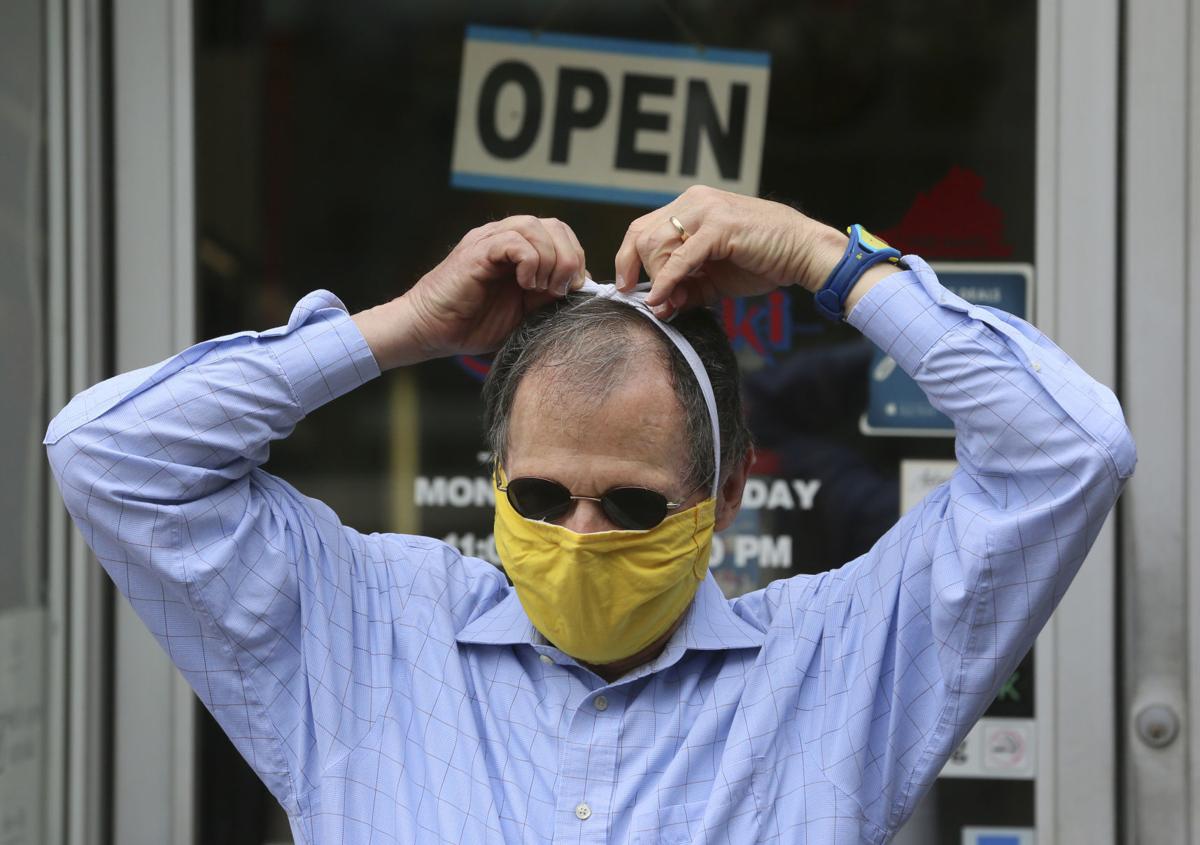 Ed Champion of Blacksburg adjusts his homemade mask after placing a to-go order in Roanoke on Friday. Champion said he has been wearing a mask when going into business establishments since March. 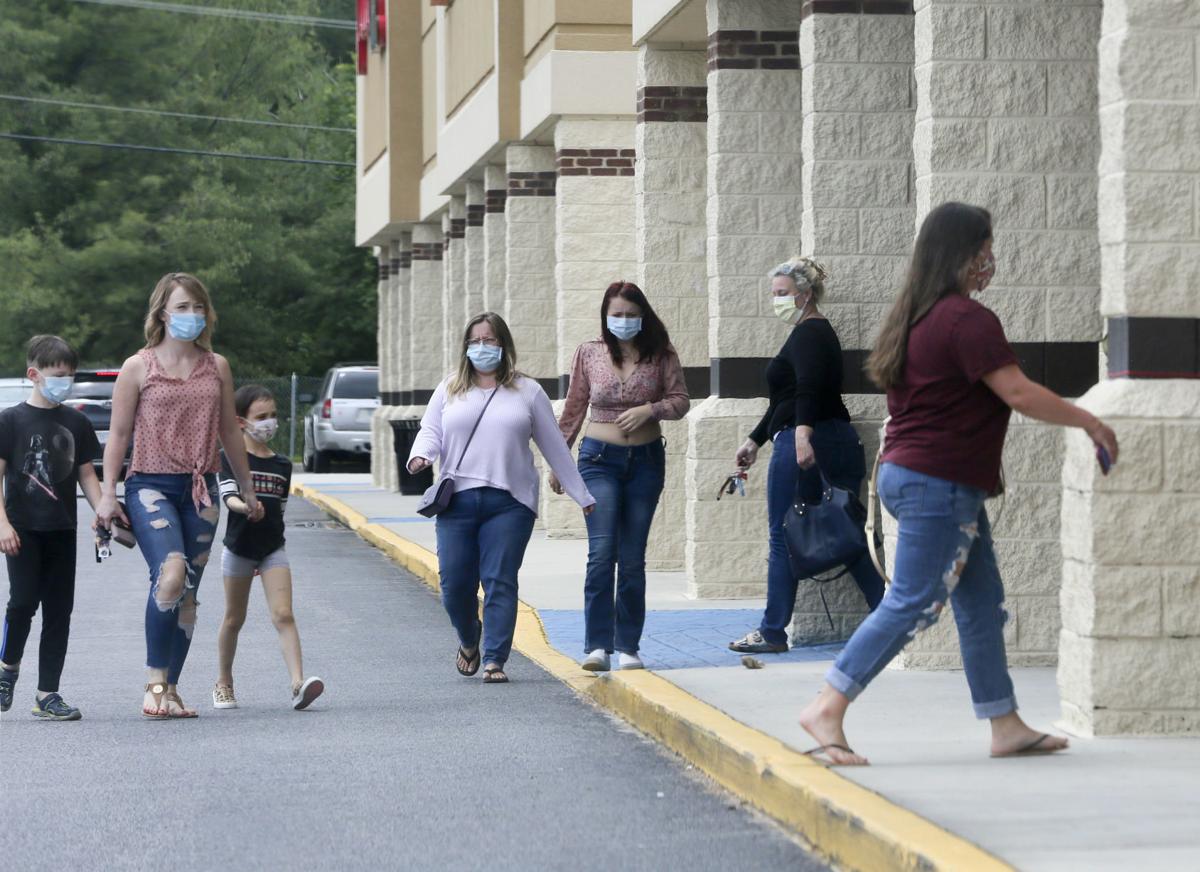 Shoppers were, for the most part, wearing masks around midday Friday at the Spradlin Farm Shopping Center in Christiansburg.

Ed Champion of Blacksburg adjusts his homemade mask after placing a to-go order in Roanoke on Friday. Champion said he has been wearing a mask when going into business establishments since March.

Shoppers were, for the most part, wearing masks around midday Friday at the Spradlin Farm Shopping Center in Christiansburg.

It got just a bit harder Friday to find a smile—or a frown. But a certain number of eye-rolls were easy to spot.

As Gov. Ralph Northam’s executive order to wear masks in most indoor public places took effect, Roanoke and New River Valley residents wrapped their faces as a precaution against spreading the new coronavirus. In businesses that were open, workers and customers mostly were covered to the eyes, and some were not too pleased about it.

“I do not live in fear. I have a God that’s bigger than fear,” said Catrina Smith, 42, assistant manager of the Tractor Supply Company in Pulaski.

Saying she disagreed with the governor’s order partly because Pulaski County has seen relatively little COVID-19—just 19 total cases and zero deaths, according to Friday’s listing on the Virginia Department of Health website—Smith noted that employees at Tractor Supply Company have had to shield their faces at work for months.

Laughing, she displayed her own mask, emblazoned with a Trump 2020 campaign logo. The president, of course, has been reluctant to don a mask.

Smith said that she was not going to push customers. Of the half dozen or so people in the aisles of her store around midday Friday, about half wore no masks.

“I’m not going to get in a fight with someone,” Smith said.

Masks were more evident at the Kroger in Blacksburg’s Gables Shopping Center. Well over 90 % of the people there wore a face covering at midday. In the parking lot, Michael Martin, 75, loaded groceries in his car, still wearing his mask. He said he’d worn masks in public settings for months.

“I’ve been wearing them when I go out because my wife is immunocompromised and I think it’s part of being a good neighbor,” Martin said. “I’m not necessarily worried about myself, but I don’t want to get anyone sick.”

Visits Friday to Home Depot and Target in Christiansburg, and to other Kroger locations, showed similar high proportions of masks.

At noon at the Walmart in Dublin, in Pulaski County, fewer than a dozen people could be spotted without masks in the store. Large signs at the entrances, flanked by masked employees, asked customers to cover their faces—though people without masks still entered.

In the parking lot, Kevin Bower, 43, of Dublin had a black cloth mask pushed down around his neck. He said he had worn it inside—and wore a mask at his job at the Radford Army Ammunition Plant.

He said he thought masks could protect people but still disagreed in principle with the governor’s order because he thought it went beyond what government should be able to require.

At Roanoke’s Towers Shopping Center, most customers coming and going from The Fresh Market wore a face covering, whether surgical-style mask or bandana. The store had already been asking customers to wear masks before the governor’s order.

“The Fresh Market is asking our guests to support this policy for the benefit of our team members, other guests and the community,” said Meghan Flynn, a spokeswoman for the grocer.

To avoid putting employees in confrontational situations, Flynn said customers without masks have not been denied entry.

Brett Booher of Wythe County, in Roanoke for a doctor’s visit, had no problem wearing a mask into The Fresh Market. “The governor’s just trying to protect us from ourselves,” Booher said.

Nancy Gray of Roanoke said the formal mask requirement might make venturing out a bit safer, though she acknowledged it’s difficult to enforce. “I think it’s a way that we can help each other,” Gray said.

The mask order is to be enforced by the health department. Marissa Astor, a spokeswoman for the governor, wrote in an email Friday that this would be through a court order, punishable as a Class One misdemeanor. It is envisioned that only egregious violations would be addressed this way, Astor wrote.

Northam “does not want to put anyone in jail over this,” Astor wrote. “We hope and expect Virginians will work together to comply with these important guidelines.”

At Doomsday Tactical Supply in Roanoke, owner Mark Williams said he thought the governor had overstepped.

“As a business owner, I think it’s going to hurt people’s business because people who don’t want to wear a mask are not going to shop there,” Williams said.

A sign on the door of Williams’ gun shop noted customers with medical conditions that prevent them from wearing a mask are exempt from the governor’s order. The sign said employees will assume customers without masks have such a condition.

Speaking by phone, Williams said that when he looked around late Friday afternoon, he saw only one of about a dozen customers was wearing a mask.

In downtown Blacksburg, Ed Champion, 68, got takeout at Souvlaki while wearing a yellow, homemade face covering. The town resident said his wife volunteers with a group that sews masks, and that he had been wearing one since early in the pandemic.

“I’m over 65, so I’m in the susceptible group and I don’t want to overburden the hospital system. So yeah, I take precautions, but I don’t think I’m fanatical about it,” Champion said.

Additionally, since people can have COVID-19 without showing symptoms, wearing a mask protects others, Champion noted.

He said that for many people, masks obviously have dimensions beyond the medical.

“I think this mask wearing is very cultural in addition to political,” Champion said. “Here in Blacksburg, we’re an island of big city liberals in a great sea of mountain folk who are very conservative and have lived here for generations.”

Champion said that when he picked up fish from a distributor in a Blacksburg parking lot, customers wore masks. But the same day at a hardware store in Christiansburg,

workers wore masks but no customers did, Champion said. “On my way out a few guys were smiling at my mask and one guy did a fake dry cough,” Champion said.

At the Fleet Feet Roanoke store, owner Robin Lewis said 99% of shoppers have been happy to wear masks, which the store required when it reopened May 18. Only a handful have refused to comply, one of whom told her, “I’m not a Democrat.”

“The sad thing is it’s gotten political,” Lewis said. “This has nothing to do with politics to us. This has to do with the health and wellness of everybody who comes in our doors.”

In Floyd at A Little Monkey Business clothing and gifts store, owner Pam Helm said that she had previously heard customers grouse that mask requirements imposed on people’s rights—but that so far Friday, nearly everyone who visited the store was wearing one.

“One person came in without a mask—but they came in to buy a mask,” Helm said

The store has donated many face coverings in recent months , Helm added.

“It’s not about making money right now,” Helm said. “It’s about being safe.”

At a door into Helm’s store flew a flag with large letters that spelled “Freedom.” At the other door was a sock monkey wearing a mask.