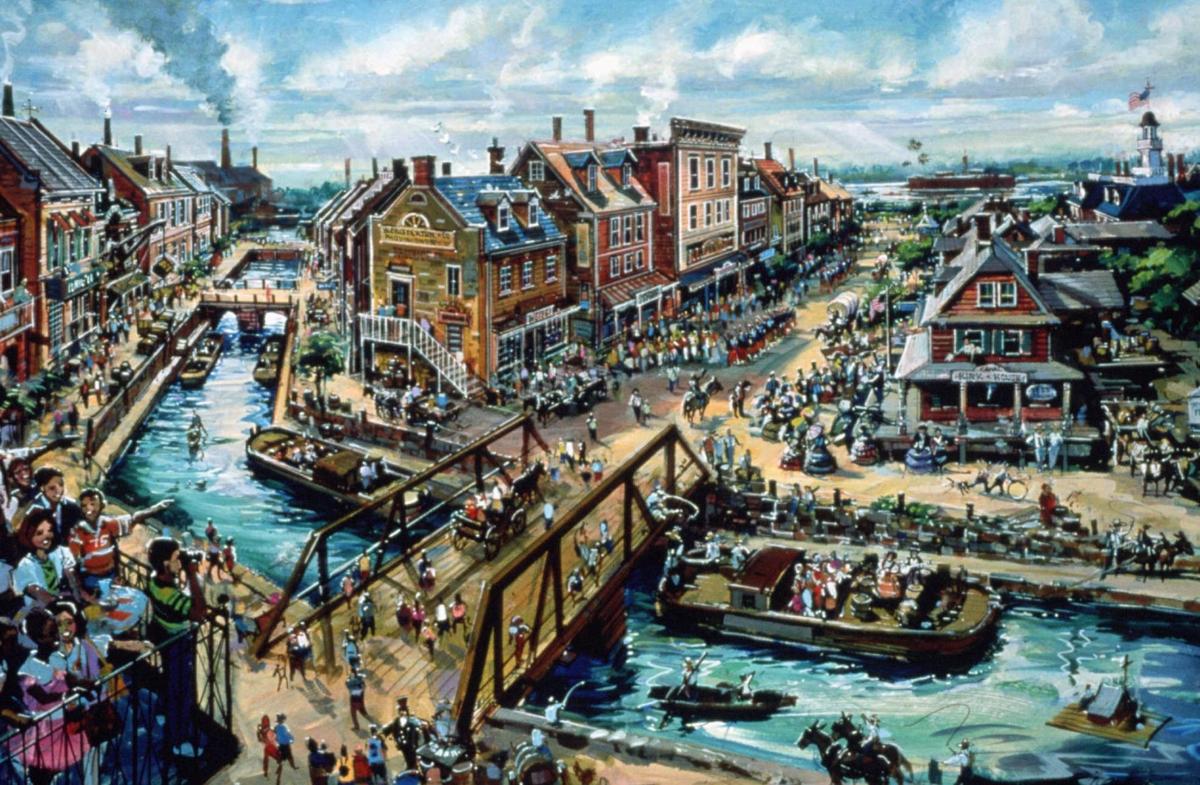 This artist’s rendering, released on Thursday, Nov. 11, 1993, shows the Crossroads USA section of the proposed Disney’s America theme park slated for Haymarket in Prince William County.Disney envisioned a park that would relive major parts of American history, at a site near a historic Civil War battlefield. 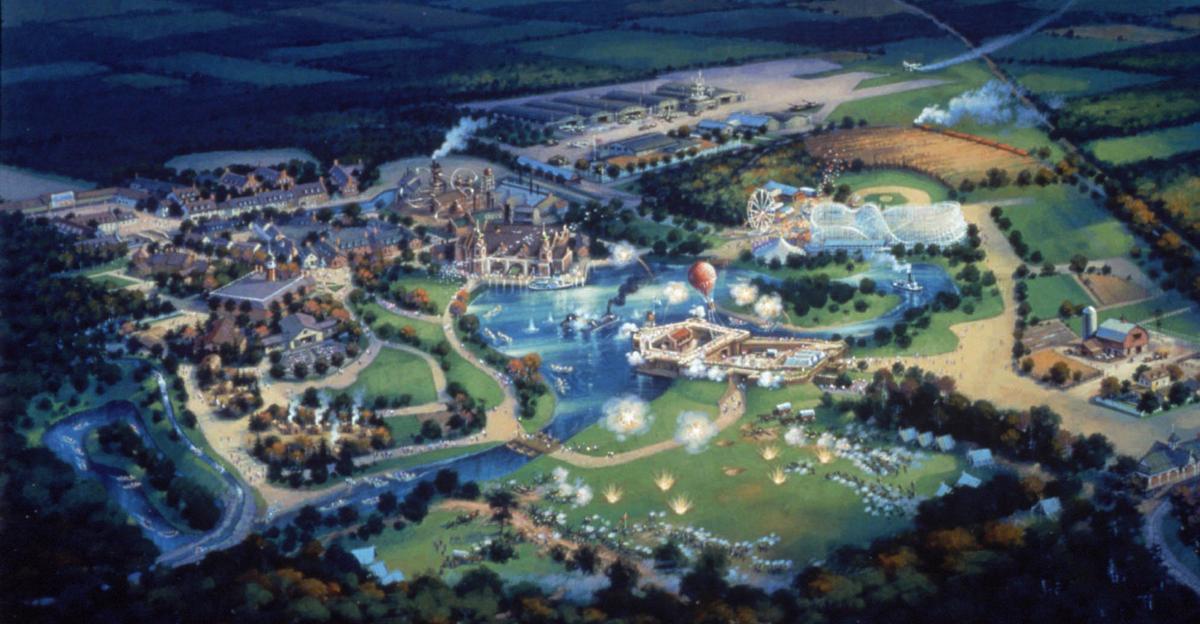 A rendering of what would have been Disney’s America, a history-based theme park in Haymarket in Prince William County.

This artist’s rendering, released on Thursday, Nov. 11, 1993, shows the Crossroads USA section of the proposed Disney’s America theme park slated for Haymarket in Prince William County.Disney envisioned a park that would relive major parts of American history, at a site near a historic Civil War battlefield.

A rendering of what would have been Disney’s America, a history-based theme park in Haymarket in Prince William County.

What would Mickey Mouse have to say about slavery?

That’s the question historians were asking 25 years ago, when the Walt Disney Co. was touting a $650 million theme park—centered around American history—just miles from Bull Run near Manassas, where the Civil War’s first major land battle was fought.

But in September 1994, almost a year after announcing its plan, the company abandoned it. There would be no Disney’s America, as the park was known. There would be no accompanying golf course, no 2,000-plus homes, no 2 million feet of commercial space.

In the charming time before online news and social media, Disney had quietly assembled a 3,000-acre tract around the Prince William County community of Haymarket. There, it envisioned a patriotic yet honest theme park with sections spanning Colonial settlement to 1945.

Though rooted in American pride, Disney Chairman and CEO Michael Eisner said of the park, the company’s Imagineers would not be afraid to touch upon more “painful, disturbing and agonizing” chapters of America’s history.

Could it have done so?

“I think Disney just didn’t want to take the bad publicity they were getting,” George Allen said in a recent interview. “This got a lot of attention.”

Allen, who was Virginia’s governor at the time, debated historians on CNN and spoke before a congressional hearing to defend the project’s economic development benefits, including new jobs and tourism. About 6 million visitors were expected to visit the park each year.

The state even approved an incentive package topping $160 million, and local officials seemed poised to approve zoning changes for the project.

But Disney was facing pressure abroad and at home. Euro Disney, which had opened near Paris in 1992, was struggling. And for Disney’s America, skepticism over the park interpreting sensitive aspects of the nation’s history was growing.

“What people found alarming about Disney, other than the fact that it was displacing a real historical place, was they were taking away something real and replacing it with something made up,” said Ed Ayers, a historian of the American South who, while at the University of Virginia, was among historians there who wouldn’t support the project.

Christy Coleman, CEO of the American Civil War Museum in Richmond, noted that over the past 30 years – which would include the era of Disney’s America – there has been a shift toward embracing the stories of native peoples and immigrant groups who have influenced the country’s social and political fabric.

The friction has created a cultural war over how we remember and interpret history, as historians have been more willing to reflect on historical injustices.

“At the heart of it, there’s a core issue among the public between wanting history to be indoctrination versus history being a process of critical thinking,” Coleman said. “When we hear these false narratives being repeated time and time again, it is a reflection of a desire to have control and to try reasserting the idea of American exceptionalism.”

Allen recalled that he was at Disney World in Florida with his family when Eisner, the company CEO, called him to pitch Disney’s America. Allen was excited, in part because job creation had been one of his campaign themes.

“I think it would have been beneficial to the state and the entire Northern Virginia area,” Allen said. “There would have been job opportunities and revenue for schools.”

With the prospect of 1,900 new jobs and nearly $50 million in annual tax revenue for the state, Allen’s sentiments were shared.

Kathleen Seefeldt, the chairwoman of the Prince William County Board of Supervisors at the time, said she remembers local officials spending months vetting the project, and many residents hoped it would succeed.

She said the controversy that Disney’s America generated seemed to be based largely on misinformation, as the project’s location was not actually on the Bull Run battlefield, as some claimed.

“It was an exciting opportunity for our tax base,” Seefeldt said. “At the time, we had the second-largest school system in the state. We needed more balance in the tax base ... and it was seen as a source for a lot of jobs.”

Debbie Jones had become CEO of the Chamber of Commerce in Prince William in 1993, the year Disney announced the project.

She said Disney created enormous excitement in the business community, especially with vendors the company was hiring to help establish a presence there. At a few events the Chamber organized, Disney sent Mickey and Minnie Mouse to help create buzz.

“It became very controversial really with outsiders,” Jones said. “If you were checking around in those years locally, I think the majority of people thought it’d be good for us.”

Allen said well-connected “landed gentry,” who fox-hunted on parts of the property Disney purchased for the project, ginned up the opposition campaign that sunk the project.

A week or so before Disney announced that it would abandon its plan, about 2,500 to 3,000 people marched in protest in Washington against Disney’s America.

Instead of 3,300 homes, a shopping center, a Boy Scout camp and a hospital that were built on the site over subsequent years, “it would have been Disney’s America,” Allen said.

A few historians agreed to work with Disney, but some of the park’s strongest opponents were dozens of prominent historians, including David McCullough, James McPherson, John Hope Franklin and Shelby Foote. Ken Burns, who had directed a wildly popular PBS documentary about the Civil War several years earlier, also opposed the project.

Ayers said Disney officials had come to the University of Virginia, where he was working at the time, to gauge how historians there felt about the project. Ayers said they listened to their presentation but refused to give the project their blessing.

Ayers, who later became president of the University of Richmond, said the kitschy manner that seems to define how the Civil War is remembered today is a pet peeve of his. He said it often focuses more on myths and leaders instead of what caused the war and how the world would be different if the Confederacy won and slavery persisted.

“It’s not clear how you would use the context of a theme park to convey the awesome stakes of the Civil War,” he said of Disney. “They gave away the opportunity for innovation by imposing an entertainment model on history, rather than looking for the intrinsic drama of history.”

Even Allen knew this would be difficult for Disney to accomplish in the context of a theme park that hoped to draw as many customers as possible and make money.

When Allen was governor, he said, determining the Standards for Learning related to history exams for public school students was far more challenging than for other subjects.

“The history standards were the most difficult standards to get people to agree upon. Just to decide what is important for young people to know about history is a major debate,” he said. “And then what perspectives do you give to it? And then for Disney to make it entertaining is even more difficult.”

Around the same time Disney was advancing its plans, Coleman was dealing with a separate controversy at Colonial Williamsburg.

Originally hired as a teenage actor there, Coleman had later returned as director of African-American interpretations. In deciding to re-enact a slave auction, Coleman received letters and calls that criticized the idea as an inappropriate and ineffectual way to teach about slavery.

Coleman said it was one of the most difficult things she has done in her career, but it changed how people looked at historic places.

“I am of firm belief, based on letters we received and the actions that took place and the conversations that were had after, that the event opened the door for other historic sites that have this history as well to interpret,” she said.

As for Disney’s America, she said she felt “insulted” when Disney called her to ask if she would help advise them on their plans.

“The other thing that was crazy,” she added, “is that Virginia was willing to put up so much money to bring them here when [state officials] weren’t supporting arts and culture and museums that were already here.”

In his 1999 book, “Work in Progress,” Eisner devoted a chapter to Disney’s America and offered this reflection on the controversy:

“The issue was no longer who was right or wrong. We had lost the perception game,” he wrote. “Largely through our own missteps, the Walt Disney Co. had been effectively portrayed as an enemy of American history and a plunderer of sacred ground.”Eisner referred to Allen as Disney’s “staunchest and most effective supporter.”

For his part, Allen said recently that had Disney’s America been developed, he believes the company would have evolved over the years to be more inclusive in its presentation of American history.

He mentioned the recent re-opening of the American Civil War Museum in Richmond, which Coleman leads, as an example of how institutions have responded to changing sensibilities and a desire for more inclusion and authenticity.

Still, Allen said he is not sure a theme park should try to tackle weighty issues such as slavery. But he believed in Disney’s ability to innovate.

“If there’s a company that’s creative, there’s hardly a better one I can imagine,” he said.

While Disney might have been able to build a financially successful park, Ayers said he does not believe it ever could have been appropriate and honest.

“Innovation for its own sake is neither good nor bad,” he said. “But when it’s just using the past to make ourselves feel good—and Disney’s certainly in the business of making everybody feel good—then innovation can be a terrible idea.”