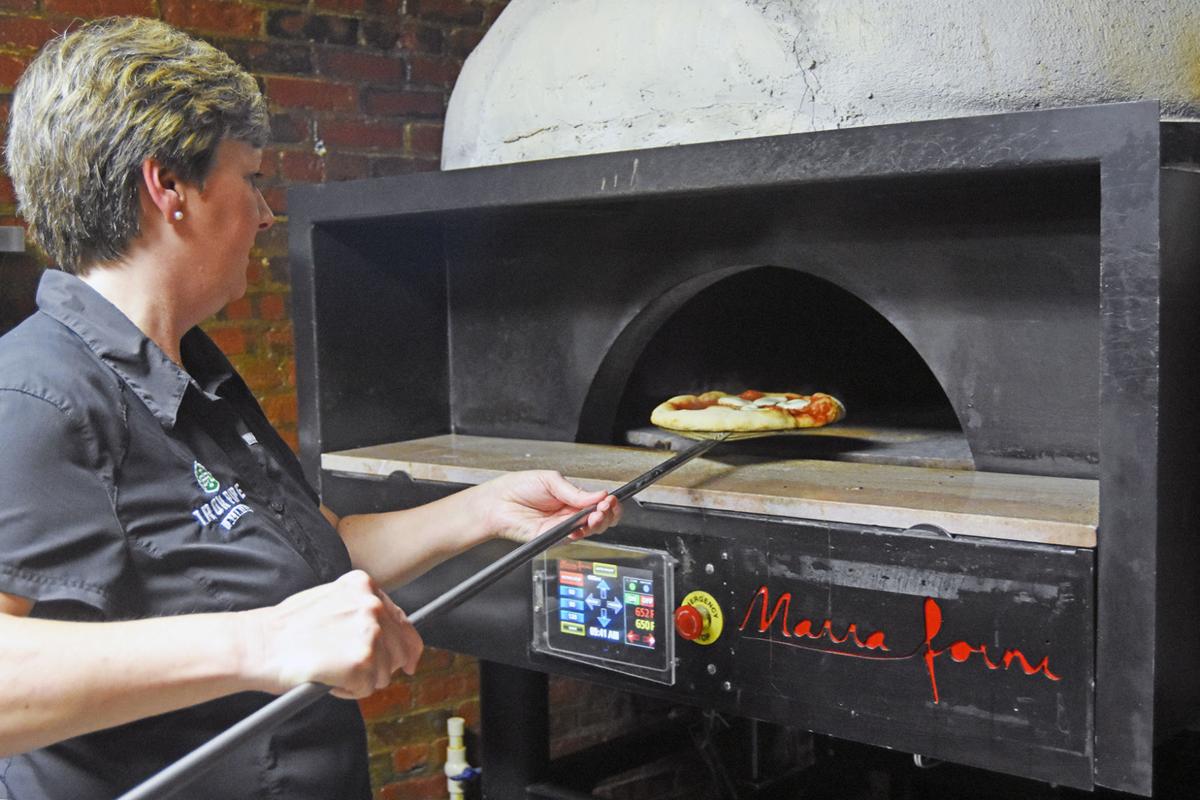 Pam Speelman takes a pizza out of the oven at Iron Pipe Alewerks. The 5,700-pound oven came from a defunct Northern Virginia eatery once owned by a former Washington Redskin. 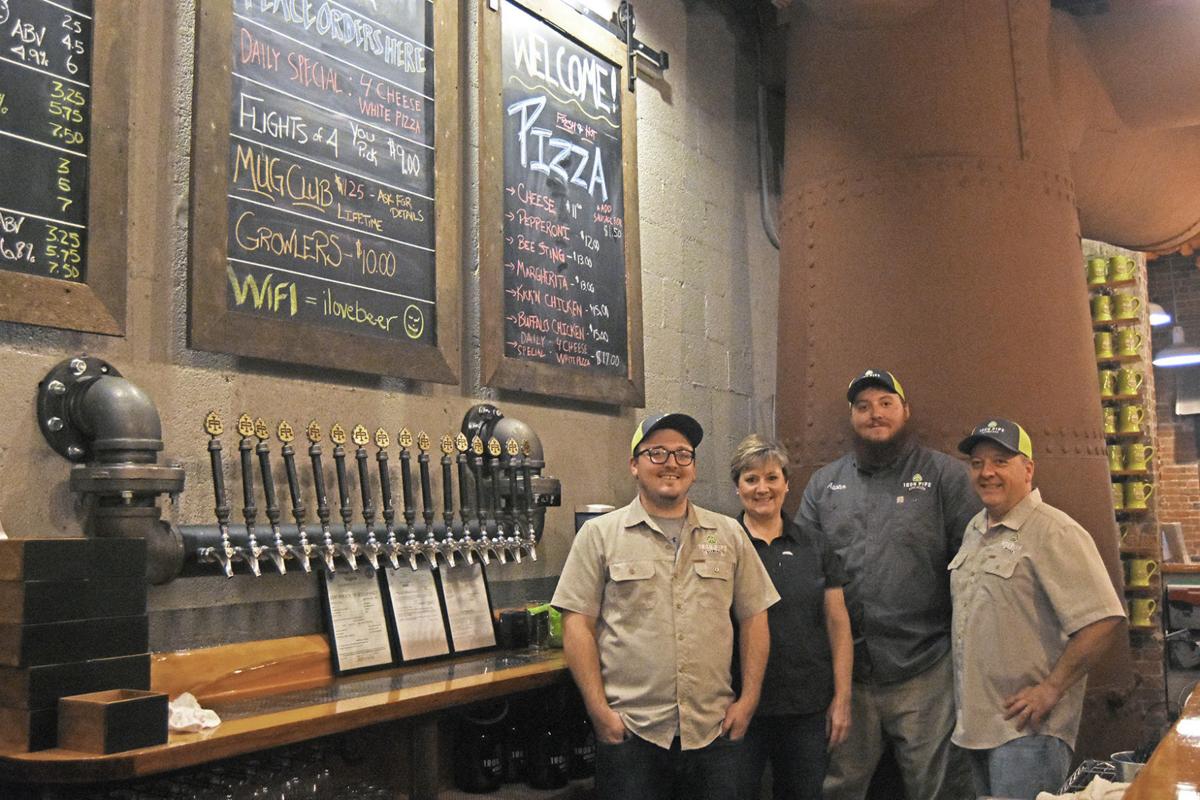 The Speelman family—from left, Zach, Pam, Austin and Steve—came up with the name Iron Pipe Alewerks from the old building’s pipes. 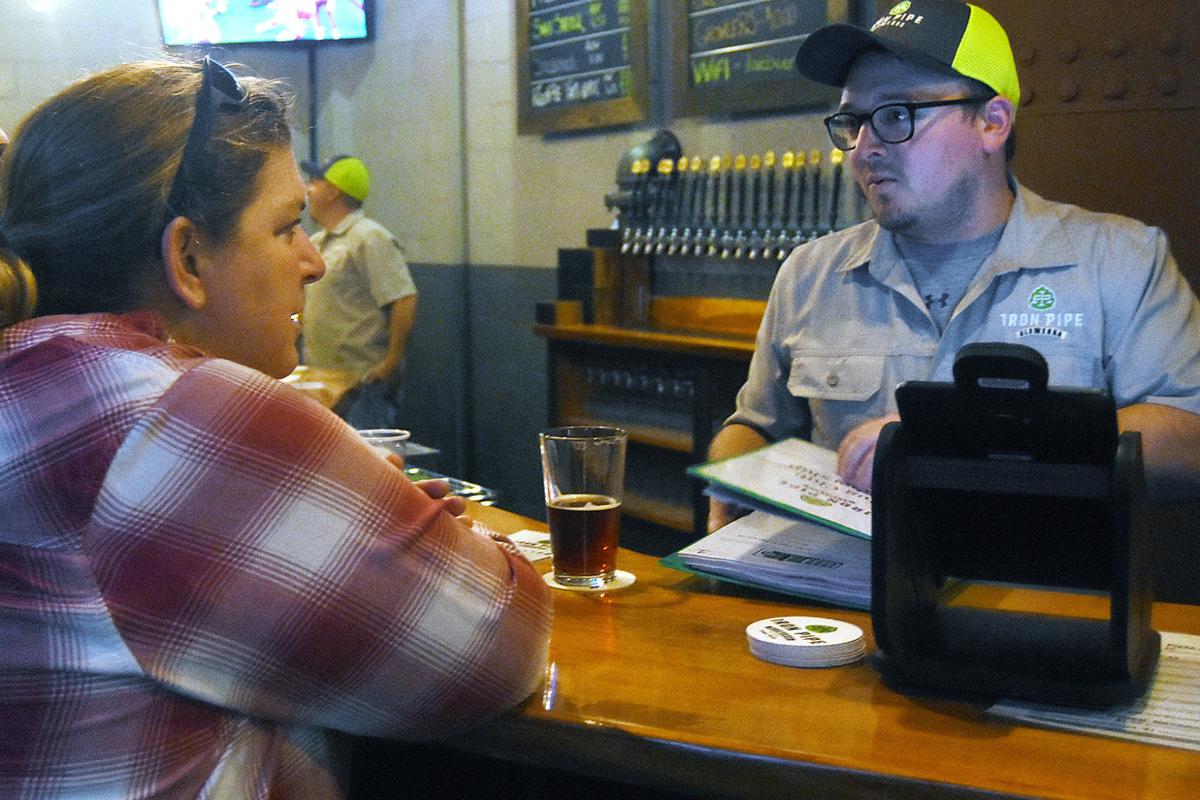 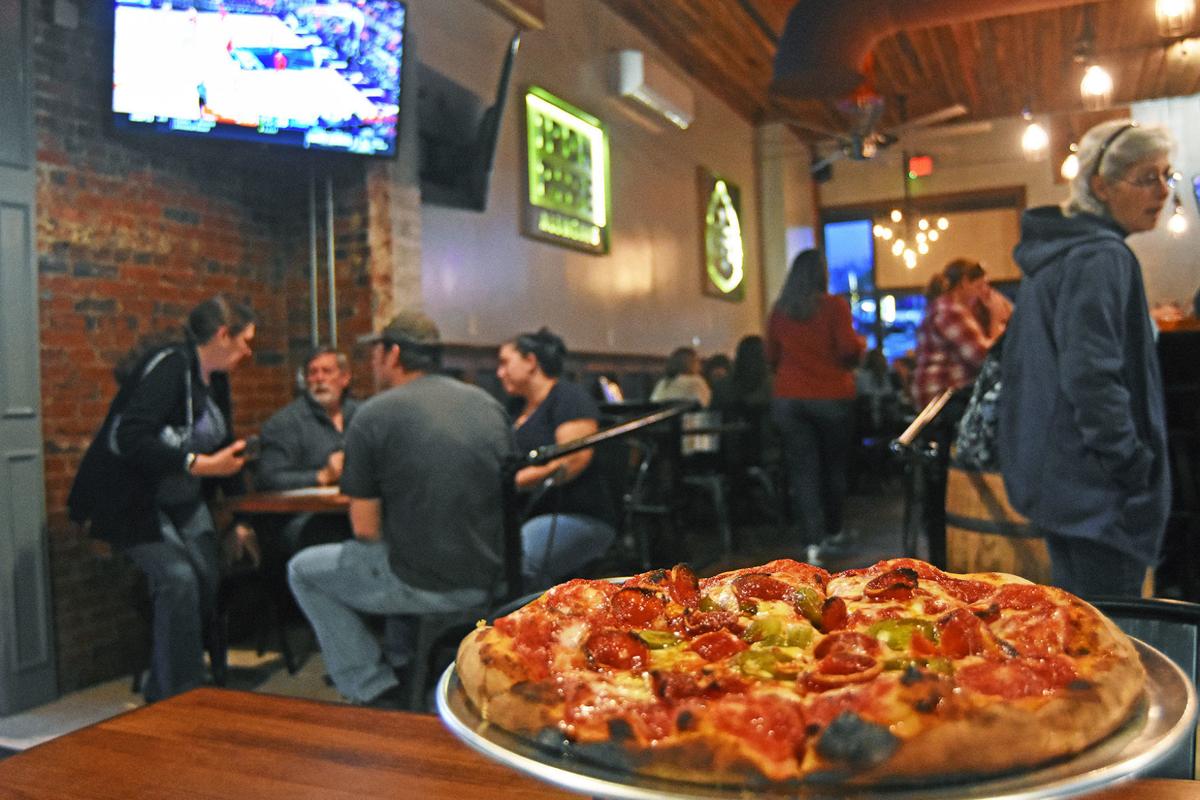 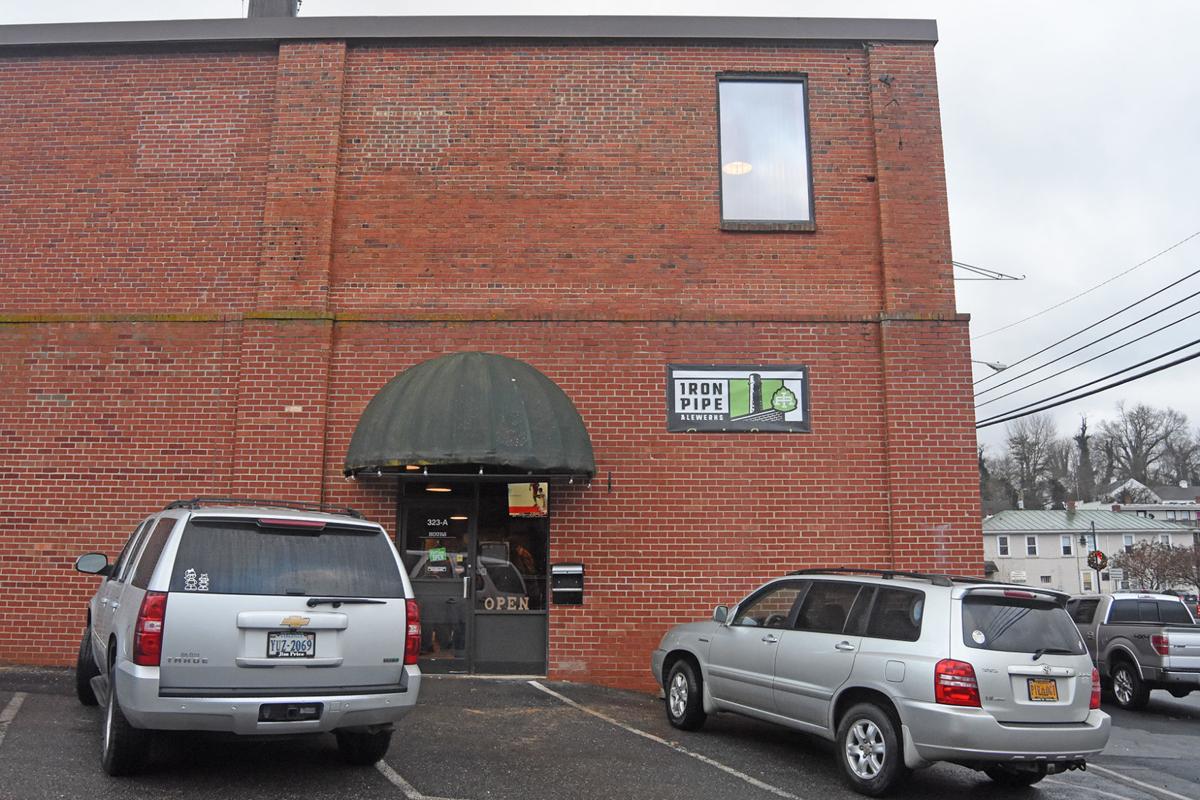 Iron Pipe Alewerks was recently opened by Steve Speelman and his family in the former silk mill in the town of Orange.

Pam Speelman takes a pizza out of the oven at Iron Pipe Alewerks. The 5,700-pound oven came from a defunct Northern Virginia eatery once owned by a former Washington Redskin.

The Speelman family—from left, Zach, Pam, Austin and Steve—came up with the name Iron Pipe Alewerks from the old building’s pipes.

Iron Pipe Alewerks was recently opened by Steve Speelman and his family in the former silk mill in the town of Orange.

Combine a former industrial building, one enthusiastic Culpeper family, a background in restaurant management and a talent for creating original brews and you have Iron Pipe Alewerks, one of the town of Orange’s newest business ventures.

With a bevy of brews, a convenient location and a 5,700-pound pizza oven—formerly belonging to a Washington Redskins wide receiver—the Iron Pipe Alewerks recently has begun to fill a void in Orange’s commercial community.

Located at 323-A North James Madison Road on the north side of the former silk mill in Orange, Iron Pipe takes its name from the formidable pipeworks that still connect to a functioning boiler in the former industrial building.

“It’s bolted down to the floor, and it protrudes up out of the ceiling,” said Zach Speelman, the full-time brewer at the newly opened pub and pizza house. “It’s still connected to the boiler, which is just behind the wall. It’s still functioning, so we figured, ‘If you can’t beat it, join it.’ ”

Speelman also pointed out that the initials of Iron Pipe Alewerks (IPA) are also fitting for a brewpub.

A 2008 graduate of Culpeper County High School, Speelman said Iron Pipe opened quietly in mid-December after two years of planning, experimenting with brews and hard work renovating the space that now houses the brewery and alehouse.

“My father has always wanted to own a restaurant—he used to manage the Country Cookin’ restaurants in the area when he was younger—and I have been working in breweries for the past four years, so we started talking about opening a place,” Speelman said.

Speelman said his father, Steve Speelman, acquired a small brick pizza oven and began experimenting with a recipe that would become his signature dough, while Zach spent his time creating home brews for his family and friends to sample.

About a year ago, the Speelmans found the former silk mill location and began renovation work to transform the space into its current configuration.

“Someone else had looked at it and drafted plans to use it as a brewery,” Zach Speelman said. ”We took this and kind of tweaked them a little to fit what we wanted to do. This used to be a commercial laundry, so we had to do a lot of work to get it ready.”

Now, the business has opened to what he characterized as very positive feedback.

“It’s pretty much all been good,” he said. “A lot of people say that Orange really needs a place like this.”

Zach’s younger brother, Austin, and his mother, Pam, are also helping run the family business, which is currently open Fridays, Saturdays and Sundays.

Steve said he was lucky to come across the used revolving pizza oven, which was in a Northern Virginia restaurant owned by former Washington Redskins player Pierre Garcon. The sizable piece of equipment was left behind when the business closed, and the building’s owner wanted it gone.

The oven runs at temperatures in excess of 600 degrees, and is used to cook Steve’s original creations, such as the Bee Sting, which features hand-stretched dough topped with San Marzano tomato sauce, pepperoni, jalapeño peppers and a drizzle of honey.

“One of the things that makes the dough unique is we make it with Zach’s beer,” Steve said.

While Zach works full-time during the week to brew Iron Pipe’s beers on-site, Steve and the rest of the family maintain their full-time careers. Steve works as director of information technology at a local hospital, Pam is a real estate agent and Austin is assistant superintendent at a local country club, and assistant lacrosse coach at Eastern View High School.

“I think working here is great,” Austin said, although he admits he has a busy schedule these days. “You get to hang out, meet new people and talk to everybody.”

Austin added that working with his brother is a good thing as well.

“Now that the boys are grown, it’s good to be able to spend time together,” she said.

Jen Batja, Zach’s fiancé, will be joining the team to oversee future marketing and social media strategies for the business.

Pam said most of the family lives along the U.S. 15 corridor in Culpeper County, about 15 minutes from the brewery.

Other plans for the future include installing a patio and games outside for when warmer weather returns, providing live music, hosting trivia contests and, in the longer term, expanding the menu.

“We’re operating under a pub license right now,” Zach said. “Our goal is to get a restaurant license so we can do things like wings, steaks and lasagna, and also move into serving cider and wine.”

“We have two light beers, two malty beers, two hoppy beers and one dark beer,” he said. “I wanted to make sure we covered the range of styles so that we have something everybody could enjoy.”

Zach said beer pretty much consists of water, barley, hops and yeast. How the ingredients are treated, combined, heated and stored determines the taste and character of the final product.

Zach said, even though the pub has been operating for only about five weeks now, the word is getting out and the weekends have been busy.

So far, the Speelmans have had visitors from throughout the area, including some from Fredericksburg and Charlottesville.

“We’re slammed on Fridays,” he said, a fact that has necessitated hiring a part-time dish washer and putting several family friends to work getting the pizzas made, cooked and served.

Zach noted that the business does offer root beer and indoor games for their younger guests. There are also several televisions, which are normally devoted to sports broadcasts.

“What we’ve wanted to do from the get-go is create an experience for our customers,” Zach said. “Have a nice space, make good food, brew good beer and create a nice family atmosphere.”