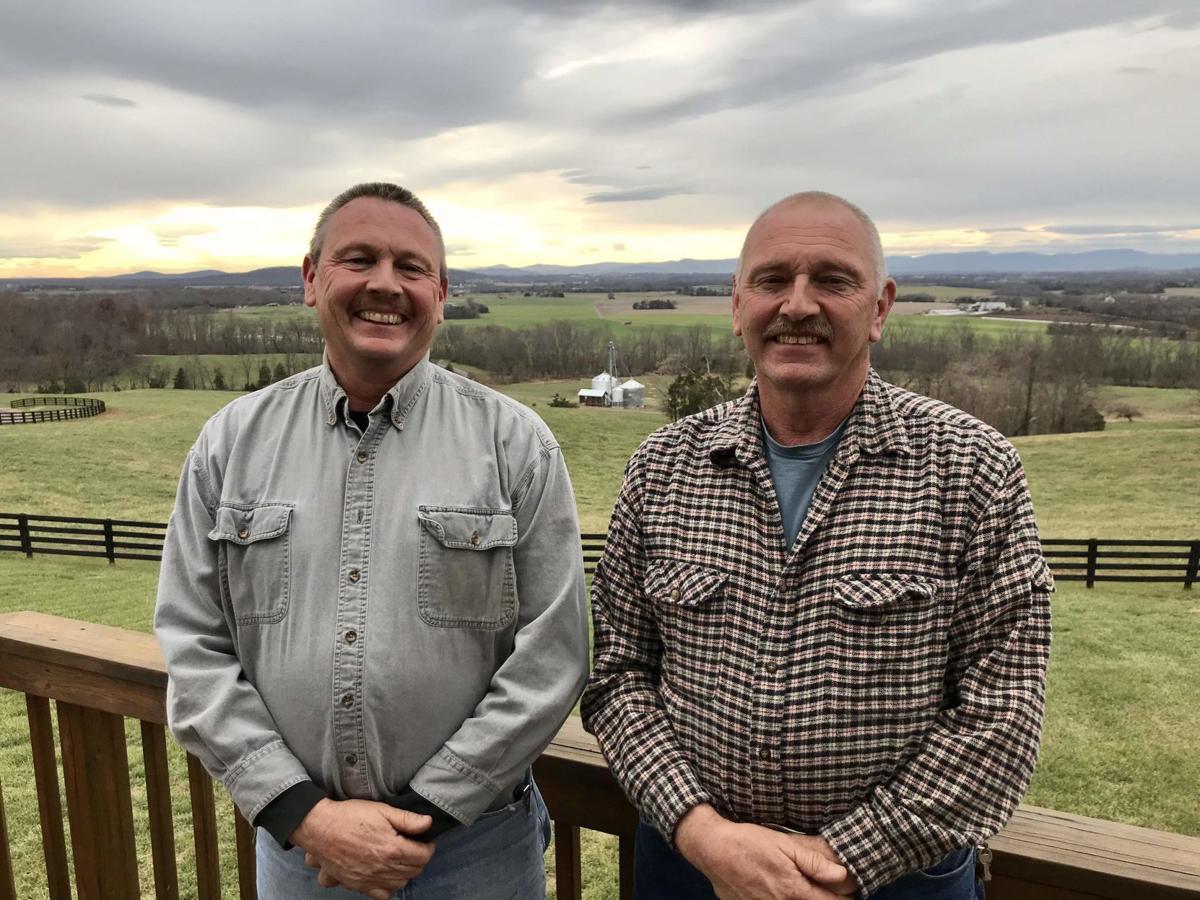 Dennis (left) and William Brown pose for a portrait on the deck of Dennis’s house atop Cole’s Hill, overlooking Pony Mountain and the Blue Ridge. 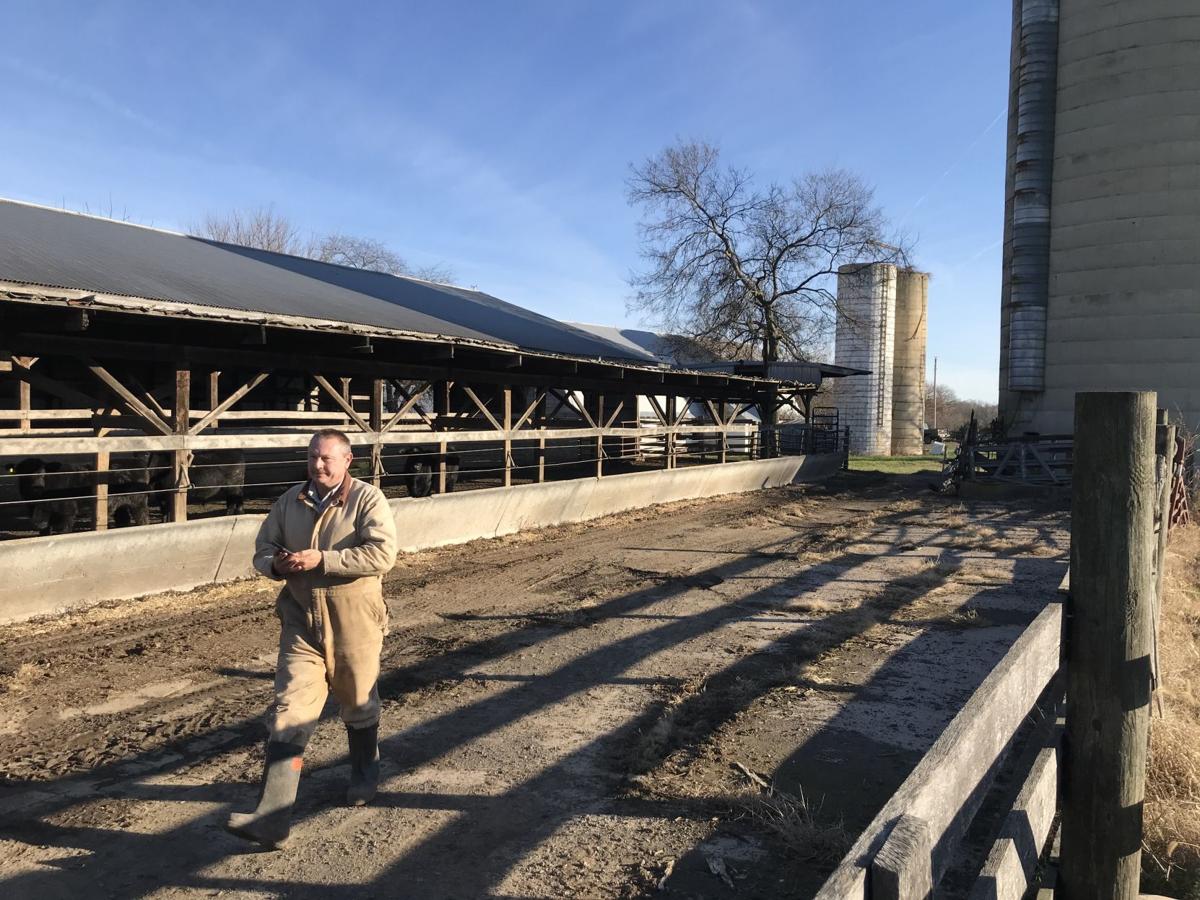 At the old Bunch farm on Carrico Mill Road, Dennis Brown prepares to feed one of his beef-cattle groups Saturday morning. 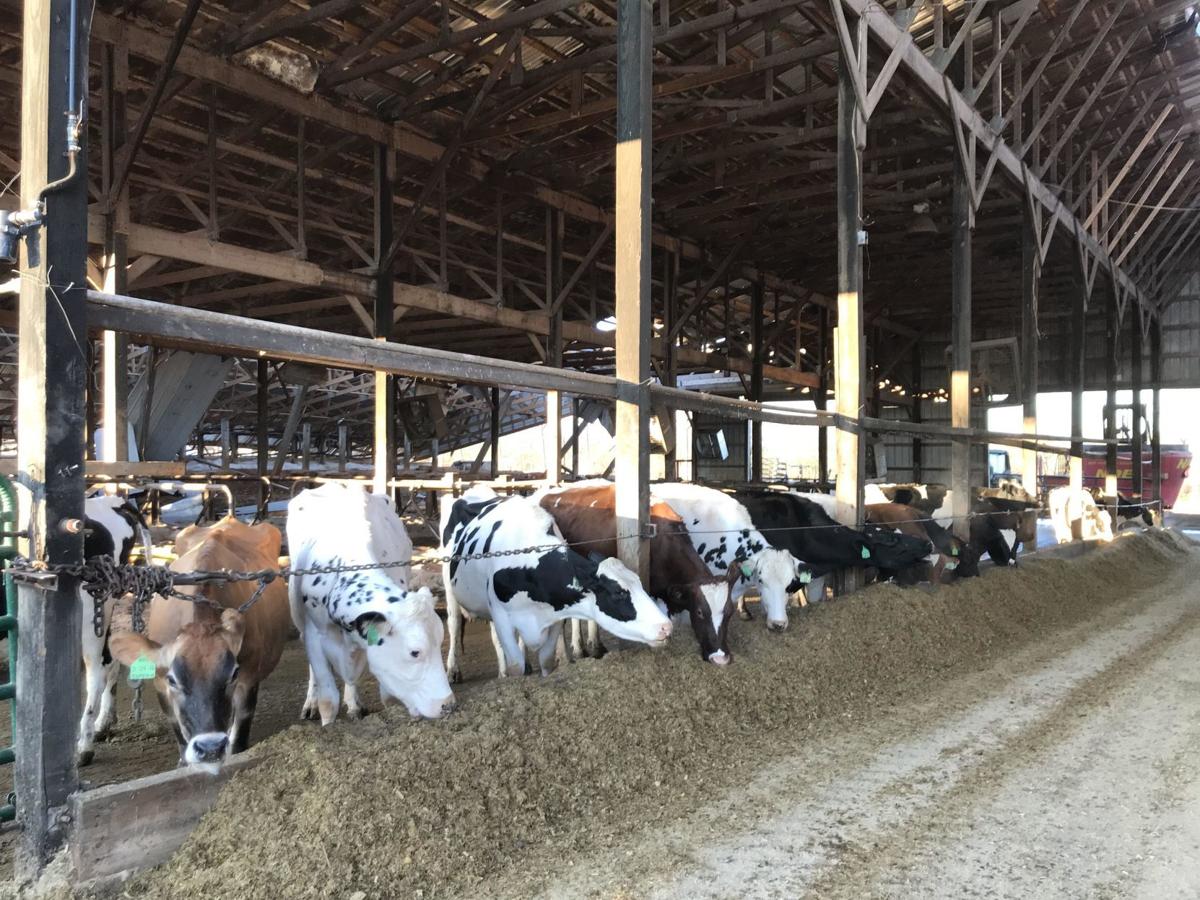 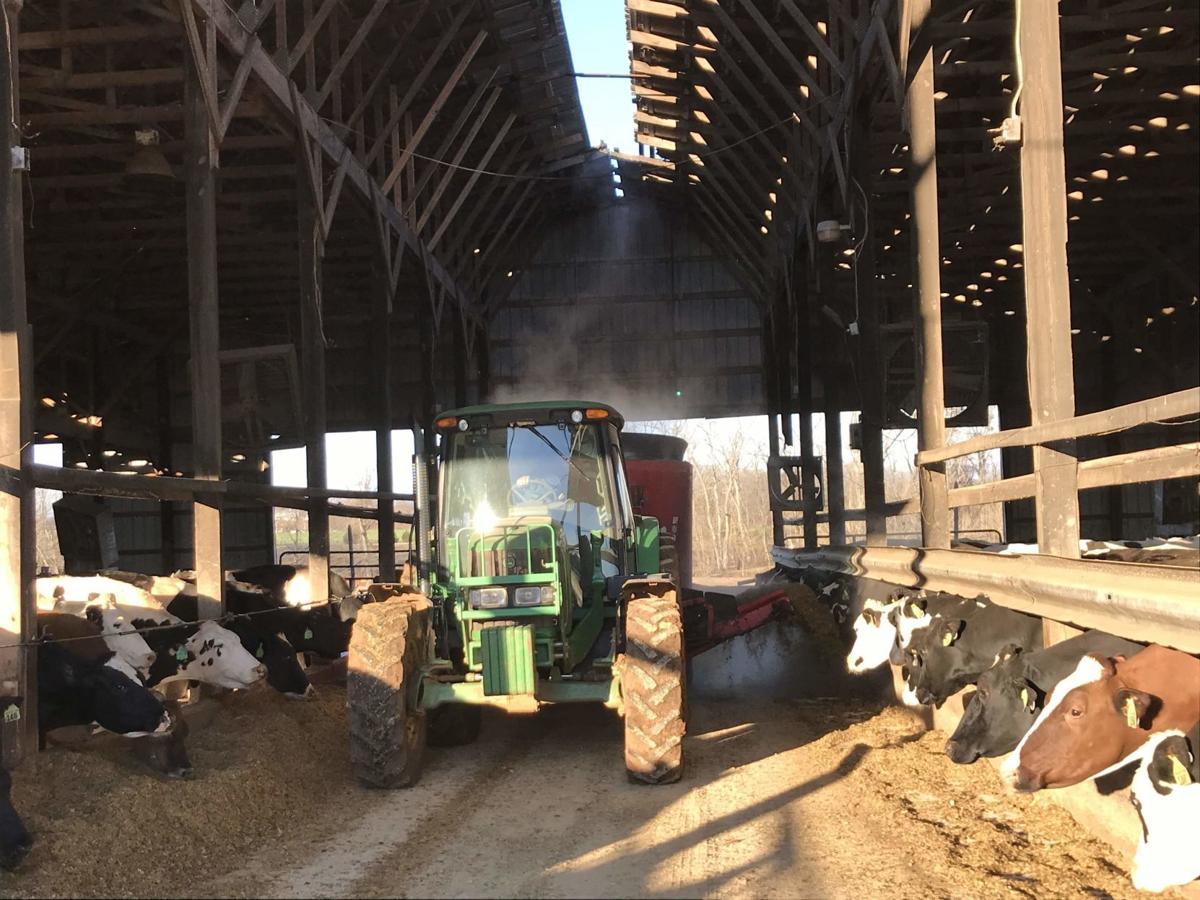 Driving a tractor and operating a mixer, Billy Brown feeds his dairy herd Saturday morning at his farm, the family's homeplace on Cole's Hill.

Dennis (left) and William Brown pose for a portrait on the deck of Dennis’s house atop Cole’s Hill, overlooking Pony Mountain and the Blue Ridge.

At the old Bunch farm on Carrico Mill Road, Dennis Brown prepares to feed one of his beef-cattle groups Saturday morning.

Driving a tractor and operating a mixer, Billy Brown feeds his dairy herd Saturday morning at his farm, the family's homeplace on Cole's Hill.

In the 86 years that Culpeper County’s Brown family has been farming near Stevensburg, it has weathered some tough times. Experiences that would have broken others, or persuaded them to give up on agriculture as a way of life.

But not Dennis and William Brown, or their late father, W.E. Brown Jr. They just kept on.

The brothers just laugh about the trials and misfortunes that fate has tossed their way.

Those qualities, and their accomplishments in dairy, beef and crops at Cole’s Hill Farm, earned Dennis and Billy the Culpeper County Chamber of Commerce’s 2019 Agribusiness of the Year Award.

In honoring the Browns during its 105th annual awards on Nov. 7, the chamber lauded the brothers for demonstrating “the value of hard work, integrity, accountability, innovation, passion, family and community.”

“Dennis and Billy Brown work together every day, they share equipment, they share knowledge, they share labor and land,” he said Friday. “They come to the aid of each other in time of need. ... Not all brothers work so well together.”

Both men share a keen awareness of and attentiveness to their cattle and dairy cows, Stafford said.

Both men are modest, and shy amidst a big group, so family members had to strongly encourage Billy, the oldest, to rise to accept the award in front of the 300 people attending the chamber’s formal banquet. He said a few words, then sat down.

“Those were the longest 10 seconds of my life,” Billy joked to a reporter weeks afterward.

But the Browns have been through a lot worse.

He was a third-generation dairy farmer. William is now the fourth generation to milk cows at the north end of Hansbrough’s Ridge. He hopes his son, Bill, will be the fifth generation to do so.

Because of a couple of bad financial decisions and dairying’s general decline, the family had to declare bankruptcy. They lost the farm, which was actually a collection of farms that their father had assembled.

The long commute and the nature of the work just made him miss farming all the more.

So, with the passage of a little time, the brothers started over, from scratch.

In 1993, William was able to buy back Cole’s Hill Farm, and started milking again with about 160 cows.

Dennis took over his father’s rental acreage and started planting crops, as well as crops for Billy’s dairy herd. He bought 200 beef cows, and now specializes in “backgrounding” cattle—growing of steers and heifers from weaning until they’re shipped to a feedlot for finishing, before slaughter.

Today, the brothers each have their own farm on adjoining properties, but work in tandem.

Dennis recently built a beautiful home on “the top of the hill,” near the crest of Cole’s Hill, with gorgeous views of the Blue Ridge to the west, Clark’s Mountain and Twin Mountains to the south, and Fauquier County’s monadnocks, or isolated mountains, to the north.

Billy’s adjoining farm is centered on what they call “the homeplace,” the land where their father built a small home, and both men were raised.

William, has 200 milking cows, and runs one of the last three dairies to survive in the county, which used to be known as one of Virginia’s dairying havens.

Decades ago, butter from Cole’s Hill Farm was sold under the trade name “Cold Hill.” A cousin recently found one of the old, hand-turned butter presses and gave it to Dennis and his wife, Stacey. They keep it, as a token of pride, in their home’s living room, along with a couple of heirloom milk cans from the family farm.

“I’m real happy about it,” Dennis said of their chamber award, before confiding that he wished they could have been recognized for their work before tragedy struck at the farm. And before their father died, so he could share in their joy.

But he and Billy and Stacey all expressed profound gratitude for how people came from near and far to help when an April 6, 2017, windstorm blew down five of their seven barns, toppled their grain elevator and shattered windows in Billy’s home.

“The storm came through, and then people just started showing up at our door,” Stacey said. “It was amazing.”

Their neighbors, friends, and the Culpeper community quickly came together to help.

“You think that no one cares about you, and nobody sees you,” Billy said. “But there are a lot of good people out there.”

People from all over turned out to walk their farm fields and clean up all metal shards from barn-roof tin sent flying by the storm’s fierce winds.

Mennonites in the Shenandoah Valley, near Harrisonburg, heard about the family’s plight and sent teams to raise a new barn. A lumberyard in Harrisburg bought all beams from their ruined barns. Billy managed to buy lumber at cost to build a new barn.

Then, just before Halloween this year, another storm toppled that brand-new barn, snapping its braces and support columns, and tilting its wreckage against a neighboring barn at Billy’s dairy.

Stafford, the extension agent, rued the incredible damage done to the Browns’ farms by the two storms.

“That’s devastating. It’s like the loss of a family member,” he said. “It was terrible—and heartbreaking to see their cattle scattered to the four corners of the farm.”

Today, Billy continues tending his dairy cows in the surviving barn, rising at 4 a.m. every day to milk them, and repeating the multi-hour chore in the evening, 365 days a year.

But the most difficult year of his life was when his father lost the farm, and he went a year without milking any cows, he said. Billy has been tending to a dairy herd since he was about 6 years old.

Stafford praised the Browns’ perseverance against the odds and the way they work together.

“They get along pretty good, and are always there for each other,” he said. “It could be compared to a good marriage.”

Throughout the holiday season, the Star-Exponent is publishing a series of articles highlighting winners of the 2019 Culpeper County Chamber of Commerce awards, announced at its 105th Annual Meeting in November.

The paper has already profiled Ed Dalrymple, recipient of the L.B. Henretty Outstanding Citizen Award—the chamber’s most prestigious honor—as well as the recipient of Nonprofit of the Year, Services to Abused Families Inc., or SAFE.

Throughout the holiday season, the Star-Exponent is publishing a series of articles highlighting winners of the 2019 Culpeper County Chamber of Commerce awards, announced at its 105th Annual Meeting in November.

The paper has already profiled Ed Dalrymple, recipient of the L.B. Henretty Outstanding Citizen Award—the chamber’s most prestigious honor—as well as the recipient of Nonprofit of the Year, Services to Abused Families Inc., or SAFE.

Agribusiness of the Year, Cole’s Hill Farm, is featured today.

Throughout the holiday season, the Star-Exponent is publishing a series of articles highlighting winners of the 2019 Culpeper County Chamber o…