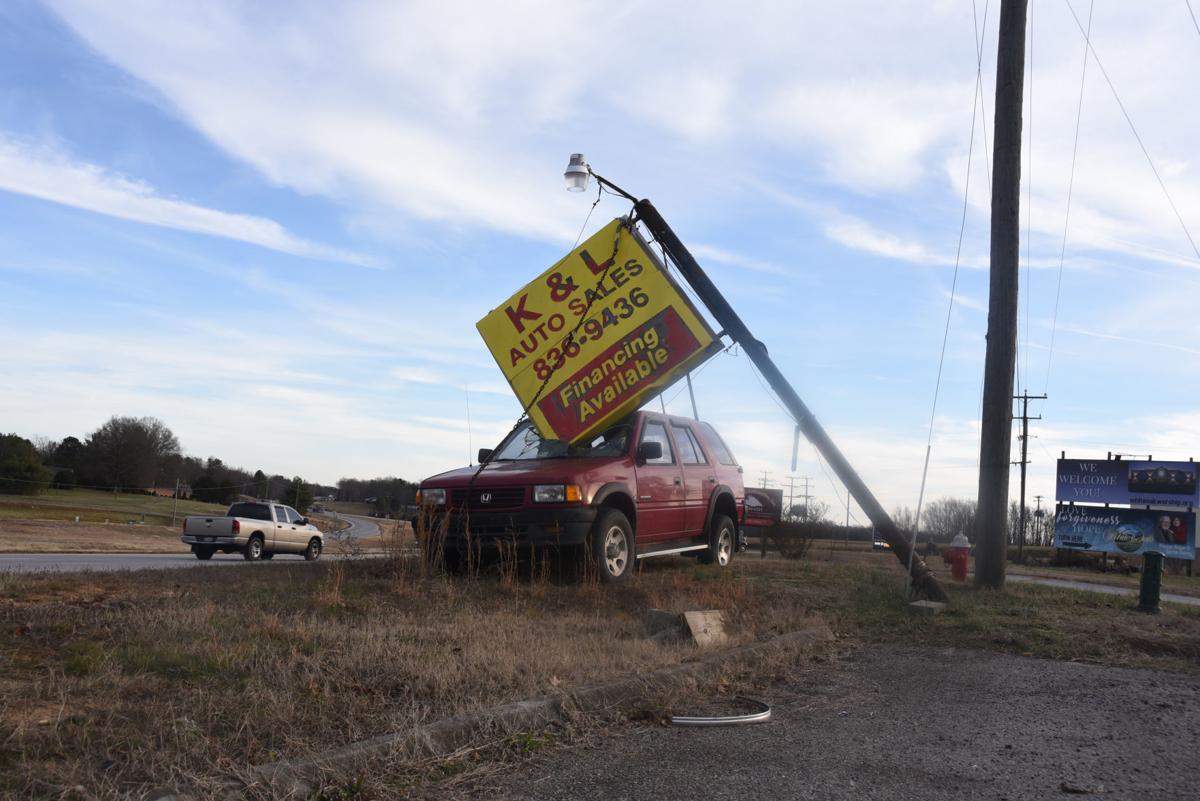 A storm in 2015 pushed the sign for K&L Auto Sales through the windshield of one of its cars. Thanks to some quick thinking, it is now an advertising tool. 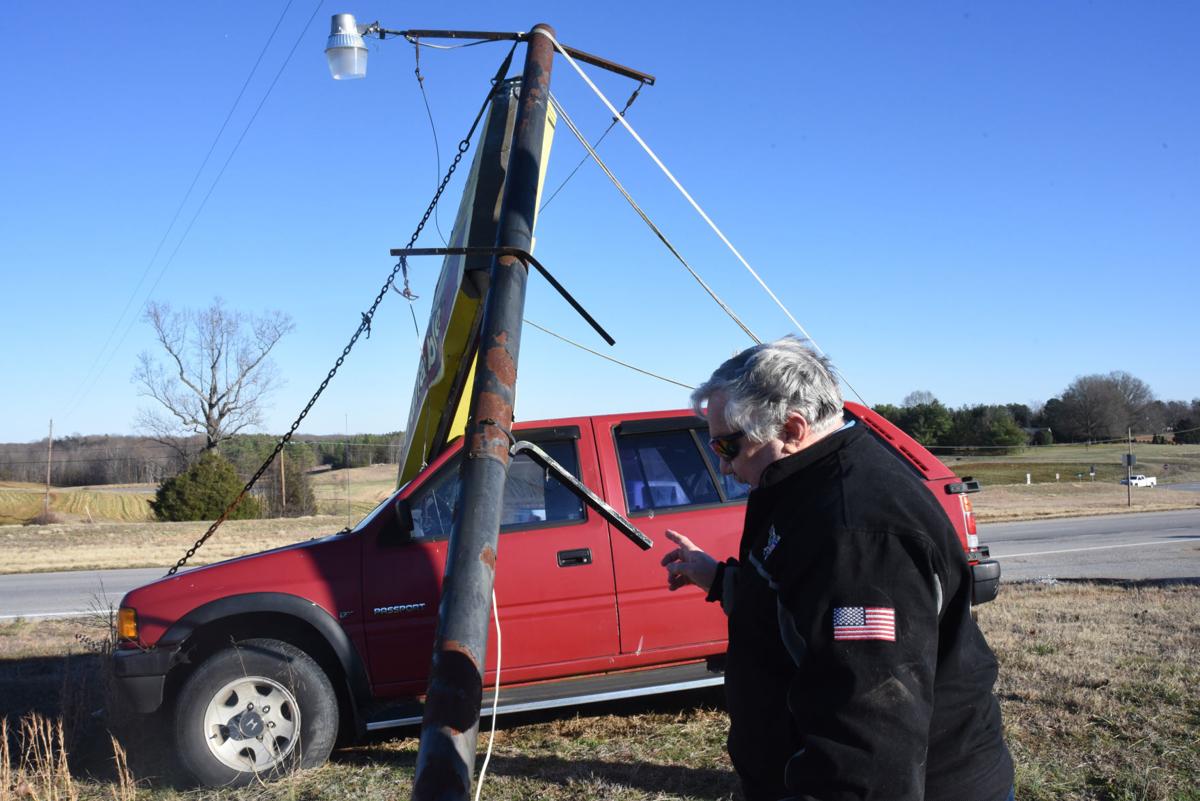 John Webster Jr., the general manager K&L Auto Sales, which has since moved further north on U.S. 29, explains that the only thing he did since the sign fell through the windshield is chain the pole and the car together to ensure that the sign doesn’t move again. 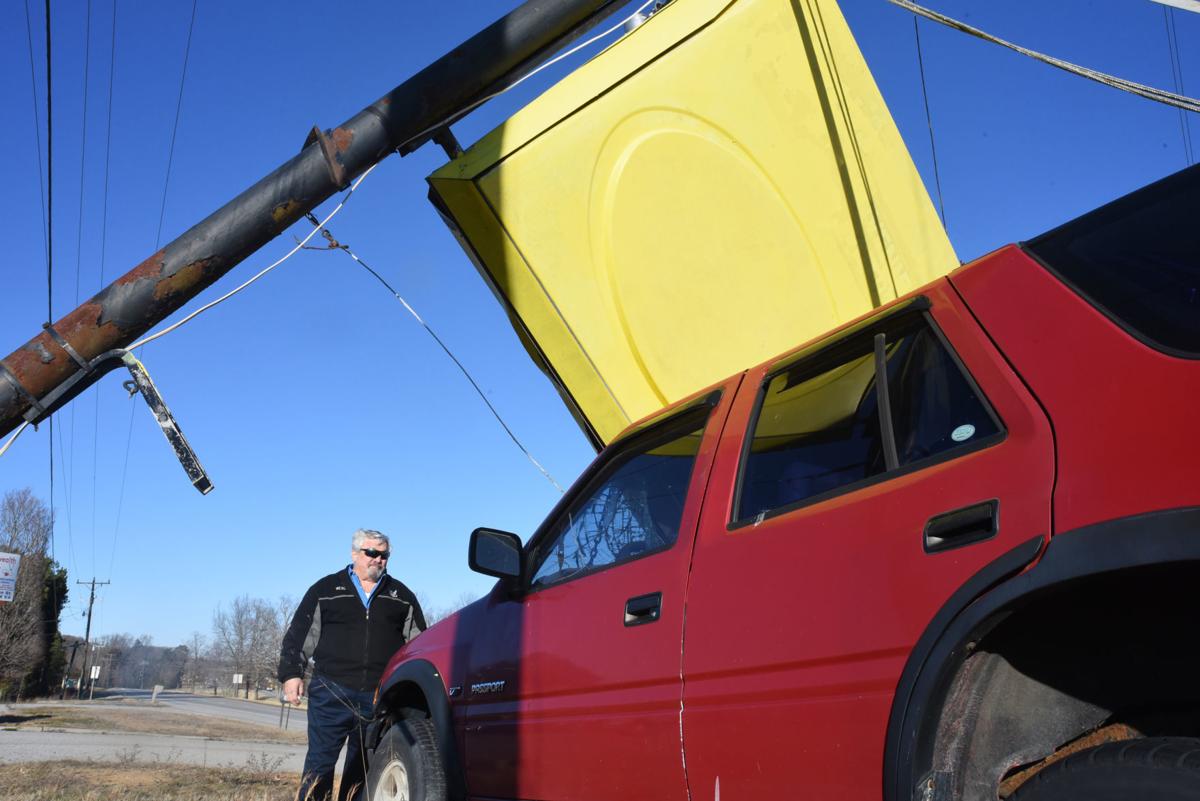 John Webster Jr., K&L’s general manager, says the toppled sign has become a landmark in the community. The sign is “a novelty,” he says.

A storm in 2015 pushed the sign for K&L Auto Sales through the windshield of one of its cars. Thanks to some quick thinking, it is now an advertising tool.

John Webster Jr., the general manager K&L Auto Sales, which has since moved further north on U.S. 29, explains that the only thing he did since the sign fell through the windshield is chain the pole and the car together to ensure that the sign doesn’t move again.

John Webster Jr., K&L’s general manager, says the toppled sign has become a landmark in the community. The sign is “a novelty,” he says.

BLAIRS — John Webster Jr., the general manager of K&L Auto Sales, played no part in imagining or creating what has been the best piece of marketing for the company. In fact, no human did.

In the summer of 2015, the simple, yellow sign with red lettering advertising K&L Auto Sales toppled over in a windstorm and smashed right through the windshield of a red 1997 Honda Passport, one of the many cars at the lot along U.S. 29, tucked in between White Oak Worship Center and the Danville Pittsylvania County Chamber of Commerce.

He hasn’t moved the car or the sign at the lot, which have turned into a sight that attracts both attention and customers.

As for the phenomenon that created the landmark, Ben Gruver, a meteorologist with the National Weather Service in Blacksburg, said there were multiple reports throughout Pittsylvania County between Gretna and the Dry Fork area of downed and uprooted trees on the day of June 17, 2015.

“It was a line or cluster of storms that pushed through the county,” he said.

While there is no record indicating the exact speed of the straight-line winds, which didn’t make it all the way to Danville, Gruver said there is generally a certain threshold before serious damage like that starts to occur.

“Really you start to see more widespread damage when you get up to that 60 to 70 mph range,” he said.

As a result of those straight-line winds that day, which Webster thinks approached 80 mph, the pole was severed near the foundation and toppled downward. It came to a halt as the sign for the store smashed through the windshield of the Passport — the still-functioning light illuminating both the car and the sign.

An employee who happened to be driving by snapped a picture and sent it to Webster. When he arrived the next morning, he realized that the sign should stay.

Scott Sherman, an advertising professor in Virginia Commonwealth University’s Richard T. Robertson School of Media and Culture with decades of experience in the advertising industry, explained that since there are so many retail signs, people have become very good at ignoring them.

“There are several goals for signs [and other forms of branded communications], and one of the goals is to get the audience’s attention,” he said. “This sign does that.”

While having something unusual and unexpected works to gain attention, that doesn’t always mean that it is effective advertising, Sherman said, especially if there isn’t a positive brand message included in the unexpected. He referenced a sign for a personal injury law firm in Richmond that appears to have been smashed by a car, which simultaneously grabs attention and reinforces what the law firm does.

Webster’s sign, on the other hand, almost promotes the opposite message of what his car lot is shooting for. Instead of showing a nice, beautiful car, a vehicle with a smashed-in windshield and flat tires has served as the poster for the car lot.

Rajesh Bagchi, the head of Virginia Tech’s marketing program, said consumers may make all sort of inferences, some positive, some negative, from an attention-grabbing sign like this.

Some, he said, will find this is amusing and creative, increasing their likelihood of purchasing from the company; others could end up transferring their perceptions of the smashed car and fallen sign to the rest of the vehicles and the owner.

“I feel if they can manage the last possibility and assuage any concerns regarding quality, then this sign should help them as it will draw more consumers who will feel that the owner is a creative individual who is trying to engage the community in a light-hearted manner and share some laughs in the process,” he said.

Webster said he never would have thought to do something like that on purpose — especially since the car, with over 157,000 miles on it, was selling for $3,000 at the time — but he thinks that the freak accident has led to many multiples of that number in sales.

“That increases the business so much. It’s a novelty,” he said.

Over the years, he said many people have stopped simply to ask about the sign, but then ended up buying a car from him.

Webster doesn’t do any marketing now, as he has built a loyal client base in the community and is frequently referred by his customers.

The lot next to the sign is mostly empty today, as Webster is remodeling the building to serve as a service center for his car lot, which he moved farther north on U.S. 29 within the past few years. He now has two options that he is seriously considering: starting a second car lot where the sign is, or moving both the sign and the car to his new location.