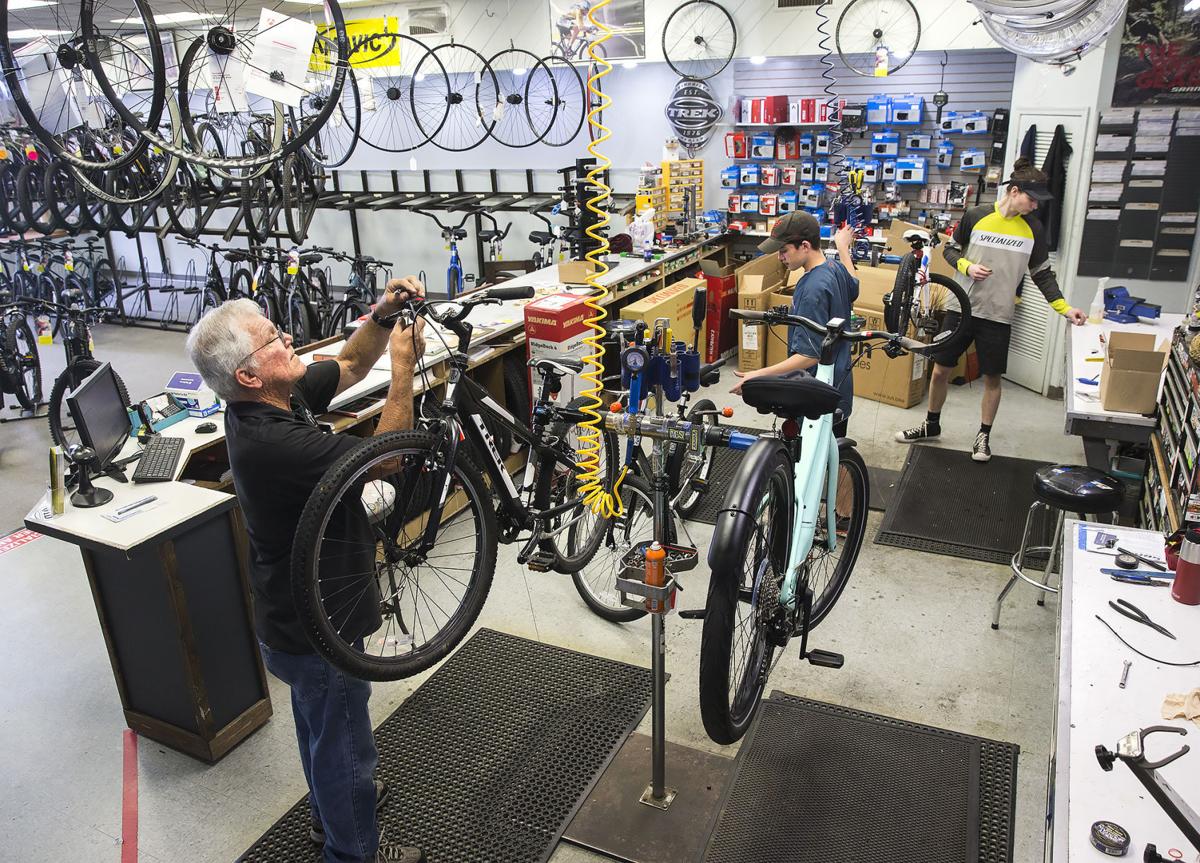 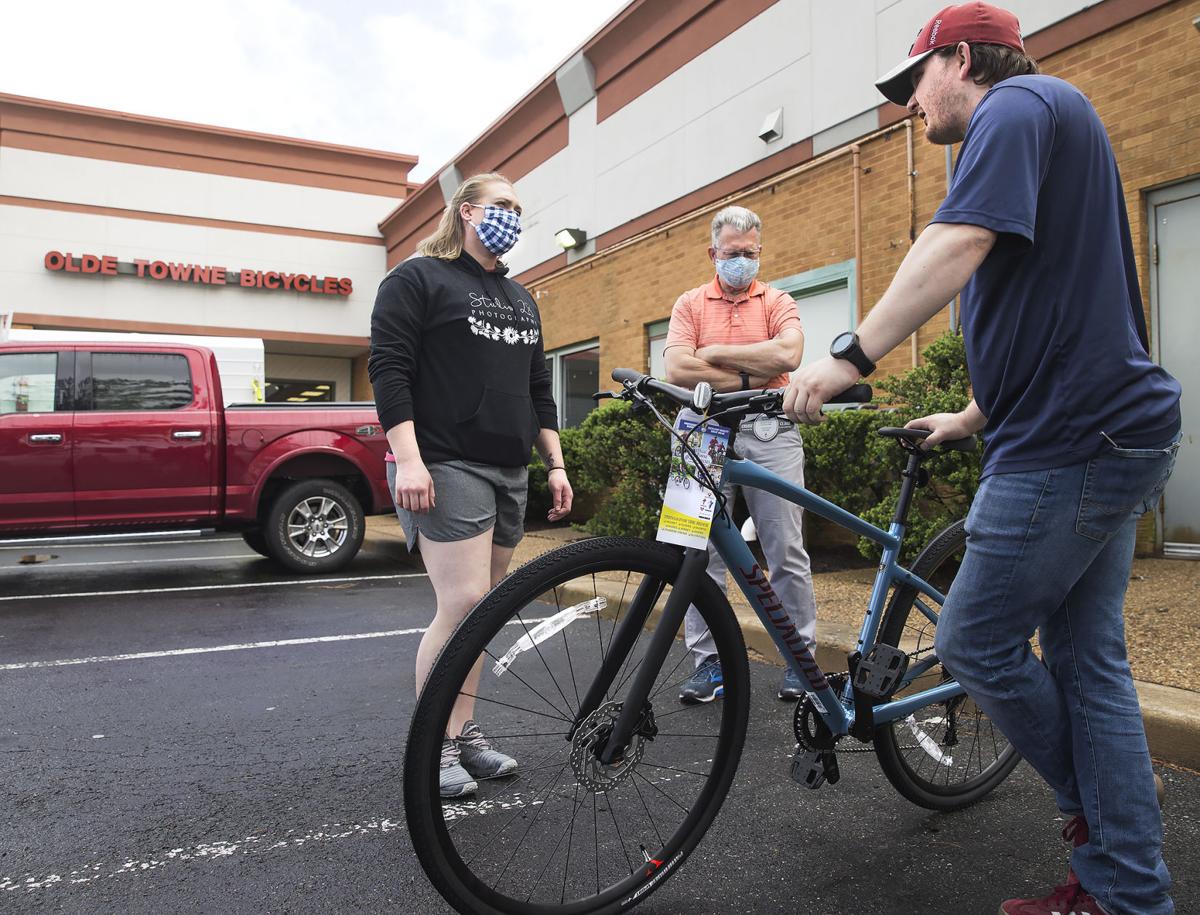 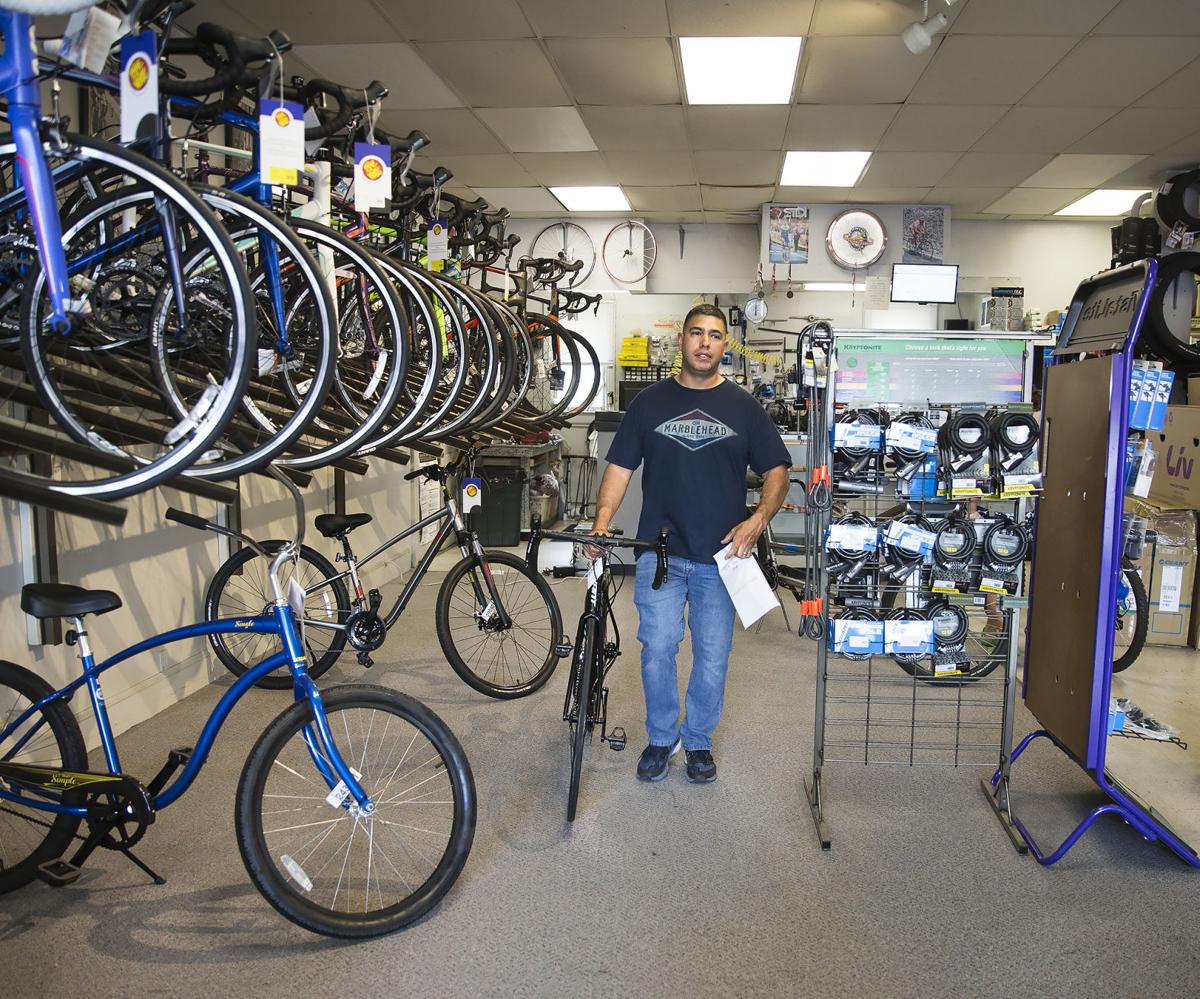 Donald McClester leaves Bike Works in Fredericksburg with a new ride May 22.

Donald McClester leaves Bike Works in Fredericksburg with a new ride May 22.

Dan Murphy, who operates Olde Towne Bicycles stores in Fredericksburg and Woodbridge alongside his family, said the coronavirus has brought an unexpected boost to the bike business.

“It was like a door opened and something new started happening,” he said, noting that families who couldn’t go to work, school or gyms turned to cycling as a way to fill time and exercise.

“It spread like wildfire and we suddenly were doing a month’s worth of business in a week,” he said.

First, he said, big-box stores started selling out of children’s and inexpensive bikes for adults. Soon enough, customers sought out “every place they could buy any kind of bicycle,” he said.

“Our stores’ inventory of bicycles selling for under $800 quickly started to evaporate,” he said.

Other area bike stores have experienced similar heightened demand, and report that though supply chains are slowly starting to catch up, stocks of lower-end bicycles are well below where they would normally be this time of year.

Andre Randolph, manager of the Bike Works store in downtown Fredericksburg, said things have been busier than usual.

“The lower-end segment is pretty much gone right now from most bicycle and department stores,” he said.

He thinks the demand is coming from people whose lives have been changed by the pandemic.

“Lots of customers who came in were looking for inexpensive bicycles to get exercise and ride with their kids. It has made it very difficult to get those lower-end bikes,” Randolph said.

“We’re almost out of all hybrids, and have sold pretty much every bike we have under $1,000,” he said. “It started in April and has carried through into May.”

Harris said customers are coming from every walk of life.

“I think it’s just about everybody: whole families who want to ride together, adults who are looking for an alternative to going to the gym,” he said, “as well as returning customers who were looking for new bikes or had service work because getting out and riding was suddenly more important to them.”

A recent Washington Post story noted that the $54 billion global bicycle market, which grew 6.9 percent last year, should see some road-bike categories shoot up 35 percent this year, according to WinterGreen Research.

The research firm reported that before the pandemic, the industry was mostly stagnant, with battery-powered e-bikes and gravel bikes showing growth, but sales of traditional road bikes falling.

The higher-then-normal sales of bicycles is happening at a time when consumers have heightened concerns about going into stores because of the virus.

To deal with that, local shops say they are following special protocols to keep customers and staff safe, ranging from limiting the number of customers in stores to contactless payment to curbside pickup and delivery of new bicycles and bicycles brought in for repairs. Masks and increased sanitation are also part of the new operating procedures.

And despite concerns that have kept customers away from many retailers, bicycle shops—considered essential services and allowed to stay open during the state stay-at-home order—have seen business boom.

Murphy’s Fredericksburg store closed for a week early on in an effort to keep everyone safe, but he said it became difficult to stay that way.

“Even though we were closed, we were coming in to take deliveries and make good on orders we had up to that point,” he said. “People were banging on the door or calling people they knew on staff to see if there was any way they could buy a bike or get one repaired so they could get out and ride.”

Though none of the shops contacted gave exact numbers on numbers of bikes sold, Murphy said the two Olde Towne locations have sold hundreds of bicycles since the pandemic hit and the company has ordered more than 300 additional bikes.

“Both stores are easily doing double business,” he said. “There really is no more inventory right now. Things subsided a little after the first push, but we ended up doing a normal May’s business in the first 10 days of that month.

“Demand hasn’t really dropped off,” he added. “It’s just driven now by inventory. I think eventually the suppliers will catch up.”

Randolph at Bike Works said it didn’t help that manufacturers in Asia—like Giant Manufacturing in Taiwan, which makes the bicycles that are their predominant line—were shut down for three months because of the pandemic.

“What we’re seeing on our end is difficulties getting lower-end bicycles and even repair parts for the more inexpensive bikes,” he said. “But the supply is starting to come back a bit. Giant is doing a pretty good job trickling bicycles into the supply stream as they get them.

“We are definitely ahead of where we’d normally be for this time of year,” he added, “but I wouldn’t say drastically ahead.”

Harris at the Trek bike store said he and his staff have put in some long hours trying to keep up with surging demand.

“I get the impression that many of the customers during this time have been new to cycling, dipping their toes into the water for the first time,” he said. “It’s a good thing for our business, but also a great thing for the folks who are buying bicycles. I’m happy to see the number of people on the trails and bike paths growing. Riding keeps people healthy and promotes mental health and it’s a lot of fun.”